Why did you make this work:
The Politico commissioned a piece for an article about ‘U.S. 5G Failures and the Future of American Innovation’. It mainly talks about the US doesn’t have a rival toward Huawei, and it should. The article says it because of 20 years of failure by the government to act on the part of American companies.

How was the illustration used:
This illustration was used on the online news page of the POLITICO on Feburary 25, 2020. At that time, the confrontation between the U.S., Europe and China was not revealed, so I think it was a sign of what would happen later.

How did you make this work:
In partnership with Erin Aulov Of the POLITICO, we aimed to capture the anxious tone through composition and shadows between the cell tower which represents China’s 5G infrastructure and the man which represents that of Europe and the US. By putting the vivid color on the Chines flag and limited, muted color on other parts, I tried to stand out the subject of this article.

Biography:
After graduation from Kookmin University, Seoul majoring in graphic design, JiYeun Kang worked as a designer for 6years. Since 2014, she has been working as an illustrator and since 2019, internationally represented by the AnnaGoodson illustration agency. She worked with clients like the Boston Globe, POLITICO, Allure NY. She is also on the MA illustration course in the Falmouth University now. 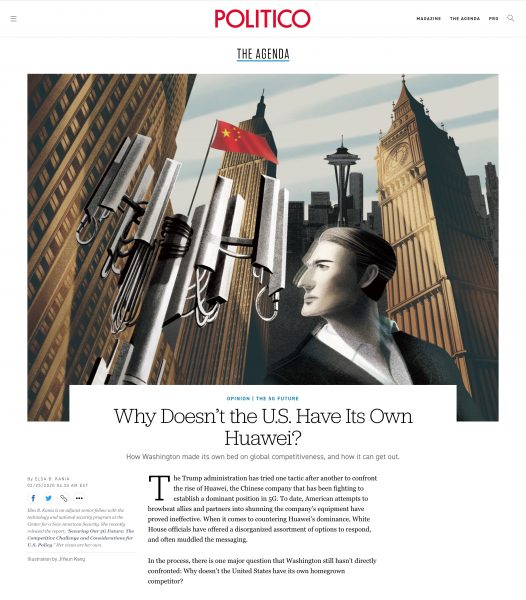