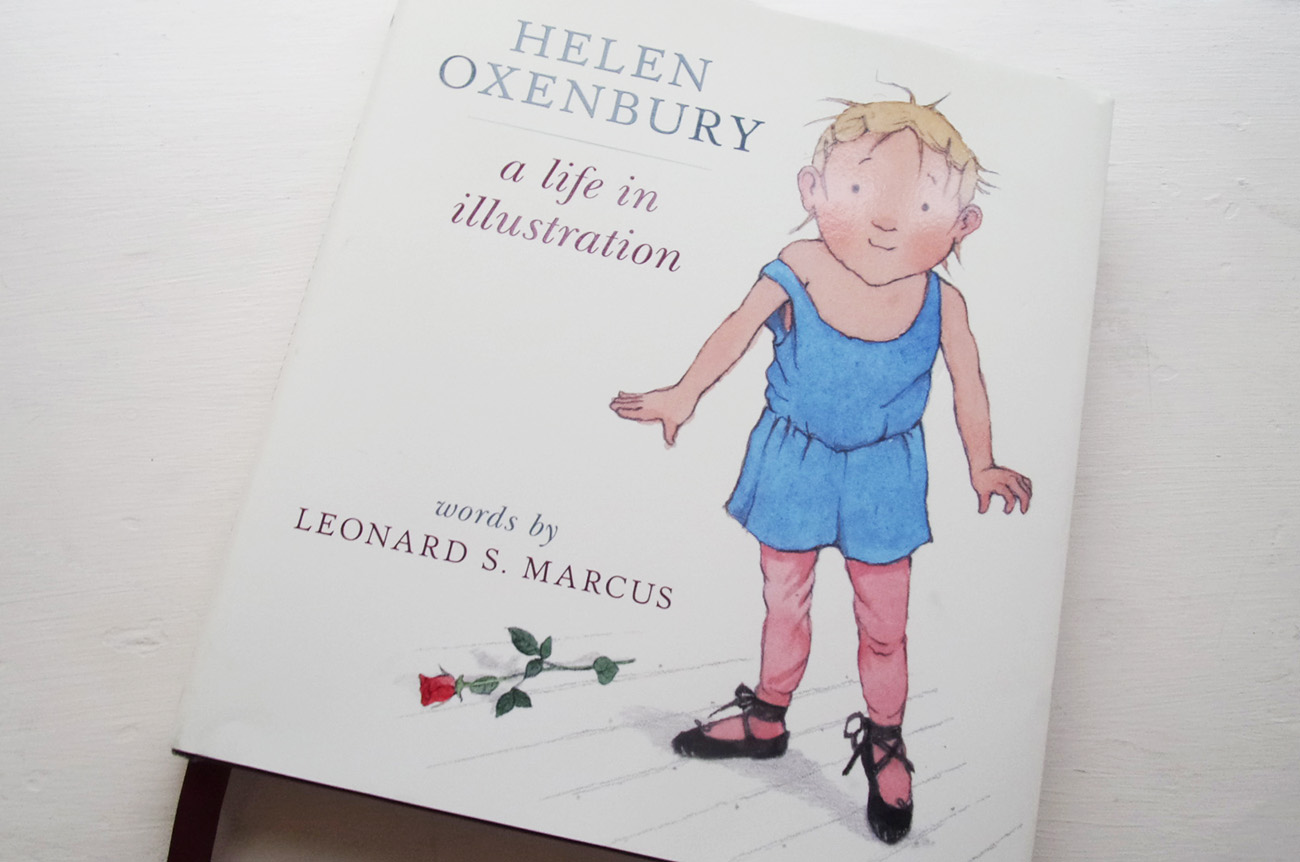 “Here is a lightly held but deeply felt – and considered – view of childhood, parenting and family relations” Author, Leonard Marcus

Capturing the expressions and movement of characters in books can appear easy when it’s so well done, and Helen Oxenbury’s depictions of babies, children, adults and animals do appear effortless. But this is where a book such as this, covering a life’s work, comes into its own; showing progression and development in a personal visual voice that in Helen’s case builds into one of the UK’s most successful illustrators. 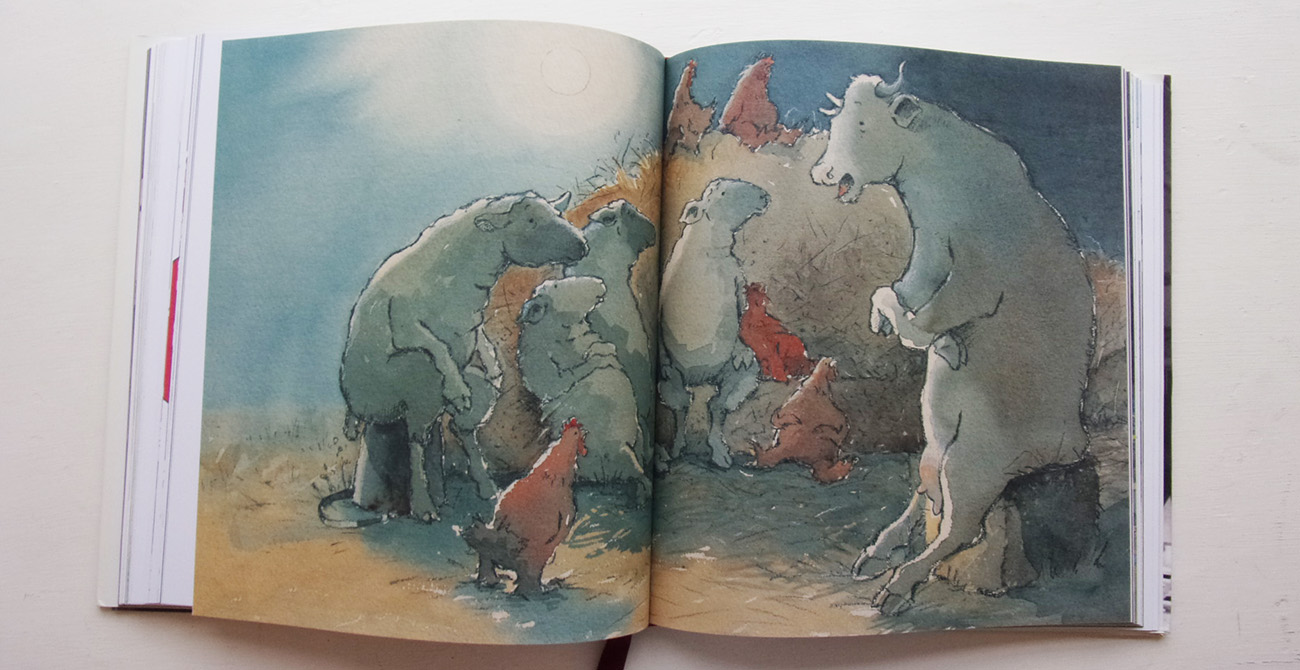 Walker have made the commendable decision to publish this book celebrating Helen’s achievements, with a design sympathetic to the images and the effect they have on the viewer. Sketches as well as final illustrations are given the luxury of double page spreads without the possible distraction of text, affording the images a strong impact.

Describing her life from childhood on, Helen’s vision of moving from Ipswich to study in London is visualised by a snappy element of design with the spread following her decision to go to the capital unfolding to feature one of her illustrations – Alice (in Wonderland) having opened the door to a beautiful garden. Adventure lies ahead! 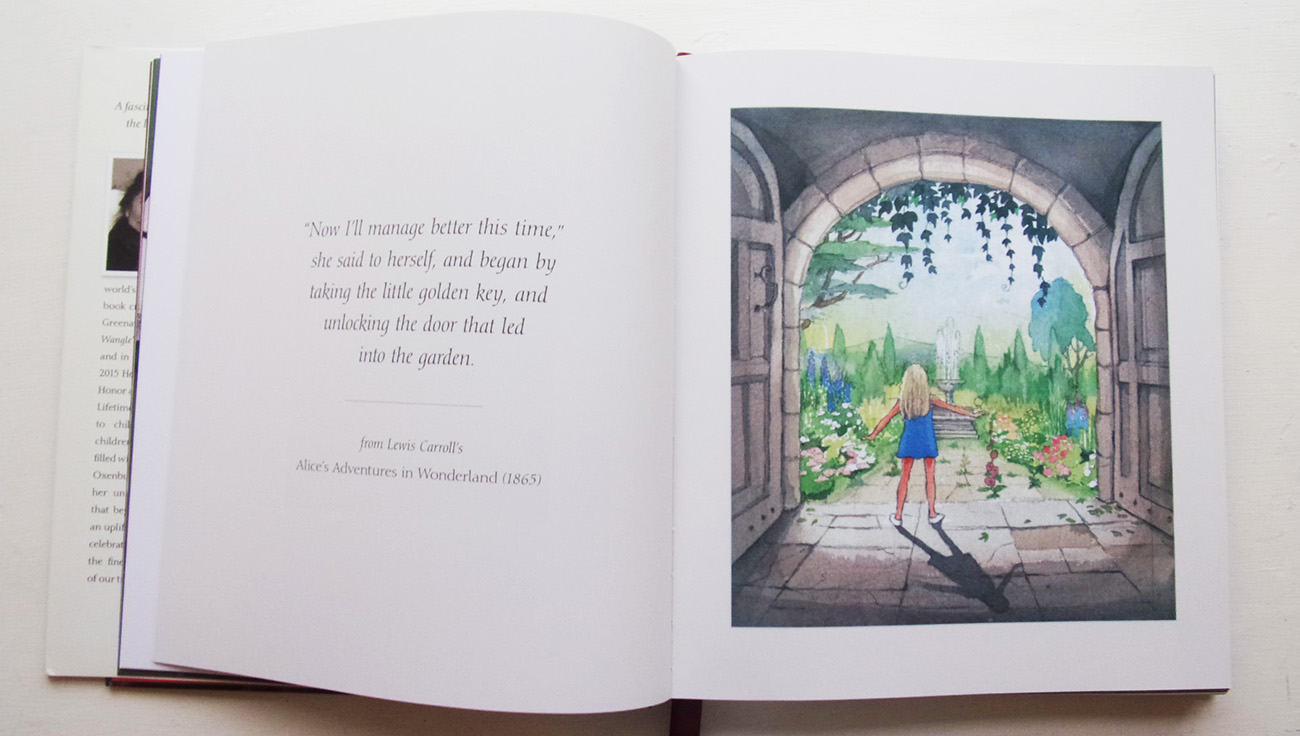 Helen’s first step into having artwork published came through her friend Jan Pienkowski’s Gallery Five card company, and this encouraged her to stretch to a counting picture book, Number of Things, in 1967. The illustrations from this period have a delightful late Sixties look to them (from a 21st Century perspective), as below. 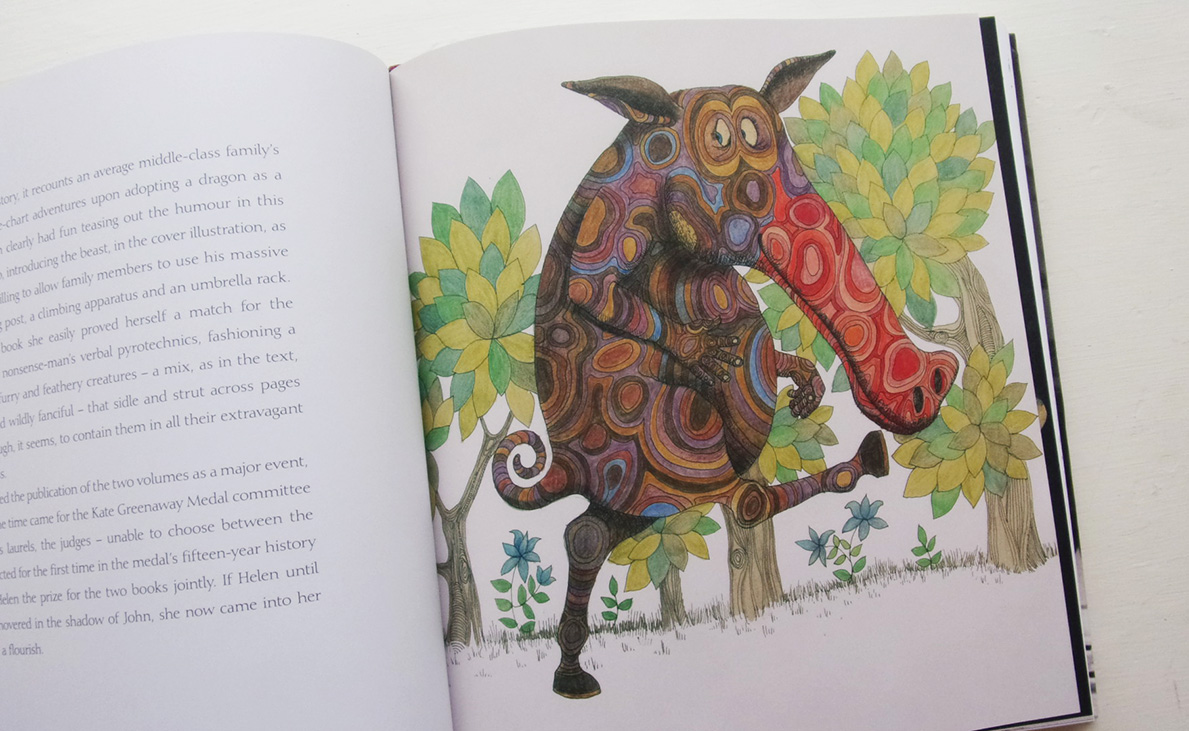 During the Sixties children’s publishers began to expand as post war prosperity grew, and the recently developed business model of ‘co-editions’ increased as publishers from different countries spread the cost of producing a picture book by working together. Helen and husband John Burningham benefited from this easing of costs through cooperation, and winning the Kate Greenaway award in 1969 for two titles contributed to the upward trajectory of Helen’s reputation.

While raising her family Helen adapted her work situation to motherhood, creating images for picture books such as Ivor Cutler’s Meal One in pencil crayon as opposed to her usual watercolour, as pencils were easier to pick up after a meal. Meal One’s mother character lead off Helen’s celebration of the strength of women, given more weight in 2002’s Big Mama Makes the World. 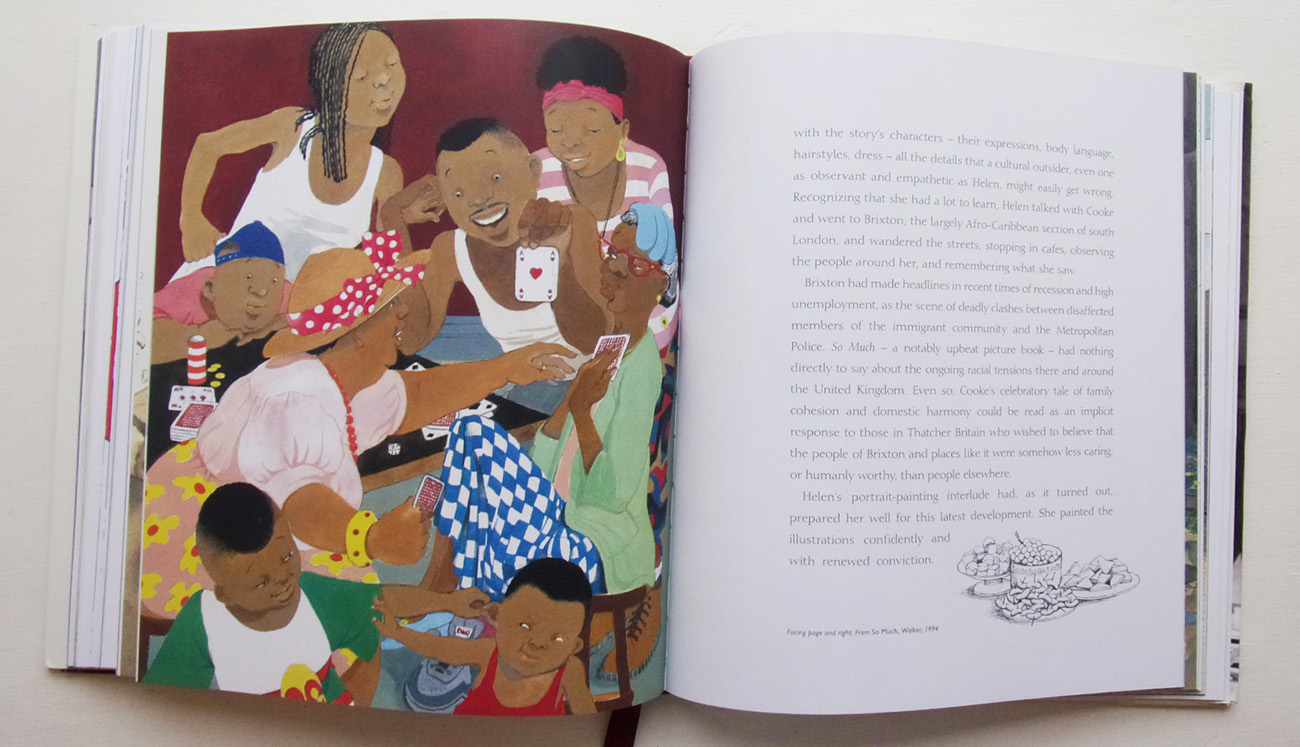 Sebastian Walker of the new Walker publishing house persuaded Helen to work with him in the late Seventies, and by the early Eighties’s her visual voice had developed into the familiar style known to so many today, with the dot eyes (something which Helen is conscious of placing accurately on a face) and convincing child characters, who increasingly included children of colour.

Although presenting a full bibliography at the back, the book focuses on her most famous titles (We’re Going On A Bear Hunt, Farmer Duck, So Much and more), and contributions are also offered from authors of the picture books who describe their feeling about the images Helen created for their words, offering praise, and in Michael Rosen’s case, an initial puzzlement on why everyone else thought the illustrations so special… (he changed his mind later). 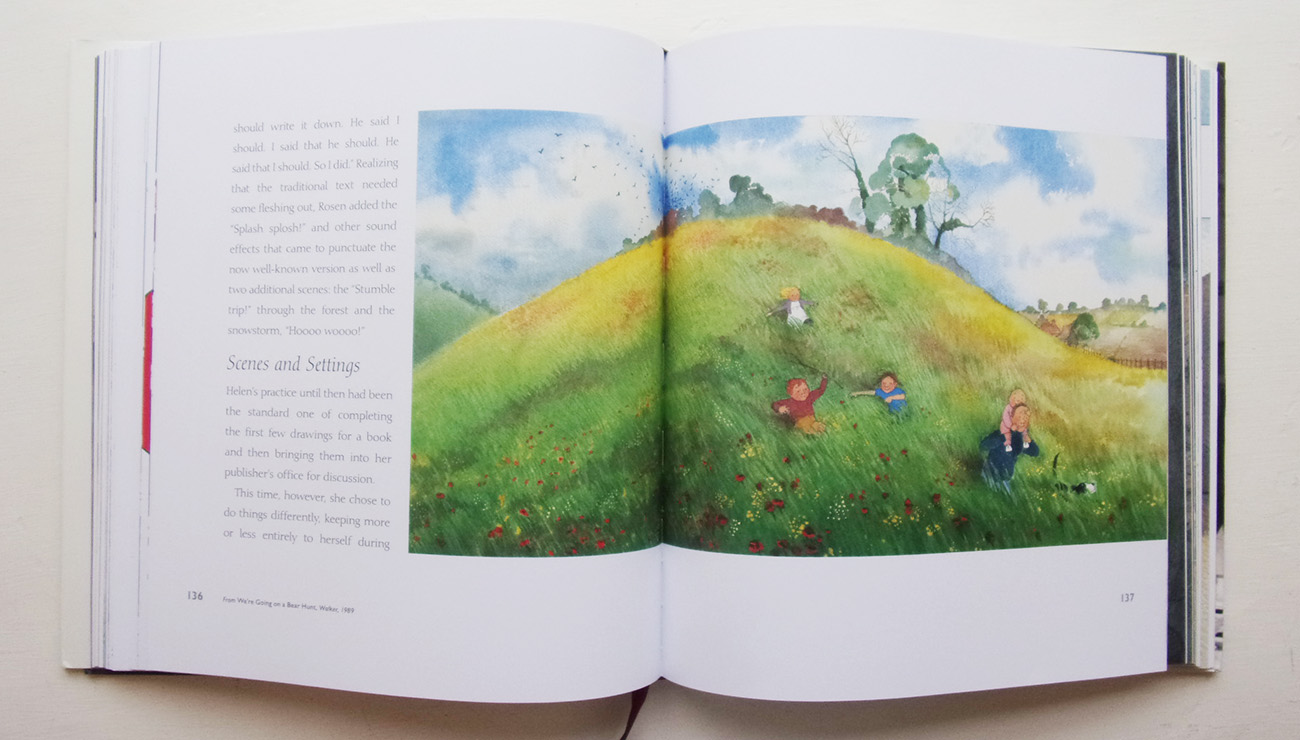 For those who weren’t aware (myself included) Walker Publisher, Deirdre McDermott explains how Helen came to create the Walker ‘Bear’ logo carrying it’s familiar glowing candle, so emphasising how her contribution to children’s books is woven into ‘the fabric and legacy of Walker Books’. 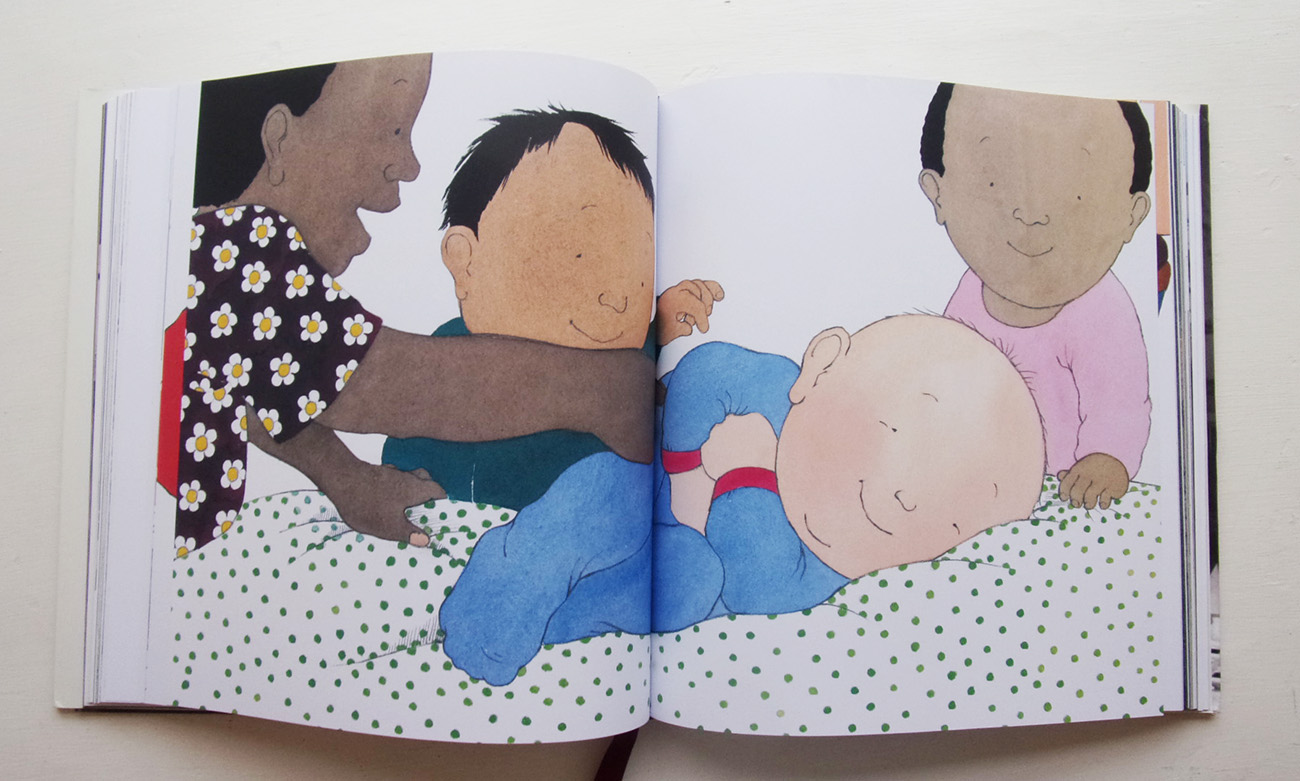 Author, Leonard Marcus describes Helen’s life and career with a light tone, and it’s a delight to be reminded of the work created over such an impressive career. There’ll be a lot of people who will enjoy this book. Let’s face it, who can resist those bouncing babies?