By Jon Link and Mick Bunnage 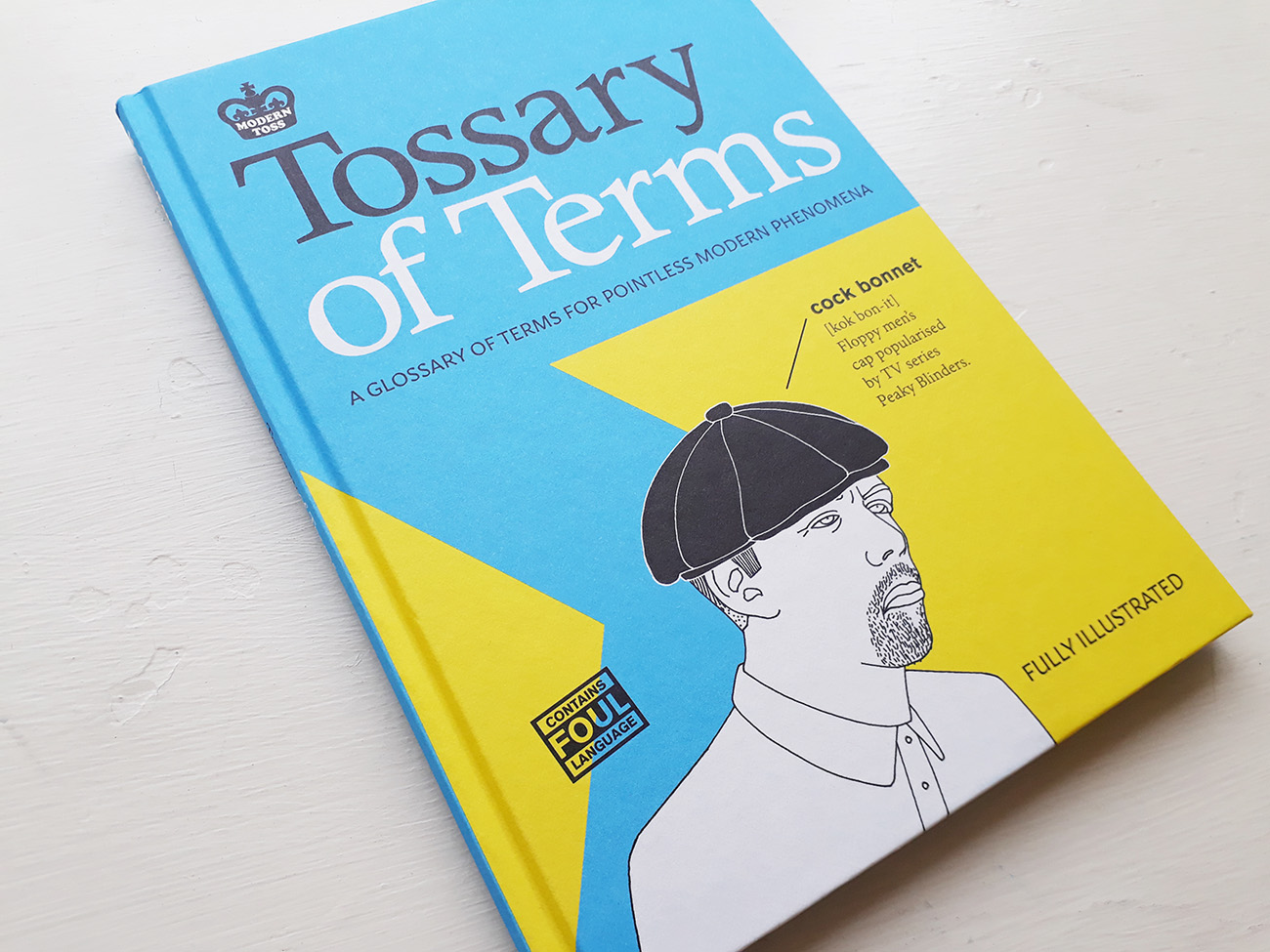 I have to begin this review by confessing that I have never heard of Modern Toss before. Yes, I am a cartoonist, but there are thousands of us, and I don’t read newspapers, Private Eye or New Scientist. Oh, and I have never seen any of their animations or TV appearances either. So I come to their latest project, Tossary of Terms, with absolutely no expectations or baggage. Where have I been for the past fourteen years? In my own little world without the news or reality TV, sort of like the ‘sportsmoat’ on page 37 of this book, but without the sport. 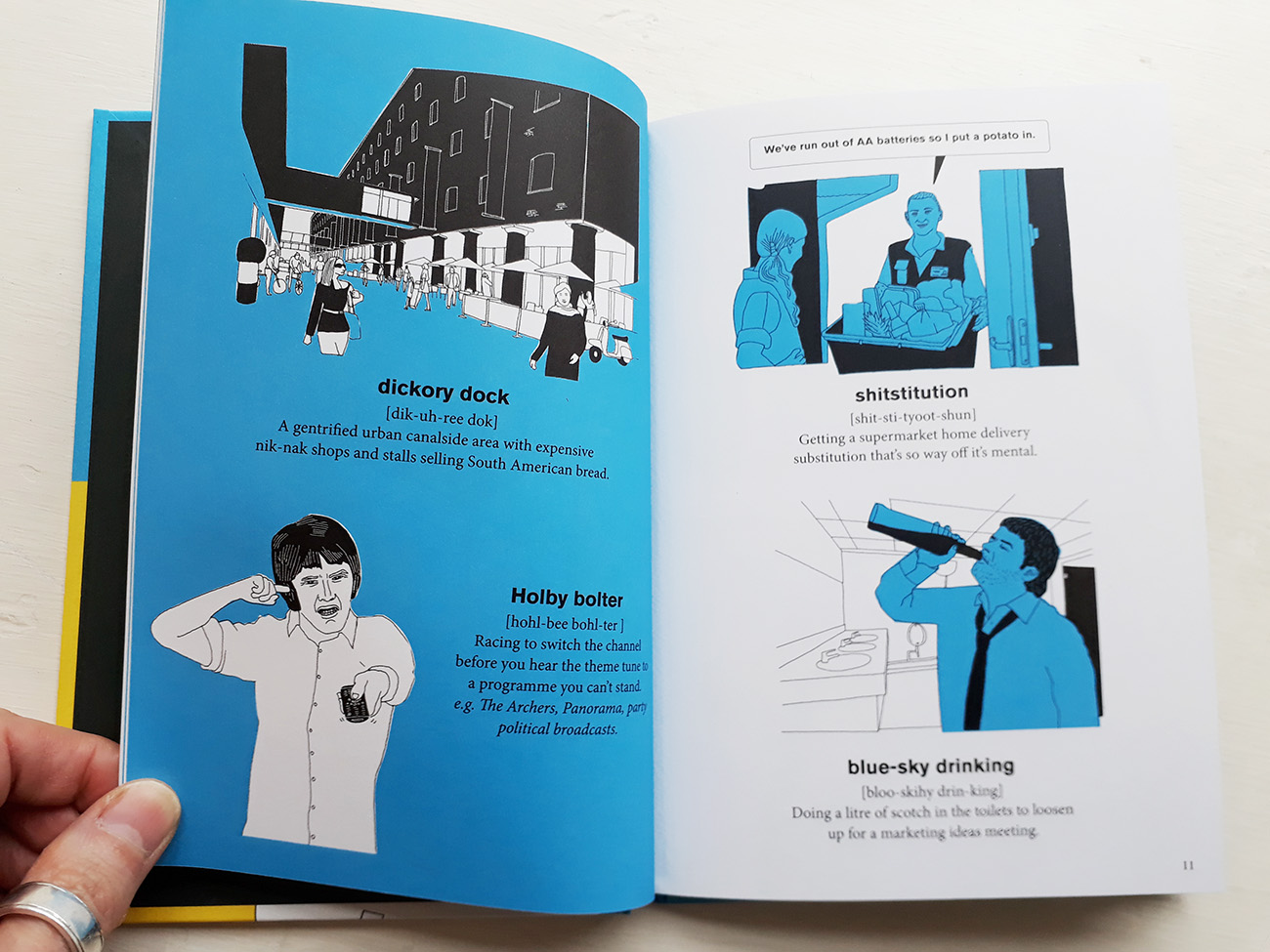 Tossary of Terms is a series of words or terms which describe the modern condition with an accompanying illustration. For example, ‘data barnacle’ is defined as a ‘Café customer who leeches four hours’ worth of free WIFI in exchange for shelling out two quid on a cup of fruit tea’. Yes, I picked a clean one for this review, as many have swearing in them, and there is a ‘Contains Foul Language’ warning on the front of the book.

The drawings which accompany this definition are line drawings in a realistic style, so if you are a fan of Modern Toss they are closer to the colouring books they released in 2016 than the gag cartoons you are familiar with in The Guardian, for example. Colour is often two tone, detail is minimal and most of them have additional speech balloons to add more humour in. There are over 100 in this book, and at the end is a really handy index to save you leafing back and forth for ages trying to find the one you wanted to show to somebody else because you loved it so much. 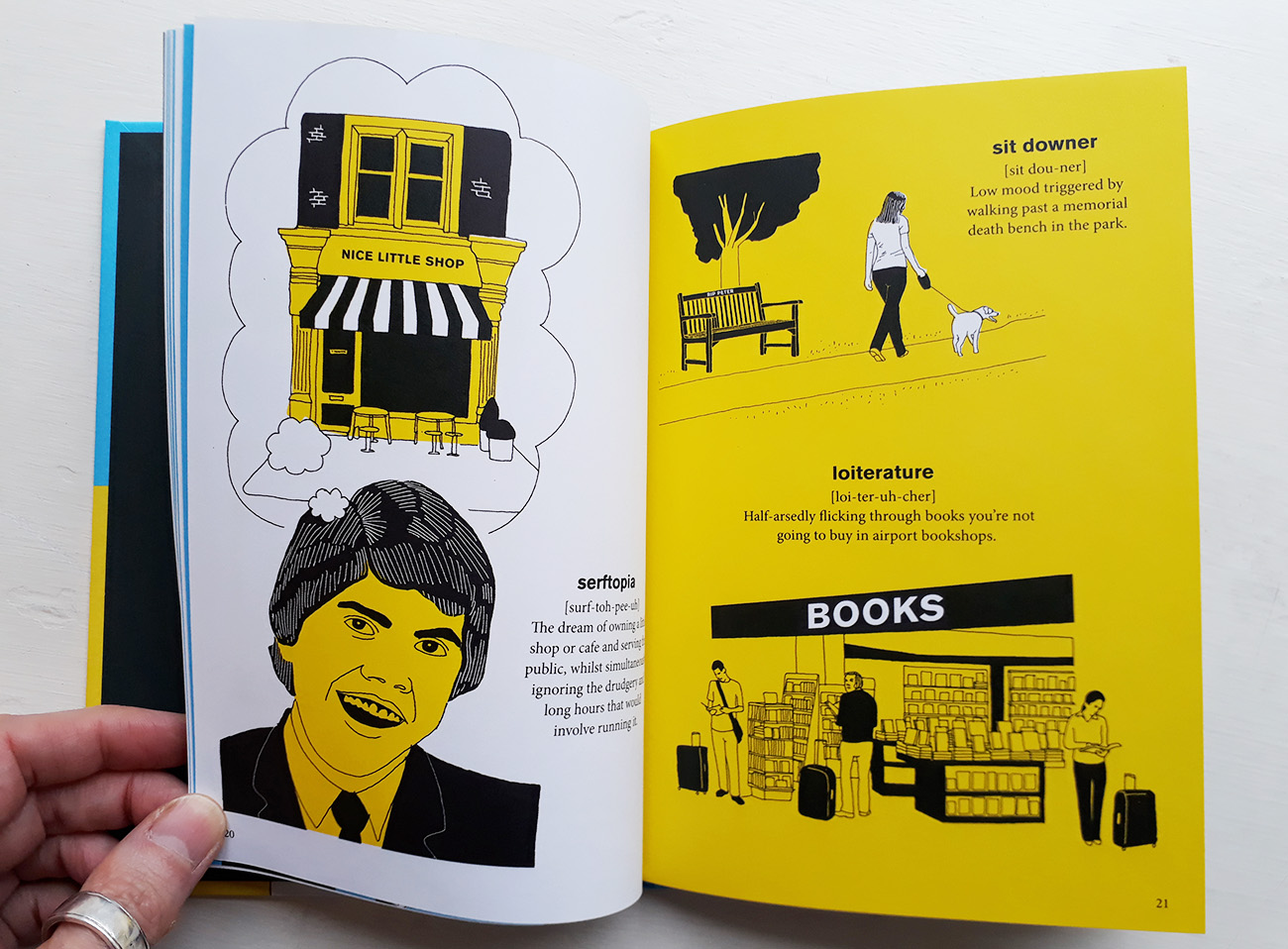 If you are familiar with the impressive portfolio of Jon Link and Mick Bunnage then the humour in here is not going to offend you. They consider themselves to be little more than chroniclers of real world conversations, and that results in lots of swearing and potentially offensive humour. They also have no issues with the suggestion that they can’t draw. In fact, on their website a number of the testimonials from publications who use their work make reference to this, and it becomes part of the humour and the appeal.

These are cartoons which are not intended to be studied for days as part of a Fine Arts degree, but instead are drawn quickly and used to deliver the short conversation (in their gag cartoons) or illustrate the definition as in this book. To that end, I reckon they work really well. As you can see from the examples shown here we are not equating this to the stick man art of Randall Munroe’s xkcd, but neither are we chopping off our drawing hands in despair as we gaze upon the wonder that is Bill Watterson’s Calvin and Hobbes. Saying that, I am going to guess that they spent a lot longer drawing these illustrations (and the ones in those colouring books I mentioned) than they do on the gag cartoons used in The Guardian etc. 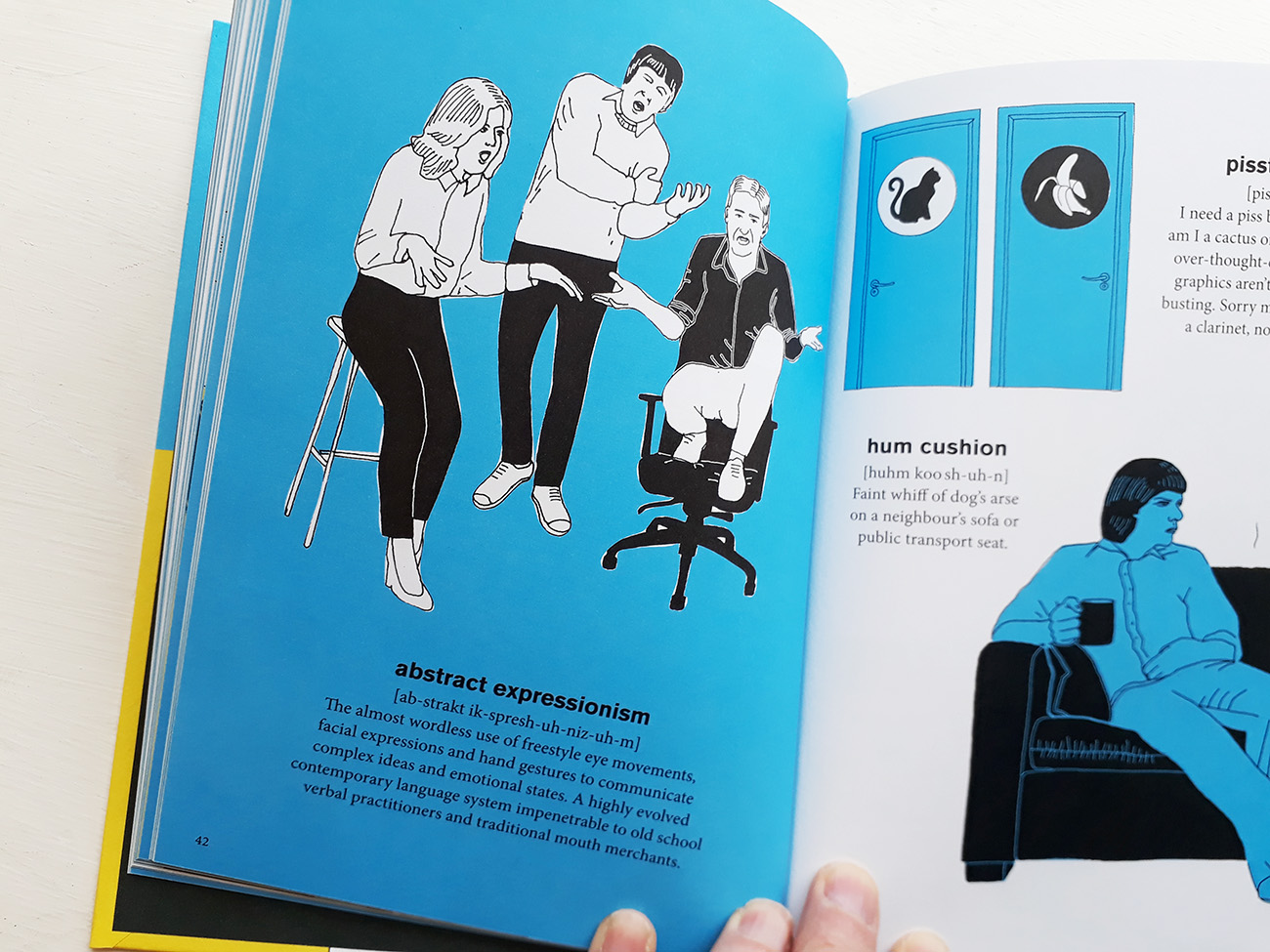 If you know someone who is a fan of Modern Toss then they absolutely need this book in their lives, as the humour is no different to their previous works. I reckon it also has quite wide appeal for people who like their amusement a little edgy and offensive, so it is a perfect release for Christmas, as it is definitely a stocking filler in size (15 x 22 cm) and price. I have to admit that it grew on me quite quickly, and I prefer this to their gag cartoons. Partly this is because their gag cartoons require a connection to the world to understand, and we have already established I live in a bubble. This humour is much more observational in nature and therefore more accessible. There will be at least a quarter of the situations in here everyone will be familiar with. No, I wouldn’t frame anything in here and give it wall space, but it is clever and the illustrations match the content and deliver exactly in the way you expect from this successful partnership. 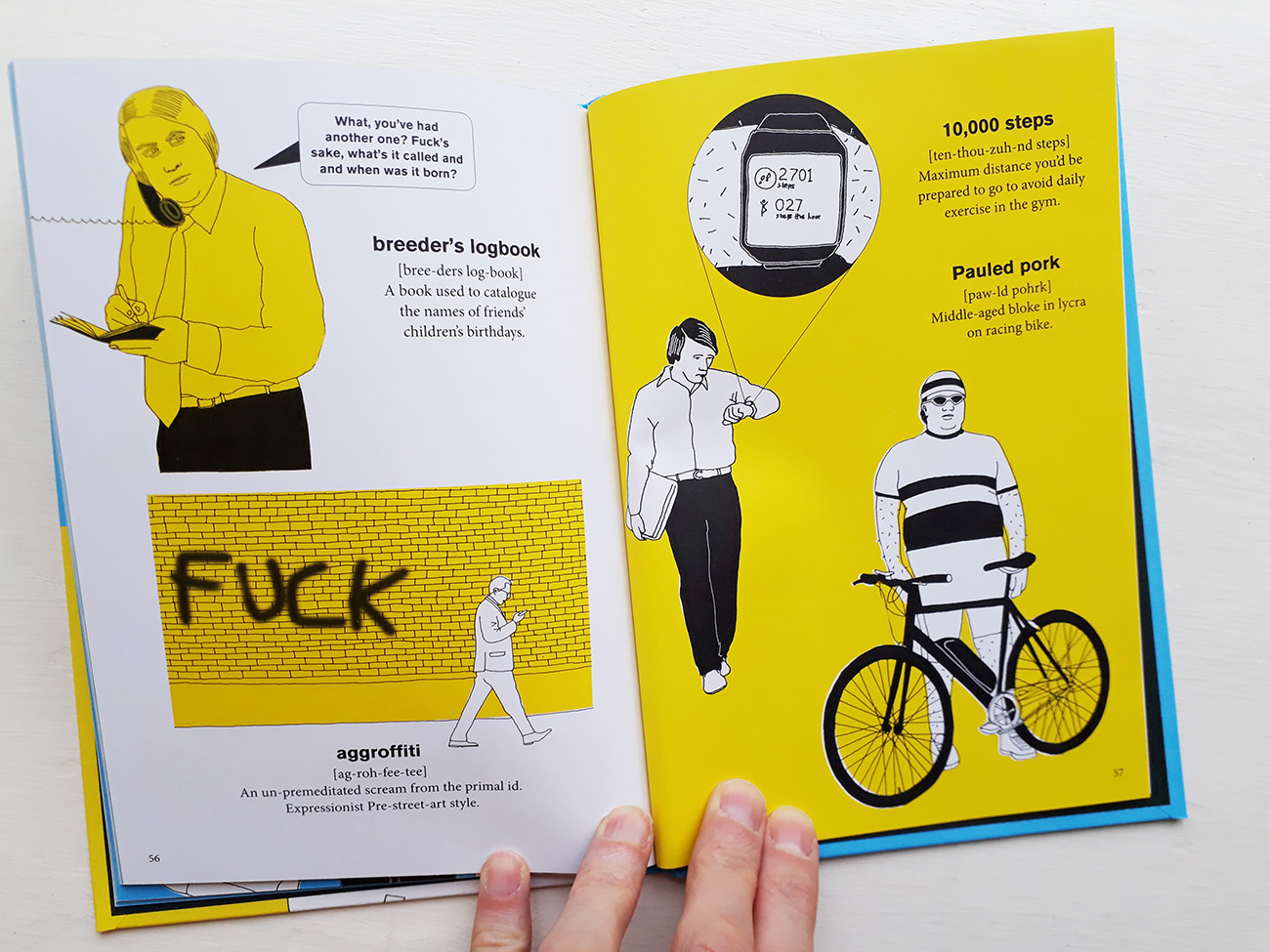