You’re welcomed to the Bologna Children’s Book Fair by a huge digital screen and a large flow of publishers, licensors, writers and illustrators making their way into the  halls of the Fiere (attendees totalled over 27,600 in 2018).

AOI joined the throng this year to meet illustrators and the EIF, deliver talks, launch the Price It Right campaign and meet up with art directors who had been seeing AOI members’ portfolios. We talked to several AOI members who attended for their impressions of the Fair and how they felt it had benefited them. 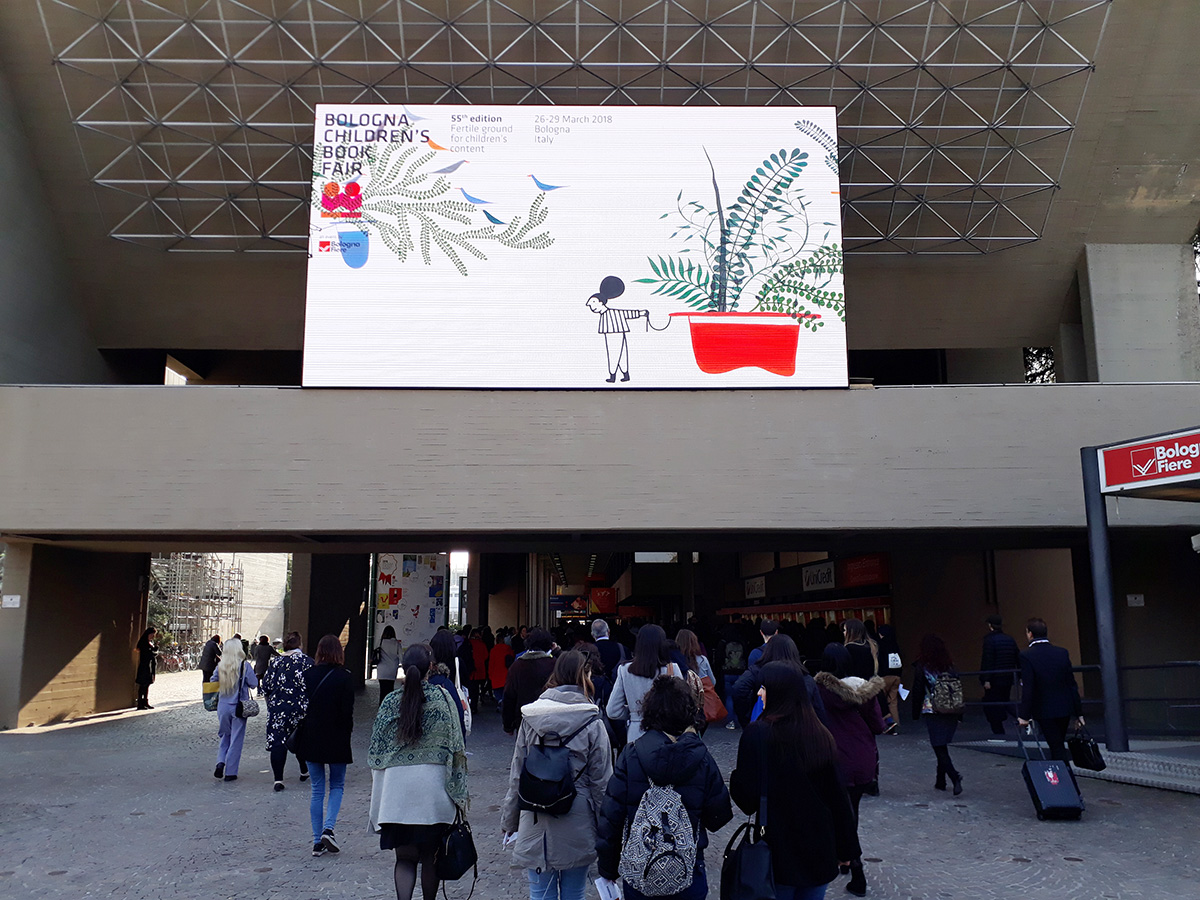 Almost as soon as you get in the Illustrators’ wall appears. This is the famous self-promotion space where illustrators stick up their cards and posters (it’s a free-for-all after the first day). 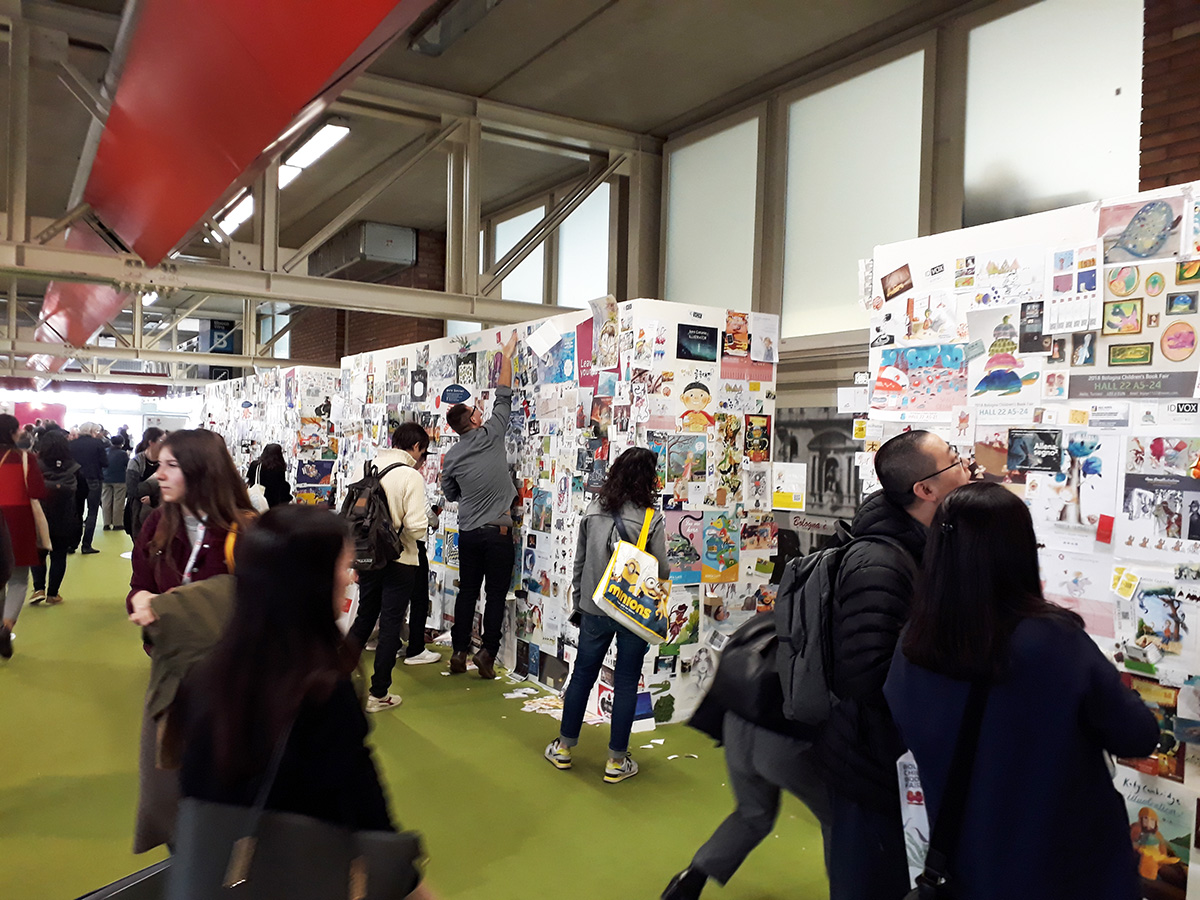 Illustrator and educator, Andy Robert Davies believes it is worth being wary of The Illustrators’ Wall “Firstly, I should explain that ‘the’ wall is actually several walls around the main hall. I observed that it was mostly illustrators who congregated around these areas, picking up a collection of business cards as mementoes and inspiration. I asked an Art Director his opinion of the walls and he confirmed that it was useful for finding new talent, but he took photos rather than picking up scores of cards. The conclusion I came to was that it is essential to have something on the walls, something that catches the eye and shows off your website details, but don’t assume that every card that is taken will find its way onto an art director’s desk. Also, not all illustrators play fair, I had work covered up by that of others, and even images which were practically glued to the wall were removed (I’m hoping it was a very keen art director). It is a hustle and being prepared for this is essential.”

AOI met with the European Illustrators Forum (EIF) to discuss issues around illustration in Europe and the Price It Right campaign. EIF shared a stand with the Italian organisation Autori di Immagini (AI), who were close to the Illustrators Survival Corner where many of the illustration related talks and panel events took place (6,000 people visited this area over the Fair). AOI’s Derek Brazell led a well attended panel on Agents with Davide Bonazzi and Ivan Canu, and launched the EIF Price It Right campaign alongside AI’s Paolo Rui on the first day. 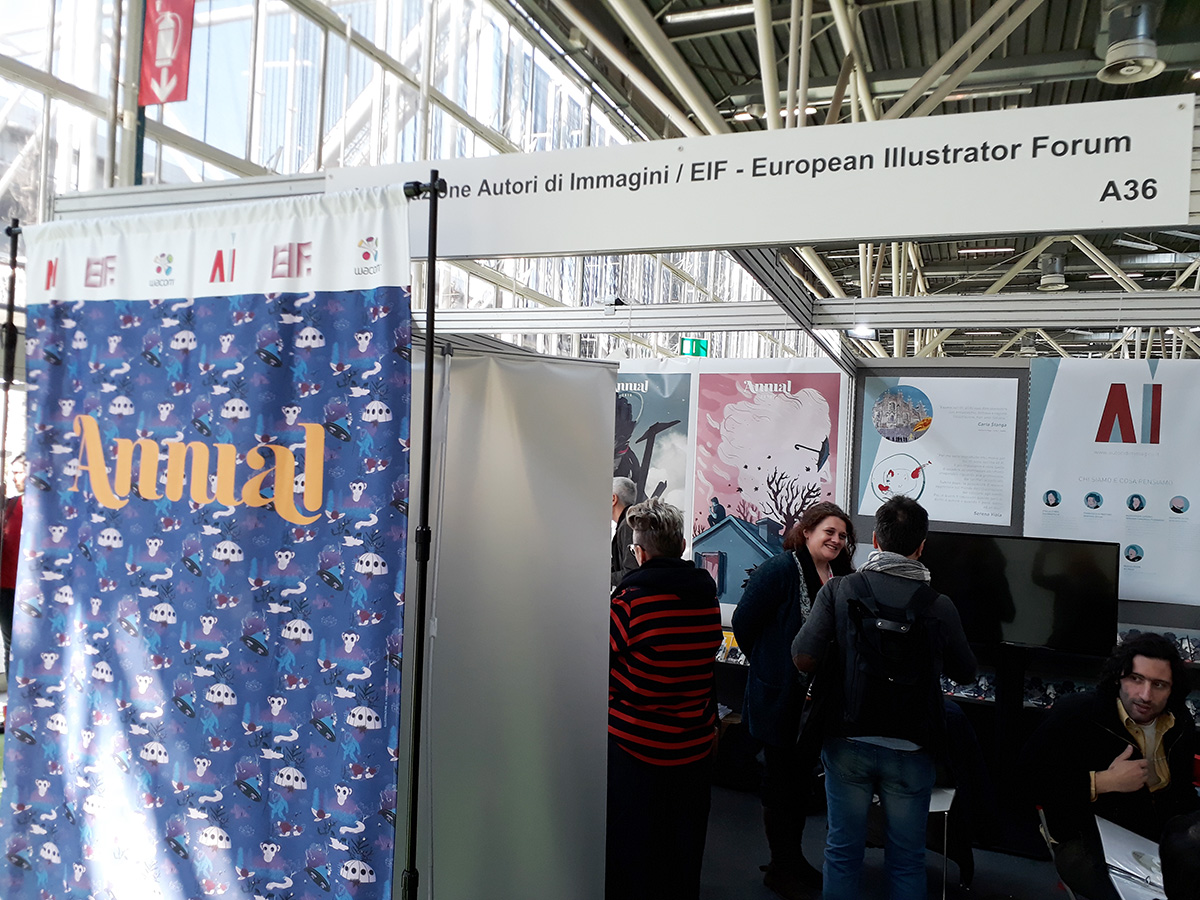 Although many illustrators book a slot with publishers for porfolio reviews before the Fair opens (they get very busy), it is possible to get a review on the day, and publishers will advertise (as below) if they are putting time aside for reviews.

Laurie Stansfield visited for the first time in 2018 and says she will definitely be coming back. “Attending the fair was incredibly useful for moving my career forward within publishing. I think the biggest boost was simply having so much fun. I made new contacts, gained a new perspective of the publishing industry, had insight into illustration trends which you can’t see so clearly with the vastness of the internet, the list of learning goes on.” 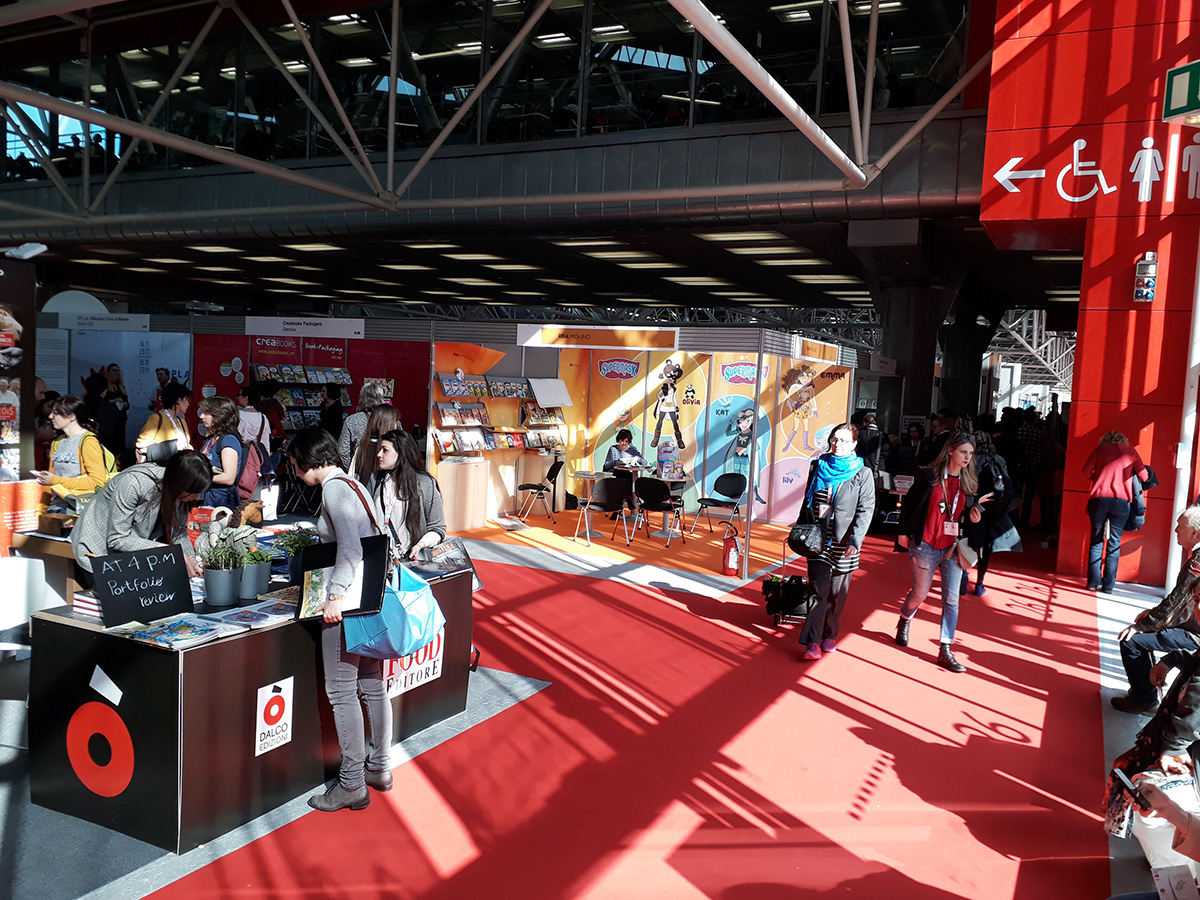 Laurie arranged portfolio reviews and benefitted from the feedback. “Hearing honest thoughts from numerous art directors helped me see my work afresh and gave me confidence with how to progress. I am overwhelmed with the reception and encouragement I received.”

Her illustrations were featured in The Bookseller’s daily magazine Showcase, and with the work she had stuck on the illustrator’s wall, she made new contacts “and my Instagram account shot up. My networking hat worked a treat (this is an illustrated boat which is made out of paper and sits on my head. And it has my business cards pegged onto ‘fishing lines’ for people to take) for making people laugh and connecting.’ 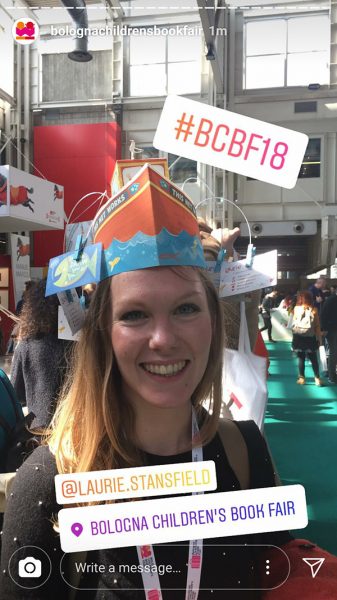 Laurie Stansfield in her hat (Instastory)

‘BCBF also gave me the chance to hang out with like minded people, I think there’s something special about finding your ’tribe’, whatever the industry. In my view, illustrators are people who value creativity and they have often made huge sacrifices in order to follow a career path based on their skills and strengths. They’re a brilliant bunch to hang out with.”

Giulia Sagramola, who has attended for 10 years, had felt publishers had been appearing less interested in getting appointments during the Fair. However, this year the few appointments she got seemed more fruitfull. “When I show my work, I normally have a portfolio booklet, some books I already published and a mock-up of a book project I’m working on right now. I know I have different directions in my work and I was very happy to see the editor of a big publishing house being happily impressed when she saw the variety of my work. I’m often worried that my work might be too various to catch the attention of the client’s eye, so that was a good feeling and a way to remind myself to believe more in my choices.”

On the second evening of the Fair AI had organised an Illustrators Selfie Me dinner where illustrators took over a whole restaurant in the centre of Bologna for a set menu, and then had great fun drawing self portraits which were stuck up on the wall. You can see some of the fantatic results on Facebook. 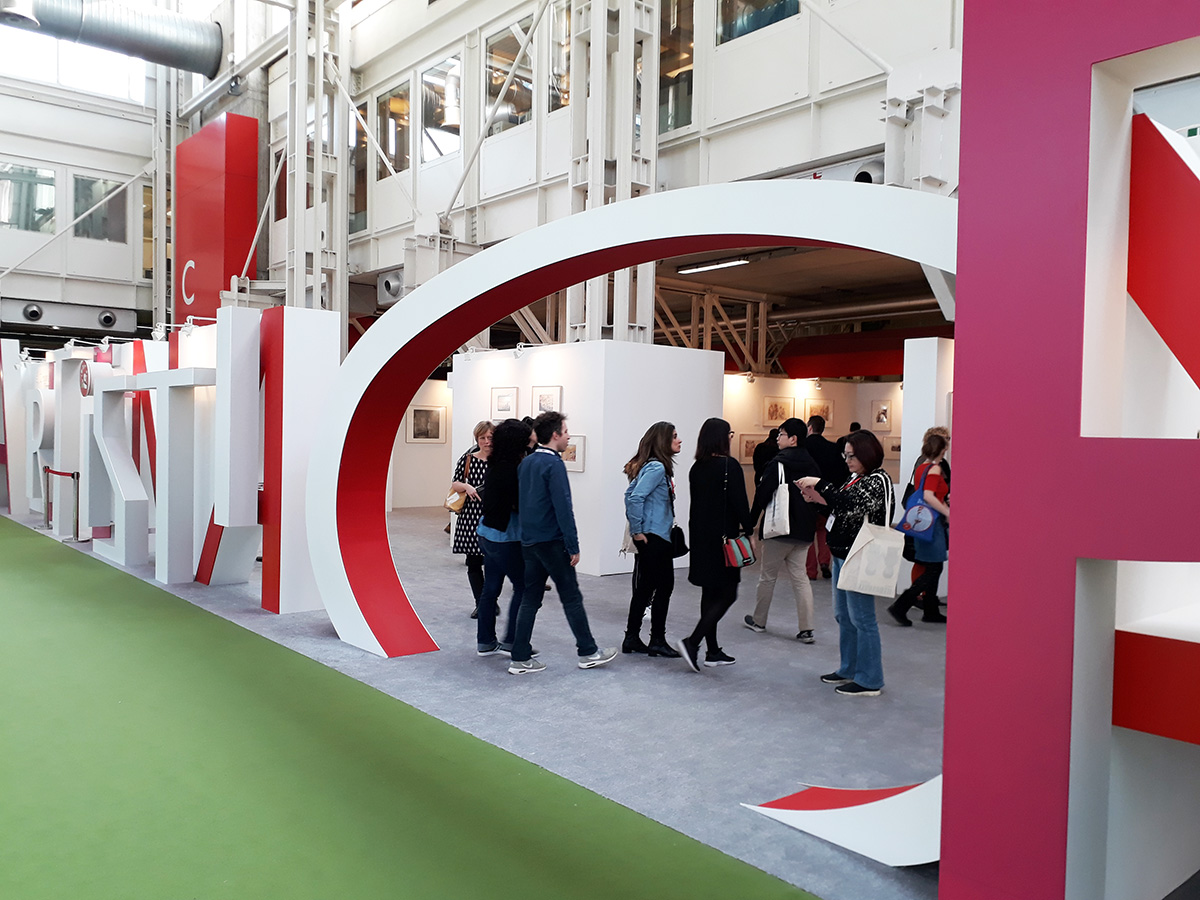 China was the guest country for the Fair, and held an exhibition of work in the main hall

Making the best of all opportunities is important, and Andy Davies recommends that you “Always, ALWAYS, have a business card to hand. I walked miles up and down the exhibition halls, handing out cards to the various publishers at their stands, but I handed out a large number during informal chats and chance meetings, meals and even on the plane back to Heathrow! Pretty much everybody is there for the same reason, to meet people, to make deals and to initiate projects relating to books and illustration, so each conversation is an opportunity.” 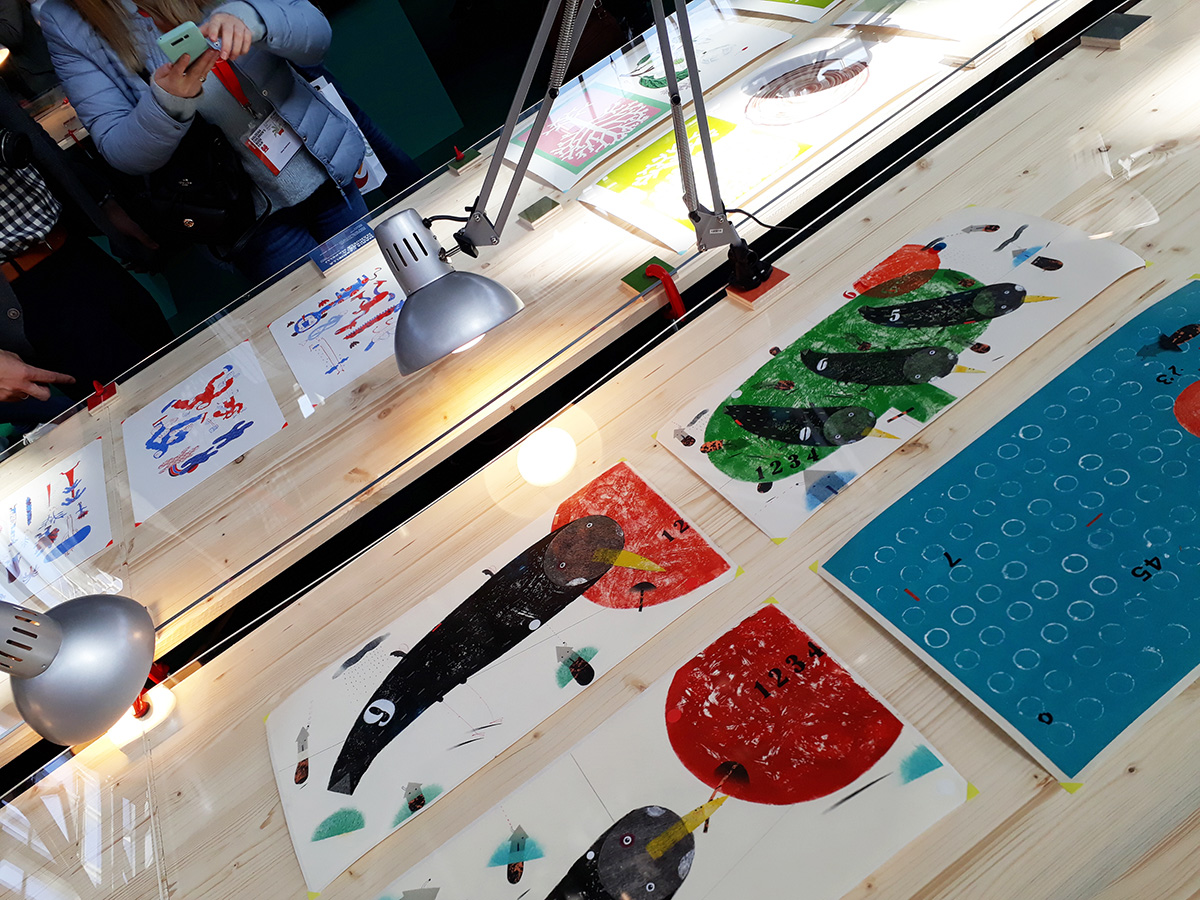 He also observes that you can easily spend all of your time at the fair, “But I made the decision to take some timeout to explore the city of Bologna, to draw and to sample the excellent food on offer. Having a bit of time to recover and process everything, was useful and I felt I had two very productive days meeting publishers, art directors and numerous illustrators. I will probably take the same approach the next time I go to Bologna…as well as doing some sprint training beforehand!”

Taking time to explore the show can give new insights into the publishing world. “Looking at the exhibition of this year,” says Giulia, “I also had the confirmation that some trends are now in some ways “official” in the field, and it feels rare to find something that is more unique, after many years knowing the field.”

Everyone that we spoke to felt that the Bologna Fair experience was well worth making the effort for – meeting new potential clients, making friends and broadening their industry experience. For more insider information on making the most of the Fair, see Jean Mackey Lebleu’s guide. 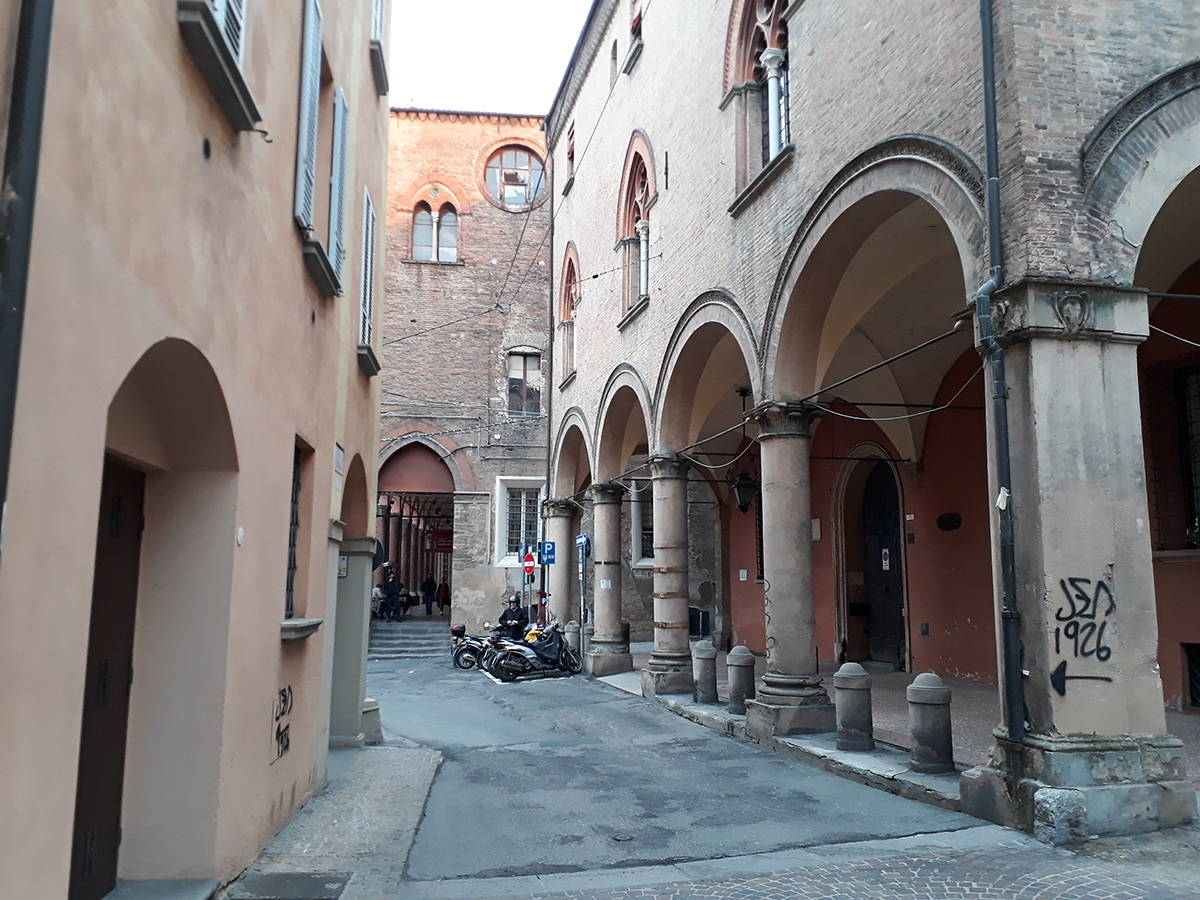 One of the city centre streets in Bologna