Why did you make this work:
An informative illustration piece showcasing the life and career of dancer and choreographer, Isadora Duncan. Duncan is seen as a pioneer of modern dance, and an icon of influential female artists of the early Twentieth Century. As someone who is interested in dance history, I used creating this piece as an opportunity to learn about her life and art, and to in turn share her story with others.

How was the illustration used:
Printed to appear in an exhibition.

How did you make this work:
Isadora Duncan was tragically killed when the scarf she wore became caught in the mechanisms of her car, which strangled her. This was a dramatic end to a dramatic life and career. I decided to tell her story on this flowing material as she set out on that fateful journey. The colours and textures were created with oil pastel sgraffito and added digitally to line drawings. Dimensions 40cm x 50cm.


Biography:
Kathryn is an international award winning illustrator, writer and university lecturer based in London. She is a keen researcher into theatre and performance history, with a passion for ballet of the early Twentieth Century.Kathryn studied BA(Hons) Illustration at the University of Worcester and MA Visual Communication at the Royal College of Art. Since graduating in 2015, her work has been shortlisted for and won several national and international illustration prizes, and has been exhibited internationally in Europe and Asia. 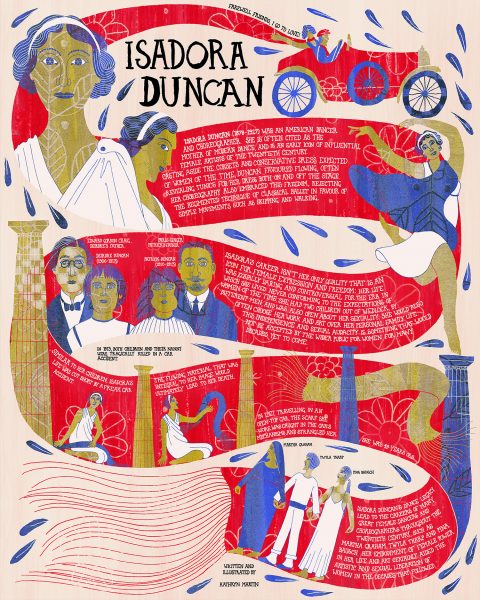