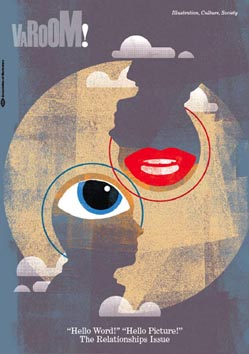 THE AESTHETICS OF A RELATIONSHIP

Great illustration comes out of the relationship between art director and illustrator, but what are the pitfalls and what makes it work? Adrian Shaugnessy investigates.

WORDS AS IMAGE AND OBJECT

Sam Winston uses words and data as materials for his work. Esther Dudley reflects on a recent lecture by Winston.

Five illustrators respond to the idea of the Significant Other, visualising a piece of work that has knowingly of unknowingly shaped their illustration. David Foldvari, Anna Higgie, Mick Wiggins, Edwina White and Daniel Pudles take part.

In a genre not known for subtlety, Romance fiction has inspired extraordinary illustration. Barbara Cartland’s not-so-hidden-love was the work of great fashion illustrator Francis Marshall. Hannah Rollings, whose work plays with the codes of Romance, also contributes.

Audrey Niffenegger is not only the best-selling author of a novel turned major Hollywood film, The Time Travelers Wife. Derek Brazell interviews the illustrator and maker of artist’s books with roots in Chicago’s rich heritage of artist bookmakers.

THE SCRIBBLER, THE PHOTOGRAPHER & THE CELTIC PUNK

Illustrator W. John Hewitt reflects on his time on the road with photographer Steve Pyke, documenting legendary folk-punk group The Pogues. How did it go?

MASH Is the cover for Mark Ronson’s new album a Camel or a Robert Altman movie?

ILLUMINATIONS Allen Ginsburg’s definitive 1950s beat poem Howl has been adapted for the cinema, with illustrator Eric Drooker creating the animations. He talks about Ginsburg, the metropolis, and the challenge of visualising a ‘stream of consciousness’

THINKING WITH PICTURES Lectures, presentations, briefings have all fallen under the curse of Powerpoint and bullet-point thinking. Chris Hatherill looks at two institutions using illustration to connect ideas in very different ways.

UNCHARTED OCEANS OF THE FUTURE Scientists use illustrators to provide images, graphs and data visualisations of research conclusions. But, argues Tom Barwick, what if Scientists and Illustrators collaborated earlier in the research process?

LIKENESS In the age of camera phones, social networking and image sharing sites, our visual landscape is flush with images, likenesses of ourselves and others. John O’Reilly explores the art of likeness with Lola Dupre and John-Paul Thurlow.

MOTHERHOOD Becoming a mother creates a new relationship, not only with a child, but with a woman’s old sense of self. Victoria Squire’s work explores this journey of the self

Varoom 14 is available from the AOI Shop