By Robin Jacobs and Sophie Williams 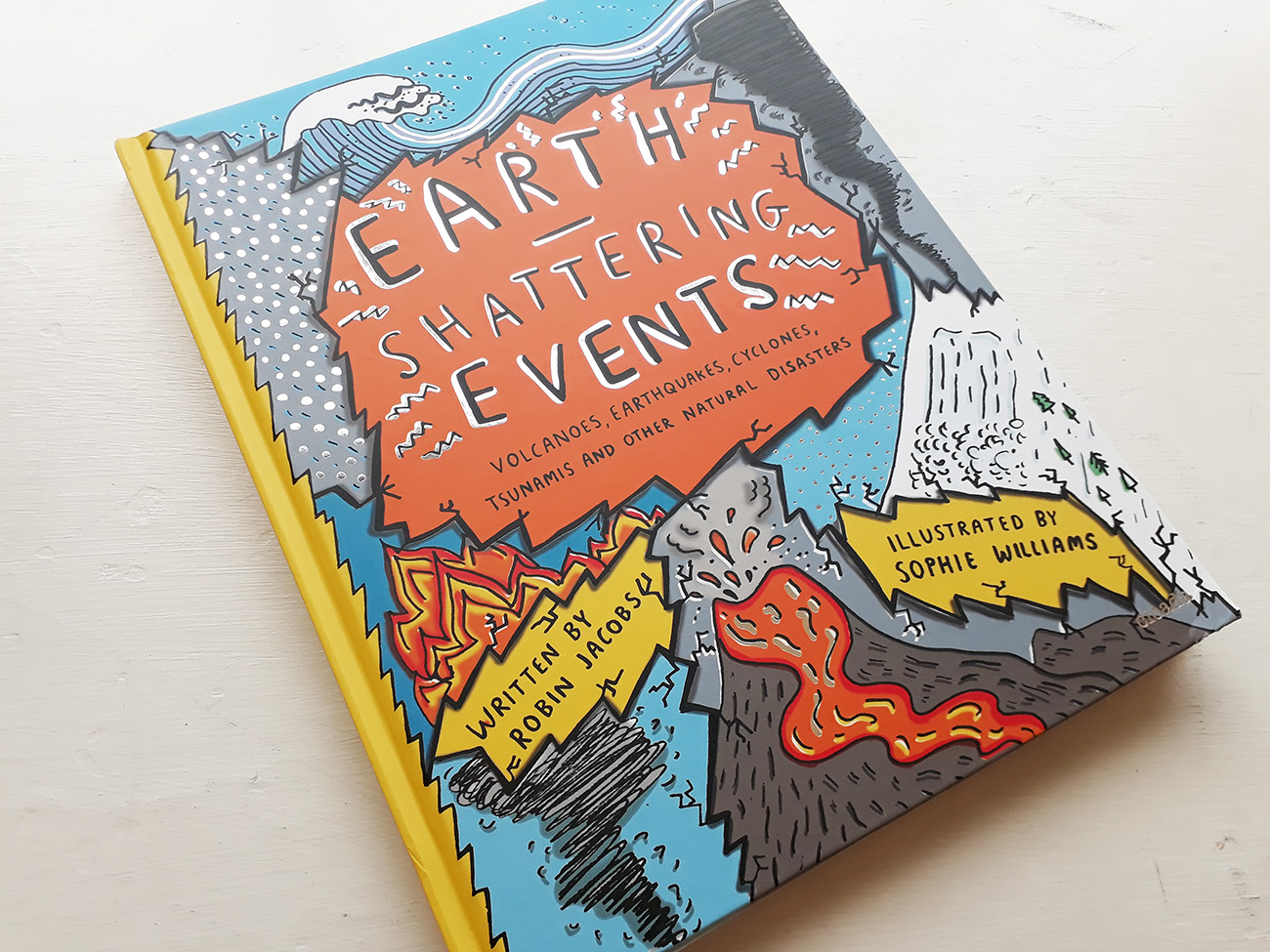 Physics and geography are often over-looked subjects amongst the general public – and especially amongst those young enough to be taking lessons in them. In the words of Terry Pratchett;

‘People look down on stuff like geography and meteorology, and not only because they’re standing on one and getting soaked by the other. They don’t look like real science. But geography is only physics slowed down and with a few trees stuck on it, and meteorology is full of excitingly fashionable chaos and complexity’

Earth Shattering Events! seeks to take some of the more dramatic convergences between physics and geography and make them more entertaining for youngsters and adults alike. Robin Jacobs and Sophie Williams have taken naturally occurring disasters from around the world and broken them down to the how, where and why, making them understandable and engaging even for those initially left lukewarm by the topic. 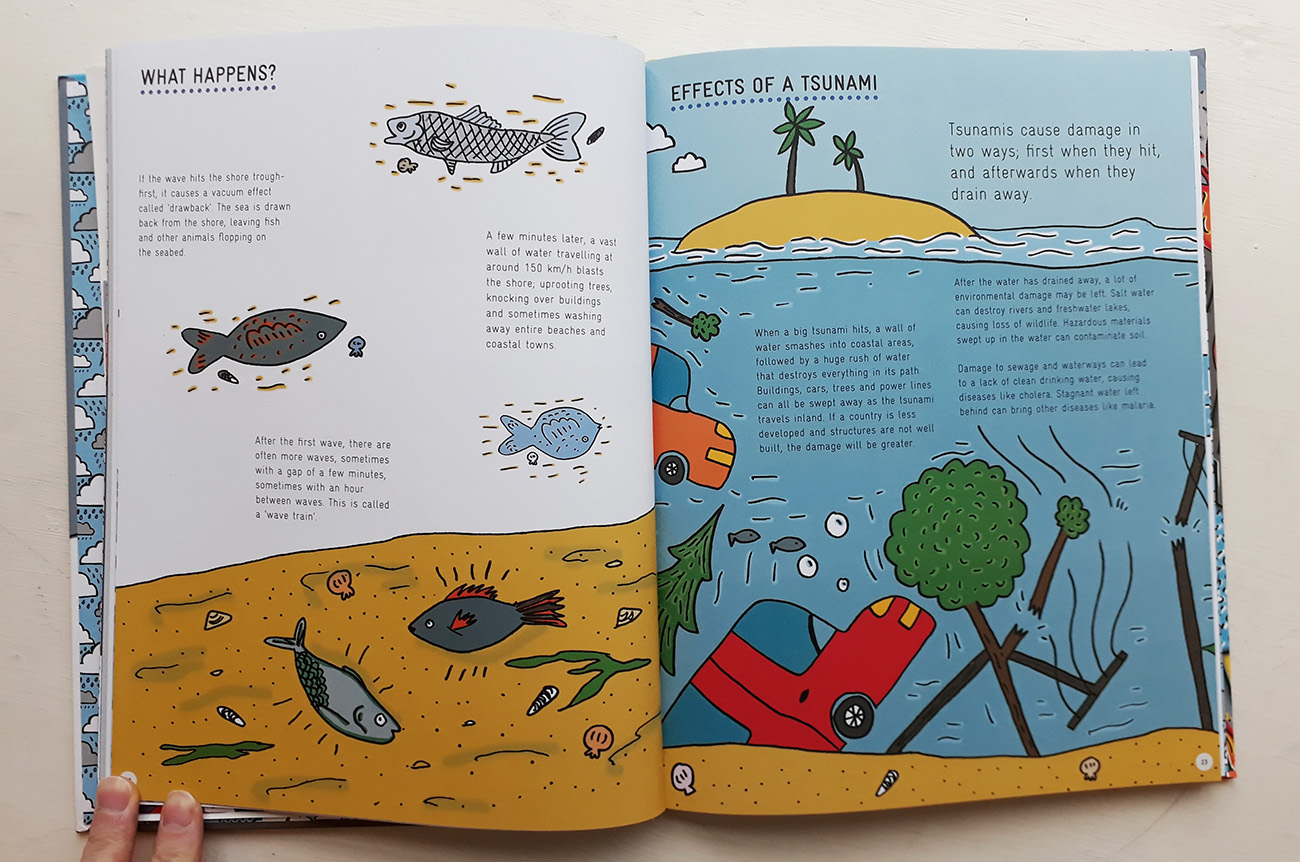 Each section tackles a different type of event, and mixes the science behind the event with pages devoted to maps and diagrams, as well as insets that cover related factoids. Those children who start reading are going to find themselves engrossed in the fault-patterns in tectonic plates, all laid out by Williams’ deliberately naïve and colourful illustrations that make each and every page larger-than-life. Drawn in a style designed to be understandable to children and adults alike, the diagrams and cartoons are clear and accessible, illustrating everything from Caribbean gods to the formation of supercell storms. Most importantly of all Williams’ use of fun as a tool for learning makes this a valuable way of teaching by stealth. 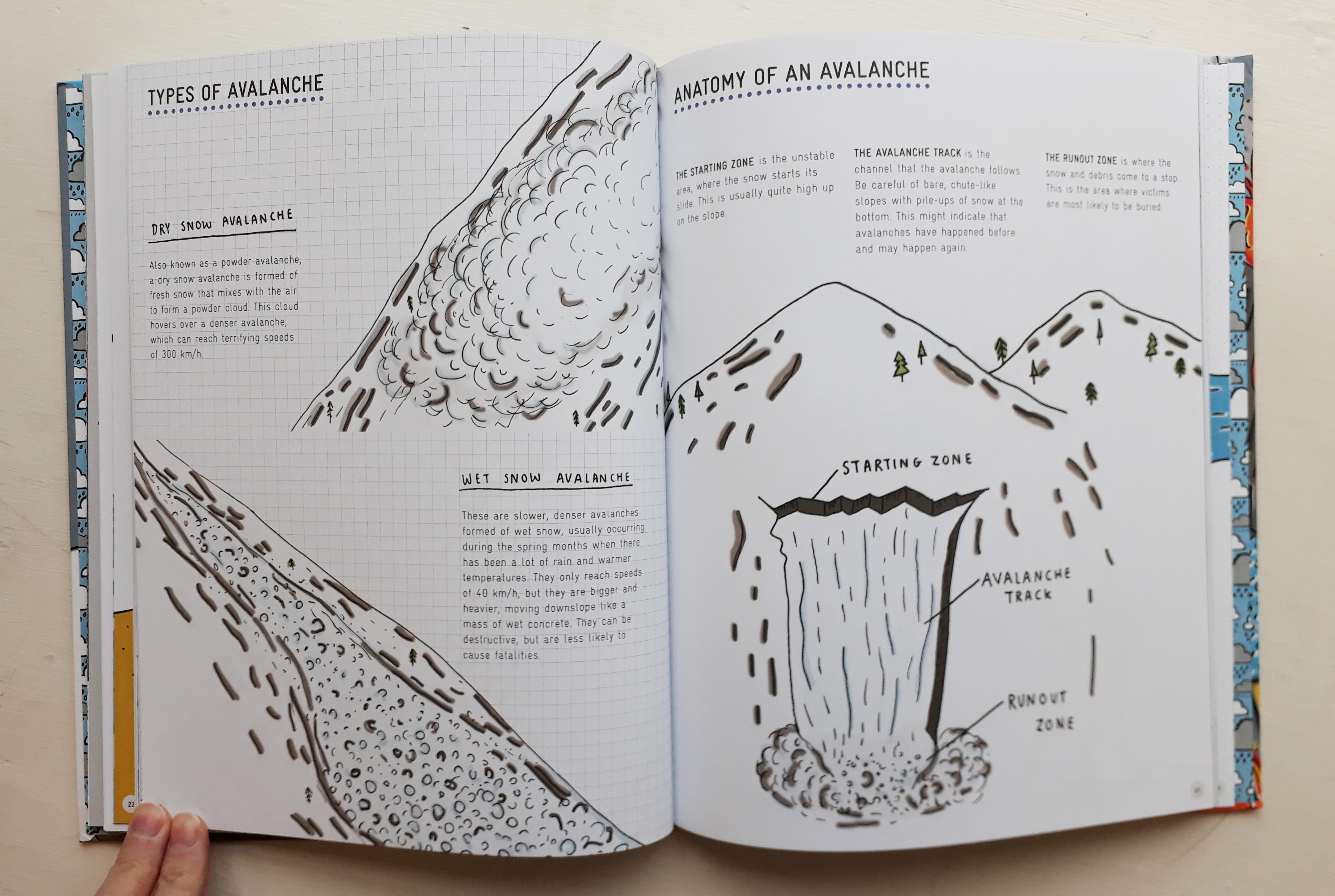 Some images fill double page spreads and are shown as maps covering tectonic plates or tornadoes and will satisfy those who love an infographic, whilst Williams’ diagrams make scientific cross-sections much more comprehensible for young geographers. 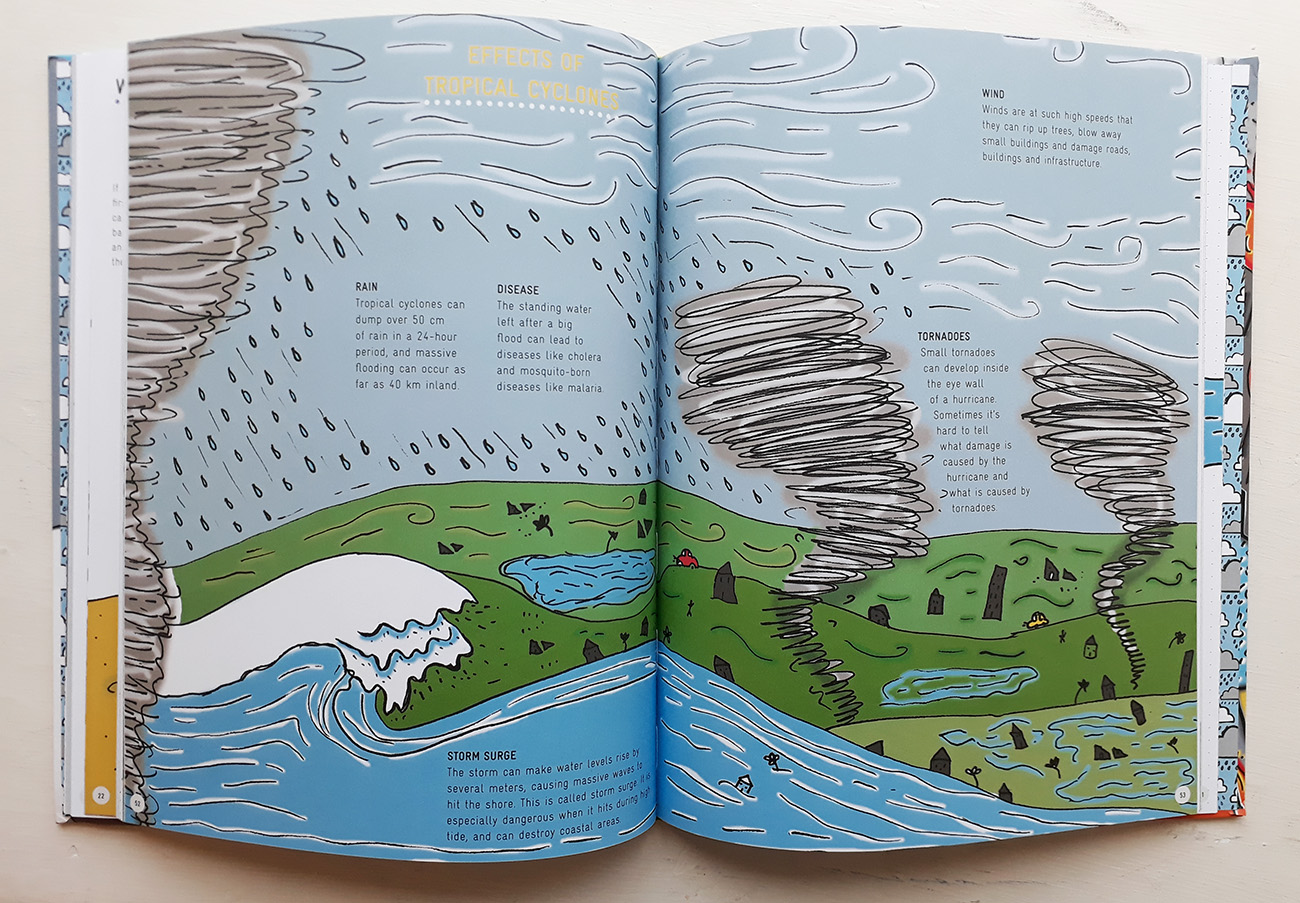 If the idea of giving a child a book on disasters feels in some way wrong, it’s also filled with some very useful information, written with humour by Jacobs. Reinforcing information early and often is an excellent way of ensuring people know what to do in an emergency, and Earth Shattering Events! has examples of what to do in each section. Cartoons of how to respond to blizzards or wildfires may be increasingly helpful with our increasingly volatile climate, and having it presented in a friendly way helps to tackle the subject without alarming. 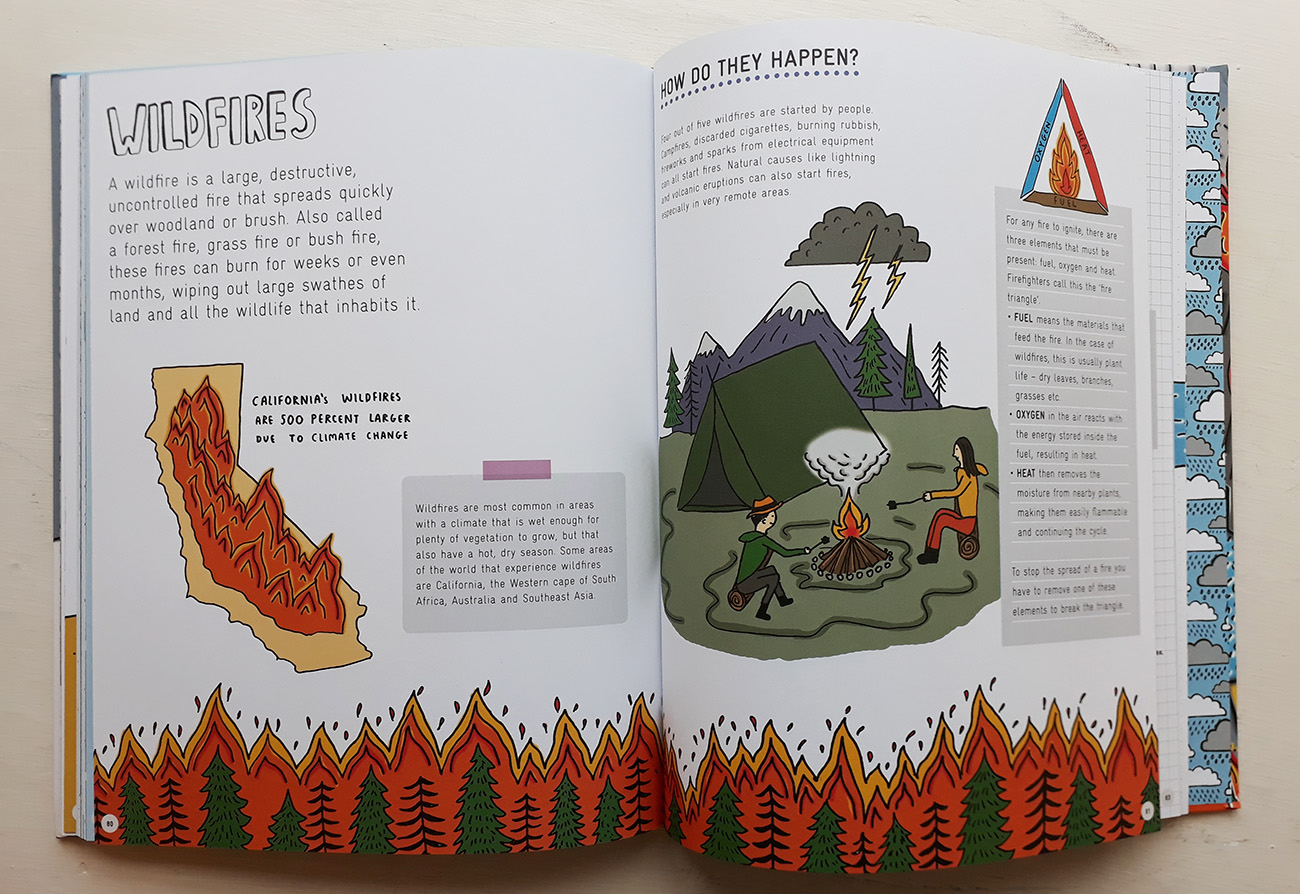 Earth Shattering Events! is one of those books that perfectly balances both the needs of the child, and the wants of the adult; it’s fun, educational and equally entertaining to people big and small. As our world changes around us, understanding the events out of our control happening around us is increasingly important, and yet still overlooked. 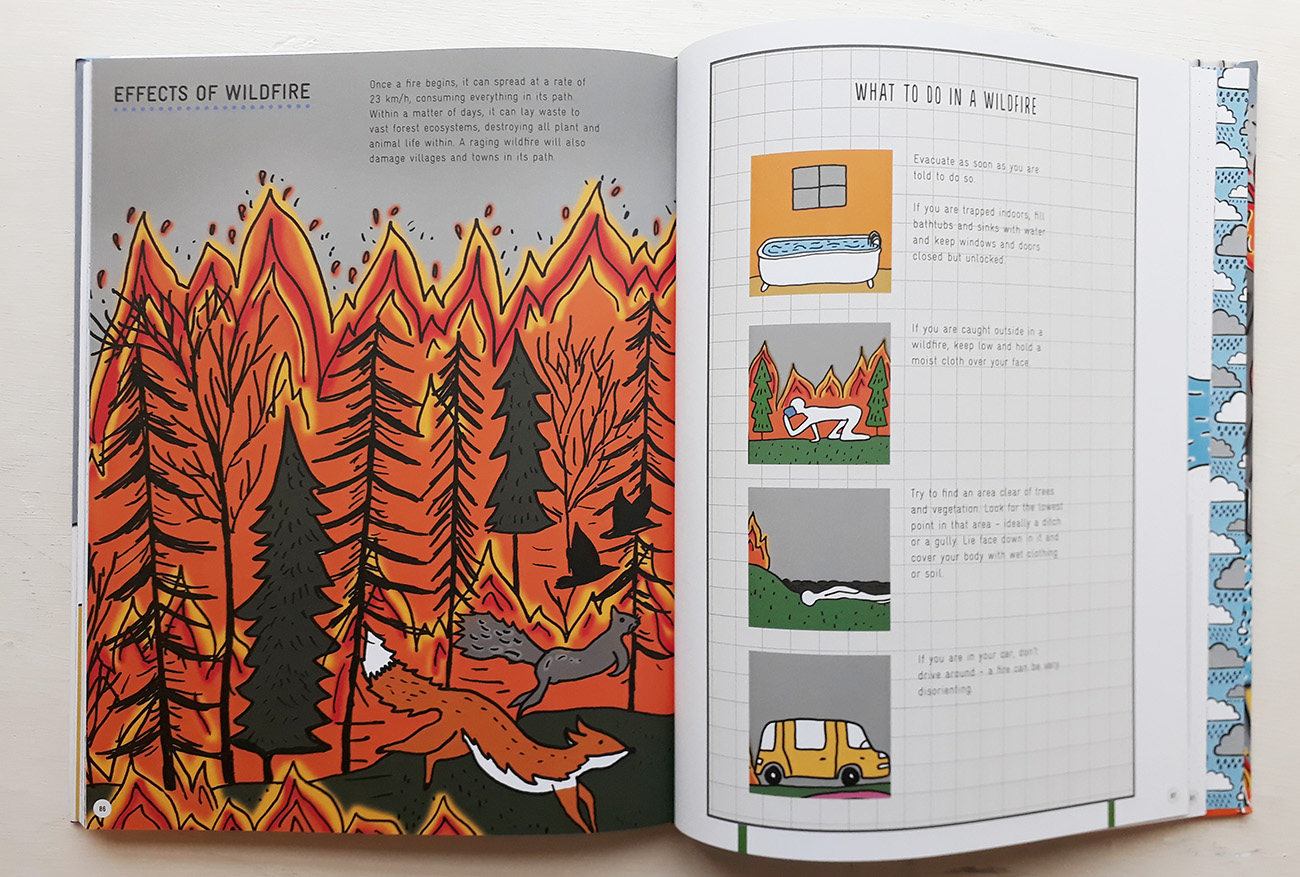