Master of chill, Illustrator and Animator Joe Prytherch (aka Mason London) has built an impressive portfolio of seamless animated loops complimenting your favourite chill out tracks. Creating loops that work alongside contemporary jazz, and arcade game music. Joe has collected an impressive client list of names such as Majestic, FIFA and Redbull Music that will have you up all night wanting to see what’s coming up next

Previously having worked for Boiler Room, Joe now works freelance in a scenic town in Sweden. Continue reading to find the answers to questions we were driven to ask about his career. From a walkthrough of his process, to why detail and pop/culture references are key, and how creating personal work brought in his dream music commissions – you’ll also see clips of his work and even spot a ‘tag’ or two!

You’ve been involved with some exciting companies pre-turning freelance. What lessons did you take away from your role as an AD at Boiler Room – and bring forward into your freelance practice?

Working as an art director in Boiler Room really taught me the same lessons that working as an AD in any company does – primarily time management skills and how to handle and prioritise between working on multiple projects at once. When I began my career in design as a junior – not at Boiler Room but a large advertising agency – any time management decisions were taken by someone above me, I was just given a design task and told when it needed to be finished by. As I progressed upwards through the company structure more of my time was given over to management tasks, first of all just managing my own time on particular projects. When I became art director at Boiler Room I was managing not just my own time but also prioritising between different projects and deciding who would work on what within the design team.

The work was varied. In a week we could be working on promo material for between 2 to 5 live shows, art direction for a partnership with a brand, merchandise designs and more mundane things like sending business cards to print for a new starter. Everyone thought that their job was the most important so I had to decide where each project should go on the big conveyer belt of work and who should do it.

Going freelance has seen me need to add client services and accounts work to my daily schedule too. I think my experience as an AD really helped me understand how to effectively prioritise and time manage which becomes even more important with the extra administrative jobs that being freelance brings.

Can you tell us about a recent project you’re really happy with – and how it came into fruition?

One of my favourite projects from last year were the two EP covers and a series of animations I did for Kiefer, a producer and pianist from LA. Kiefer saw my work on Instagram, @masonlondon, and put me in touch with his record label Stones Throw. 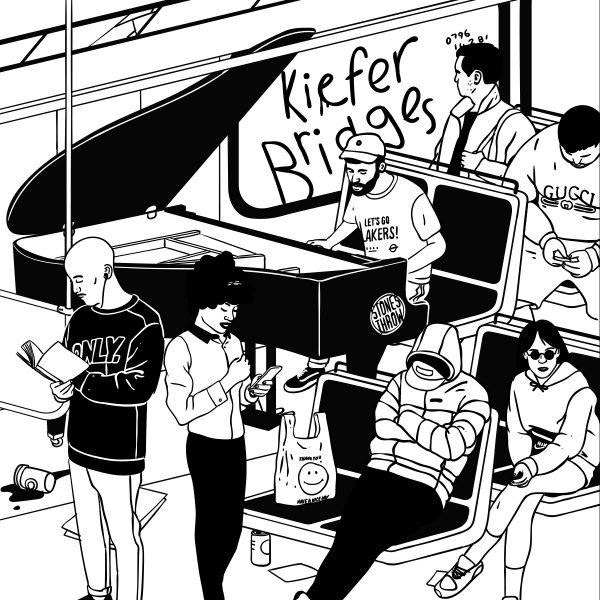 The brief for the animations was very open, Kiefer just said that he’d like clips of him playing the piano in different scenes. I thought it would be cool to have him playing in places where you wouldn’t be able to fit a piano – a subway, a bodega, a camper van. In the scenes no one is paying attention to Kiefer being there and instead he is just soundtracking different snapshots from modern life that hopefully people can relate to. 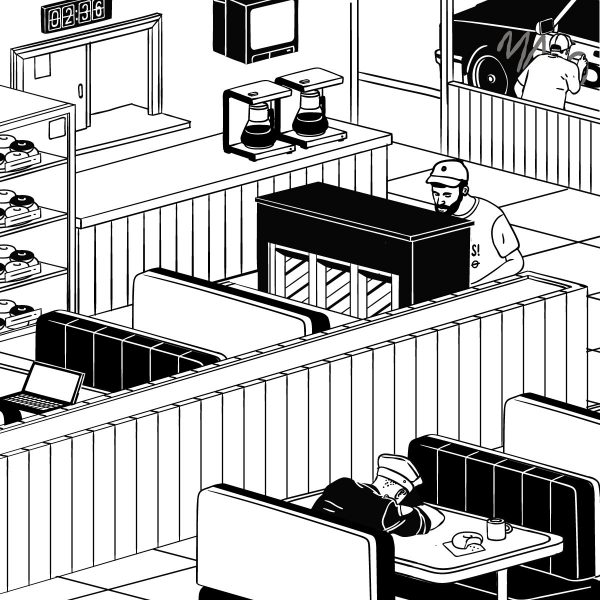 Sketch for ‘Be Encouraged’

The deadline was extremely tight for each of the animations and I was working on other projects at the same time, so I would start each animation a week before the record came out. I’d deliver a black and white sketch by the end of the day on Friday then colour the artwork by the end of Monday then animate on Tuesday to Thursday and the animation would be released at midnight LA time on the Thursday. Several times I was working until about 6:00 am to get the animations finished in time.

You use meticulous detail into your scenes. Can you give a more insight into the production process?

In terms of production process I jump in and out of four or five different programs to make these animations. I draw sketches in Illustrator and get those signed off. Then I draw the full colour artwork in Illustrator including frames of frame-by-frame animation, I crop and arrange background elements in Photoshop then export them as pngs, I assemble frame-by-frame animations in Adobe Animate and export them as png sequences then I comp everything together in After Effects and add textures and effects. If I have to edit music then I’ll do that myself in Audition then import it into After Effects. If parts of the animation aren’t working then I’ll go back and tweak them in Illustrator and Adobe Animate and re-import to test them out. Once I’m happy I’ll export the whole thing in Adobe Media Encoder.

You mention the importance of personal projects focused on your own interests. Can you expand on this, how did you find your own?

I just did things I enjoyed really, I never approached personal projects as a way of furthering my career. While at school I began to teach myself how to use an old application called Flash to make short animations, then this developed into making websites when I was in university studying film. Then when I started work in a web design agency I started drawing as a way to unwind and as an outlet for creative ideas I couldn’t realise in my job. Each time I’ve taken up something as a hobby or a personal project it’s because it offered a kind of counterbalance to whatever I was doing full time and I guess scratched certain creative itches that my job or studies weren’t reaching.

The move to Sweden sounds like an important decision in your own personal development – would you encourage others to live remotely?

Moving to Sweden has been great but it wasn’t really part of a plan, my girlfriend got a job out here so I moved with her. Work-wise it really hasn’t changed my process at all, I worked remotely in London so I do the same out here, though with maybe a few more Skype calls. Really it’s highlighted to me how lucky I am to be able to work remotely as it’s not something that would have been so easy even 10 years ago. Out here I live next to a lake whereas in London I lived on one of the busiest roads in East London so I’ve enjoyed the change of pace quite a bit even though it’s just temporary. 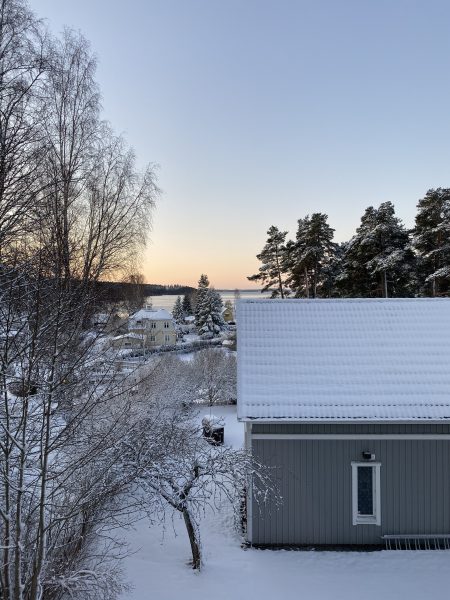 How you incorporate mood into a design?

I think detail is the key. To take the Kiefer project as an example, one of the animations had Kiefer playing the piano on a subway train. When you’re on a subway train there are so many things happening around you that you’re subconsciously aware of but might not be paying direct attention to, so it’s important to include all these background elements in the animation. Newspapers scattered around the carriage, graffiti on the window, people playing with their phones, a cup rolling on the floor, everyone rocking back and forth in sync as the train wobbles from side to side. When someone watches that clip they won’t take everything in on first glance but hopefully they’ll be aware of all this stuff happening on the peripheries that makes the scene feel real.

What would be your dream project?

It’s always been my dream to design artwork for musicians so I’m very lucky that I get to do that. Certain albums have really come to define different parts of my life, listening back to them can immediately transport me back to a particular time and for me each album’s artwork is inextricably linked to the listening experience. The thought that I have done artwork for music that might go on to be important milestones in people’s lives is very special.

If I had to pick a dream artist to do work for then I’d pick Tyler The Creator as his album Igor was my favourite record from last year. I love that he experiments so dramatically and effectively with sound and themes five albums deep into his career.

Many thanks to Joe for taking part in our interview. You can find more of his work at Website, Instagram and Vimeo!

Make sure to also catch our last Illustrator of the Month, member Helena Covell