Anna grew up in rural East Yorkshire, fascinated by stories and cities. She studied architecture at The Bartlett UCL, where she became increasingly interested in the power of illustration in architecture, and architecture in illustration. She teaches at The Cass and University of Nottingham, and spends any free time drawing imaginary places. 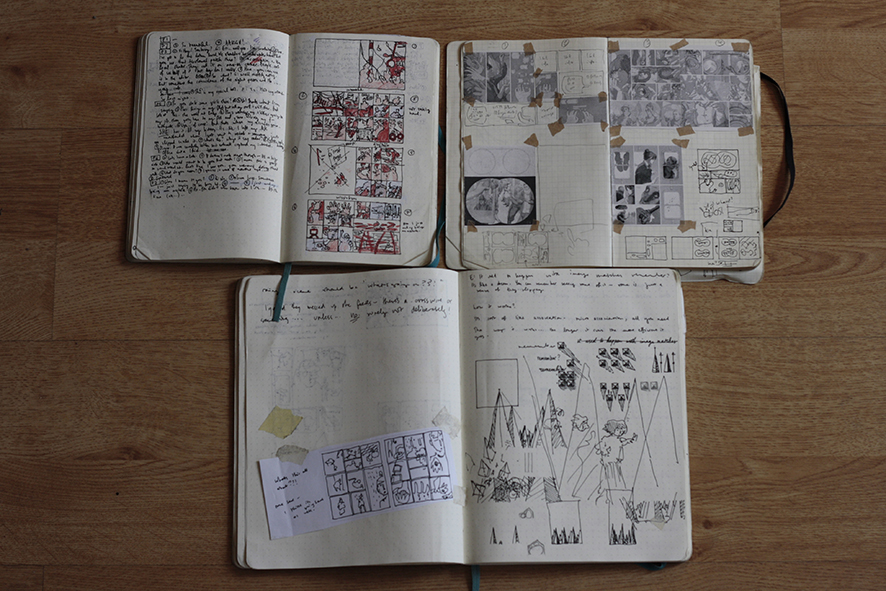 This project came about as a real collision of interests; a love of drawing and stories, and a fascination with cities, spaces and objects, and a combined anxiety and excitement about technology and the future. Over the eight years we worked on the book, it became increasingly clear that large parts of human life were migrating from our homes, streets, pubs into online spaces. These digital spaces were developing characteristics of their own, some are gritty, weird or dangerous, some are polished and exclusive. In this way, the internet has become a digital mirror of our society. We wanted to make a story that explored what might happen in the near future, when those online spaces break free from the screen, and return, changed, to the physical world — submerging the solid streets we’ve always known behind capricious, shifting digital layers and the internet engulfs the city.

This all seemed like something that was particularly well-suited to exploration through the comic book format, a fluid combination of narrative and images, rather than one or the other. I already knew how to draw cities, but everything else we needed to learn as we went along. How to write a plot, how to draw people, how to construct a comic book.

To make a graphic novel that envisaged a near-future city saturated with augmented reality. This new digital layer is a bright, shifting, enticing mirage drawn over the crumbling remnants of the old physical world. In this setting, to explore current trends, cultures, behaviours of the internet by manifesting them as three dimensional spaces, objects and characters, while telling a story that had moments of mystery, comedy, action and contemplation. Use old-fashioned drawing styles to bring the comfort of Golden Age illustration to the alienating sci-fi setting. Deploy colour as a narrative device, and exploit the format of the book and the panel. 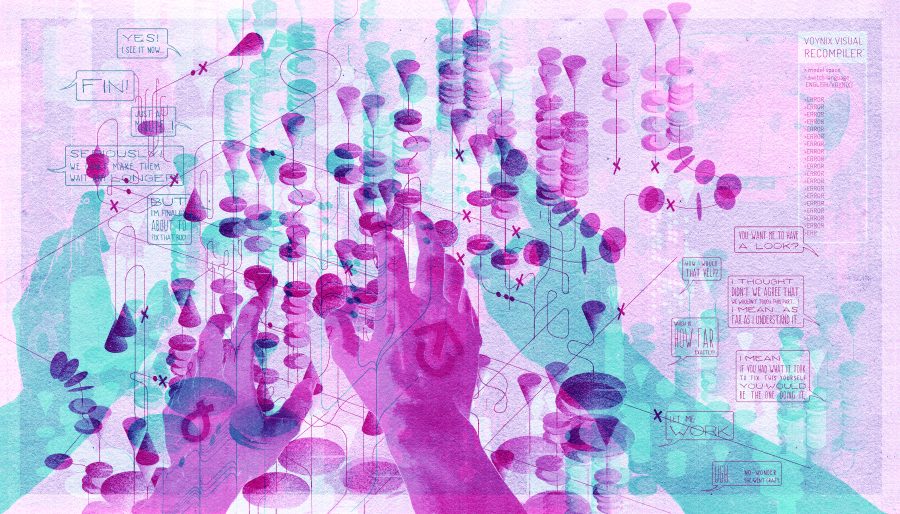 Really extensive research, which was never enough – this technology has been developing very quickly, which made it exhausting to try to keep up.

But good design work often looks backwards or sideways as much as forwards, and often I would look for design ideas in historical and natural forms: clockwork mechanisms, botanical illustrations, circuit diagrams, astronomical charts. The research that was most useful was actually just about writing stories. Watching a lot of films, reading many books and trying to deconstruct them to discover how to write a plot. 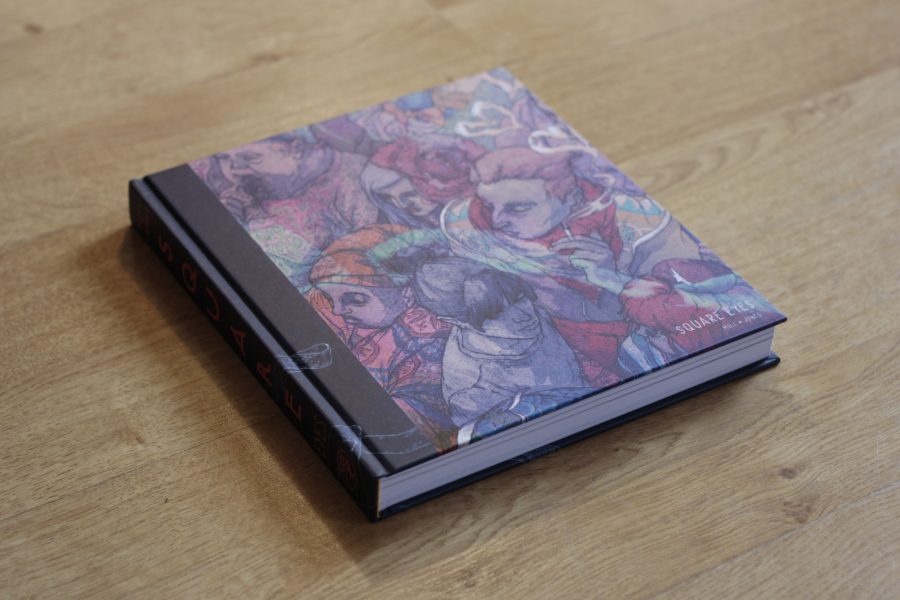 The development work was the longest and hardest part of the process. Iterating between writing and concept drawing with my co-writer Luke Jones to try to get the important elements together. Once we had a script for a chapter, I would break it down into scenes. Then go through a long process of working up each section. Concept sketches for the important images/actions, then fitting together the jigsaw puzzle of thumbnails to get everything to work on the page. Reference photos for each image, before finally getting to the real drawing. I couldn’t work on the book every day, which meant that on drawing days I had a very strict schedule. After so much development work, I had only 1 hour 20 minutes to draw the final artwork for each panel.
Numbers

256 pages, with 878 images in the final book, but many more drawn. The book took a total of 8 years. 1 hour 20 minute drawing time per image, 7 images per day. And more than 144 pencils — I bought my favourite pencils in a delightful dozen dozen. Distractions 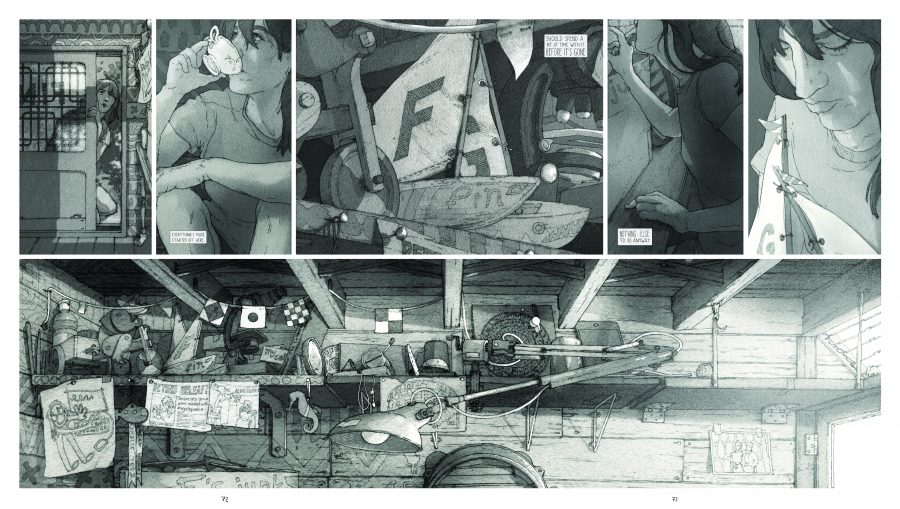 The project didn’t go entirely to plan, and certainly not to schedule. Our original intention was to spend three years on it, but the further we developed it, the more we realised the enormity of the task. We significantly reduced the scope at several points, but there was a certain standard of drawing that I definitely wanted to maintain. Losing that would have meant that my key interest in the project had disappeared, so I just had to knuckle down for the long-haul. I’m not sure I would do it differently, but I’m also not sure that I would do it again. Maybe something shorter. 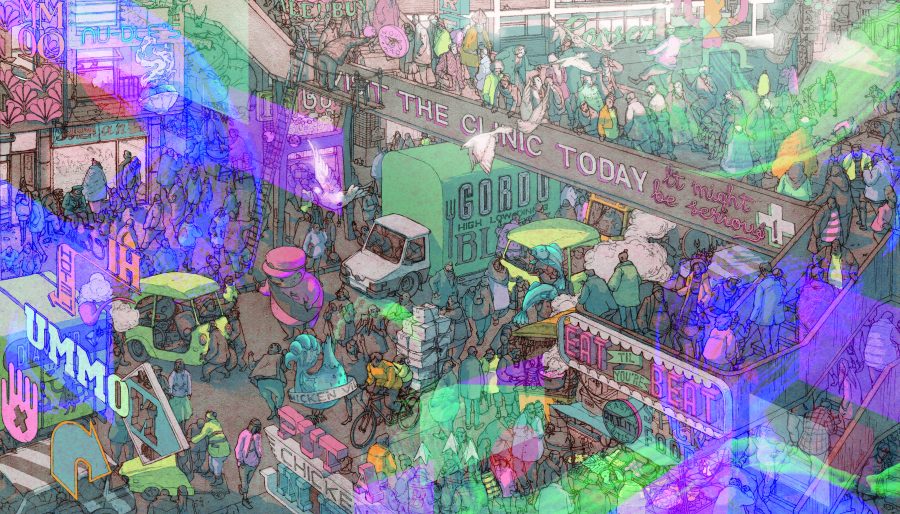 Just work really, really hard. Everything else springs from that. Be interested in the world around you (and make notes). Have good friends who will occasionally make you go to the pub.