News / Reviews / A History of Pictures: for Children – Review

By David Hockney and Martin Gayford 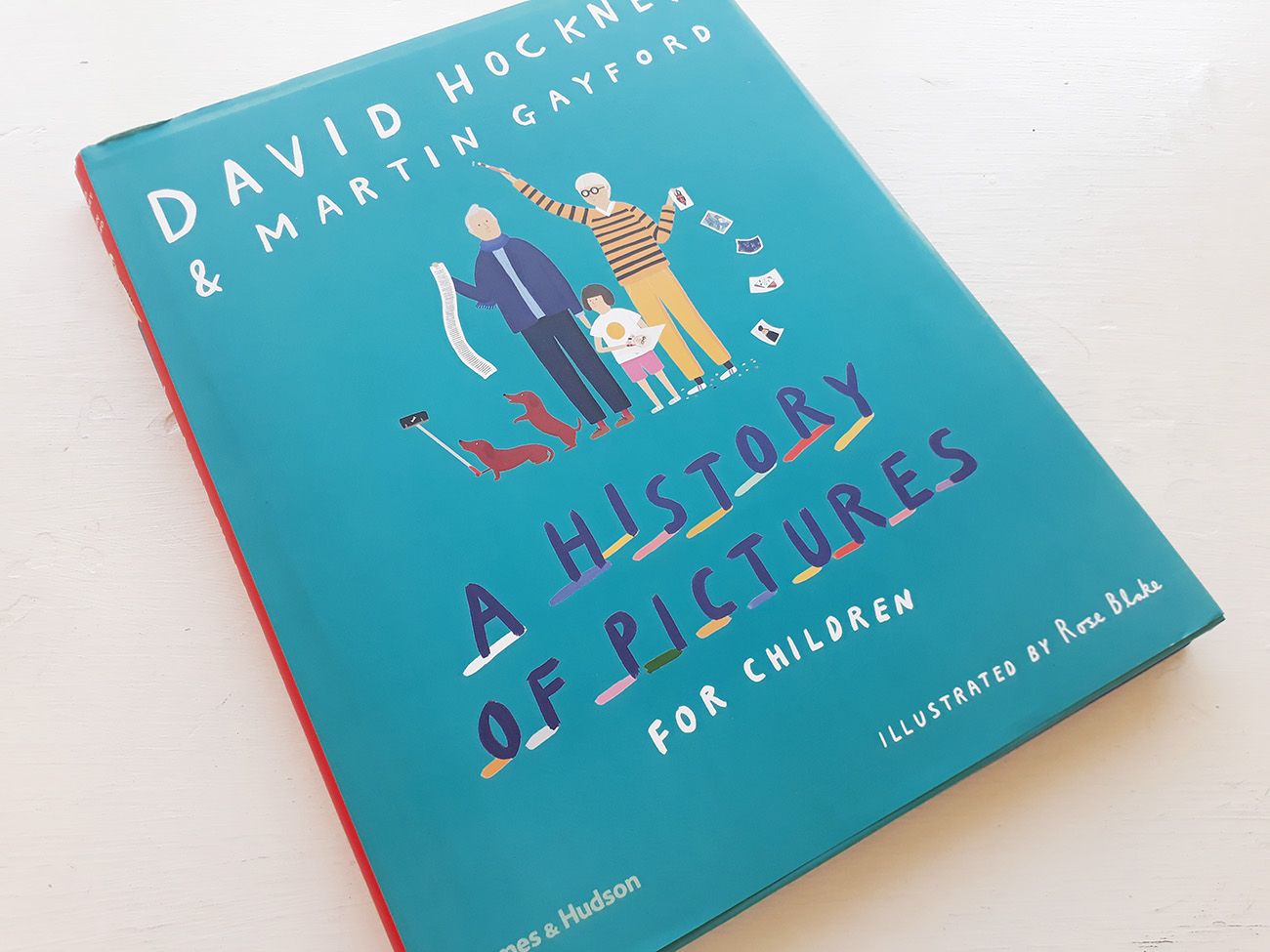 David Hockney is one of the world’s most popular and influential artists of the 20th century.
Art Critic Martin Gayford writes for The Spectator and has written many successful books including Blue Scarf and A Bigger Message.
Rose Blake repped by B&A Reps, is a picture book illustrator and the daughter of famous artist Peter Blake, creating work commercially in Advertising, Editorial and Publishing.

Following its parent edition A History of Pictures: From the Cave to the Computer Screen, this Illustrated book is directed at a new audience – taking young readers through a journey of Art History from 15,000 BCE cave drawings to present day. 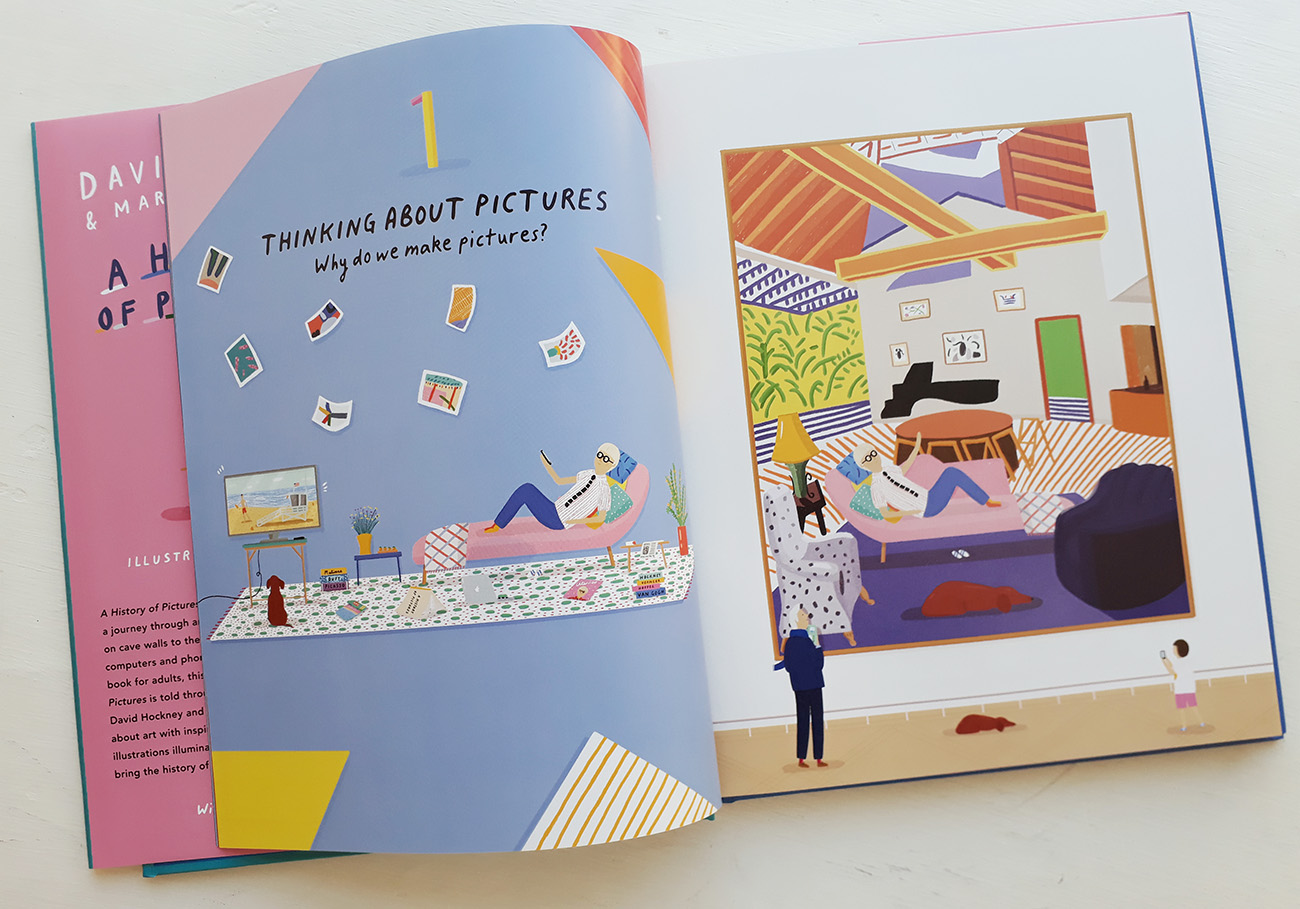 The subject of the book is set out in the present-day environment of a public art gallery, exploring a thought-provoking narrative between Martin and David. Illustrator Rose Blake brings the third dimension to their story. Using her own playful and minimalistic Illustrations to add a lease-of-life into the historical and technical themes and pictures they explore, and introducing cameos from herself, and David’s faithful pet dachshunds.

Although directed at a young audience, the book shouldn’t necessarily be limited to this. The decision to make this resource illustrated is essential (in many sections) for communicating more complex ideas like; What makes an interesting mark? And, What is a shadow exactly? Concepts anyone can appreciate from aged 7 – to 70! 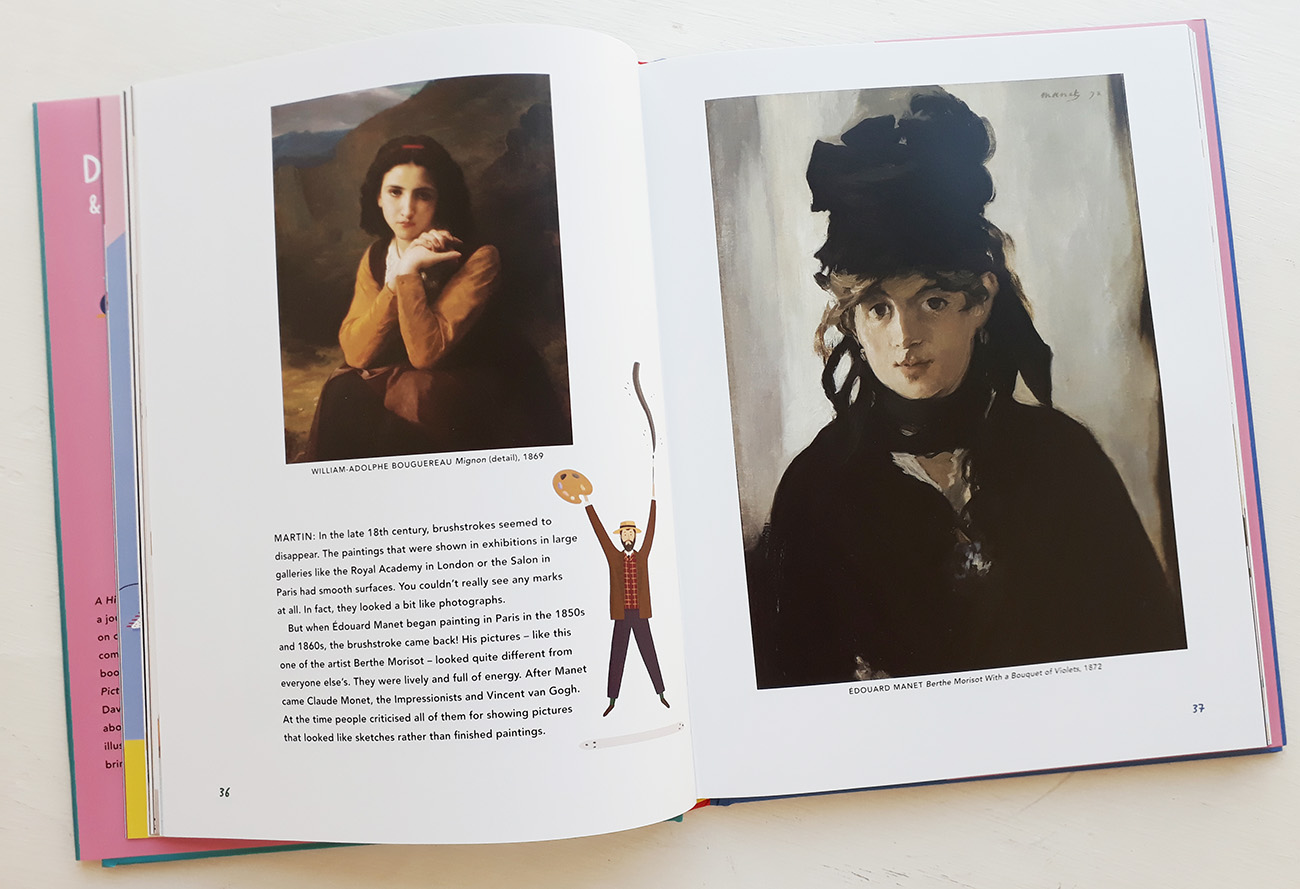 David Hockney “Pictures are all around us: on laptops, phones, in magazines, newspapers and in books like this one. We can see them on the streets and on TV. They hang on the walls of our homes and in art galleries and museums. It is through pictures just as much words that we think, dream and try to understand the world around us.”

Consisting of eight chapters each posing a broad theme and question to explore, an illustrated timeline of inventions, word glossary and final index, this book could be used as a tangible teaching resource for children and adults alike. It should come as no surprise that it has been translated into 12+ languages reaching a worldwide audience, and was awarded the BolognaRagazzi New Horizons Award this year at the Children’s Book Fair! 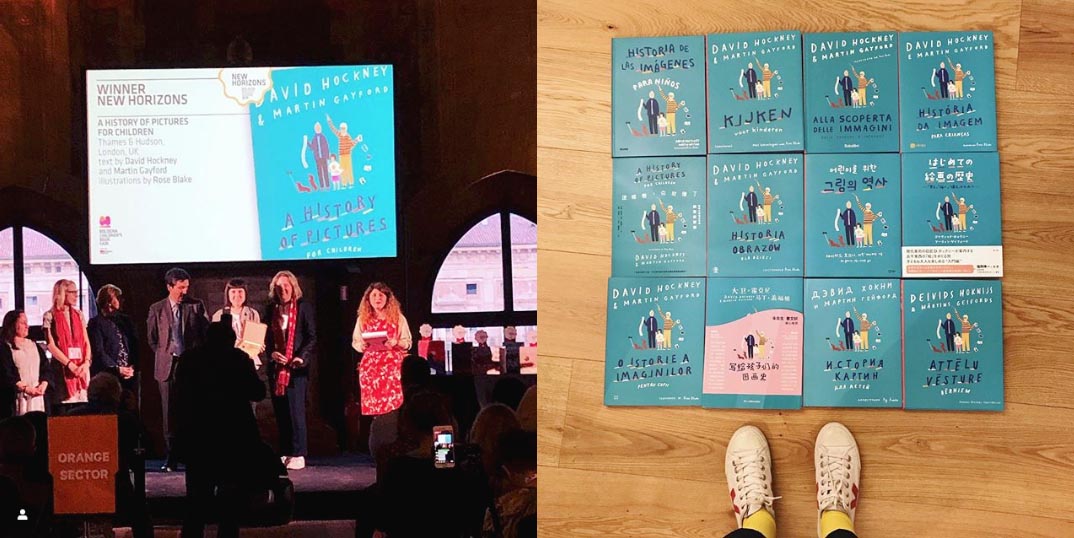 At first look you wouldn’t be alone in thinking this is a children’s fiction picture book, from glancing at the colourful cover and interior spreads. As a piece of non-fiction, it more visually stimulating than readers might expect from a classic educational book, and this mirrors the quality of other published art books by Thames & Hudson.

It’s refreshing to see Rose’s illustrations around historical artworks, provoking ideas and conversation, and this helps to build a relatable scene or explore a single idea. Each page varies from spot illustrations to full page spreads. 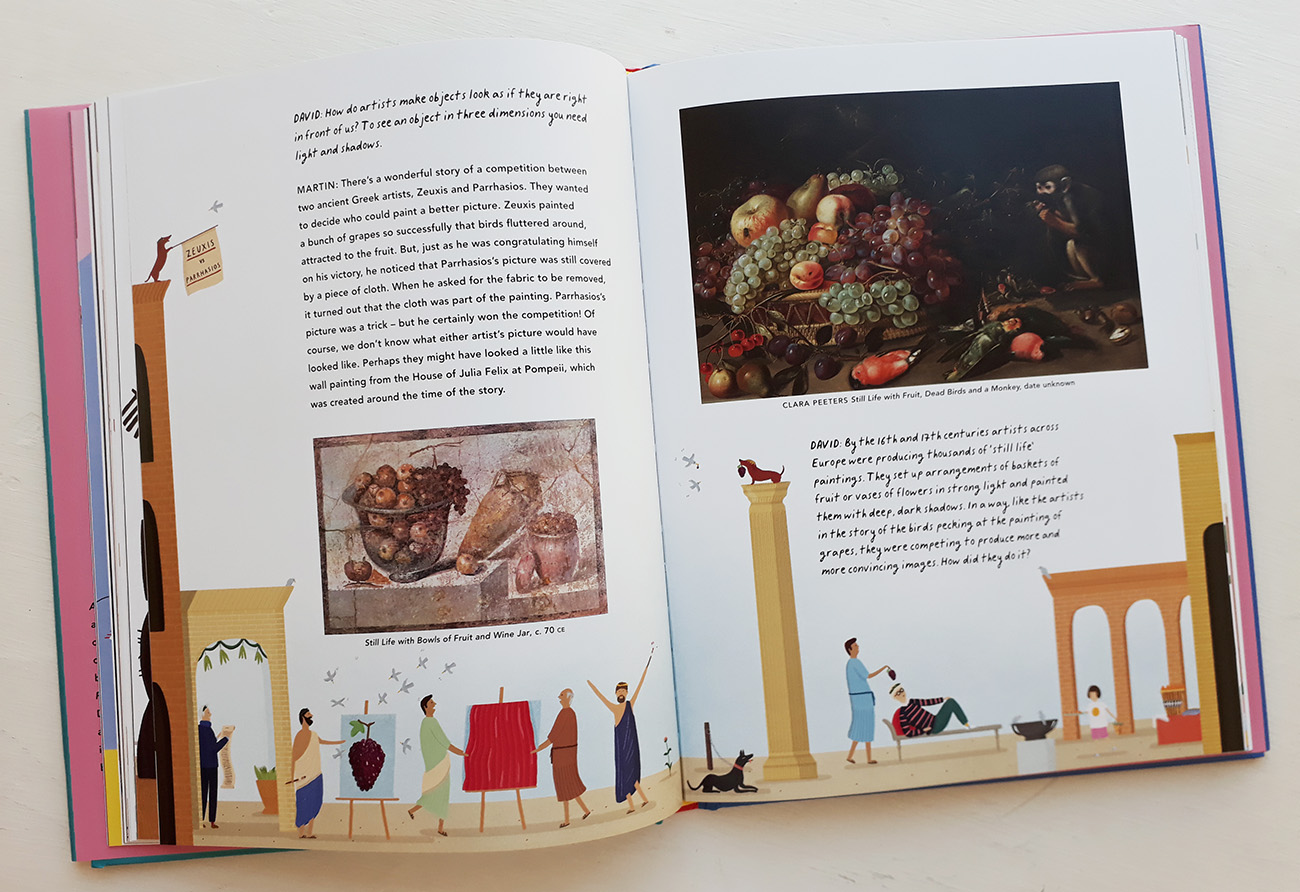 By comparing Chinese painting brush strokes in a clear and simply way, and telling relatable stories about Michelangelo technical abilities, and Claude Monet’s adventures outdoors in the impressionist era, each chapter sets out to make information accessible and art understandable for everyone.

David: “At one time, almost everybody could draw. Before photography, drawing was even taught at the US military Academy because officers in the army had to be able to do it. Engineers needed it to be able to draw a machine. It was the same for 30,000 years. Drawing extremely well is something you need to learn”

Martin: “We know that many famous artists, such as Raphael, Michelangelo and J.M.Turner, began to work in their early teens. It’s like playing tennis or a musical instrument – you need to practice every day….” 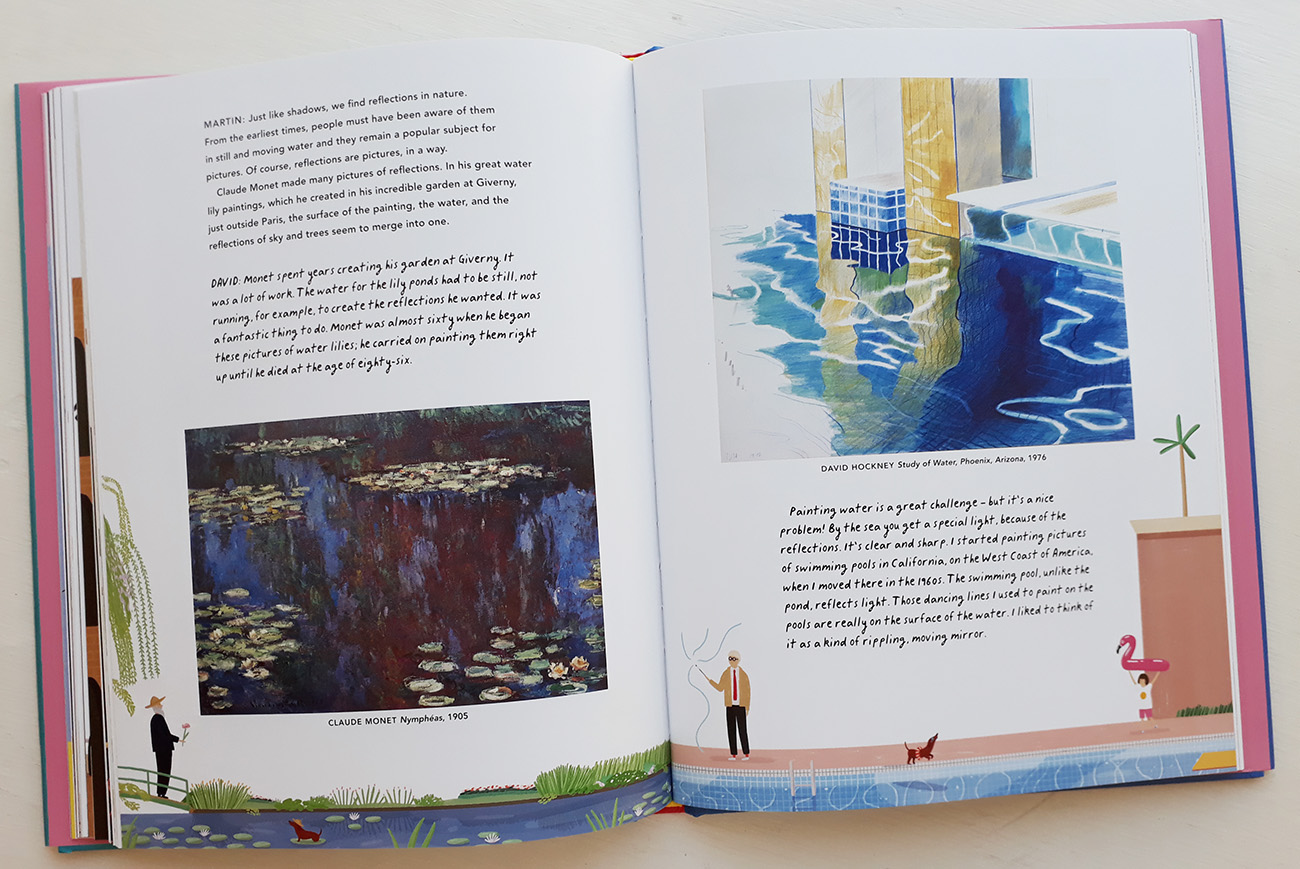 Much detail and attention has been put into the design of this book, the colour theme even mirrors David Hockney’s identifiable soft pastel pinks and blues. The script like font portrays David’s creative voice, where as a more clear-cut text reflects Martin’s art critic voice. They each add their own take on a theme or subject.

No matter your age, if you feel your art history knowledge is lacking, this could be the perfect piece to get stuck into. For the most practical of readers (or parents) it comes in at a substantial 128 pages, with hardcover, but feels lightweight and versatile enough to carry around in any learner’s school bag, or placed proudly on your book shelf. 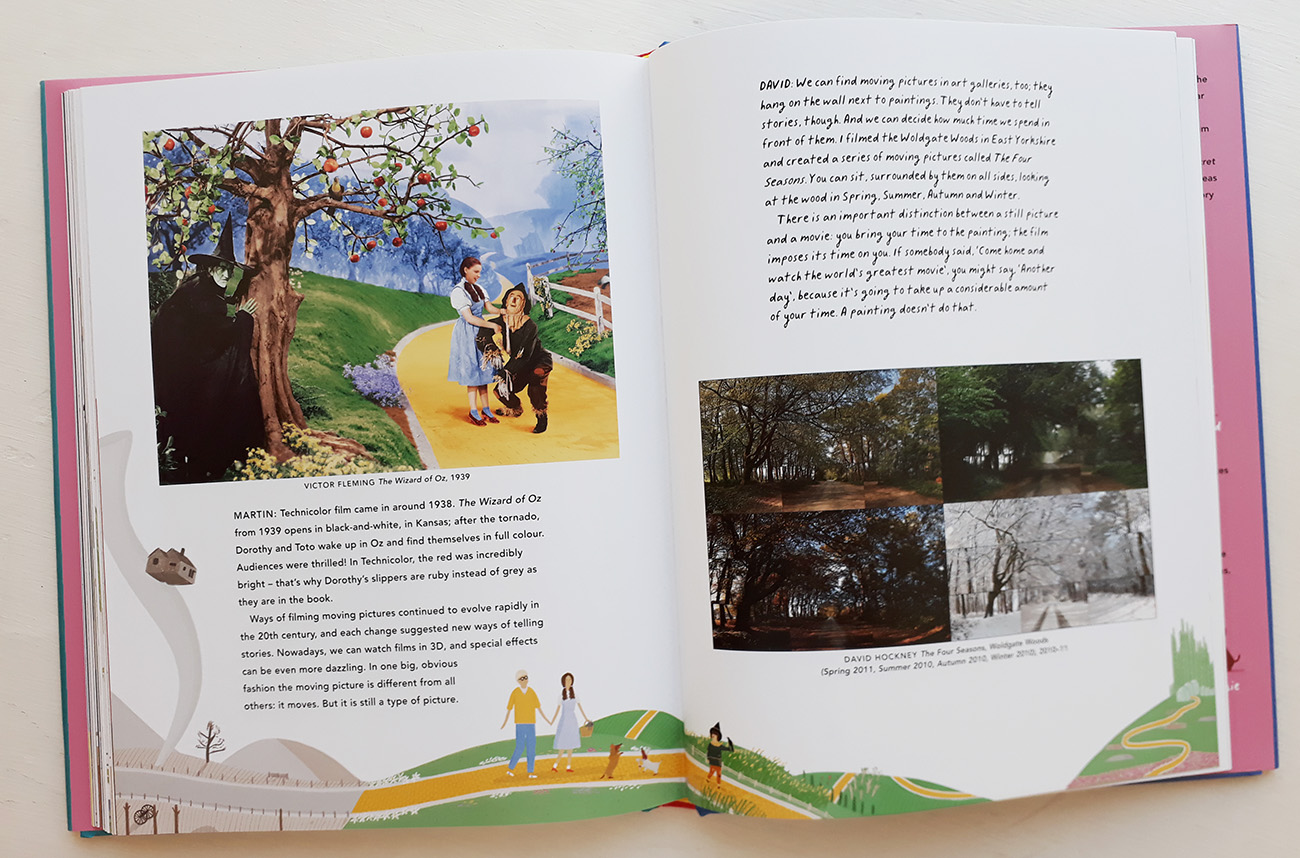