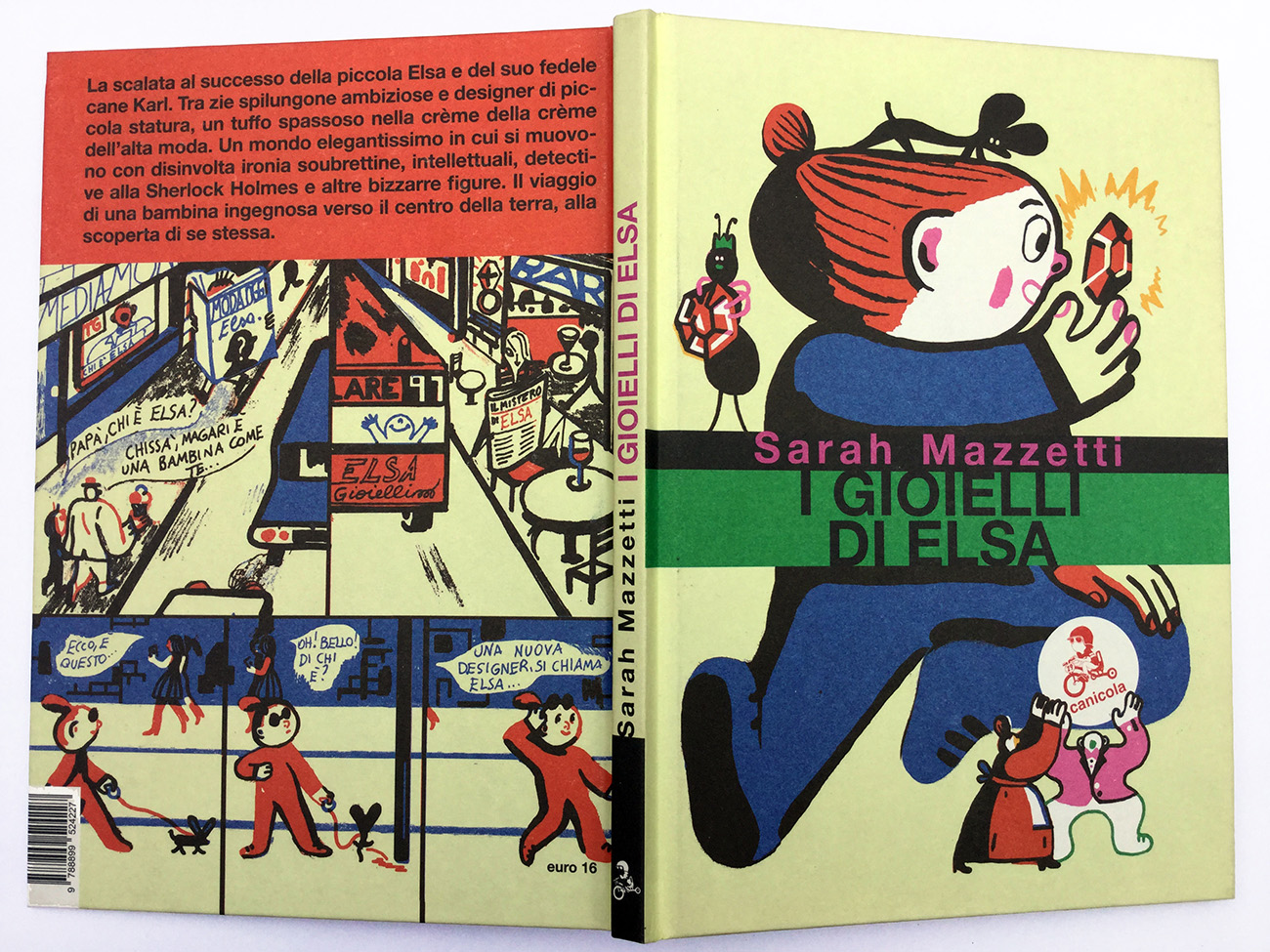 Last year in Bologna during the Children’s Book Fair I went to an opening at Inuit, a small-press running a riso, screen print workshop, bookshop and gallery space. On show were works associated with Inuit’s new editions including botanical drawings from Lo Sguardo Selvatico by Caterina Gabelli, who also had drawings from her book L’Albero on display inside the fair as part of the illustrator’s selection. In the Inuit bookshop I discovered Canicola, local independent publisher and bought from their children’s book collection a copy of Il Gioielli di Elsa (Elsa’s Jewels) by Sarah Mazzetti, also from Bologna. 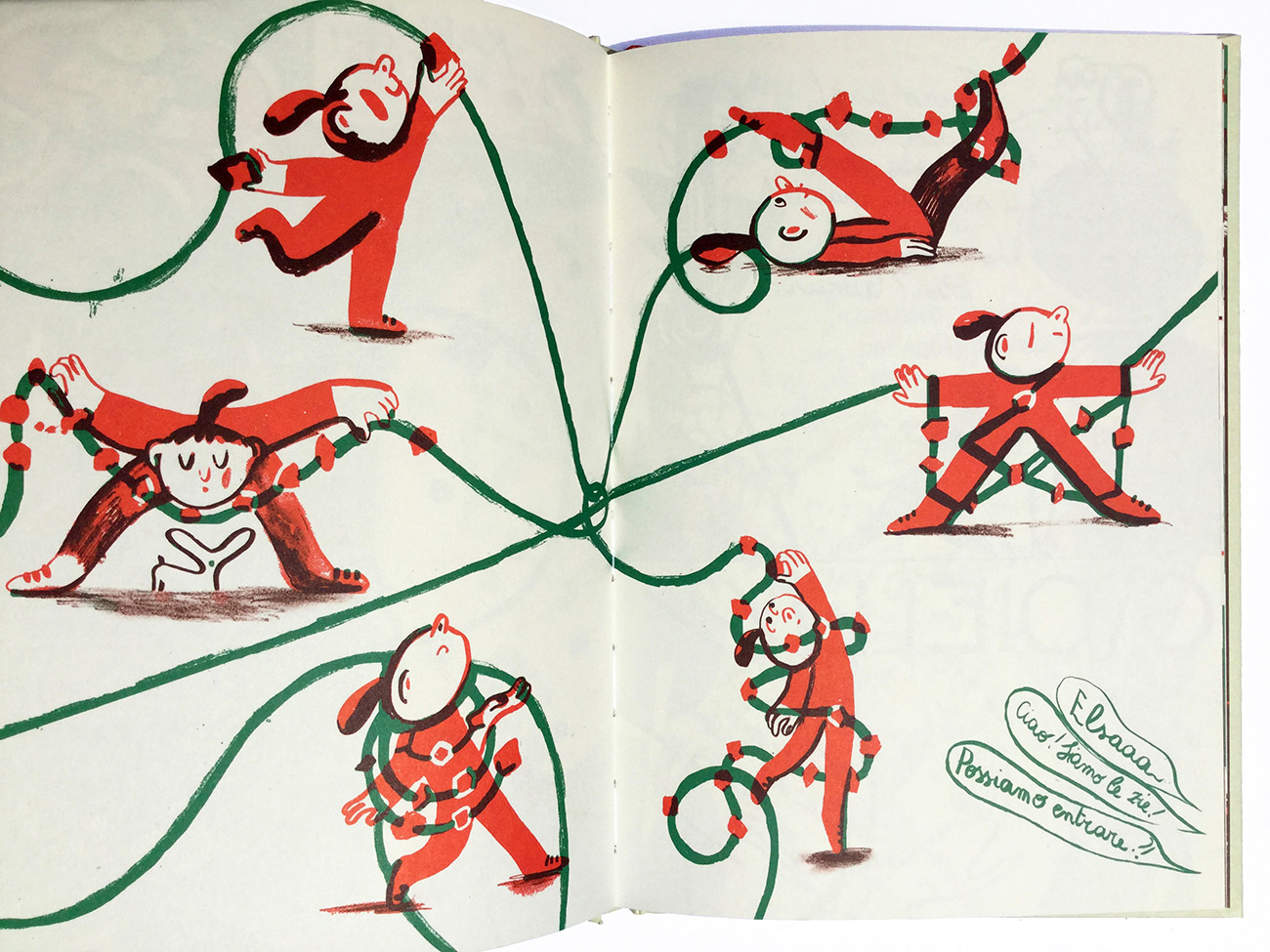 This year it was now Sarah’s turn to have her book showcased in the Fair, in addition to the recognition received by the recent awards at Treviso comic book festival (best kids book), and (best short story) at Lucca comics and games. It went on at Bologna to win the International Award for Illustration. Such popularity is evidence that something very positive resulted from the collaboration with Canicola, whose editorial position is well presented on their website and includes the following observations:

“In children’s books, tradition and experimentation are mixed with intentions of openness both in the visual and in the narrative.”

“The imagery of Canicola productions often gravitates around the margins, most of which are works that arise from important narrative needs. Expressions that strongly define who makes them.”

Exploring the potential of the picture book to convey a strong, often complex narrative has been the motivation behind Sarah Mazzetti’s joint publishing project, Teiera, with Giulia Sagramola and Cristina Spanò. Teiera’s comics and illustration fanzines have mainly focused on collective projects involving a selection of their favourite illustrators working around a central theme, such as the Infusi alphabetic series, Afa (sultriness), Brussio (buzz), Cicles (cycles). The result is a richly creative, curious and exuberant mix of ideas and approaches uninhibited by the stereotypic notions of categories, labels or reader’s age. 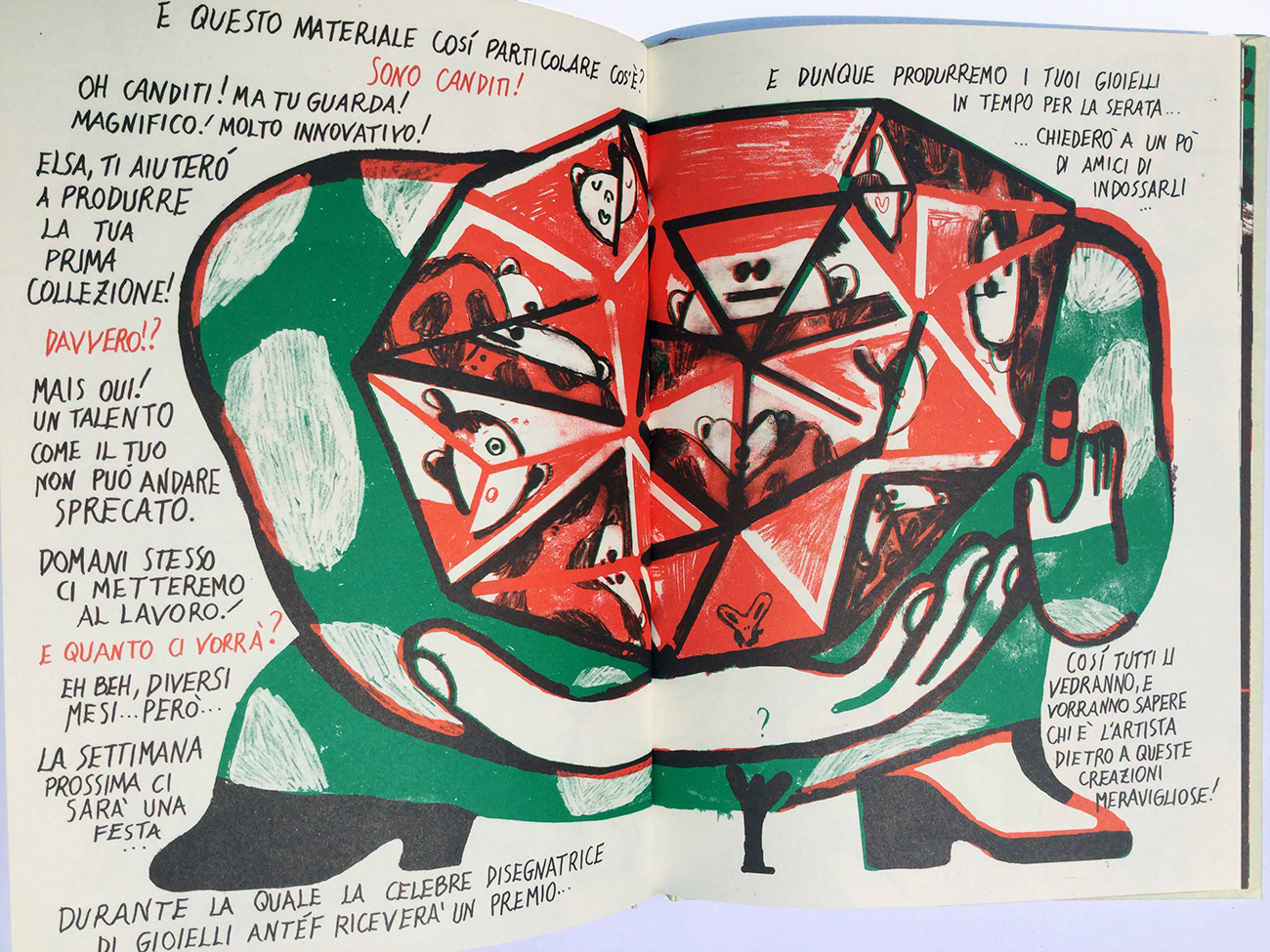 This is the background to Il Gioielli di Elsa in which Sarah brings to the fore her skills worked out through a constant experimenting with colour, form, physical, abstract, individuals, society through the pages of her sketchbooks; drawing walkers-by in the streets of New York, cartoons on tv as a kid, the fashion catwalks of Milan. High- and low- brow equally consumed and rethought; graphic art, fine art, history of art are jumbled up and redrawn as if in preparation for a riso fanzine edition. 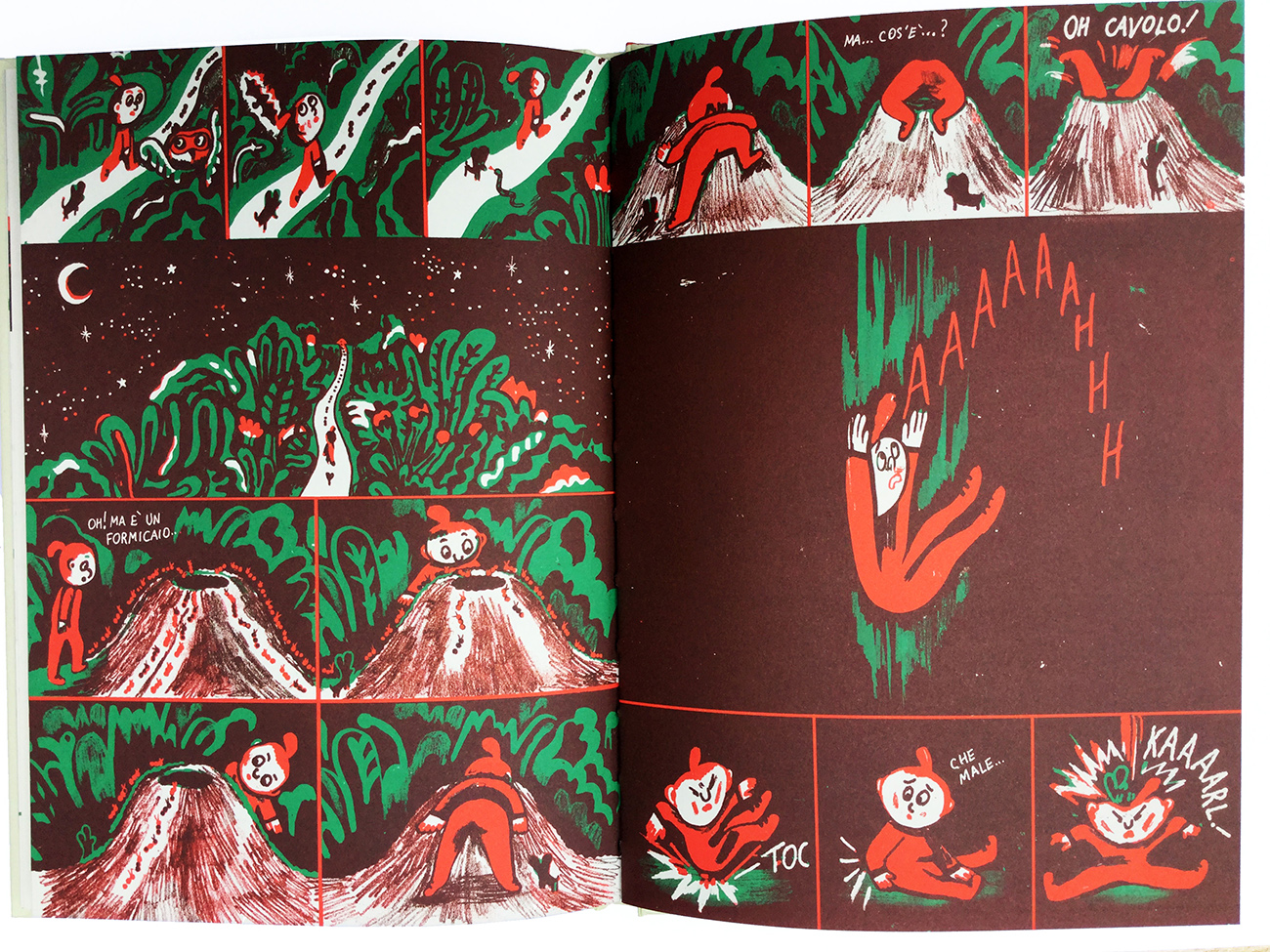 Elsa’s story is born out of the nostalgia for the childhood fantasy of becoming a famous jewellery designer. Dominating every Christmas table in Milan is the Panetonne, a tall, yeast cake studded with candied fruit that becomes the centrepiece of Sarah’s dream. The story begins with the heroine Elsa sharing a giant panettone with her pet dog Karl, they share the candied cherries: one for Karl, one for the pot… Elsa hides away her treasures until the day when she has the idea of making jewellery with them, necklaces and bracelets, and it’s not long before her talent comes to the attention of the famous French jewellery designer JJA who commissions her first collection.

Fame and fortune ensue, and the dream continues until the day Elsa arrives in her atelier to discover that her entire stock of Panetonne has been stripped of its priceless cherries, her atelier’s sole source of production. Elsa is ruined, penniless and wanders the streets until she happens to meet an old plastic bag who takes pity on her and offers her information on the whereabouts of her lost jewels. 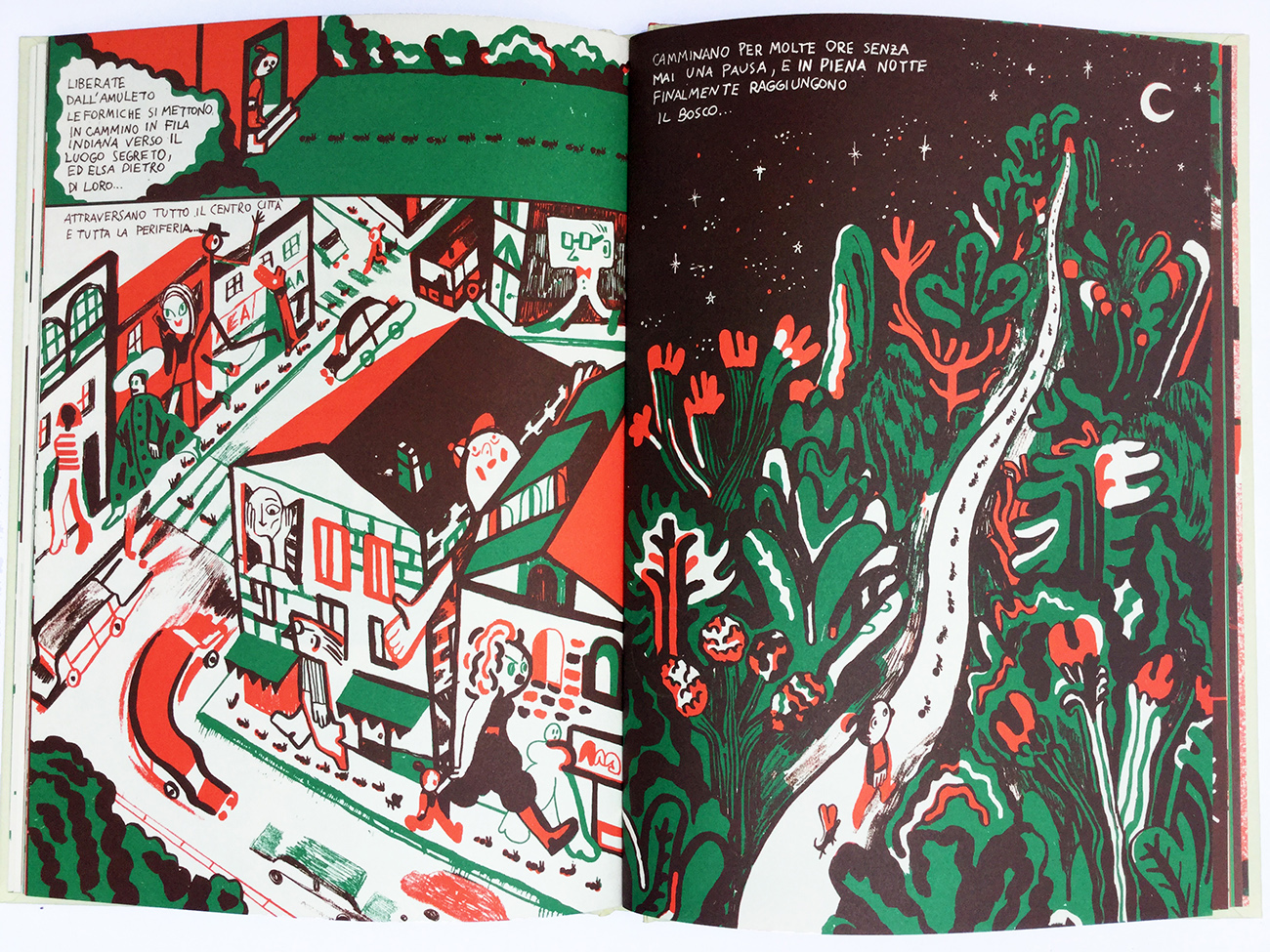 It is a children’s picture book in that it’s written for children, but equally for the child that we hope to grow up to be. It is free from the sentimental notion that curiosity, adventure and creativity belong only to our infant years; best seen and not heard. We don’t have to bend down or pick her up to listen to what Elsa is saying, she needs neither our condescension nor our permission before acting, she trusts her own intuition. Like the best children’s book heroes Elsa is as smart as any adult, even more so; a world-class designer, international company executive, top detective, friend of the homeless and nature lover… 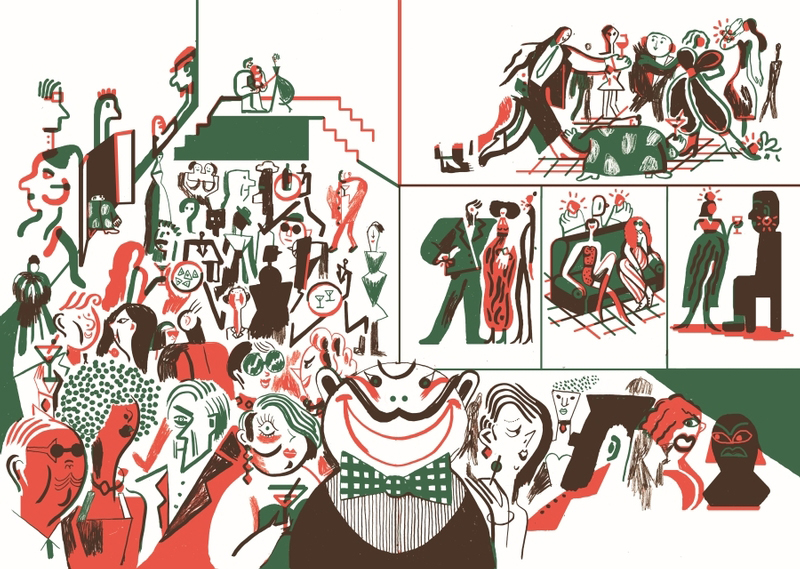 With just two colours “to keep thing simple” Sarah demonstrates her ability as an editorial illustrator to describe complex narratives simply. Her pictures remix piles of cinema, literary, art references, continuously reworking ideas, turning them upside down and inside out. The sketchy quality of the drawing knocks any overly indulgent edges off of the block to keep our attention focused on the story. In certain spreads where the image does most or all of the talking (the new collection opening night, or when Elsa follows the ants out of the city) the result is nothing short of sublime. This is a picture book then whose strength is its inclusivity; it speaks to all of us, and its simplicity, telling a complicated story with much ease and joy, and humility too, it’s such an unassuming gem of a book!