Kate Milner has won the 2018 Klaus Flugge Prize for the most exciting and promising newcomer to children’s picture book illustration. She won for her book My Name is Not Refugee (Barrington Stoke), which follows a young boy as he and his mother set out from their home to find somewhere safe to live. 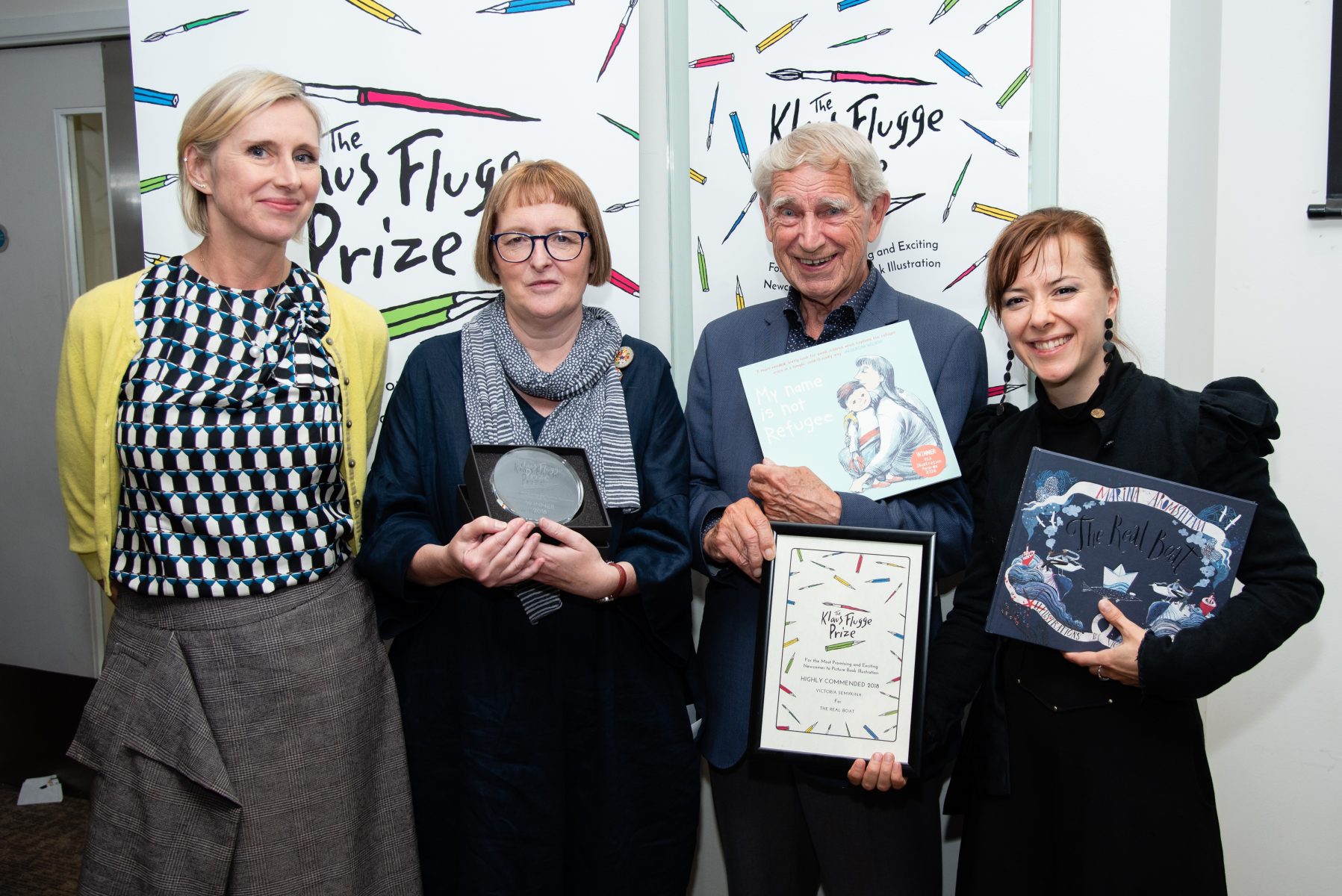 Although Kate studied illustration at St Martin’s College as a young woman – and illustrated magazines on Commercial and Housing Law for a while – she then spent most of her career as a librarian, developing a passion for children’s books in the process.

But cuts to the library service resulted in her losing her job, and that prompted her to apply to do an MA in children’s book illustration at Anglia Ruskin University. She created the story that was to become My Name is Not Refugee as part of her degree show, and with it won Student Illustrator of the Year in the V&A Illustration Awards.

Winning the Klaus Flugge Prize marks her out as an important and extremely talented illustrator with a very special gift for creating picture books.

Judge, Children’s Laureate Lauren Child says: “The questions My Name is Not Refugee asks us to consider help us to think ourselves into someone else’s shoes. And the illustrations do just what they should, allowing the reader time to contemplate the predicament of the storybook child, a chance to imagine and to empathize.”

The Klaus Flugge Prize was founded to honour publisher Klaus Flugge, a supremely influential figure in picture books. Flugge set up Andersen Press in 1976 and has discovered and nurtured many of today’s most distinguished illustrators including David McKee, Tony Ross, Satoshi Kitamura and Susan Varley.

Kate Milner said: “I felt absolutely amazed and delighted when I heard that I’d won. I was very, very pleased to be shortlisted but I explained to everyone at the time that there was absolutely no chance of me winning. I was quite clear about this. When I got the good news I was alone in the house apart from my son who was still asleep. I was beside myself with delight; he didn’t get to stay asleep long.

I have done all sorts of things in my working life. I have painted pub signs and made prints; been a teacher and a carer. I have always made images and thought up stories, but it was a job at the local library that changed everything for me: I fell in love with children’s books.

Victoria Semykina was awarded Highly Commended for her illustrations for The Real Boat (Templar). Lauren Child said: “Here is illustration that is not only exquisitely decorative but also uses the page to great effect. There are many original viewpoints, crops and changes of scale and these beautifully carry the reader across the storybook seas.”

The full shortlist was:


Alongside Lauren Child, the judges were Goldy Broad, Charlotte Colwill, of Foyles bookshop and 2017 Klaus Flugge Prize winner Francesca Sanna. Julia Eccleshare, director of the Children’s Programme at the Hay Festival, is Chair of the Judges.