Encompassing printmaking, illustration, fabric design, painting and wallpaper design, this book on the distinctive artists who made the Essex village of Great Bardfield their home from the early 1930’s is visually and biographically engrossing. Illustrators, in particular, will find imagery that delights in detail and atmosphere; the seemingly everyday either faithfully recorded or translated to the abstract.

Editors, Gill Saunders and Malcolm Yorke, alongside their own texts, bring together writers who discuss the lives and works of the artists, including AOI Patron Chloe Cheese, daughter of illustrators and printmakers Bernard Cheese and Sheila Robinson, two of the artists who were part of the Great Bardfield community. 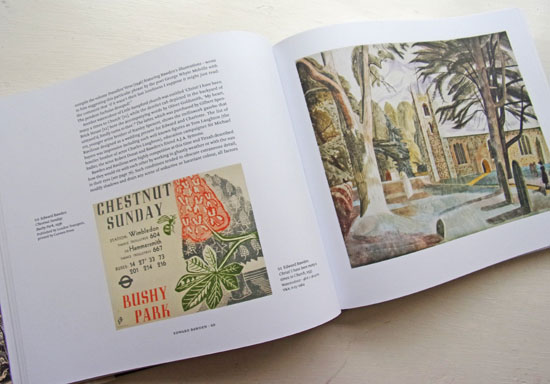 Discovered by Edward Bawden and his friend Eric Ravilious in 1931, Great Bardfield gradually attracted other creative people drawn through their connections to those already there: Kenneth and Diana Rowntree, Michael Rothenstein and Duffy Ayers, John Aldridge, Michael Rothenstein, Walter Hoyle, Cheese and Robinson and Marianne Straub.

Although several of the artists were influenced by Bawden’s output, there is a rich variety of artwork from all the artists profiled, from paintings of the surrounding buildings and countryside, illustrated letters, wood engravings and linocuts depicting domestic scenes and landscapes, to woven fabrics and book illustrations. Bawden and Ravilious (especially after the 2015 Ravilious exhibition at Dulwich Picture Gallery) are the more well known artists, both creating illustrations and works to commission alongside personal work, and the influence of their watercolours can be seen across contemporary illustration. Attractively designed, the book’s large format give space for images to breath, and textures on prints and paintings are clear to see, provoking admiration for the craft of those discussed.

The profile of the Great Bardfield artists were raised by a series of successful informal open-house days which encourage thousands of art lovers (and the press) to the village to see their studios and homes. Textile designer Straub’s Trinity Cottage was given a spread in the June 1956 issue of House Beautiful, who commented that she had ‘given new life to her charming home’. It can initially appear to have been an idyllic situation, creating work from home (although often with no hot water or heating), surrounded by like-minded people (and bemused villagers), but events such as the Second World War intruded, and relationships and fortunes fluctuated for most of the artists living there.

The book covers the artists’ on-going lives after they leave the village following job offers, the breakdown of relationships or just moving on, and there’s a sense that the halcyon days are long gone before John Aldridge, who had remained a resident, died there in 1983. Readers are left with a strong impression of the picturesque village and its artistic inhabitants, and the significant legacy of of their multi faceted contributions to the art of the period. A book which I feel I’ll return to.

Chloe Cheese told Derek about her experience of writing about Sheila Robinson and Bernard Cheese for Bawden, Ravilious and the artists of Great Bardfield:

‘The generation of lesser known artists which my parents belonged to suffered a bit from the glamourous Sixties sweeping away previous lesser known work.

I have spent quite a lot of time over the last two years getting together my mother’s archive from a large heap of things I had in the plans chest and boxes here and there. My father, Bernard, died quite recently so I was asked to write about them both. Their marriage was short, but I got to know my father later on as we both made lithographs and sometimes exhibited together.

I am also finishing a short account of my mother’s work for The Fry Gallery in Saffron Waldon. I had no intention of writing anything at all and writing the V&A book was difficult as usually I express myself in pictures. I had to find a way of seeing the past from a slightly less personal perspective, so read round the period extensively and checked facts. I decided to write about my mother as she left no published thoughts on her own work, and I am the only person still alive who can write with any authority about her, so knew I should try. My daughter has helped me (who also went to the Royal College of Art – 3rd generation) and found it enlightening, as she did not know my mother.’

Drawn Direct to the Plate