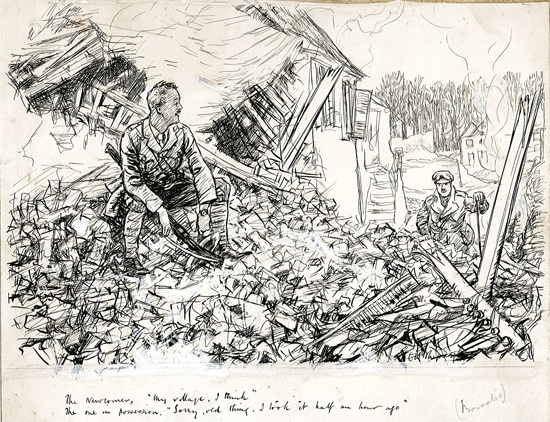 The Newcomer. “My Village, I Think?” by EH Shepard. Artwork from The Shepard Trust archive. Reproduced with permission of Punch Ltd.

Ernest Howard Shepard is one of the most significant illustrators of the 20th century, best known for his drawings of Winne the Pooh and The Wind in the Willows as well as his regular work as lead cartoonist for Punch.

EH Shepard: An Illustrator’s War is the first ever exhibition to show Shepard’s illustrations from the trenches during his time as a Royal Artillery officer in the First World War. (This show comes highly recommended by AOI – excellent drawing, great observational skills and funny cartoons too, Shepard had impressive skills which all those involved in illustration will appreciate)

The exhibition brings together over 100 original artworks – many never seen before – including personal sketches from the pocket books Shepard kept throughout the war and unpublished correspondence between Shepard and his wife Florence, which he often illustrated with portraits and pictures of his sleeping quarters. It will also include personal items including his paintbox, articles of his uniform, his maps of the trenches and photographs from his family collection.

As well as recording his experiences Shepard continued to work as a commercial illustrator throughout the war – even while serving as an officer on the front line and taking part in the battles of the Somme and Passchendaele, where he was awarded a Military Cross for bravery. EH Shepard: An Illustrator’s War will feature work produced and sent back from the trenches for Punch and other publications. 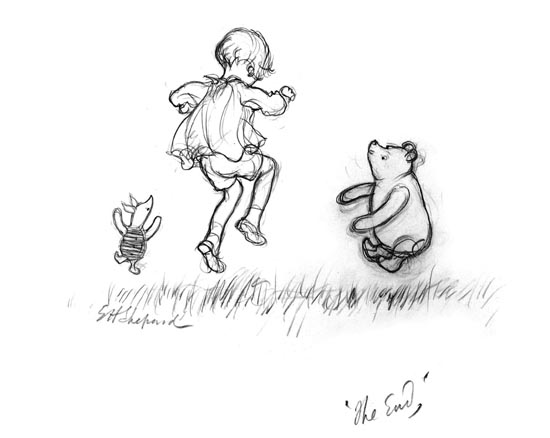 Preliminary sketch for Now We Are Six. . Artwork from The Shepard Trust archive. Reproduced with permission from Curtis Brown