Why did you make this work:
Comedian Zack Fox's manager reached out to me and asked me to create a promotional poster for Zack's first headlining stand up show in his hometown of Atlanta. I wanted to capture Zack's absurd public persona and for the poster to have the feel of that of a concert's or an Evel Knievel-esque show.

How was the illustration used:
The poster was used both online and around the city of Atlanta to promote the show.

How did you make this work:
I made this in Photoshop. The imagery used was intended to be a reference to pieces of Zack's public life to those familiar with it, but also as an introduction to those who are not.

Biography:
Zack Rosebrugh is an illustrator based in Los Angeles, California. After having spent two years as an English teacher, Zack moved to Los Angeles in early 2019 to pursue art full time, and has since worked with companies such as Adidas, Buck, Dropbox, Google, and NBC News. His work is eccentric but accessible, using bold colors, playful shapes, and humor to communicate meaning. 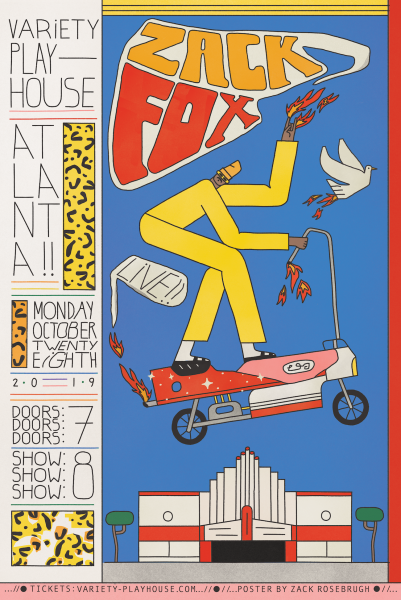