Process: After producing quick studies and observations of people in parks throughout Sydney, I developed from my sketches a series of watercolour paintings on large paper. Focusing largely on the shapes and composition, I blocked in each colour individually, building up on the sketch.

Formats: Initial ideas for the project were made quickly in a sketchbook with pencil.  I developed the ideas onto watercolour paper using watercolour paints, then scanning in on photoshop to make minor digital adjustments.

Brief Requirements: Recently moving from the UK to Sydney Australia, I was surprised at how much time people spent outdoors in the beautiful, warm weather. I became fascinated with the expansive parks scattered across the city, where people would flock to indulge in the small pleasures of everyday life.   Escaping for a morning coffee or lunch break; taking a moment to catch up on reading; sketching or just soaking in the sun – the city parks were full of people stuck in pleasant little routines.   From walking dogs, reading books, enjoying a take-away coffee or iced latte; I became immersed in the detail of individual's habits.   What began as my own little habit of 'people watching', developed into a series of quick sketches in a number of sketchbooks.   I found the concept so simplistic and understated that I decided to develop more detailed depictions of the unique routines I had come across.

Key Brief Ideas: Influenced by the vibrant colour of the Australian landscape, I wanted to reflect the same sense of brightness and liveliness felt within the depths of the city parks.  Despite all the hustle and bustle of the city streets, the parks (often sandwiched in between large industrial offices) were a tranquil oasis.  I wanted to create an essence of calm by creating snapshot images of each character. The viewer is drawn in to the small detail of what the individual is doing – what they are wearing, who they could be. I emphasised this by surrounding the characters in white space.  Creating a strong sense of character and personality was important to me, to make the illustrated characters intriguing. To want to draw you in into the quiet moments of every-day normalcy.  Using expressive shapes and fluid line as an aesthetic quality was something I considered very carefully. The composition and shapes really helped construct the emotive sense I was aiming for. 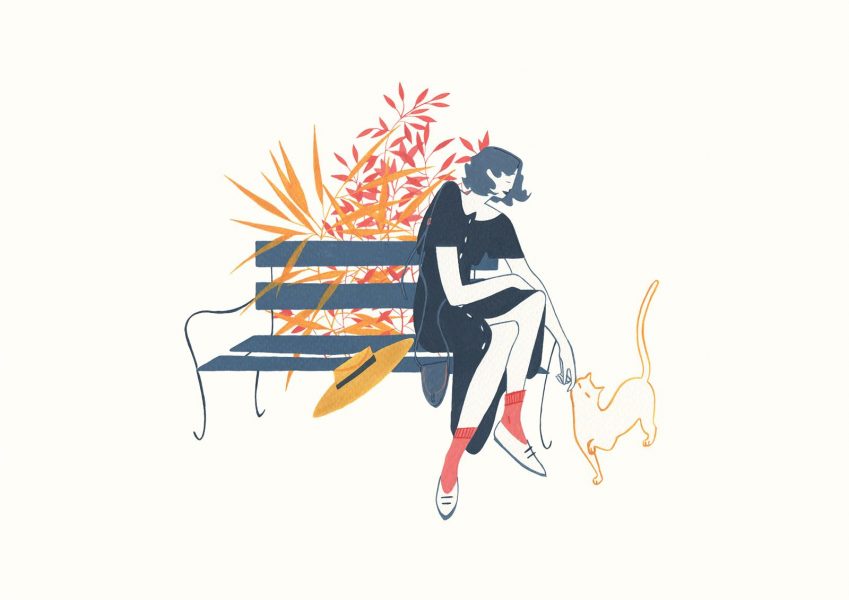