Commissioned by Soledad Poirot for Ministry of Culture of Chile

Diego Becas Villegas (1982) is a Chilean designer and graphic thinker who specialized in handmade posters. He has developed his art in several cultural themes such as opera, theatre, dance, film and music with a special emphasis in politics and social matters.

He was nominated for an award of Excellence in Graphic Design 2014, Chile.

His posters "Small Places, Art not Home" and "Home, Human Rights" have been featured in the Decorative Arts Museum at the Louvre.

At the same time he was selected for the Moscow Global Biennale of Graphic Design Golden Bee with his work related to the series "Paralympic Games" and "Small Places, There are Homes."

He has collaborated with the Polish studio SE-MA-FOR, a well-known office that has won two Oscars for their work in animation (1983 and 2008). Diego worked with them in the design of 2 posters made to celebrate their short film Peter and the Wolf, Oscar winner in 2008.

His work has been highlighted in several international biennials of posters, in countries like Italy, Belgium, France, Russia, Ukraine, Turkey, Mexico, Bolivia, Peru, USA, Venezuela and Chile, with a total sum of 25 exhibitions worldwide.

He is currently working on an exhibition for the Plakatu Polskiego Gallery in Krakow, Poland.

At the time he continues developing his thoughts regarding the human condition, mistakes and success of the world nowadays. He can communicate and translates his thought thanks to a rectangular piece of paper called poster.

The AOI Award obtained for his piece of work "Nicanor Parra, 100 years" is the first through in his entire career

“Diego Becas creates work of immense energy and passion. His work is not just skilled and beautiful but also makes important and poignant comments on the world that surrounds him.

The rhythm and flow of Diego's art is masterful, his passion ripples across the surface of the posters he creates. Diego's playfulness with the strokes of a brush seem so free and effortless but every mark he makes on the page is placed with thought and skilled precision to create a strong, clear message.

Diego is a rare talent with an incredible take on the world, a voice that has to be seen to be heard, his work transcends language”.

This project was created back on 2014 commissioned to celebrate 100 years of the Chilean poet Nicanor Parra. Illustrating his vision of life and cultural heritage. It is a visual tribute in a public space, and actually the only graphic intervention in the country that celebrates him.

The project was exposed in the facade of the Culture and Arts Council of Chile, located in the city of Valparaiso.

Celebrate 100 years of the Chilean poet Nicanor Parra, creator of anti-poetry and brother of the recognised artist Violeta Parra.

Making the life and work of the poet visible to passers-by. Small passages of his life, thoughts, phrases and verses of his poems.

The intervention expresses the passion, vision, irony and black humour, very characteristic of the poet. Parra is presented as a character, constructed from his own myths, faceless, represented with a large heart as a mask.

The heart of life, love, death and poetry.

Images: Black cardboard intervened with white acrylic paint. Handmade and cut out letters, and texts in a very expressive calligraphy.

Nicanor Parra is the oldest of all living poets in Chile, with his graphic work, sculptures and "artefacts" which he has developed along with his poetry. He is also professor of mathematical physics, it has been postulated on 5 occasions for the Nobel Prize for literature and Cervantes Prize Winner Hispanic letters.

The great visual legacy of Nicanor Parra (member of one of the most creative and influential families in Chilean history, composed by Violeta, Eduardo and Roberto Parra) has no equal in the Chilean literature, or the world. His legacy is so great that when you start reading and getting to know his work you get blown away by questions.

The only element taken from the graphic work of Parra is the drawing of his heart. He created this on a cardboard tray back in the ´80 decade. The heart has become an icon when we talk about the poet; to see it is to look at Parra. The heart imagen that I am presenting is a personal interpretation of the original heart created by the poet. The idea was not to copy his work, but to create something inspired by Nicanor Parra.

This poet is very famous for his work regarding aphorisms. Sarcastic, subversive, rebel, full of black and ironic humour and always against the establishment. His greatest strength is his capacity of synthesis in every phrase.

The anti-poetry, invented by him, should be graphed by the "anti-graph" which is a synthetic, manual and analogue image in oversaturated, mechanical and virtual times.

Since poetry was written with his hands, it was a constant development of graphics while writing.

Developed a sequence consisting on several isolated and unrelated stories.

With this form of graphic narrative I developed small gestures expressed by this character in different poetic situations. Introducing in a self-portrait, flying with his winged heart, throwing a direct challenge to the mouth of death booby, depths  into the sea in a coffin… small gestures of life, death and poetry. Accompanied by verses and phrases of the poet, which encourage the viewer to want to know his work.

1. Cut the cardboard and pastes it up a colour surface.

2. Create typography on a separate cardboard.

5. Print the material in adhesive paper and install it in the wall.

Timing. This mural was created, since brief arrived, in just 3 weeks. The development of the entire graphic material was made in 7 days.

I also work as a designer in a design studio so my day here finishes at 7pm. Then I had to run home and start working on this project.

It was forbidden to use photographs of the Poet, because of an image rights problem.

The hardest thing when you make a graphic intervention in a public space is to find a way to "shout out loud without using the voice." Today, the saturation of visual material in the streets has generated in viewers a complete disinterest in what surrounds it. Images have become invisible.

How to achieve to be seen?

With synthesis and poetry.

As with a haiku, with only 3 lines, a complete moment is generated. Here are 8 images to narrate 100 years. Unadorned, using only 3 colours: black, white and yellow; without excesses that do not communicate anything.

Talking about graphic poetry using the least amount of graphics, which therefore, allows anyone that sees the mural to complete shapes and actions in their minds. The work does not give answers, rather, raises questions and encourages the viewer to "complete the poem" or finish the story. Its an open-ended.

When we come across with such diverse personality and creative people, like Parra, people tend to create myths about his life and work, blurring the boundaries between reality and fiction.

Based on this idea of myths, and inspired by Greek mythology, I decided to narrate 100 years of life through small specific acts.

Convey people of the myth of his life, shaped by situations, real or imagined, it is consistent with the work of poetry: fill the world with all that does not exist in. And the myth is the best way to do it. The myth fills the empty spaces in the world.

Every myth has a character, a hero. In this paper, I created this black character, heart faced that “interprets Parra"… but it’s not him. This character is an actor interpreting the poet. The mural is a theatre play, made of graphic facts, played in the street.

When you do something you love for someone you admire its becomes your distraction, not your job.

The mural was featured for two months. Because its exhibition time was so short I created posters of 77cm x 110 cm; one for each piece. This way, the mural is perpetuated by other graphic support linked to public space and art: the poster.

Along with this, the graphics and posters of the mural were used to cover the stand of Chile in Frankfurt Book Fair 2015 and in the catalogue of the same fair.

This work has never been submitted to any contest or competition. This is the first time.

As a graphic thinker, artist and admirer of life and work of Nicanor Parra, I am honoured that the AOI rewarded me with this work.

In addition I want to specially thank my friend Coralie Coralie Bickford-Smith, artist and of cover book designer, who encouraged me to participate and summit my work.

This award is not only an international acknowledgment of my work as an artist and designer, but also a recognition of life and work of the creator of anti-poetry, the great genius, unique, inexplicable (and long-lived) Mr. Nicanor Parra. 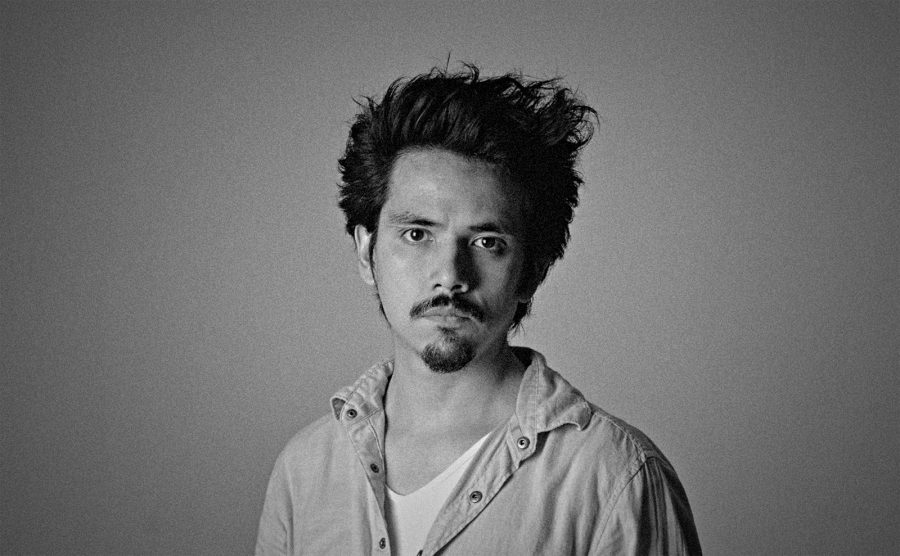 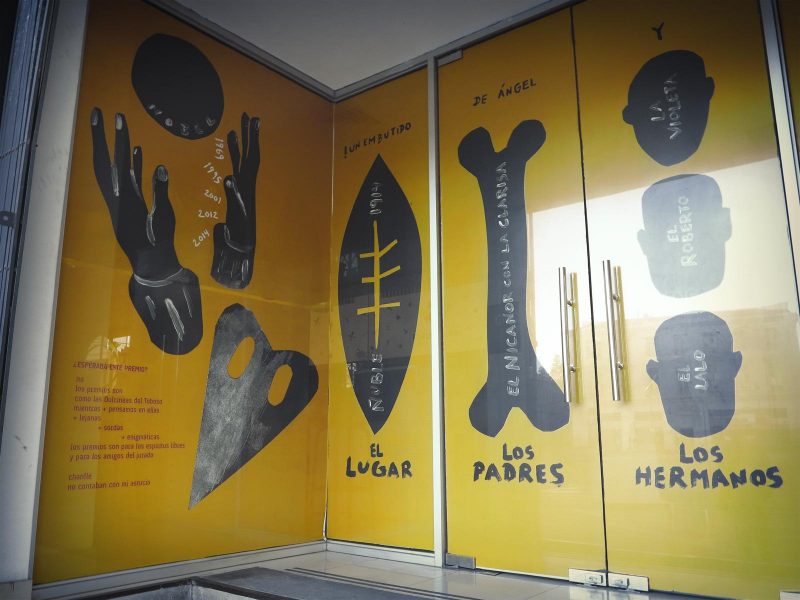 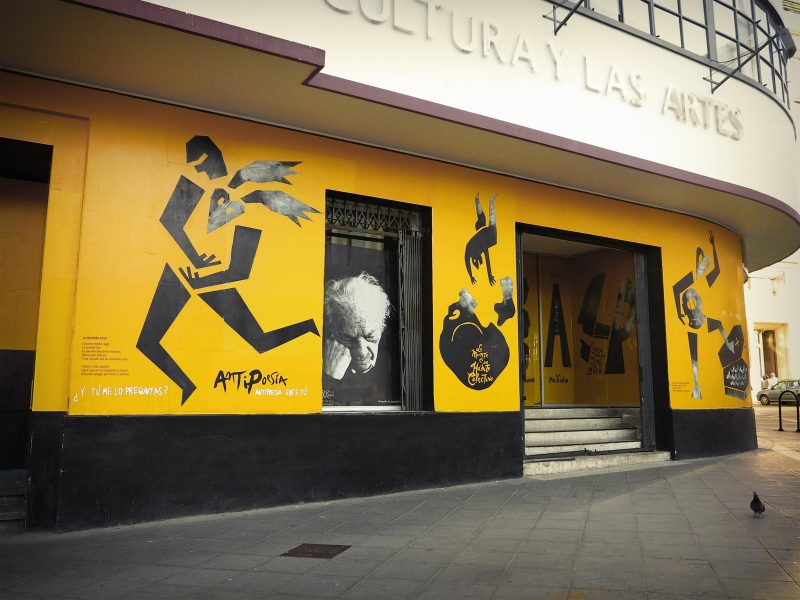 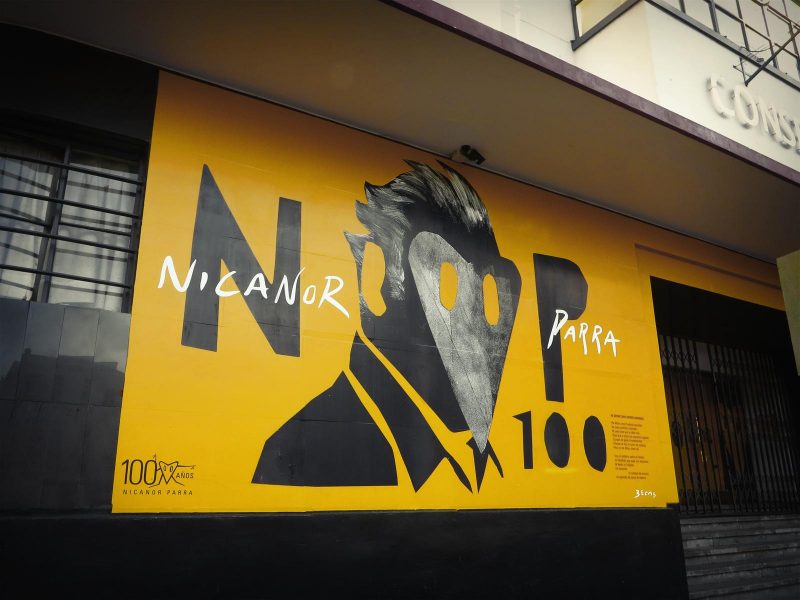 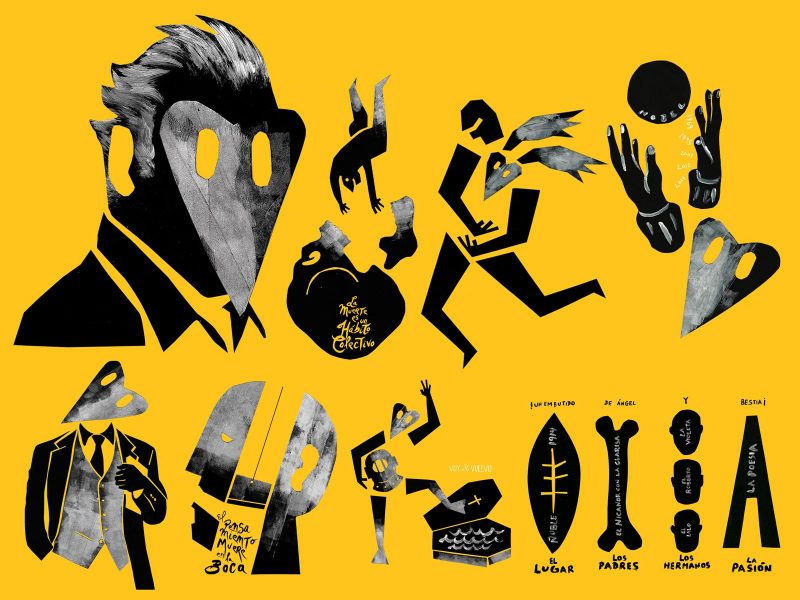 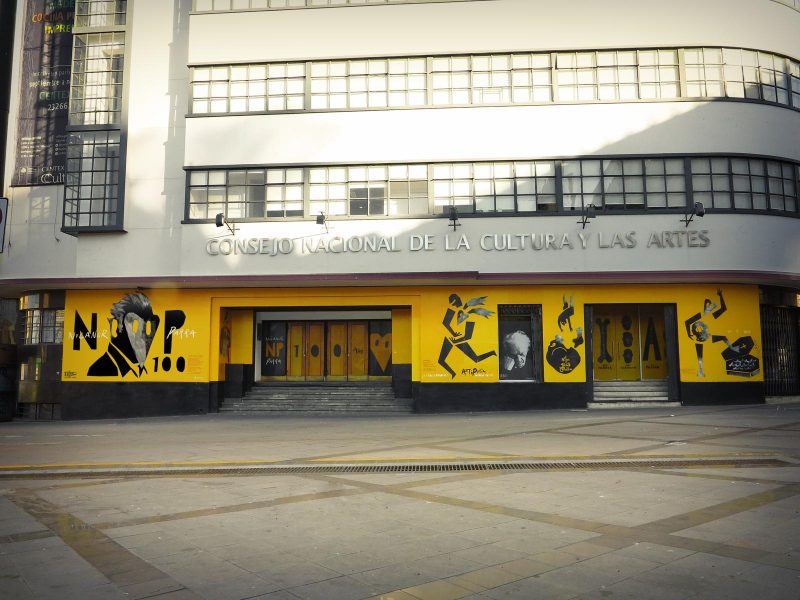