Rebecca is the staff Illustrator/Designer for BuzzFeed International, based at BuzzFeed UK in London. Her editorial cartoons are nationally syndicated in the US by Universal Uclick, and she is a weekly cartoonist for Daily Kos. Her work has received a smattering of awards. Freelance clients include Foyles Bookshop, VICE, Politico, Island Records, WPP, Estee Lauder, Cooperatives UK and more. She has an MA in Communication Design (2014) and a BA in Graphic Design (2010), both from Central Saint Martins.

About Entry
'Eye Spy' depicts the paranoia-inducing ubiquity of surveillance in contemporary society, a reality giving modern existence a sort of dark comical undertone in which no one truly knows who is watched and who is watching anymore, like a scene straight from 'Spy vs. Spy.' The illustration was created for STRIKE! Magazine, an anti-profit, ad-free, independent, lefty bi-monthly publication concerning, as they put it, 'politics, philosophy, art, subversion, and sedition.'

Brief:
The brief was to create a surveillance-themed illustration for the inside cover of STRIKE! Magazine. I had complete creative freedom beyond that, so I decided to make a load of sneaky characters all spying on each other, inspired by cyborgs. One of the scariest things about a surveillance society is the variety of ways in which it can go wrong – be that machine error, human error, or simply human misuse and abuse. I wanted to show all of this overwhelming the page. I kept the colour scheme stark to highlight the feeling of paranoia, and to keep the design from becoming too busy with all of its tiny elements.

Research:
I tend to over-research projects to the point of ridiculousness, spending hours poring over images and articles about whatever subject I'm drawing. I feel that if I don't, I'm somehow letting the subject down, or taking on that over which I have no right to comment. This instance was no different. Fortunately there is no shortage of interesting material concerning surveillance and the watchful gaze of technology, and I'd previously read plenty of Orwell, Huxley and others of the sort out of personal interest.

Process:
After concept research, I gather loads of images relevant to what I'm drawing, to use both as direct and indirect drawing reference. In this case, that meant images of people posing, cameras, phones, CCTV set-ups – and octopi. Then I stuck my headphones in and got to work. Many hours of music, radio, and podcasts later, I had a large selection of individual drawings of 'surveillance creatures,' which I then collaged digitally to create the final piece.

Resistances:
Over-research in the initial stages. I tend to go overboard reading and gathering reference, which delays beginning actually drawing. I think this actually may kind of help in the end, though.

Insight:
I quite like working for STRIKE! as I love the magazine's ethos, and the fact that they give me almost complete creative freedom. This was the first illustration I did for them after they saw my work at my MA degree show. I'm now at work on the third.

Distractions:
Over-research. Having to eat, sleep, and at one point, having to switch countries. Twitter.

Numbers:
32: The number of individual drawings created for piecing together in the final image. (There were a few that didn't make the cut.)

Afterwards:
Unchecked intrusion into our daily lives by governments, commercial entities, and other individuals is an area of both interest and concern to me. It's worrisome how resigned many of us are to these intrusions, if we are even bothered to care in the first place. I was glad to work on this project as such. Through editorial cartooning and other recent/current commissions, I'm also glad to be doing a lot of work in areas of various social injustice. The projects in which I get to point a snarky, inky finger at these quirks (massive euphemism) tend to be among the most fun, and the most challenging – both of which are good things. 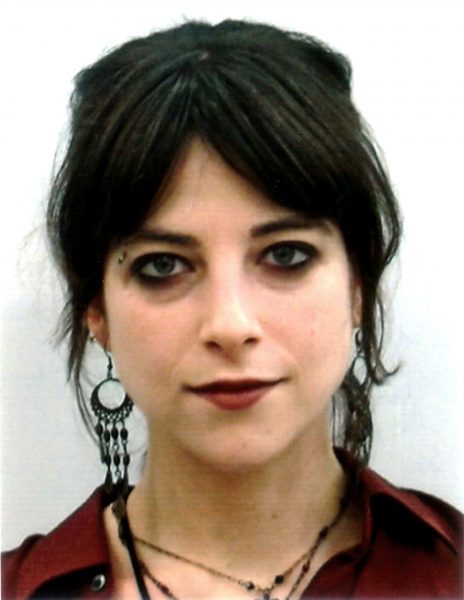 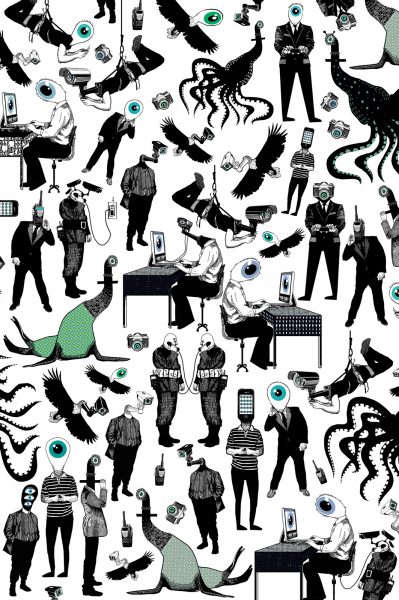