João is a Portuguese illustrator, currently based in London, whose work is split across a variety of practices, from editorial illustration to animation, from comics to children’s theatre plays. He likes the diversity of projects and clients that illustration often involves, which makes it the perfect medium for his endless exploration of the ways drawing can be used as a mean to tell stories.

About Entry
These illustrations are made to accompany a book gathering some Japanese folktales translated to Portuguese for the first time. The tales are selected according to their non-fantastical nature, where no gods, dragons, ghosts or other super-natural creatures play a part. They are stories of ordinary people, traders, samurais and monks, full of adventures, humor and the so-called “oriental wisdom”.

Brief
The publisher passed me the stories and asked whether I’d be interested in illustrating them for a book. It felt like a great challenge and after giving it a read I just couldn’t say no: they were all great stories! He was open to any ideas I might come up with for the illustrations and the book itself, which gave me a lot of freedom to work on it the way I wanted.

Due to the nature of the stories, which are crafted under a fine balance between action and thoughts, a narratively and conceptually approach to the images seemed appropriate. As for the visual style, I was looking for something that could engage with a Japanese visual tradition yet avoiding to replicate a Japanese look.

Research
This book demanded a different kind of research than I usually do, which is very much graphic oriented. This time around, because the stories were set in a different time and culture I didn’t know much about, I searched online and in books for all sorts of images related to Japan in the 13th century, being it contemporary comics, museum photos of costumes and objects, stills of historical films. I was more focused on getting a good idea of how the world of ancient Japan would have looked like in order to feel comfortable with it before I started drawing. I also referred to Yokusai, Hiroshige and Kunioshi for inspiration, whose work I’ve always admired and loved, as well as contemporary Japanese engravers I had discovered in a trip to Japan.

Process
For each new work I normally try to adopt the graphic approach I find more suitable for that particular case. This usually implies some experimentation with materials, styles and composition, before deciding on the final look of illustrations.

This book was no exception, although it took me longer than I expected to internalize its mood and discover a graphic way to translate it into pictures I felt excited and challenged with.

There were a lot of sketches and a lot of thinking on which direction should the illustrations take, until I finally came up with a vision for the book. I decided to leave aside the computer and rely solely on original drawings. I usually use the computer to some extent in my work, but in this case I felt the whole process should be more straightforward, quickly jotting down ideas on small thumbnails and then setting to draw directly with inks on paper, without any underlying sketches. Thus I was trying to capture the energy and spontaneity of sketches, bringing it to the final pieces.

Resistances
Unlike many other books I’ve worked on, this one offered a lot of resistances. It took me longer than I thought to find my own way of drawing samurais and Japanese landscapes, to start a conversation and get it going with such a rich and strong visual culture like the Japanese’s. I kept sketching over and over, changing ideas about the kind of illustrations to do, unable to settle on any direction. I imagined the book taking many different forms, but couldn’t be happy with none. Months were spent like that, on and off the project, with little advances.

Maybe it was all the freedom I’d been given by the publisher to do whatever I wanted or the fact there wasn’t a deadline to it; maybe it was due to the book being set in a historical time, which makes it necessary to convey some sort of accuracy or authenticity to the characters and scenes. It’s hard to say. But the moment I’ve decided to stop caring about all these issues and start afresh was the moment I found the direction I was looking for. Letting go all those constraints, my sketching became immediately a lot looser, free and full of the fluidity I’d been after since I’d taken on the job.

Insight
It’s of a great help to have a vision of how the book will look like in the end. It definitely plays a part when deciding what kind of illustrations to do. I find it very difficult to work if there isn’t such a vision in the first place. It was the case with this book: I had been thinking not to illustrate every story and it was not working. But it all finally came together when I decided to do exactly that!

Distractions
Life in general is the biggest distraction. And then there’s internet and social media.

Numbers
1 book, 20 stories, 21 ilustrations plus the cover, 4-5 months of sketches and 3 weeks to finish all the illustrations. 47 robins drawn in a double spread illustration.

Afterwords
Sometimes, doing something in a previously explored way can be more productive and liberating than aimlessly looking for a new way. 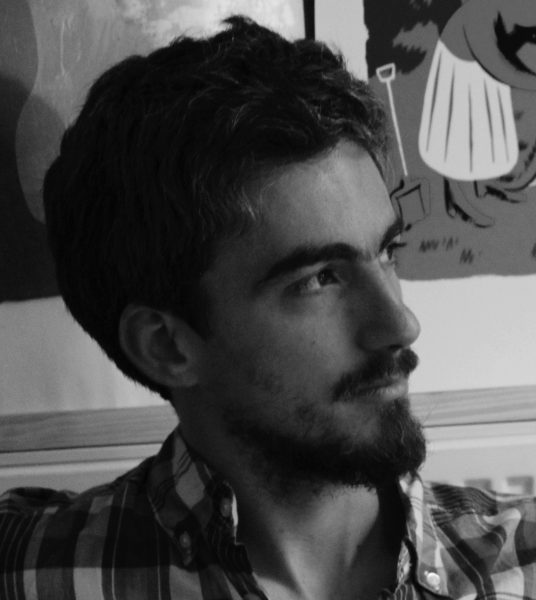 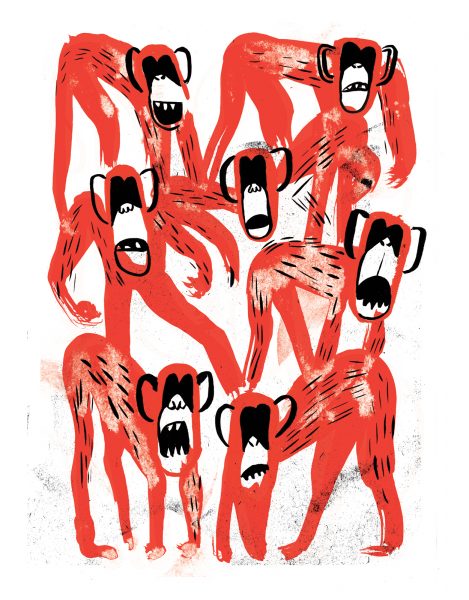 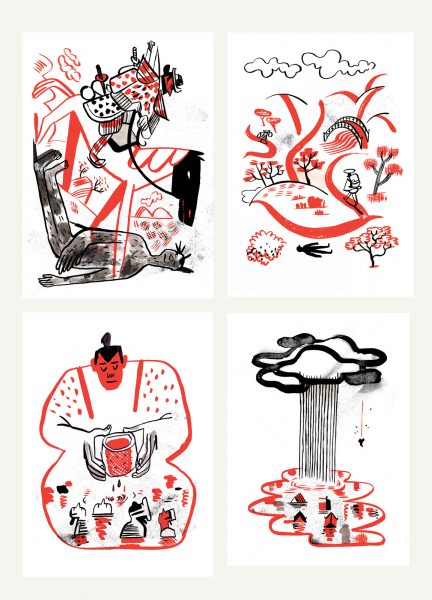