VAROOM 08  the journal of illustration and made images November 2008 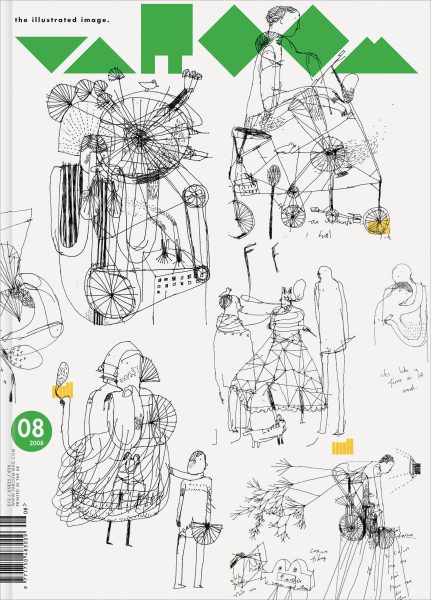 ALAN ALDRIDGE: THE MAN WITH KALEIDOSCOPE EYES BY MIKE DEMPSEY  Alan Aldridge was a key figure in the artistic volcano that erupted in 1960s London. An iconoclastic art director at Penguin, friend of the Beatles, and the author of a string of successful books, Aldridge moved to LA in the 1970s. But he’s back with a new book and exhibition. His one time collaborator Mike Dempsey went to see him.

MAPPING THE TERRAIN MAKING IMAGES MOVE BY MARK WEBSTER  Four artists reveal how new accessible digital tools, and new hybrid working methodologies, have allowed them to take image-making beyond the static and into the realm of motion. In the past they might have been traditional illustrators, but in the new era of computer-aided creativity, anything is possible.

HENNING WAGENBRETH HIDDEN BEHIND THE OBVIOUS BY MICHAEL O’SHAUGHNESSY  Henning Wagenbreth is one of the most influential practitioners and teachers in modern European image making. His work jumps between lino-cut rawness and pixel-perfect, isometric accuracy. But it’s always underpinned by strong narrative undercurrents. He is a skilled and inventive teacher, and has produced a generation in thrall to him.

STEP RIGHT UP! IT’S THE RESIDENTS BY JOHN O’REILLY  The Residents have spent nearly 40 years pushing sound and images into the oddest spaces. But who are they? Everything they do is cloaked in anonymity, and all we have to gauge them by is their music and a body of astonishing visual work that seems to be about the nature of seeing.

THE COMPELLING IMAGE CHOSEN BY STEFAN SAGMEISTER  Illustrators, designers, artists and commentators select an image that has moved them or given them creative stimulus. Graphic designer Stefan Sagmeister’s choice reveals his love of dramatic imagery.

HEATED DEBATE: EDUCATE, AGITATE, ORGANISE BY PAUL BOWMAN  Illustrator and educator Paul Bowman takes an elegant swipe at illustrators, their agents, their educators, and their obsession with style. Yet his irritation is tempered by his knowledge of recent cultural history, and his deeply held view that illustration is too valuable a tool for commentating on the world, to be given up without a fight.

CONTEMPORARY POLISH POSTERS  A WINDOW TO THE WORLD BY CHARLOTTE WEST  The Polish Poster School flourished under the patronage of the Communist state, but fell into decline in the 1990s. Renewed interest from collectors, cultural institutions, and a strong heritage passed from one generation of designers to the next, has helped the Polish poster to make a comeback.

WHAT ARE YOU LIKE?  Self-revealing Artworks by People in the Public Eye Exhibition reviewed by Derek Brazell

Varoom 08 is available from the AOI Shop