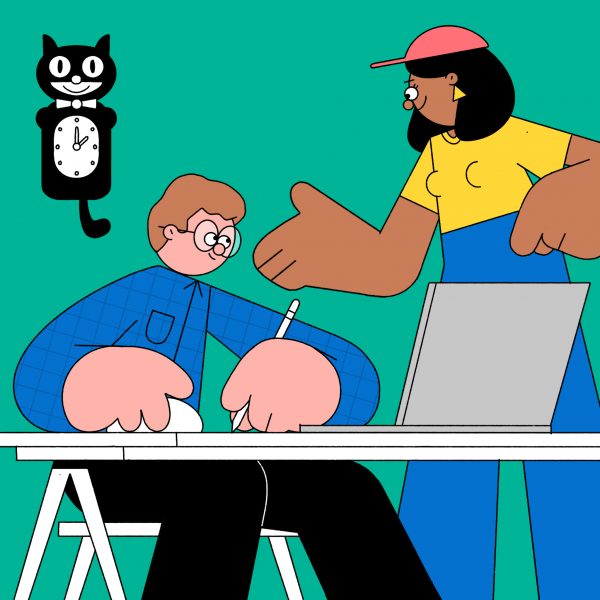 AOI’s 2021 mentorship scheme is open for applications! We are delighted to introduce 15 mentors who are generously sharing their time and expertise with our community.

The scheme is designed to be by illustrators, for illustrators and is coordinated by The AOI. There is no cost. Applications are open to all member illustrators who are under represented in our industry.

This year we are also introducing three agent mentors who are looking to support people under represented in the agenting field, either at the early stage of their agent career, or who are interested in becoming an agent. We know that we need diversity in all areas of our industry and this scheme starts to address this goal.

Mentees will have six sessions (online) with their mentor over a 3-6 month period. In the first session you will agree a basic contract, including when you will meet, what you will achieve, and any challenges that you can identify.

Mentees are asked to set up to three goals to achieve during their mentorship. This might be developing a new technique or skills, getting more confident in negotiation, or working in a new field. They don’t have to be world changing – just game changing for you.

At the end of the sessions you will write a short report for the AOI, summarising your mentorship, and identifying your next steps.

Applicants must be members of the AOI at the time of application. Applications are open to all illustrators and agents underrepresented within this industry.

These should be pdf attachments sent to [email protected]

Applications must be received by midnight Sunday 22 November 2020 (UK time).
Mentorship is expected to start early 2021.

Adriana Bellet is an editorial illustrator based in Stockholm. She draws spirited faces ad colourful spaces from her home studio or from the lounge carpet, with her two little boys. She is self-taught and loves books, coffee and a blank sketchbook will all but promise.

Camille has been practising illustration professionally since 2014. During that time, she has worked both with and without an agent, in various industries including educational publishing, museums, and corporate, and had the privilege to work with a variety of clients including the BBC, Scholastic and English Heritage.

Although she would say that she is still learning and growing as she goes, she feels that she may be of some help in the areas of business & strategy, self-promotion (especially through Instagram), and mindset, especially those who are self-taught as she is self-taught myself.

Caroline joined Arena Illustration Agency in 2001 and is a pivotal member of the team, becoming Co-Director in 2006. With a MA in Sequential Illustration from the University of Brighton and a BA from Norwich School of Arts, she spent over ten years working as a freelance illustrator providing illustrations for a variety of clients in book and magazine publishing, advertising and design. Caroline is passionate about re-investing her wealth of knowledge by providing best practice advice, lectures and portfolio surgeries to Illustration graduates.

Cat O’Neil is an illustrator based in Edinburgh. Cat graduated from ECA in 2011, and has since lived and worked as an illustrator in Hong Kong, London and France. Clients include The New York Times, The LA Times, Variety, WIRED, The Financial Times, The Economist, Scientific American, Libération, Revue XXI, Time Out HK and more. Awards include Communication Arts Award (2019), the V&A Illustration Awards (2018), and Cheltenham Illustration Awards (2013), along with being shortlisted and receiving recognition from the Association Of Illustrators, Society Of Illustrators and 3×3 Magazine of Contemporary Illustration.

Cat mainly specialises in editorial illustration but has also worked on solo exhibitions of personal work, and a short graphic novel, Returning Home which was funded by Arts Council England.

Dan Woodger is a London based illustrator and animator with 8 years experience working in the creative industry. Since graduating from the University of Brighton in 2011, Dan has been busy creating a unique, playful, character based style of work, that has seen him collaborate with some of world biggest brands, including Apple, Google, The New Yorker, Netflix, Samsung & Pepsi.

Dave Bain is a Falmouth graduate and now Bristol-based illustrator who loves inventing visual solutions. Professional highlights include transforming a 200m stretch of a children’s hospital corridor into a playful journey, live drawing for a Nokia ad campaign and illustrating the first NSPCC mail-out booklet.

Jacqueline graduated with a degree in Graphic Design from Chelsea in 2008 and went on to work in the High street as a graphics and pattern designer for six years for clients including H&M and Oasis. A career move into freelance illustration six years ago has seen her creating explorable and playful illustration work across, product, packaging and editorial. She loves to work with typography and often explores themes around travel and curiosity! Clients include; Ohh Deer, Twitter UK, Derwent, Mollie Makes, Kate Spade, FLOW magazine, Great Ormond St Hospital and Refinery29

James Albon is a British author and illustrator. His clients include the Folio Society, the Wall Street Journal, the Guardian, Libération, Penguin Random House and WIRED, and he is the author of two graphic novels: Her Bark & Her Bite (2016) and A Shining Beacon (2018). He studied illustration at Edinburgh College of Art, and went on to a postgraduate scholarship at the Royal Drawing School in London.

He was awarded the Gwen May Award from the Royal Society of Painter-Printmakers in 2012, a finalist in the Observer/Cape/Comica Graphic Short Story Prize in 2018, and has been a Laureate of the Rene Carcan Biennale in 2014 and 2020.

Jenni Sparks is an illustrator, designer, map maker, and typography designer. Originally from Somerset, England, she is based in East London where she has her studio. After creating her first illustrated map of London in 2012, she went on to create illustrations of New York, Paris, Berlin and San Francisco. Her detailed, informative and often humorous maps have been featured in international newspapers and publications and exhibited and sold as prints in several art galleries around the world. The London map has been used as part of tourist campaigns for the city, and even enlarged to cover the floor of London Gatwick Airport as a huge public artwork.

Since then she has continued to illustrate and has worked with clients such as Nike, Adidas, Carnaby St, BHV Paris, Grazia, Variety Magazine, Absolut, Lonely Planet, Cosmopolitan Magazine, Harper Collins and Sesame Street.

Laura Hughes is an award-winning children’s illustrator. She has created artwork for over 20 picture books including Daddy’s Sandwich by Pip Jones and Hop Little Bunnies by Martha Mumford.

In 2018, Laura won the Oscar’s Book Prize, with author John Dougherty, for their book There’s a Pig Up My Nose. Laura has also been nominated for the Kate Greenaway medal twice and has received the runner-up prize in the Sainsbury’s Book awards.Laura’s artwork has featured on packaging, stationery, homewares and greetings cards in countries all over the world.

Her clients include Anthropologie, Faber&Faber, HarperCollins US, Bloomsbury, Waitrose and American Greetings.

An illustrator and graphic artist living and working in Glasgow, my work is based on a minimal approach with a focus on light and shadow. A former Studio and Creative Services Director in agencies across the UK, Australia and New Zealand, Marcus has been working full time as an illustrator for 6 years.

Matthew Shearer is an Agent at Bernstein & Andriulli, looking after a roster of around 50 Illustrators, Animators, CGI Artists and Muralists from all over the world.

Since graduating from Cardiff School of Art & Design with a Degree in Printmaking, Matthew has spent his career in Artist Service, starting in Marketing at London Print Studio before working for years as the Membership Manager of the AOI. During this time he was able to advise Members on every possible type of commission, contract and situation, experience that was crucial to his next role as an Agent.

As an Agent, Matthew sources projects for his Roster from Clients all across the UK and EU, maintains those Client relationships and oversees the projects from commission to delivery.

Owen Davey is an award-winning Illustrator from the UK. He has worked with clients including Google, Facebook, Sony, Lego and National Geographic. He is the lead illustrator on the multi-award winning app Two Dots and has produced many picture books over the years, most notably the non-fiction ‘About’ series with Flying Eye Books, which began with ‘Mad About Monkeys’ in 2015. These books have been published in every continent except Antartica. He won Best of Show and two Silver Awards in the 3×3 Professional Show 2019.

Ryan is the Senior Illustration Agent at JSR Agency; he looks after and manages the global roster of 22 of the finest illustrators working right now. Besides a very short (and soul destroying) stint in recruitment, he has only ever worked as an Illustration Agent. It’s what he knows best and can’t see himself doing anything else – a lifelong passion for drawing and two degrees in the subject come in very handy, too!

A big part of what he finds most rewarding about his job is finding and helping artists to develop their careers and witnessing their trajectories. Seeing them getting their deserved recognition is an amazing.

Alongside his role at JSR he has had the honour of being on the D&AD New Blood judging panel in 2020, and the Creative Pool Awards in 2018.

He lives in Nunhead with his wife and two cats, Luke and Small Cat (yes, that’s really her name) and he likes a jazzy sock.

Willa Gebbie is a Scottish watercolour illustrator based in London. Over her ten year freelance career, she has predominantly worked within luxury fashion, lifestyle and beautys; creating artwork for global brands including; Chanel, Cartier, Kate Spade and L’Occitane. Her highly crafted illustrations combine traditional watercolour with contemporary digital elements.

Our 2020 mentorship scheme is now drawing to a close. You can read about the successful mentees here.