The World Illustration Awards 2020 Longlist features over a hundred projects by New Talent illustrators from all over the world.

We’ve rounded up some fantastic New Talent entries by either current students or recent graduates for you to discover, and see the next generation of illustrators who are pushing our industry forward. 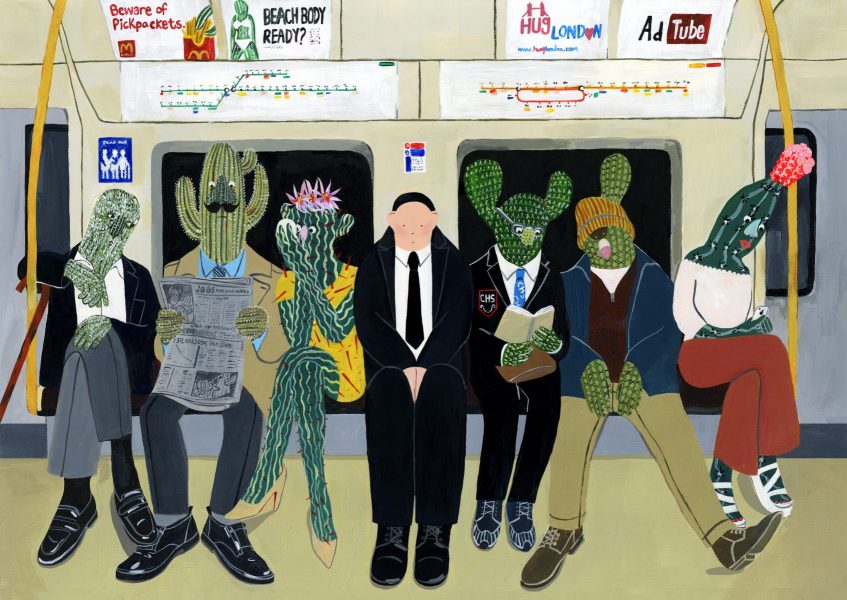 Korean-born Guhee Kim is a visual communicator who works under the name of Da. Kim in London, UK. A graudate from London College of Fashion, Kim is now pursuing the Master Degree in Visual Arts: Illustration at Camberwell College of Arts, University of the Arts London. The initial inspiration for this personal project titled Mr Anxiety and his Thorny Nightmare, came from the artist’s own experiences with social anxiety. Made using acrylic paint on canvas paper to depict a dream-like atmosphere, which is highlighted by the muted colour palette. 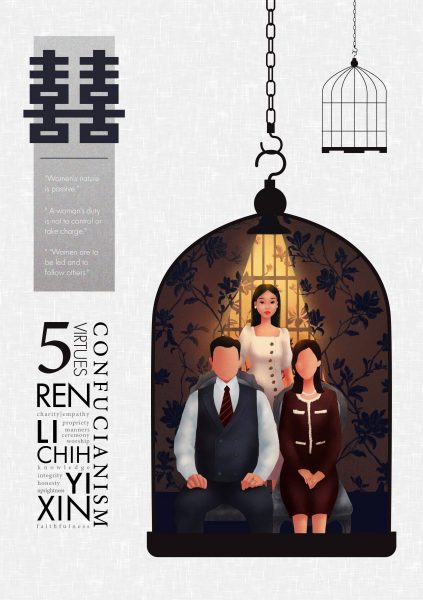 Esther Choi is an illustrator finishing up her last semester at Laguna College of Art & Design. This project represents some of the struggles an Asian American woman might face, such as beauty and behavioural standards. The piece is made digitally using Procreate and Illustrator. 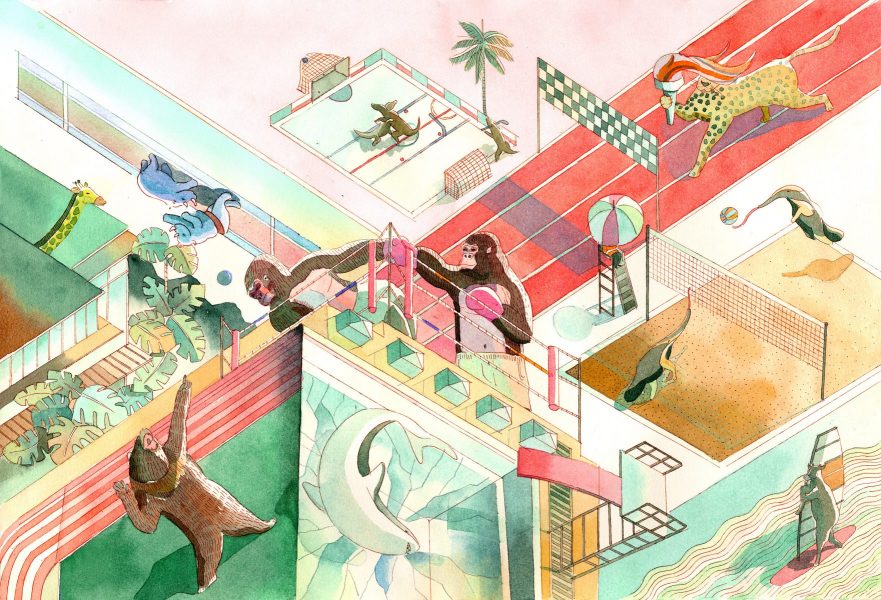 Flyingpig, is a post-90s illustrator who was born and raised in Hong Kong, and now studying at the Royal College of Art, Visual communication. This illustration was commissioned by The AWW, an illustration community and magazine about animals. The illustration is about animals preparing themselves for the Olympic Games 2020. 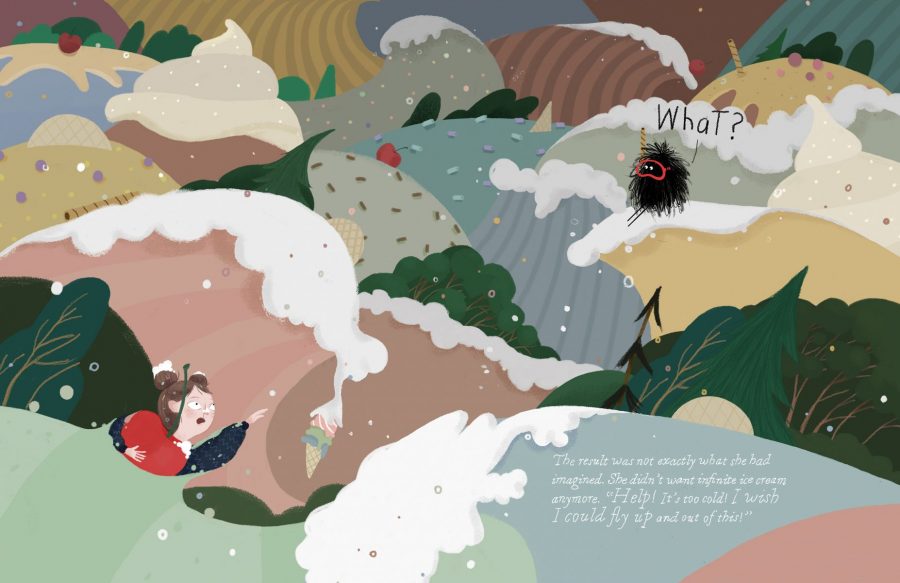 This is Fruzsina’s first first children’s picture book and based on a tale from a forgotten traditional European legend about a genie character which constantly asks “What?”. The illustrations began as pencil sketches, and finished digitally. Originally from Budapest, Fruzsina graduated in 2019 from Glasgow School of Art with an M.Des Illustration. 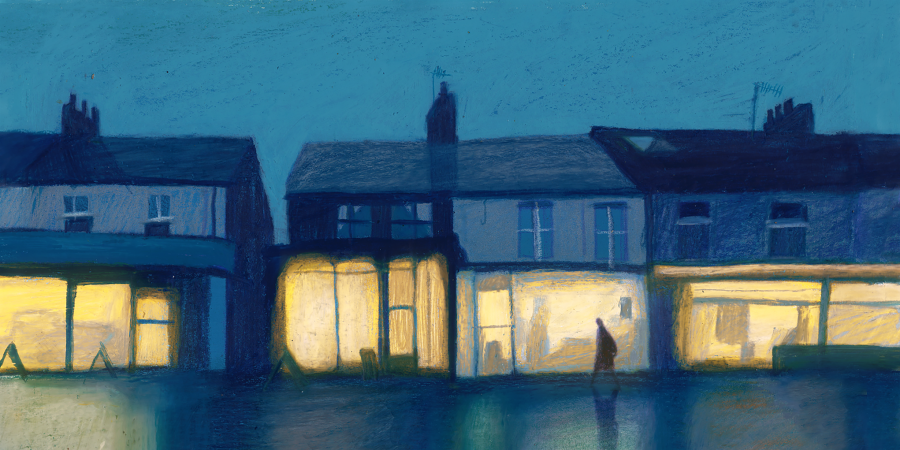 Jodie is currently based in Cambridge, studying in her final year of Illustration at Cambridge School of Art. This project investigates figures and light sources at night, and the city as a ‘habitat’ where these two qualities are often found together. The illustrations were made using a mix of gouache and coloured pencil, drawn from my location studies and photographs taken throughout the city of Cambridge at dusk. Colours and tones were then digitally adjusted to match the designs from my sketchbook, as well as the assembling of the layouts.

Jimin Park : Where Are The Sounds? 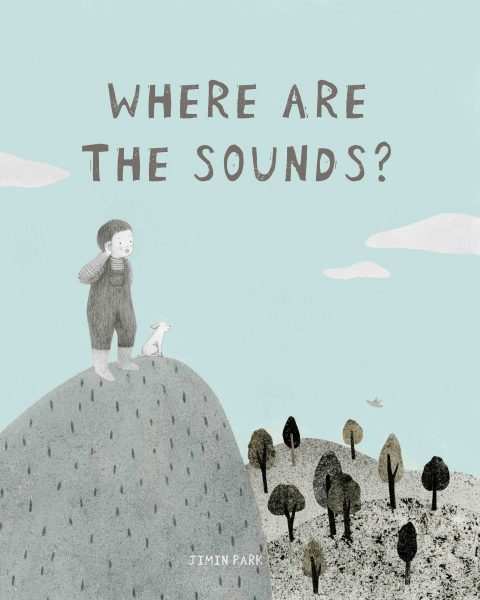 Jimin’s project is a picture book based on her father’s experiences of being deaf, and communicating using lip-reading. The work is made using pencil, stencils and collage. Jimin Park is an illustrator based in South Korea. She graduated with distinction from the MA Illustration course at Camberwell College of Arts. Her final project was selected the graduate art prize of Artiq in London and the unpublished picturebook showcase in Frankfurt book fair 2019. 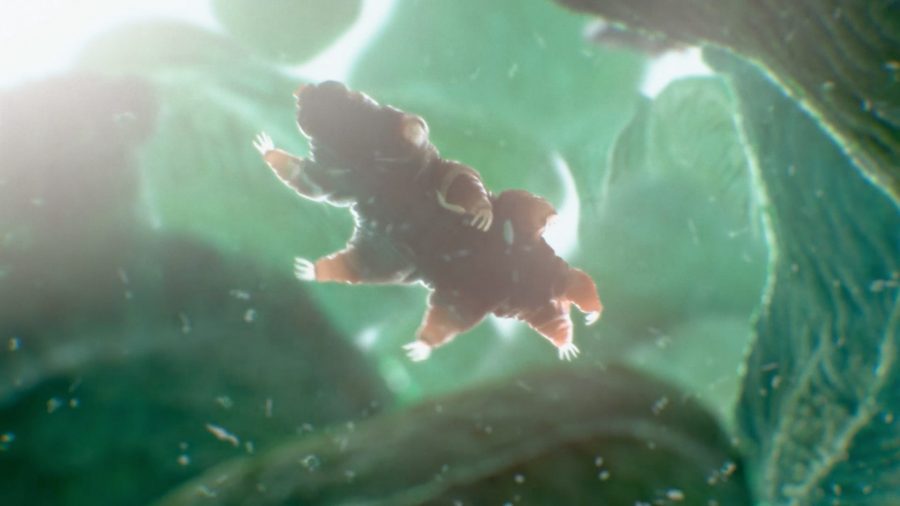 Paul Veach’s illustration was created to elucidate the robust survival mechanisms of one of the most fascinating microscopic animals alive, the tardigrade. They are able to survive complete water loss, a feat virtually no other animal can match. As the tardigrade’s environment dries, the viewer is taken inside one of its cells, where visually striking, desiccation – defying processes play out. Paul is a biomedical artist and animator currently completing his Masters of Science degree at the University of Illinois in Chicago, USA. 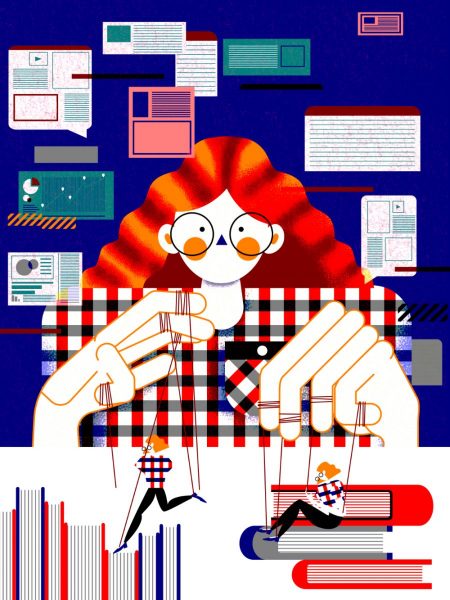 This illustration shows how people in modern society have been drawn by an invisible line, responding to the expectations from others. It’s made digitally as a portfolio piece by Zhang Yu, an illustrator currently based in China. 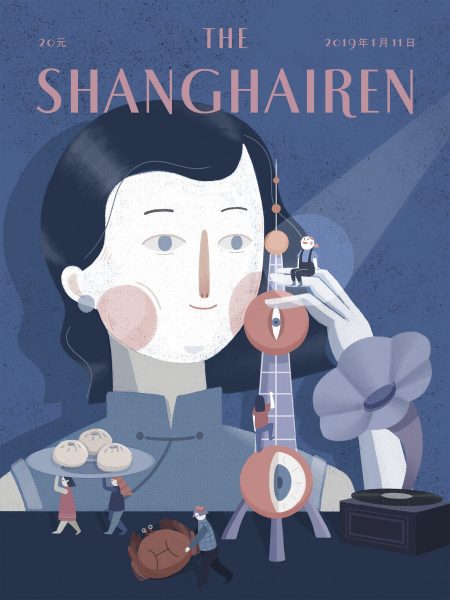 Zoe is a first-year illustration graduate student from Syracuse University originally from Shanghai, China. This work showcases a creative vision of Shanghai for a book cover design, made as a digital illustration. 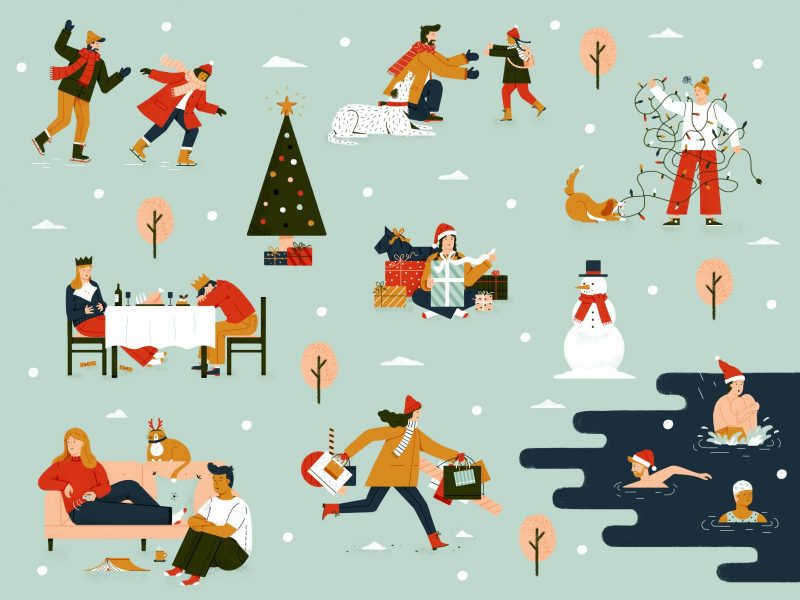 This work by Alana Keenan was commissioned by Bean and Goose, a luxury chocolate brand from Ireland, to create eight different typical Irish Christmas scenes to be used on limited edition packaging, point of sale display and for a seasonal marketing campaign. Alana currently lives in Stuttgart, Germany were she studies Communication Design in her final year at the State Academy of Fine Arts Stuttgart 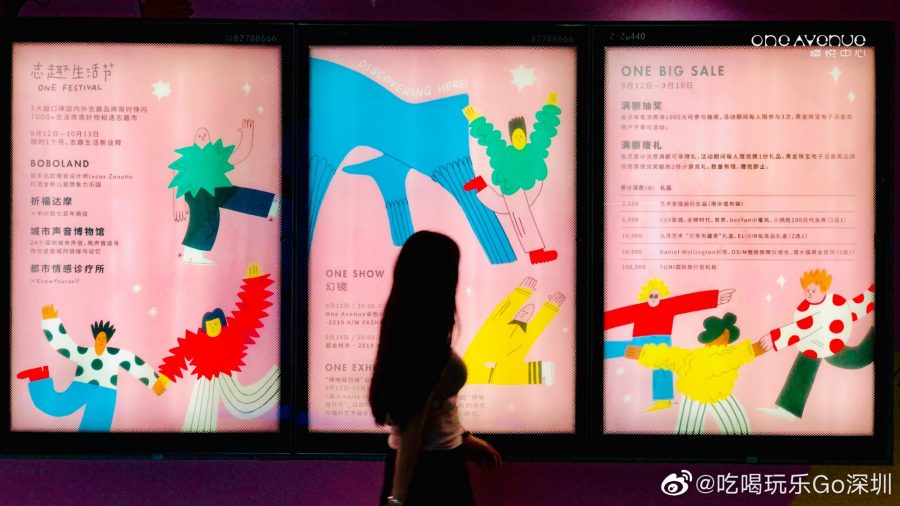 This commission was for a fun and playful image to inspire people to “discover here” at One Avenue Shopping Centre in Shenzhen, China, whilst also thinking about how it could be used in many ways, on different objects, in a variety of settings and on posters. Tess is a recent graduate from Kingston School of Art and currently lives and works in London, UK. 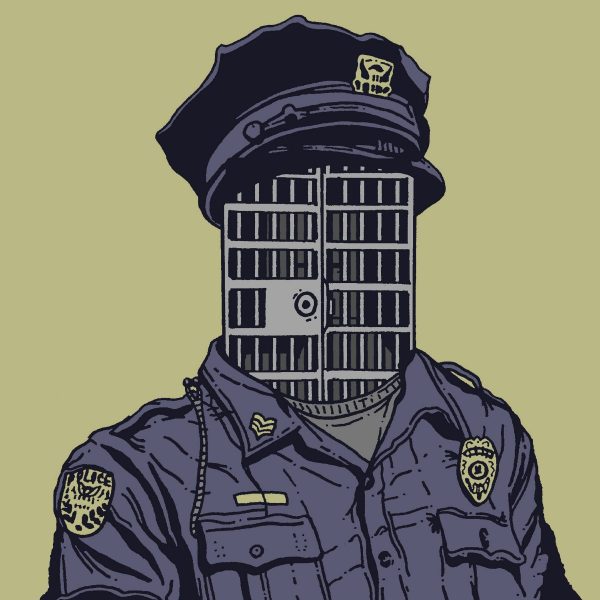 This work was created in response to an assignment given in an Op-Ed class. The article given was about how the police misuse power and how that may be why US prisons are filled at a ridiculous rate. The illustration is intended to be used alongside an article. It was made with felt tip pen, then scanned and coloured digitally. Spencer Martin was born and raised in Miami, Florida. He studied at New World School of the Arts and received a scholarship to attend Artcenter College of Design. 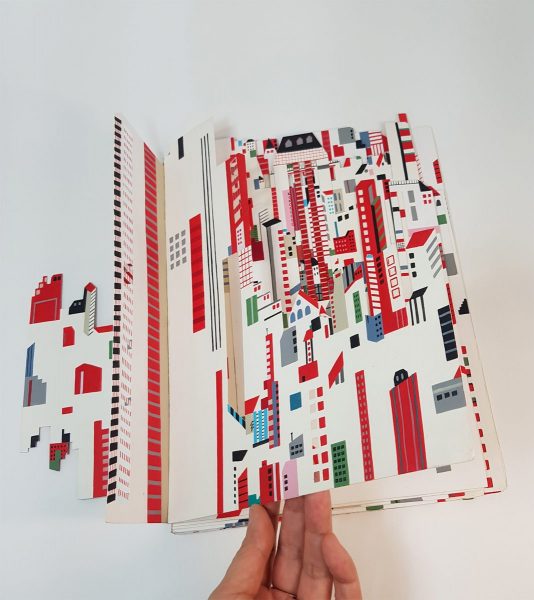 This artist book shows how a geometric beauty exists everywhere in the city. It is made using acrylic paint on paper, and cut by hand.

If you enjoyed this article, why not have a look at the full WIA2020 longlist, for more inspiration!