Yehrin Tong created the dramatic, flowing artwork for the cover of the Fantasy issue of Varoom in four varied colourways. We asked her about her concept and process.

Could you talk us through the concept for your Varoom cover?  How does it express the theme of Fantasy?

Choosing the Phoenix as a subject for the Fantasy issue came from a personal place as it’s the name my partner and I gave our son. The Phoenix being a symbol used universally for regeneration, renewal and hope, we felt that this beautiful otherworldly firebird best represented our hopes and dreams for him. It’s message translates across cultural barriers, multiple faiths, and has inspired the imagination and fantasy of writers and musicians for centuries. Being born into a time when the world isn’t making a lot of sense, we wanted to give him a name that transcended reality.

What was your working process?  Do you draw by hand initially or work digitally straight away, or perhaps a combination?

Most of the sketch phase was drawn on the iPad using an ipencil. As I was working on a repeat pattern, I needed to be able to duplicate, flip and use layers from an early stage to get a good idea of the overall picture. It gave me the freedom to work where I wanted without weighing me down and gave me the information I needed to hone it down on my desktop later. I worked mainly in Illustrator after the sketch phase to get crisp lines and flexibility with sizing.

How do you feel about the final artworks?

I love the end result. It resembles tie dye and looks quite different to my usual style, maybe because the subject was rooted in something personal. I originally intended for this piece to look quite anarchic, on a black background with fierce red flames setting the masthead alight. But I started softening the piece half way, rounding off spikier edges with fluid lines and introducing lighter, brighter colours. I wanted the overall effect to radiate colour and positivity and for the four different colour ways to reflect the multicultural nature of the Phoenix. 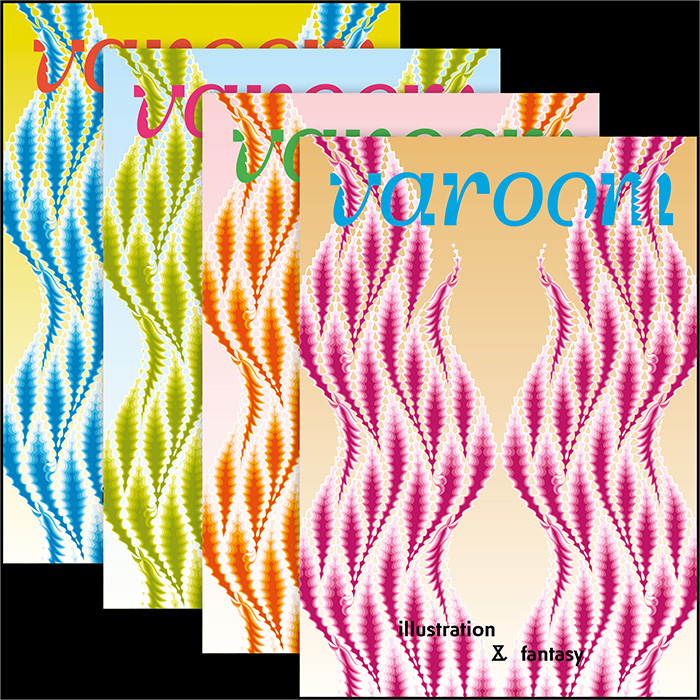 I was working on two different versions of the cover, one filling the entire page with flames and another version with negative space. I found it difficult to choose from them so I was delighted to hear that the full page pattern was to be used as endpapers alongside the cover.

It was a fantasy in itself to have been asked to work on this cover. When I started illustration, I dreamed about having my work on the cover of this magazine. So this is very much a fantasy come true.