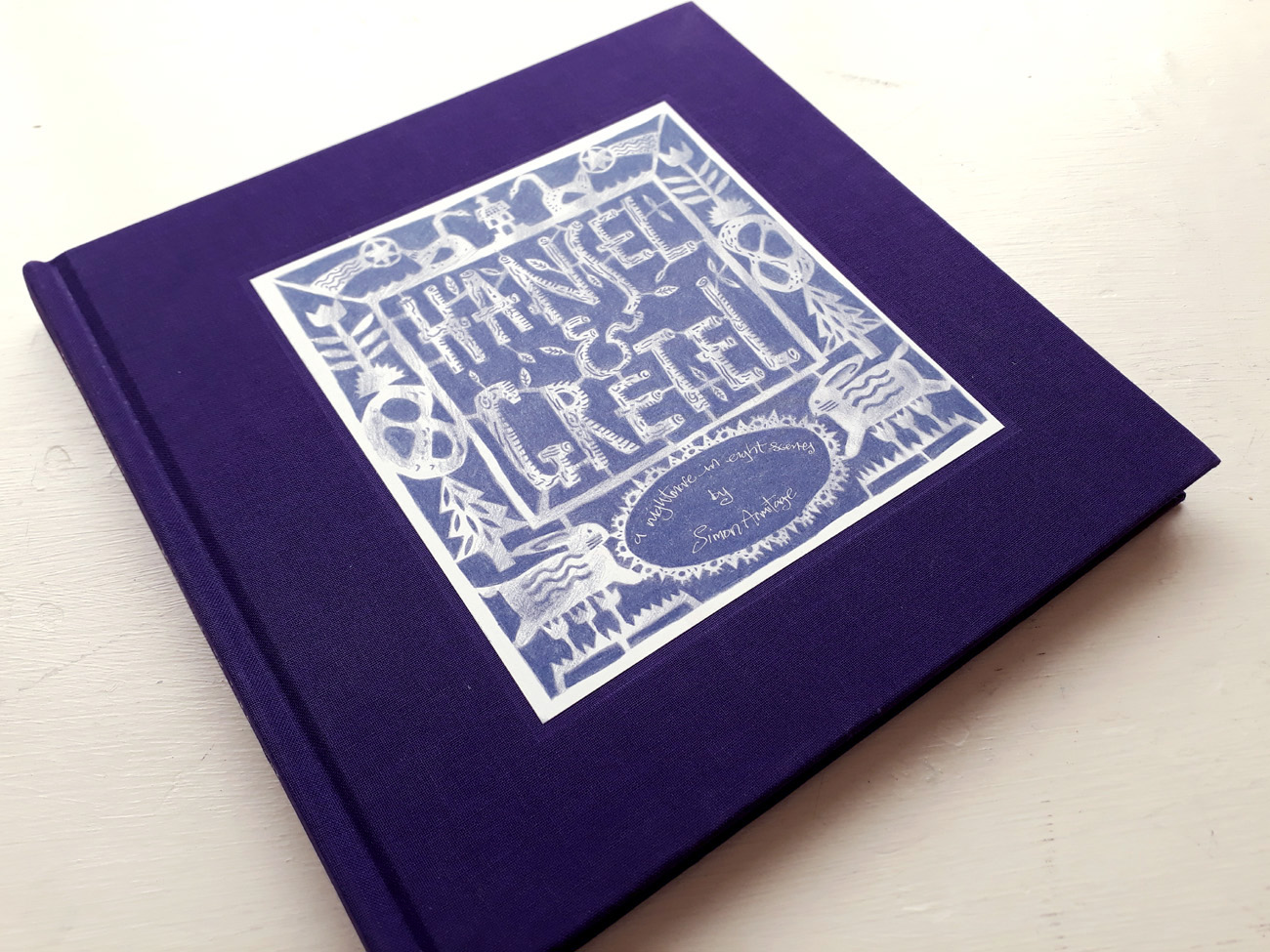 Opening on dark endpapers with bombs dropping through sharply shaped trees, you are definitely given the impression that this version of Hansel & Gretel by Poet Laureate Simon Armitage and artist Clive Hicks-Jenkins is probably going to live up to its sub-title – A Nightmare in Eight Scenes. 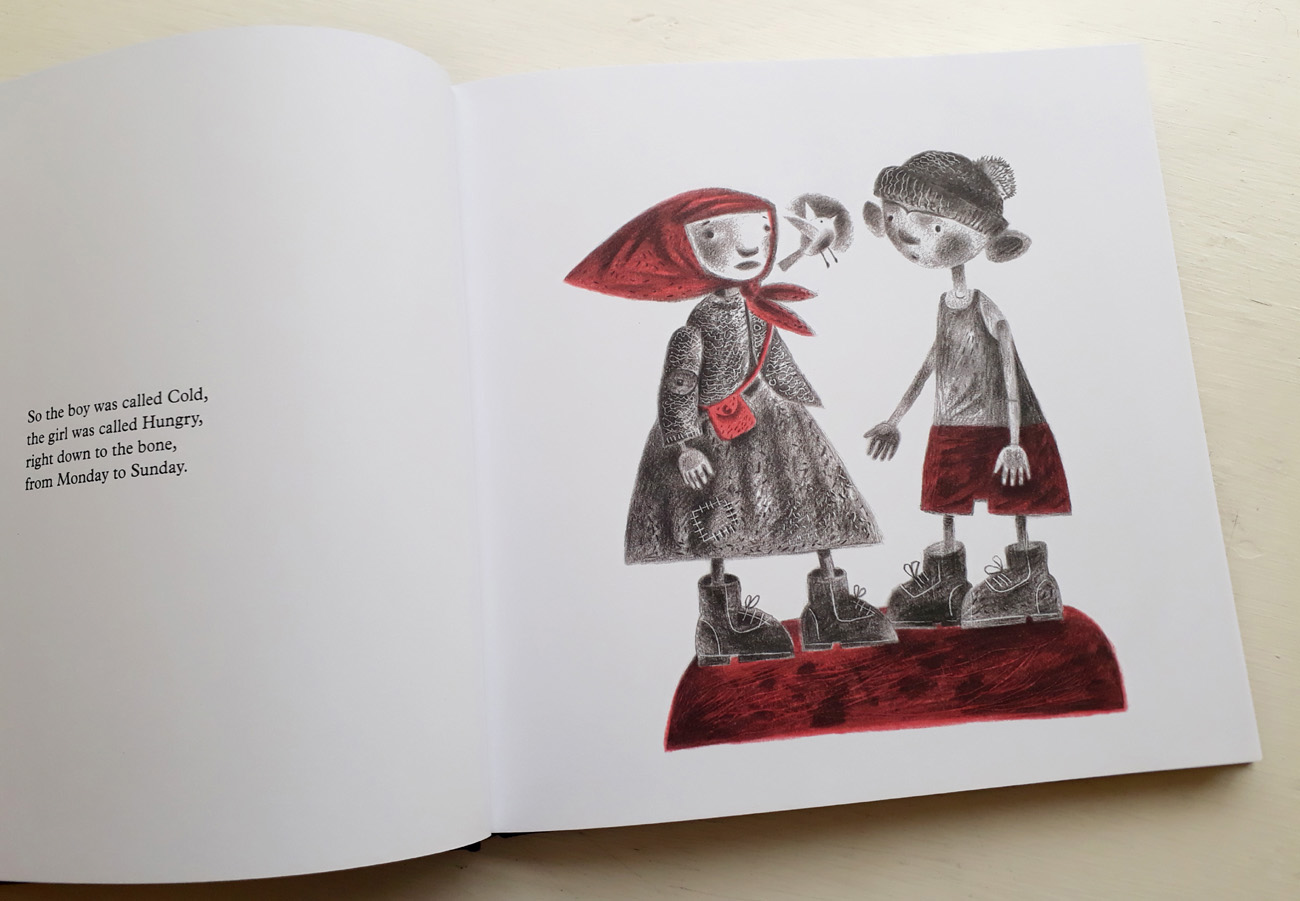 This Hansel and Gretel live in a ruined, fought over village with stricken parents who are unable to feed them. Although the mother is a bread-maker, there’s no yeast or flour, ‘the shelves are bare and the shutters are down’. Armitage’s sharp, self-aware, poetry strips the action down, evoking much in few words.

So the boy was called Cold,

The girl was called Hungry,

Right down to the bone,

From Monday to Sunday. 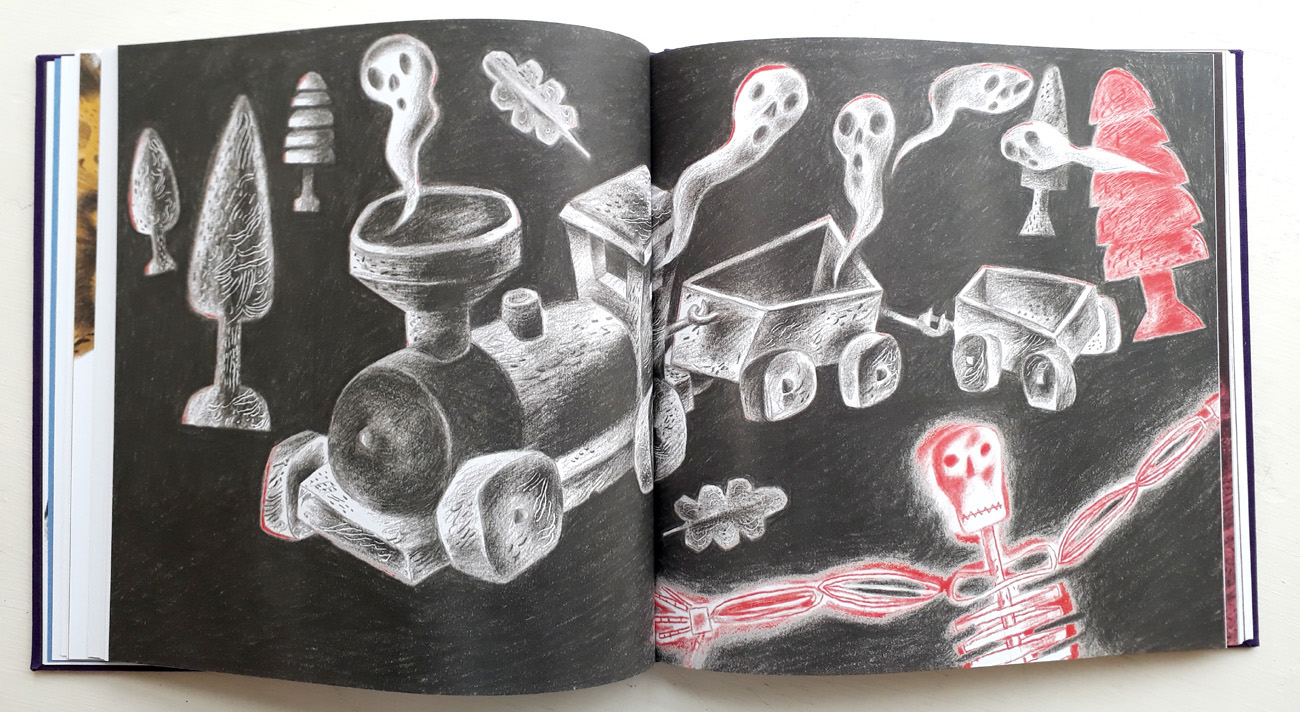 Hicks-Jenkins images follow suit, with muted expressions leaving emotion to be discerned by the reader, as the seemingly passive looking characters are presented for the story ahead. Many of us will know the arc of this story, but as the father and mother sadly lead the two children away from home – ‘We need to hide them where bombs can’t find them’ – convinced the duo can fend for themselves, the contemporary interpretation of families separated and destroyed through the actions of war and the seeking of refuge bring the age-old tale into the present day. As for the witch, who would deny there are dark forces out in the world today? 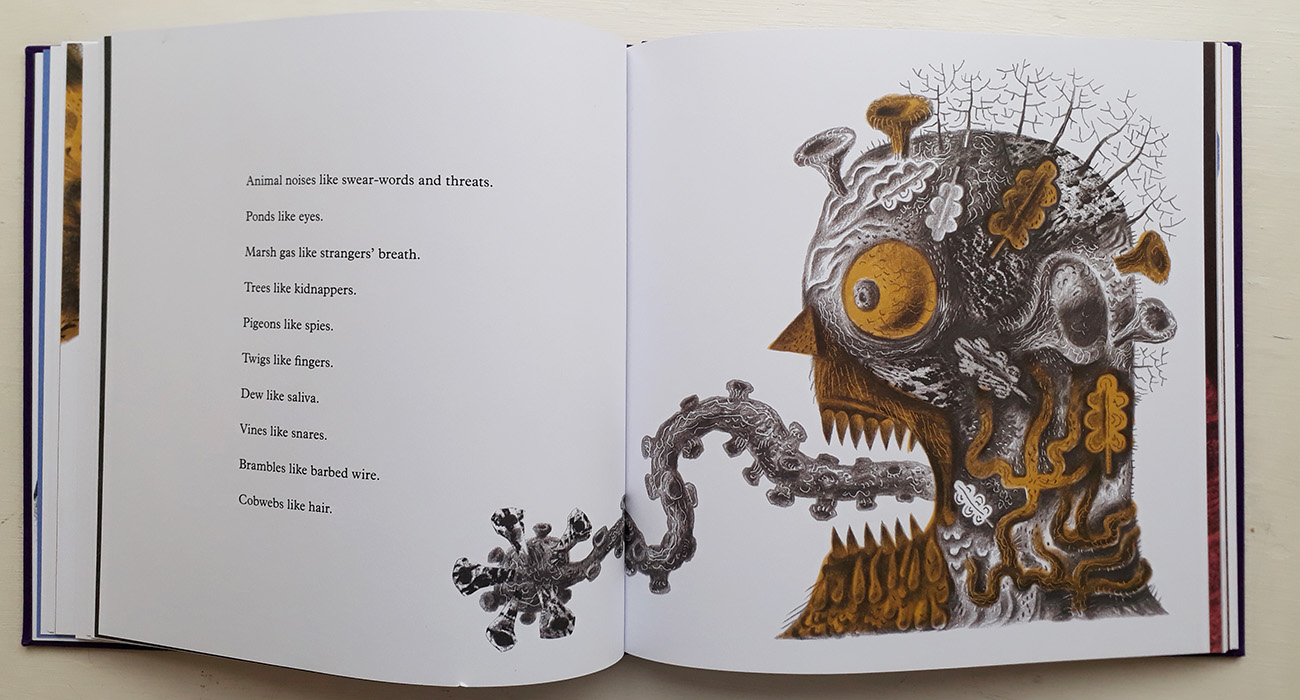 For the illustrations, Hicks-Jenkins takes many of Armitage’s metaphors literally, depicting the ‘ghost train’ that the dark forest the children are left in transforms into at night as a toy choo-choo transporting spooks. But on the following spread pulls out a scary head to expand on the fears present in the blackened wood, ‘Ponds like eyes / Marsh gas like strangers’ breath / Trees like kidnappers’. 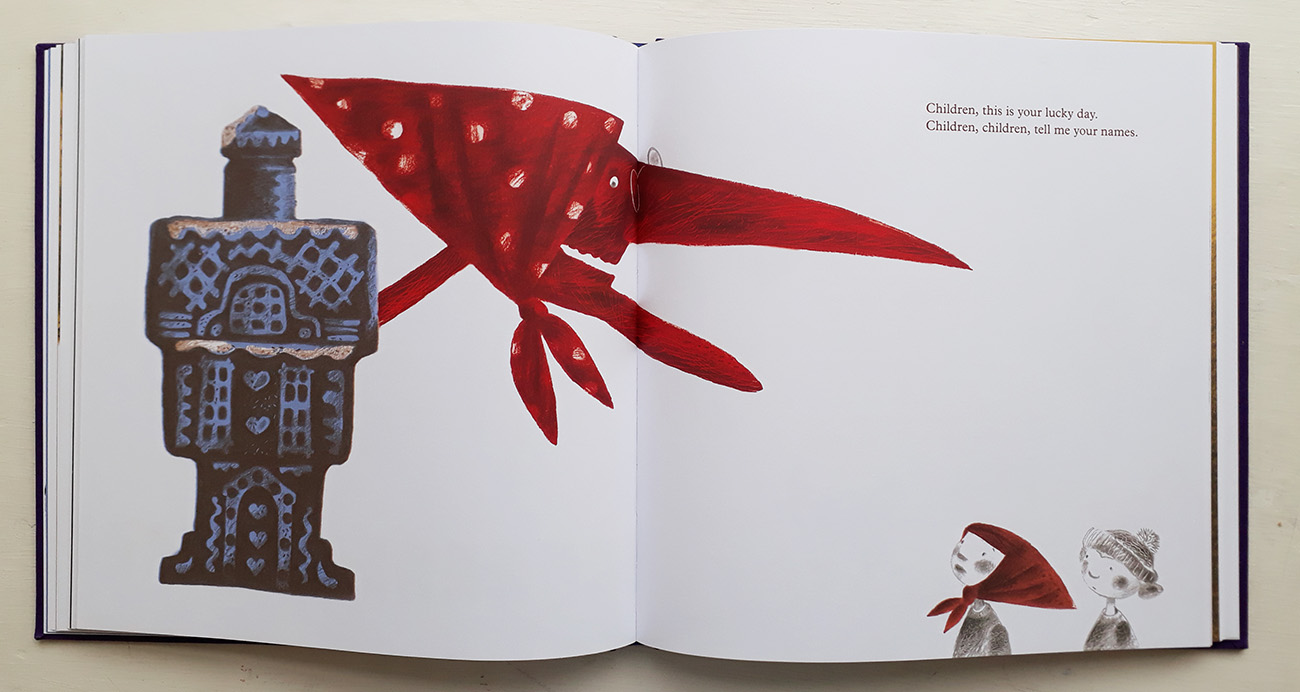 Many of the illustrations’ characters take their cue from vintage toys (and sweets), and have an initial cuteness, but the visual cue of past-times is undercut by the threat of looming circumstances. Hick-Jenkins rejects a nostalgia ingterpretation, telling Varoom magazine, ‘My explorations are all about objects being repositories of histories. They’re like radio dials, and if you twiddle them you ‘hear’ the past.’ 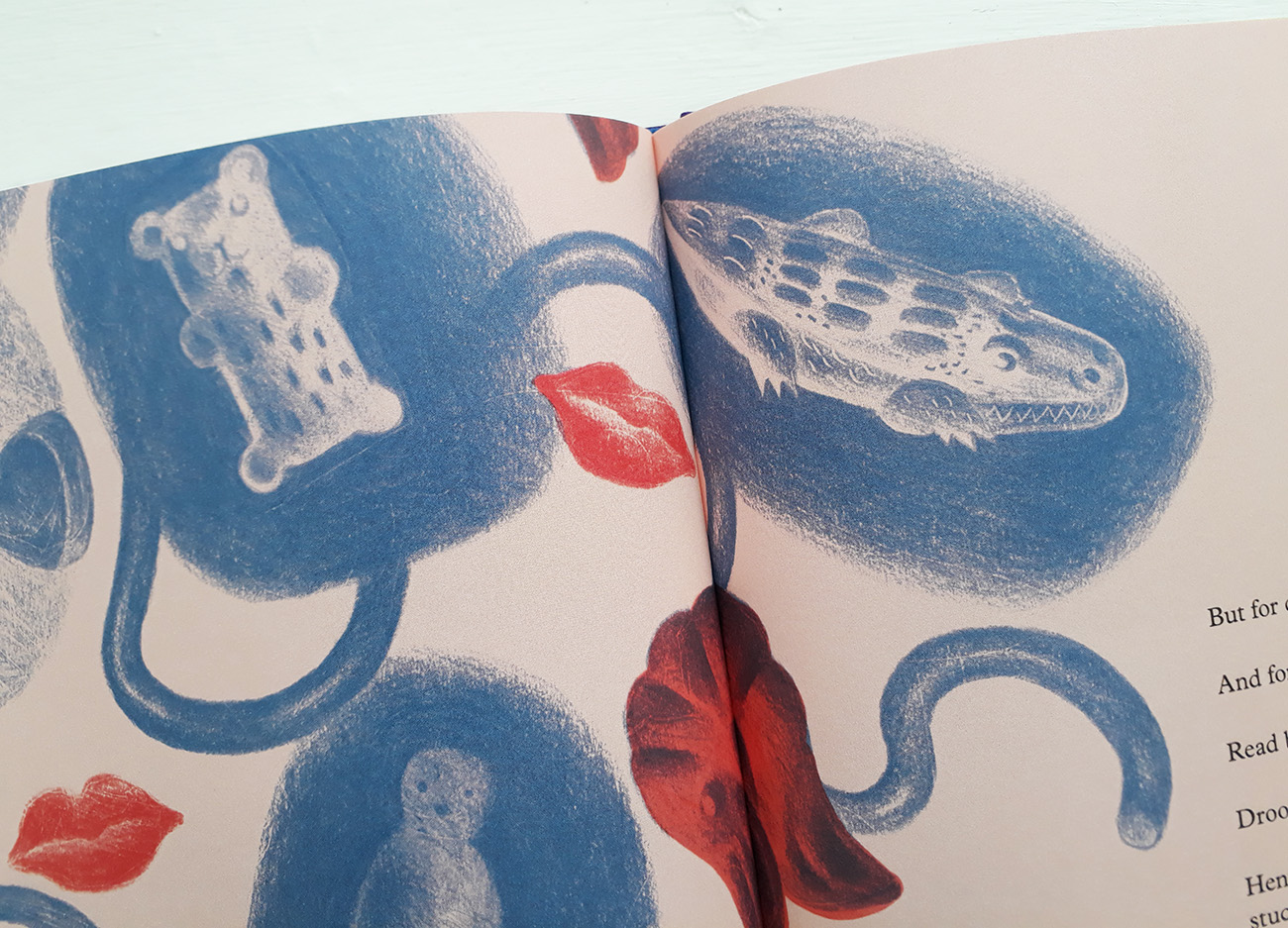 The scent of sugar from an abundant trail of sweets leads the children to the witch, who has the sharpness of scissors, but is almost blind wearing ‘Glasses like core samples of ancient Arctic ice’. She can’t see if Hansel is being successfully fattened up by her efforts or not. 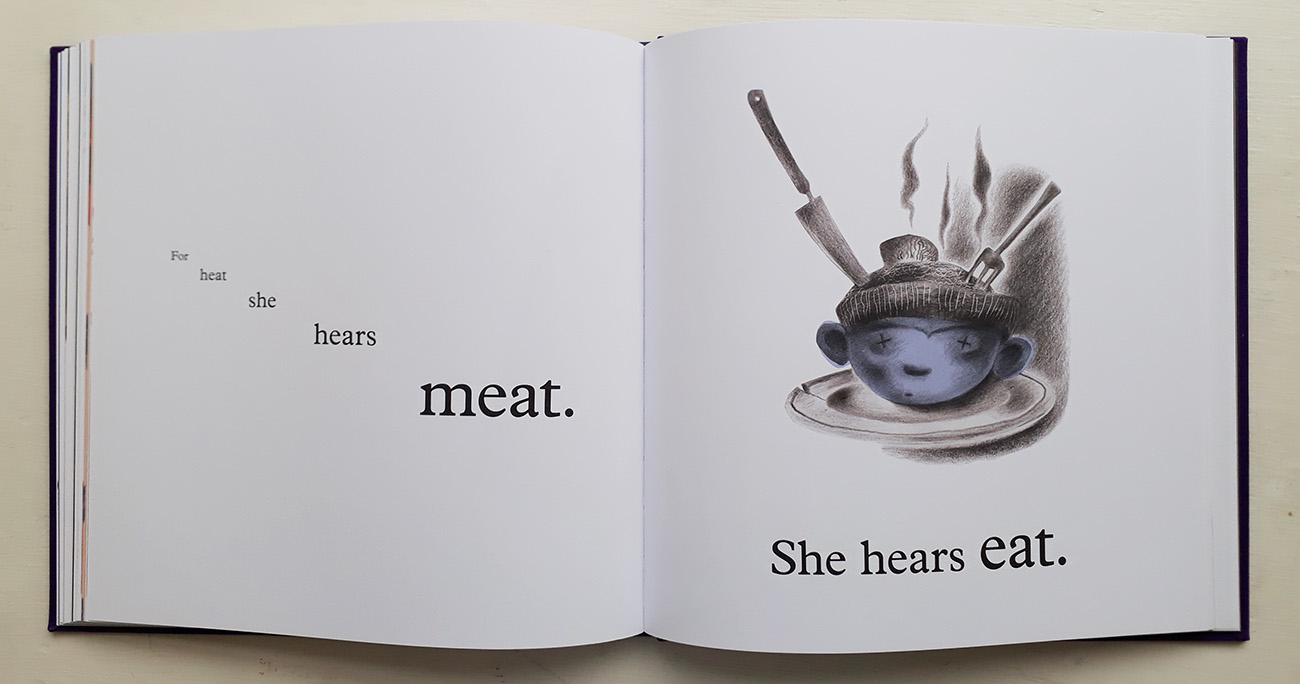 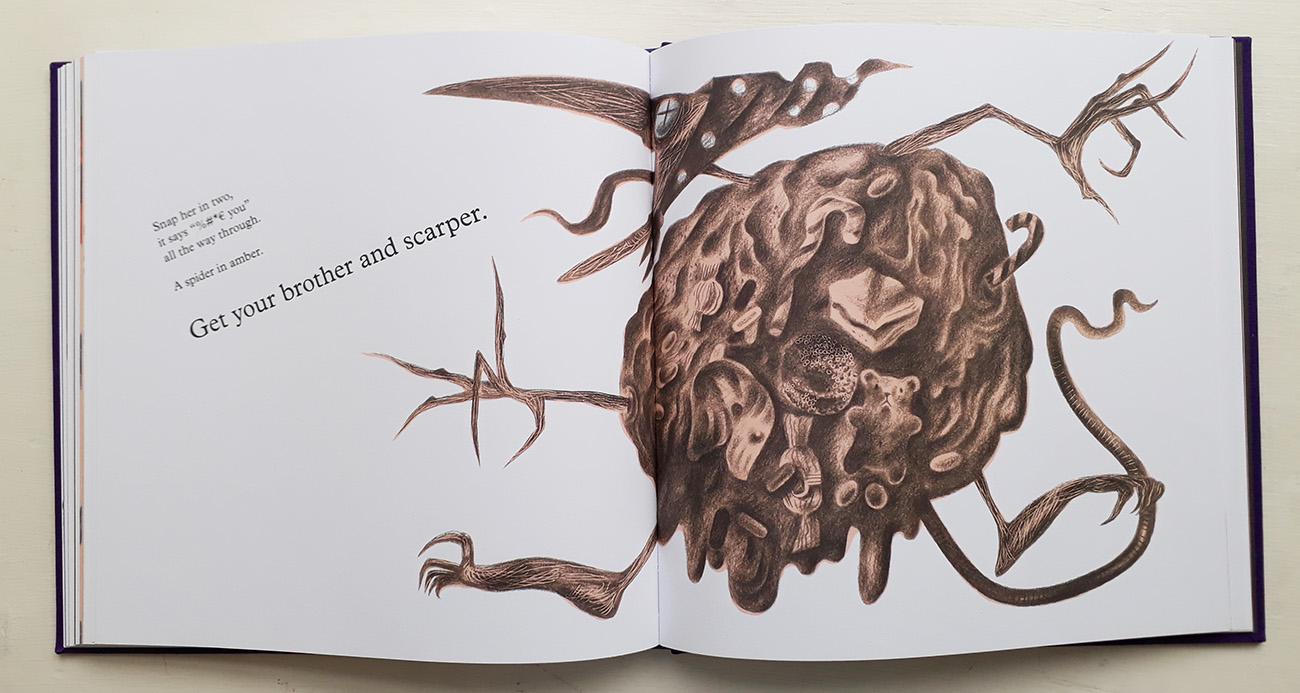 Fooling the witch Gretel gruesomely saves the day, and once out of the forest the duo’s escape across the water starts on the back of a mute swan, but mutates into a ‘gale force seven or eight’ in a leaky boat – the struggle of escaping to a better land. However, they make their way back, picking through bullet shells, shattered glass and worse,

that lead to a pile of stones

that was once a home.

And a husk of a man

Sitting there on his own.

Where is their mother after the air-strike that destroyed their home? And where should the broken family turn to now? 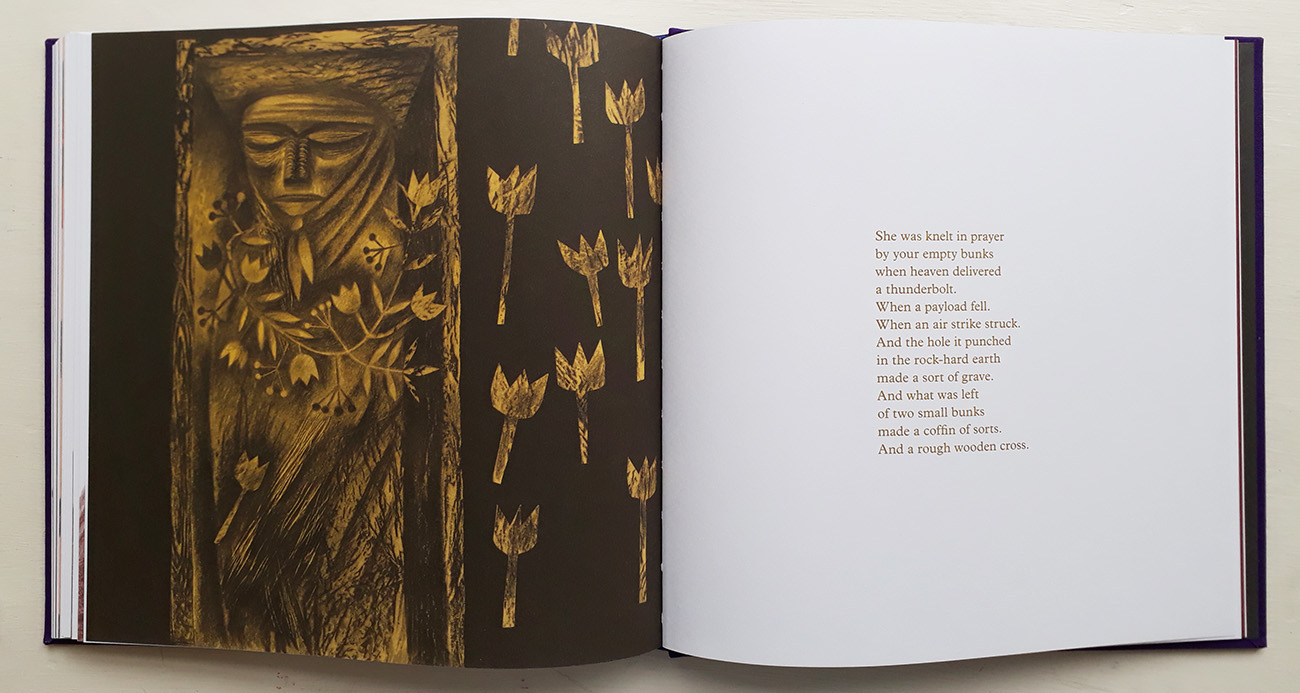 Spaciously designed by Laurence Beck, type sizes jump up and illustrations bleed off the page or completely fill it, keeping the eye leaping across the page. Still, readers don’t need any encouragement to keep turning, this is beautifully produced book with a contradictory scent of sugar and swamp that combines the witty, scintillating text with memorable images of darkness and light.

Published by Design For Today