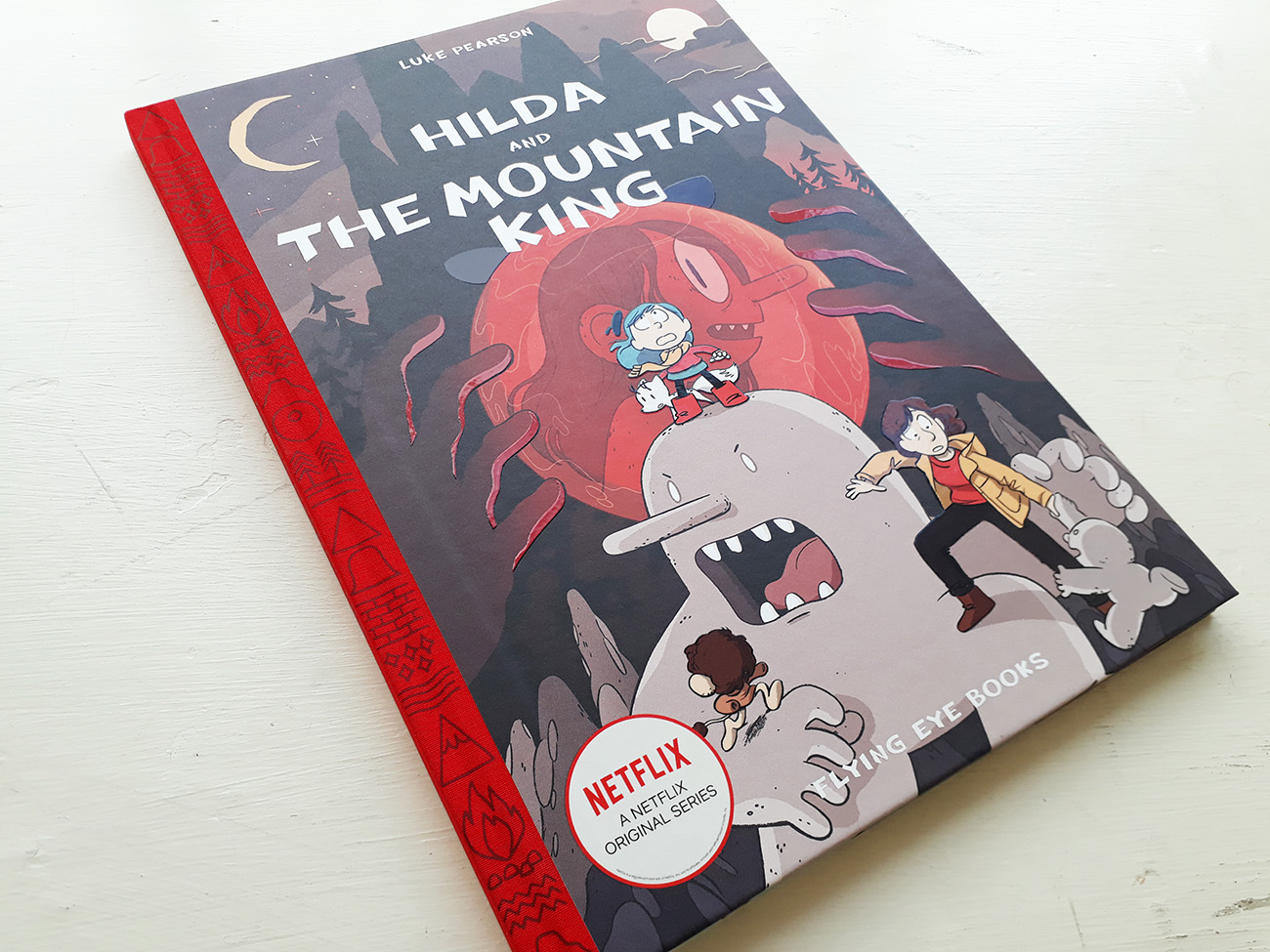 Whether you are a comics aficionado, have children who have been anticipating the latest of the HIldafolk series, or are completely new to the work of comic author Luke Pearson, you won’t be disappointed by the latest edition. In a strange and magical world where Trolls live alongside human beings, Hilda and The Mountain King sees the young protagonist Hilda dealing with the challenges of being transformed into a Troll, trying to get back home to her Mum, but at the same time discovering more about the community of Trolls from the inside, witnessing the conflicts and challenges of power, difference, misunderstanding, loss and deceit. 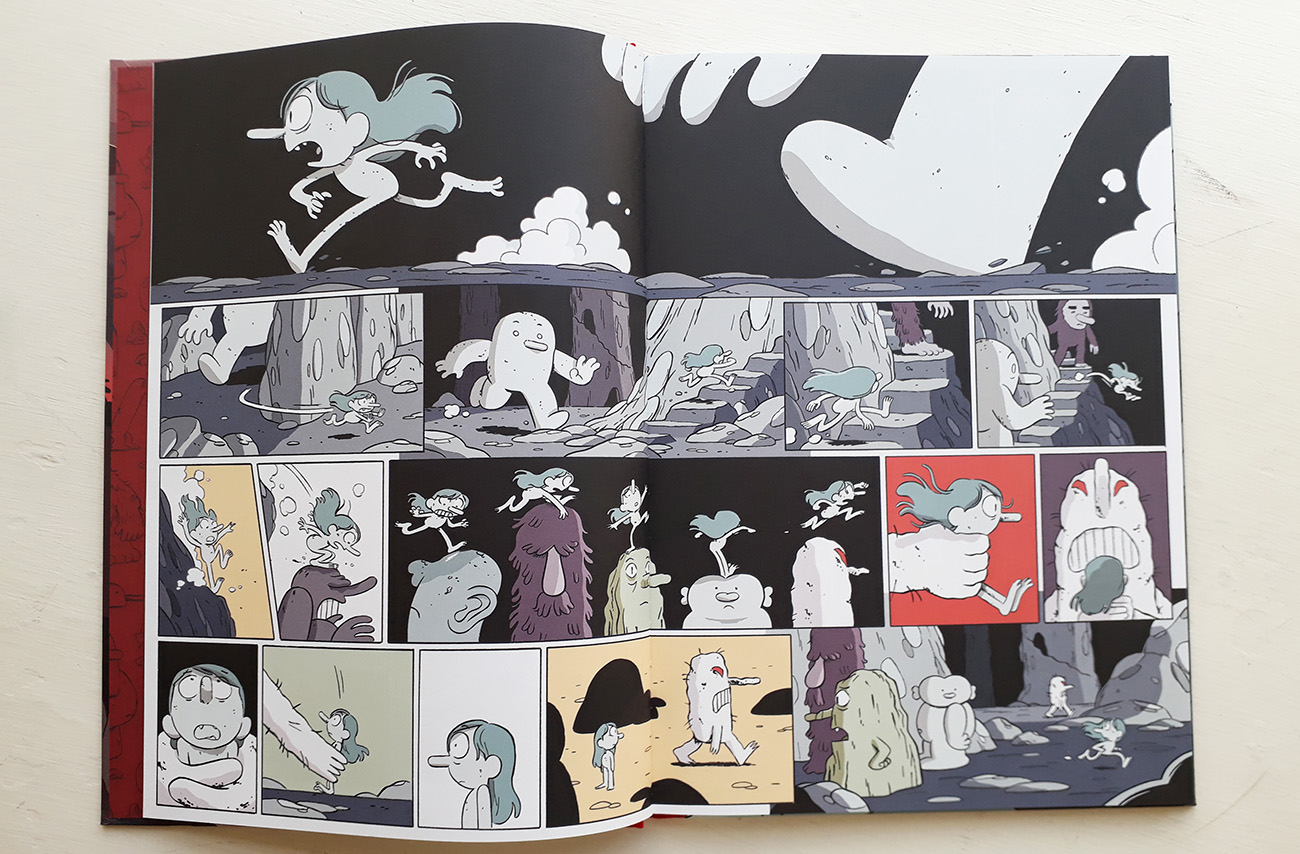 If you are new to HIldafolk you will be intrigued by, and drawn to the main character whose resourceful, brave and feisty attitude is balanced by episodes that are eminently relatable to young children. In this book we return to the strange urban landscape surrounded by mountains to find that Hilda is gifted with superpowers, but young readers will nonetheless recognise themselves in her credible traits; frustrated and grumpy in the face of adversity, sometimes a bit sarcastic in her reposts, occasionally lost and vulnerable. This hybrid of enchantment and reality is a distinguishing trope of this series.

Although Hilda and The Mountain King shares the poignance, wit and thought-provoking traits of earlier books it is clearly meant to function as a standalone text with its own focus and adventure. In this narrative the notion of Mother, through archetypal traits manifest by Hilda’s own mother, is evident. Her angst and determination, strength and vulnerability when trying to be reunited with Hilda, is simultaneously reiterated through the sacrifice of Amma the Grandmother and Mother of all Trolls separated from her own children. Equally we are reminded of the omnipresence of our ancestors and their continued impact on our lives. 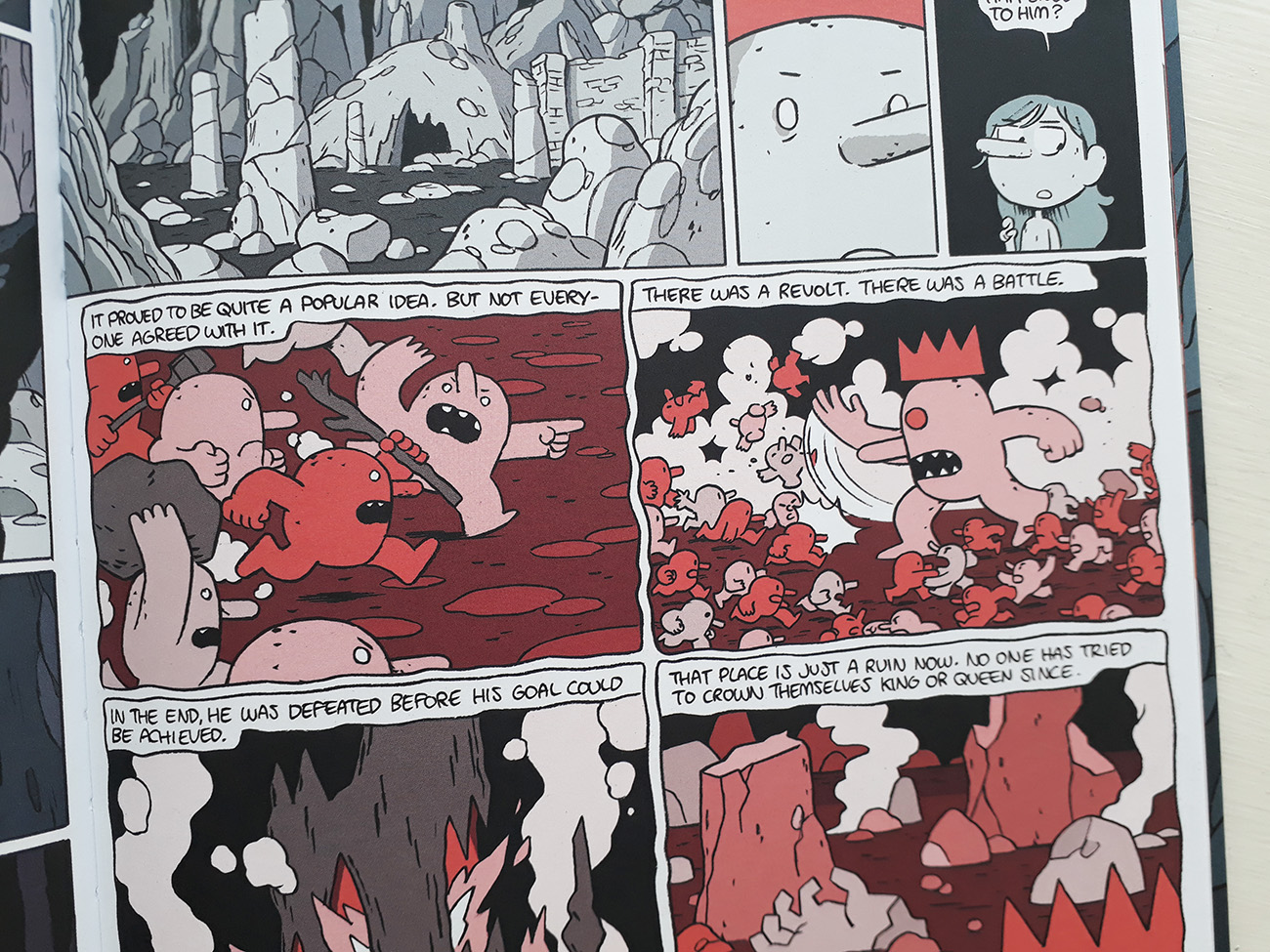 Populated by Giants and Trolls this multi-layered story has distinct threads to the Scandinavian folklore that Hilda’s creator acknowledges as an inspiration, resulting in a latent darkness and obvious magic that lends a classic quality to the narrative. Without being preachy, broad philosophical themes with contemporary resonance, such as intolerance, are confronted with a simplicity and directness. We are reminded of the futility of fighting seen through the war that Hilda tells us doesn’t have to be, and that there are all kinds of troll, “all with different ideas and priorities good bad, stupid. It can be hard to find common ground. It’s quite frustrating really.” 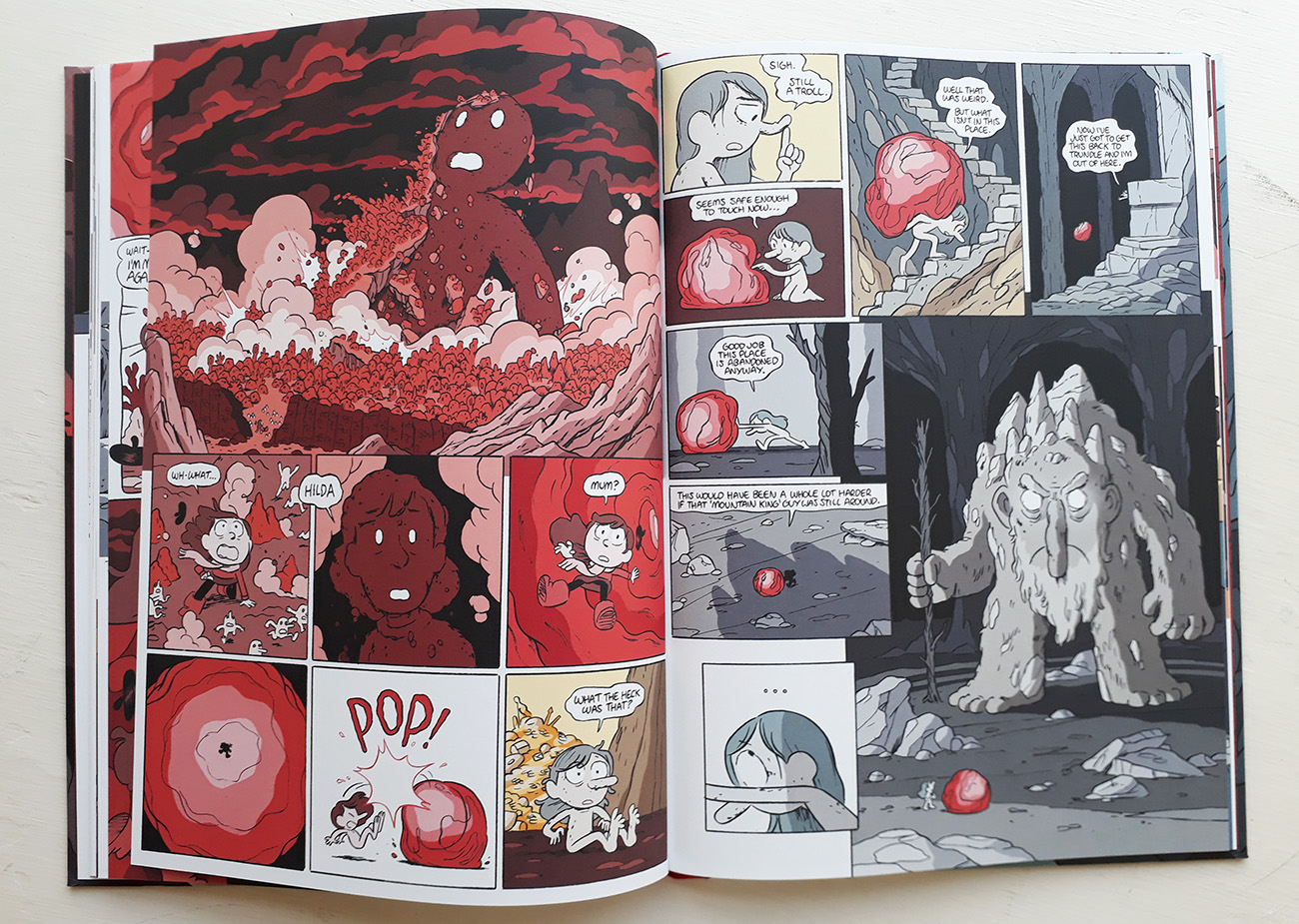 The astute production qualities that position Flying Eye Books high on the list of publishers consistently achieving aesthetic allure are evident in the hardbacked spot varnished cover (is there homage to TinTin in there?) through to the character filled end papers. The book has weight, its pages uncoated and the colour rich throughout. The controlled palette also contributes cleverly to marking of plot points as well as signalling where we are in the story, distinguishing the drama, absorbing us in a grey landscape during melancholic moments, its warm tones signalling optimism when it is mooted that, “perhaps one day we will live truly peacefully side by side.”

Packed with action that will appeal to children and adults alike Hilda and The Mountain King is a book that you will pore over again and again. It has much to offer an audience of all ages and will have an enduring appeal.

Jo Davies is Visiting Professor of Illustration at Plymouth University. With Derek Brazell she is co-author of several books about illustration that are published all around the world and is recognised as an educator and lecturer in the field internationally. 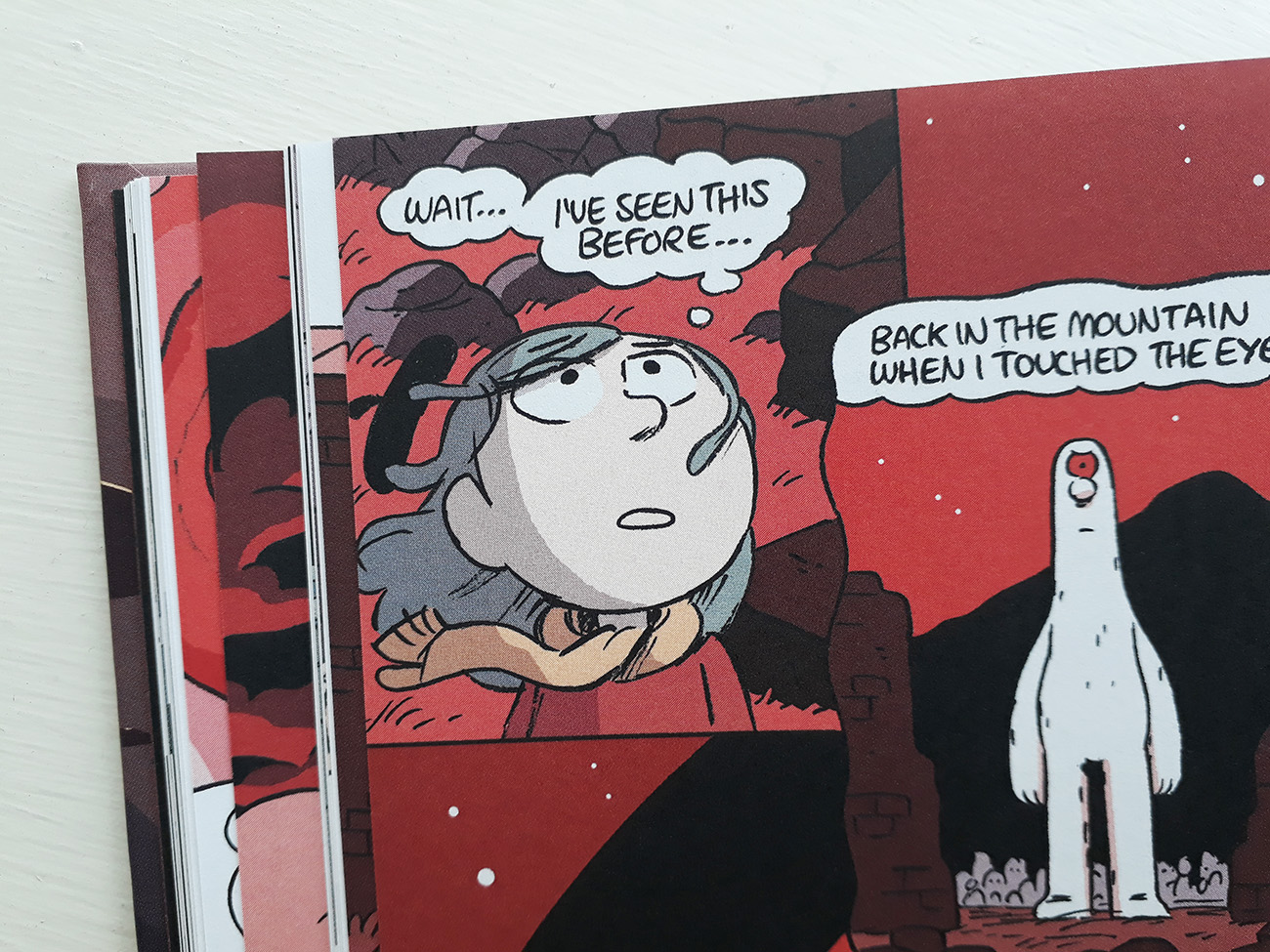