The West of England/Bristol’s Illustration scene is bubbling this month, with heaps of creative events including PiP Illustration Meetup, Shake Bristol, and BCZF. Therefore Bristol-based Member James Davies was the perfect candidate to fill the position of Illustrator of the Month. Repped by Caroline Sheldon Literary Agency, James creates bold and colourful Illustrations for the UK publishing market, specifically children’s books with clients Templar and Penguin.

From studying illustration at AOI Member College UWE just over one decade ago. James has developed a self-described ‘stylised’ portfolio, that we agree is rich in colour and content. With the addition of him also being a super nice and down to earth person! 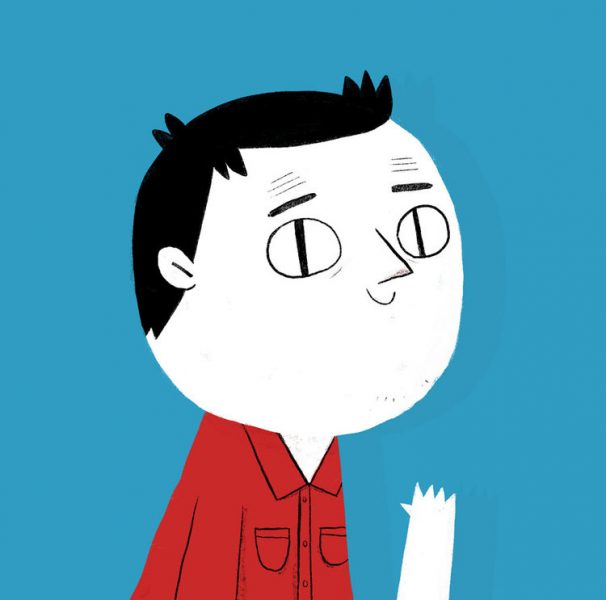 Earlier on this year, you shared with us the final outcome for your ‘Meet the..’ series. We are thrilled to hear you are releasing two new books in the near future; can you share some secrets for the new stories?

The Meet the… series has been such a cool opportunity, and I’ve learned so much from researching and writing about all these amazing (and sometimes slightly awful) cultures and individuals. We started the series with a look at Ancient Romans and Egyptians early this year, and January will see the release of two new books in the series! We’re heading back in time to discover more about Ancient Greece – how the Olympics worked, what clever inventions they thought up, and who was that guy with a bull’s head? In the other book, we set sail and explore the golden age of pirates! Who was scariest? What IS scurvy? And did they actually have peg legs?

The books are so much fun to work on, and Big Picture Press are wonderful to work with. With every title I try and push my work that little bit more, and I’m super excited to see the four books together on shelves. 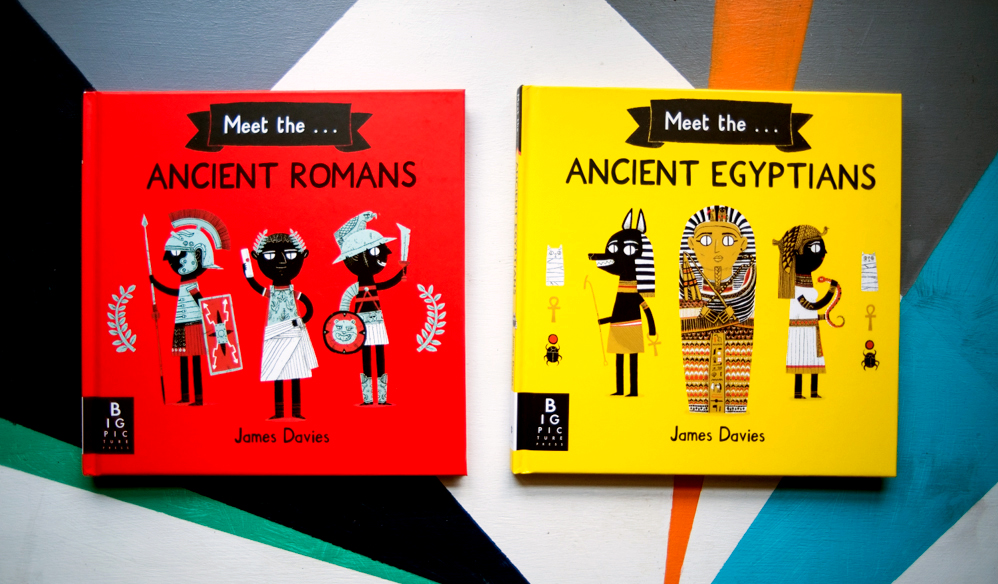 Your NEW fiction Children’s Picture Book with Templar is about a boy and his long dog, aptly-named Long Dog. How do you feel writing and illustrating children’s fiction compares with non-fiction?

I think writing picture books, or any kind of children’s fiction, is much harder than a lot of people realise. Writing the Meet the… books was definitely a challenge, but in many ways the stories are already written and my job was to take it all in and make the facts digestible and funny. Similarly, when illustrating, there was tons of reference to simplify and translate into my style. 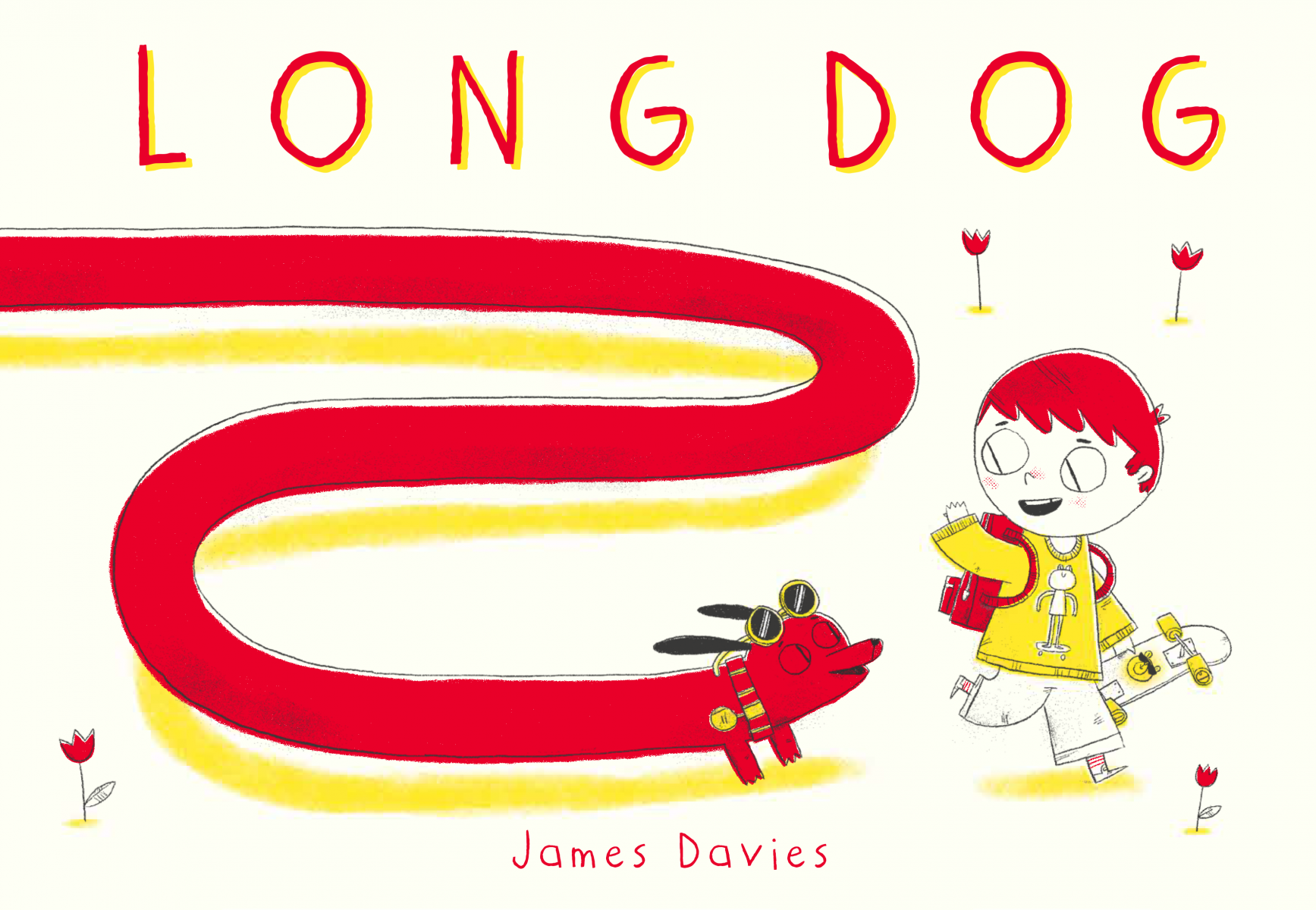 When I started writing Long Dog, I realised the possibilities were endless! There was a lot of paring down the weirdest ideas and thinking about how such a long dog would fit into the world, which is a weird thing to think about. Everything clicked when I developed the illustrations – I really wanted to use a very limited palette and simplify everything, which fed back into the story. Long Dog was a long process, but the amazing team at Templar really helped and did an amazing job, making it a debut picture book I’m really proud of. 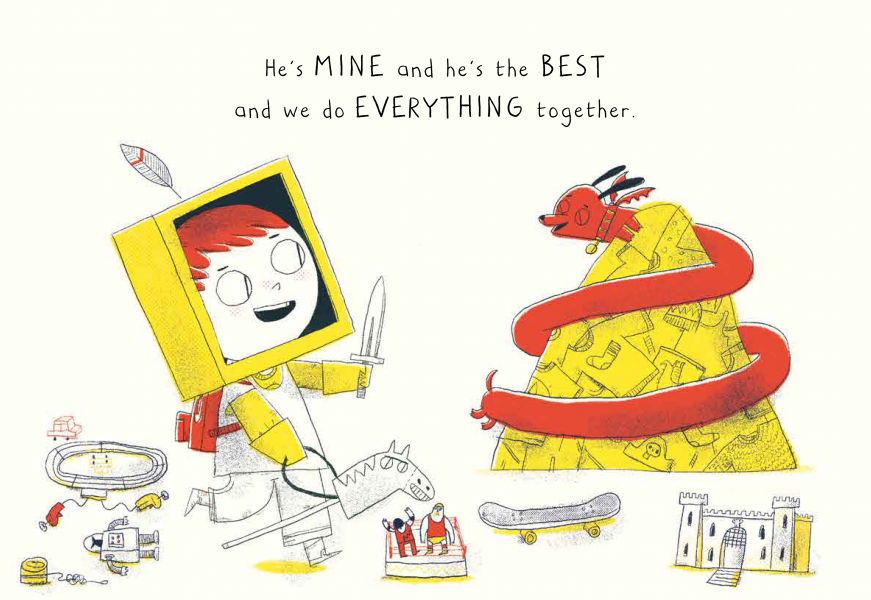 We recently spotted this inspiring Instagram post. Can you let us in on your thought process when developing the Long Dog narrative?

I think that post goes to show that even your silliest ideas can turn into something, and everything you create is valuable. In a few minutes I draw all the weirdest book ideas I could think of without giving it much thought, and two years later one of those ideas is on shelves everywhere!

From the start, Long Dog was about celebrating your uniqueness. The other dogs in the book aren’t like Long Dog. Sure, they’re fat or tall or skinny or tiny, but who ever heard of a Long Dog? Ridiculous. But when disaster strikes, and Long Dog saves the day, everyone realises that all the dogs are rad.

The story is told from the point of view of Long Dog’s owner, who’s completely crazy about his amazing dog but no one else can quite see why. I thought a lot about how this kid might talk about his long best friend, and what a complete hero his pet is to him. The hardest part was thinking about how Long Dog could utilise his longness to save the day. To plan the narrative out, I wrote fragments of ideas on hundreds of Post-it notes and rearranged them on my wall. It looked like a crime scene, but it worked.

Can you tell us about your on-going illustrations for Penguin’s Social Media Campaigns? How did this opportunity come about?

This came about two years ago when I was having a bit of a change-up with my work. The Penguin social media team saw my new approach on social media and got in touch. That’s how I’ve got most of my work, actually! Since then, I’ve been making images for their Christmas and Easter campaigns across social channels, as well as other bits and pieces like their ‘Read the Year’ campaign. I’ve also made animations for them, plus greetings cards and wrapping paper. Penguin are great to work for; their briefs are very open, and they let me experiment a bit. 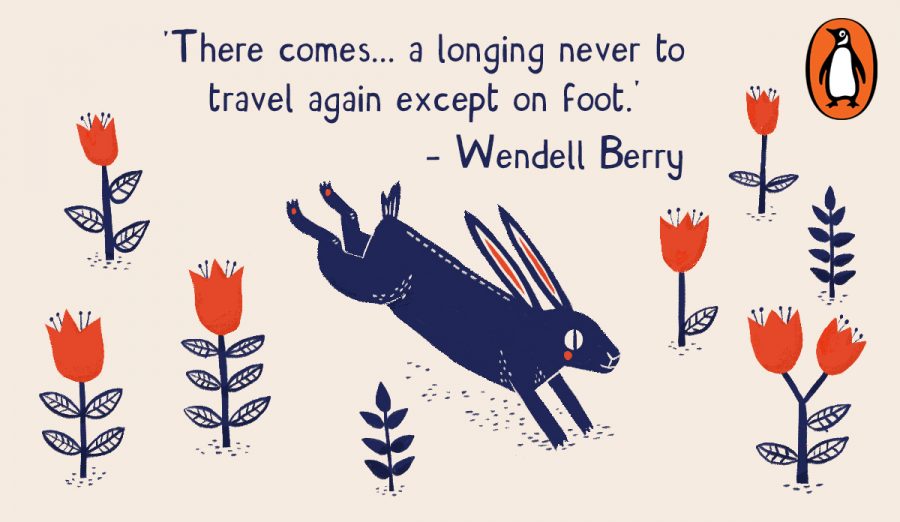 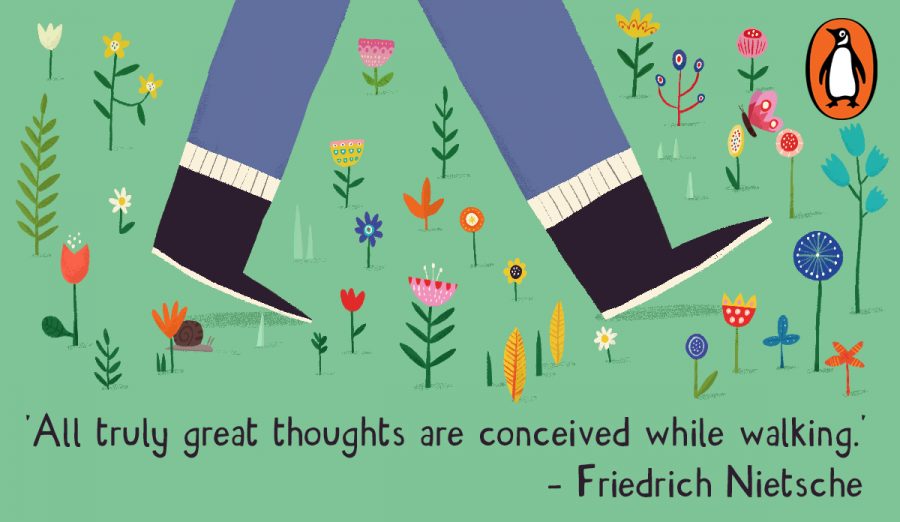 It’s clear from your social channels you frequently create and share new work. Do you feel it is important to have personal projects always on the go?

Absolutely, you should always have something on the go. It’s kind of easy when you’re an illustrator to only do work FOR work, but drawing should never be a chore – it’s one of the most fun things ever! Sometimes, when I’m in the middle of a crazy deadline, I’ll just draw and draw anything I can think of as a stress-buster. Sometimes I just want to draw characters from whatever book I’m reading (I’m catching up on Harry Potter now, very late) or just try a weird colour scheme I’ve seen somewhere. It just doesn’t always work, but I just post everything on Twitter/Instagram and it’s interesting to see the things people really go for – it’s usually not what I’d expect. I seem to be drawing a LOT of skulls at the moment, with no real direction other than skulls are fun. ‘Tis the season, I suppose… 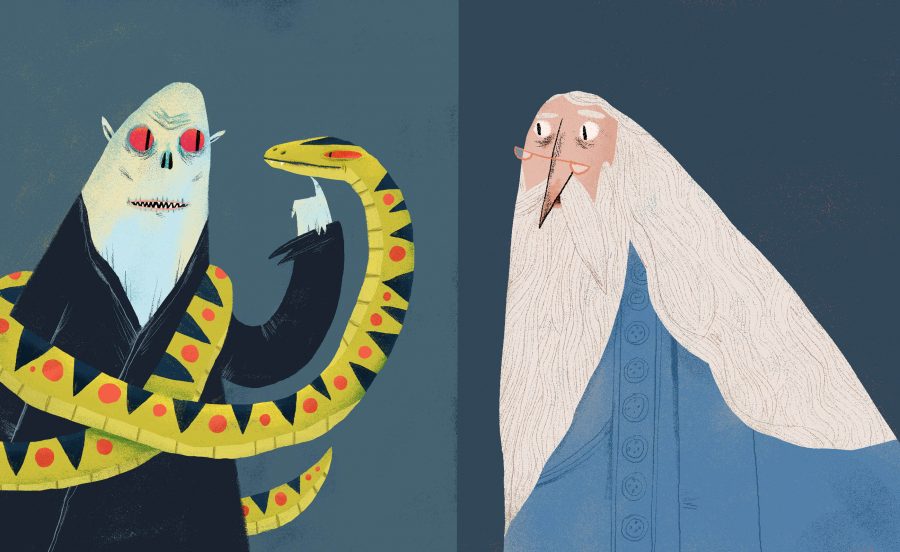 Can you describe your artistic process?

I’ve had some very tough deadlines over the past few months, but I’ve always enjoyed working as fast as possible and getting ideas out before I can overwork or rethink them. The illustration style I have now is hugely changed from how I was working before. Then, I’d have mountains of paper with tiny pencil lines on, scanning in everything and taking forever. Now, I do everything digitally in Photoshop, using my three favourite brushes. I feel slightly guilty at how little pencil and paper drawing I do these days, but I guess you just find what works!

Something I really enjoy doing is setting limitations for myself, like little challenges. I try not to use more than three colours and try and use as few layers as possible in Photoshop. This leads to everything being simplified down to pretty basic shapes, which I then work over with lines and textures to make them a bit more detailed. It’s a process that changes every day, which makes every new illustration really exciting for me (and hopefully others.)

I don’t feel my work is very polished, but I don’t necessarily want it to be. 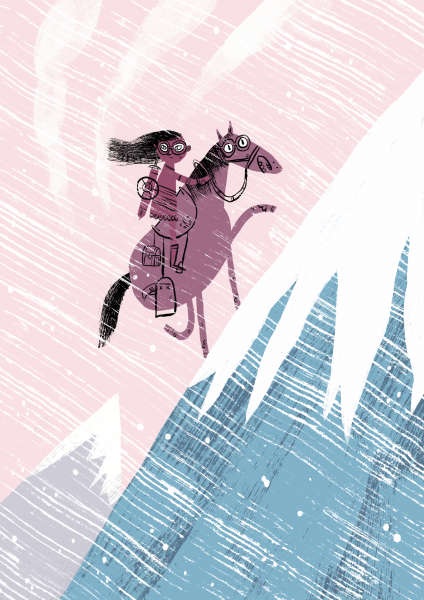 Can you share your thoughts on the Illustration scene in Bristol?

I returned to Bristol, back to my university City, two years ago after living briefly in London and Wales. To be honest, it’s taken me a while to make many contacts and start getting involved, but that’s mainly because I then worked from home and lost myself in lots of very tight deadlines. There was a lot of talking to my cat, which isn’t really a great scene. However, over this summer I moved into Dove Street Studios with a whole bunch of really great artists, where I’ve now got a network of actual humans to share ideas with.

When I studied here in the late 2000’s, it sometimes felt like there could be more going on in the Illustration scene. It’s always been a beautiful city, but over the past few years I think Bristol’s really developed its own identity; there’s an energy here which makes it a great place to live and work. Shake do amazing stuff all the time, and after the first PiP Meetup I’m excited to go to more.