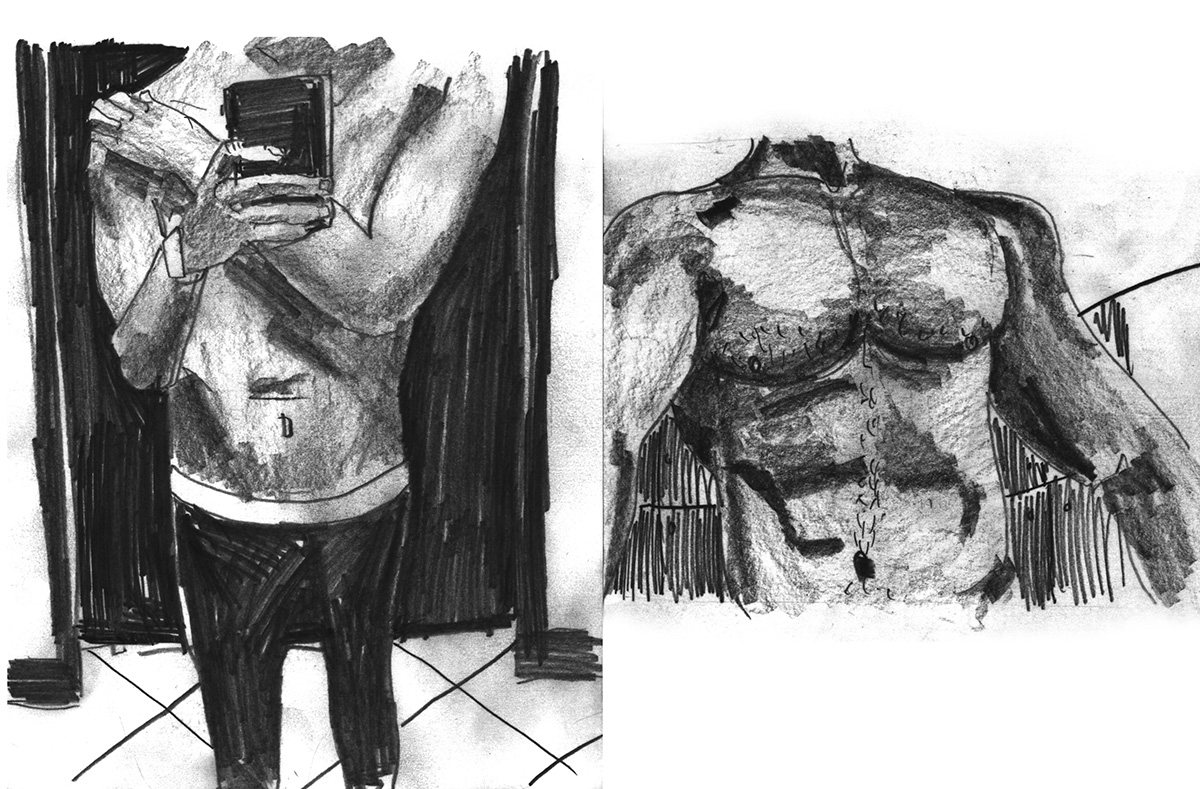 Since 2009, Grindr has introduced millions of people. The dating app is the largest social network for gay and bisexual men in the world. Users download it and are connected with people in their locality – they can choose who to contact from a grid of photographs, no doubt painstakingly crafted by their subjects, but judged in fleeting moments by prospective matches. 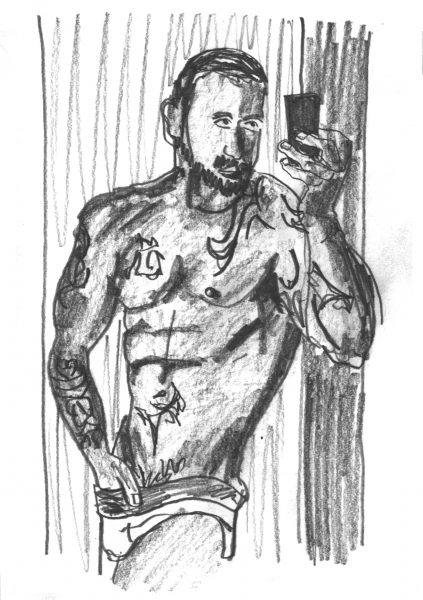 Wingate’s tender drawings reveal the character of a private space that is largely closed to non-members. His portraits make the paradoxically depersonalised social media profile pic ‘human’ – each avatar he encountered was carefully observed and captured in “a brief moment of intimacy”. At the same time, the use of soft grey pencil to represent hundreds of different people protects their anonymity, and positions individuals as part of one community. Wingate considers these drawings collectively as an “archive” – they are a document of the way significant numbers of gay men are constructing and expressing their identities online in order to find sex, love and friendship. His subsequent series of drawings, Shirt Lifters, saw him draw Grindr users both from their profiles and from life, highlighting the inevitable gap between online persona and reality. 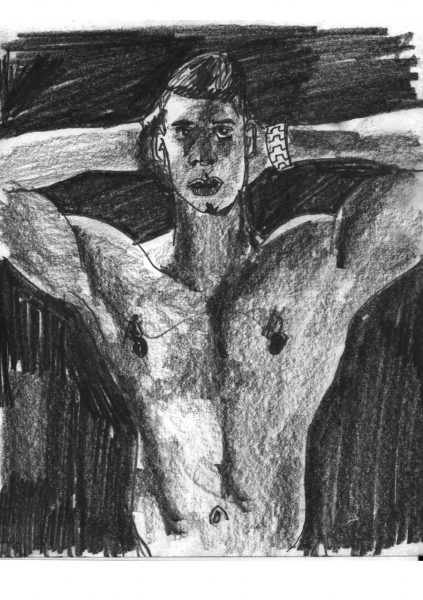 Wingate embroidered a selection of his Grindr drawings onto a quilt, forming the focal point of his degree show at the Royal College of Art in 2017, the year marking the 50th anniversary of the beginning of decriminalisation of homosexuality in the UK (a process that didn’t end until 2013). Quilting is traditionally a communal, domestic activity, and quilts themselves are often heirlooms – handed down to generations of family members.  This quilt asserts the importance of recognising the shared heritage of the gay community, and the vitality and value of its new spaces. 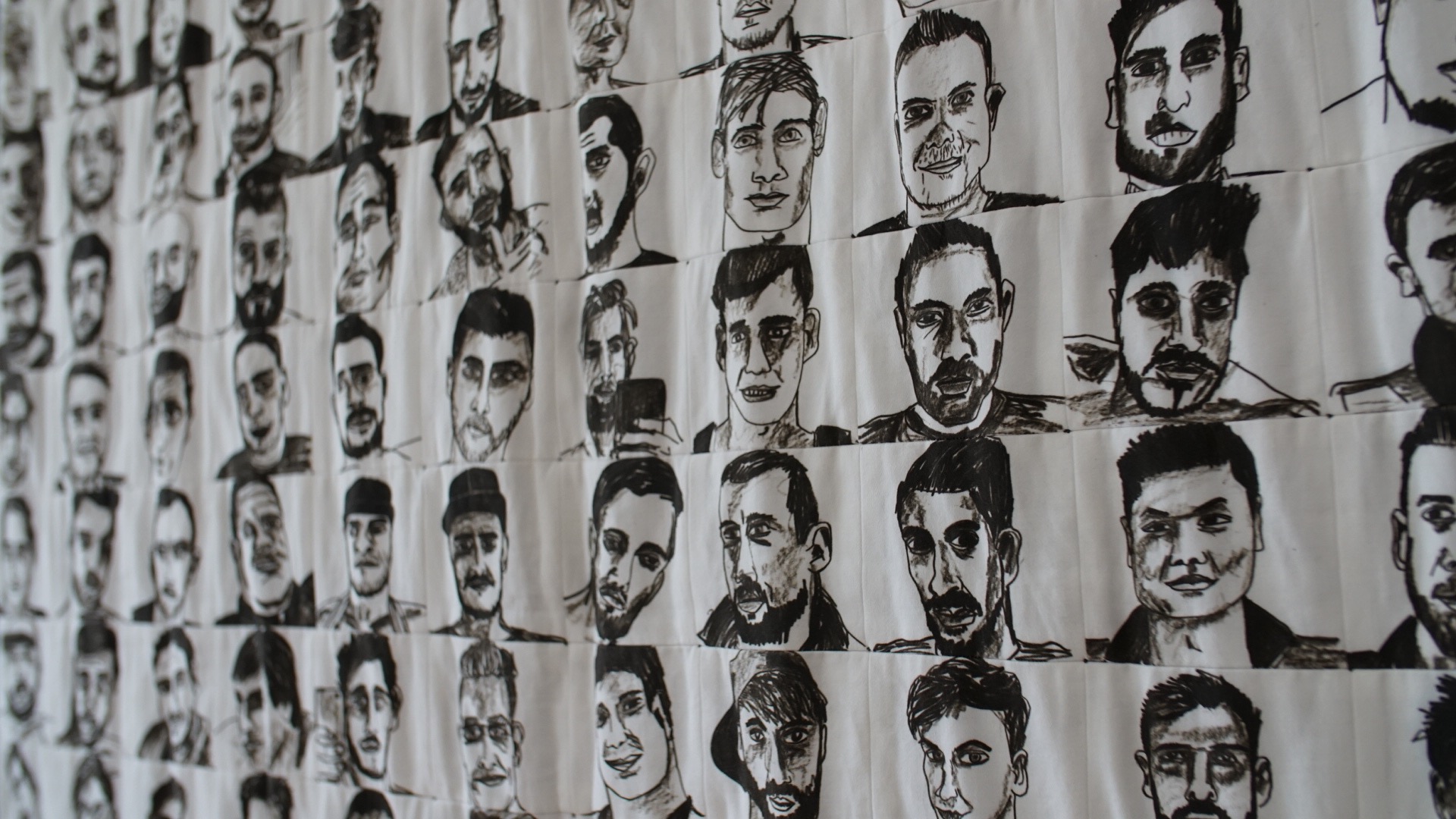 Grindr Drawings began as a procrastination activity whilst writing my MA dissertation on the visual language of LGBT protest.  I had been exploring the shifting position of gay men in British society since the partial decriminalisation of same sex acts between men in 1967 and Grindr Drawings form part of a portrait of male homosexuality in 2017.

Grindr Drawings went onto inspire and feed into other projects – Grindr Quilt (a site-specific portrait of Grindr from the RCA Kensington), and Shirt Lifters (a series of drawings made directly from Grindr and from life, highlighting the commonly found “Shirt Lifting” pose on Grindr profiles).

Grindr is a networking app aimed at gay men, and has common association with quick sexual hook ups although it provides a platform for gay men to meet with many varied outcomes. 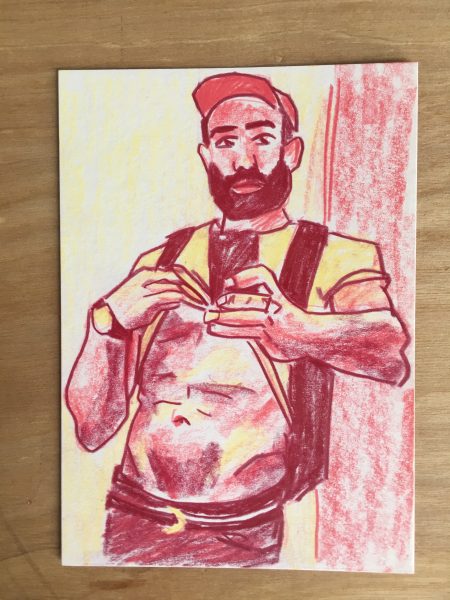 Shirtlifters from Grindr Profiles (Size A6)

Research ‘in the field’. Direct recording of the Grindr interface, coupled with meeting subjects for drawing from life.

For Grindr Drawings I made quick sketches directly from Grindr users profile pictures.  The speed of the drawings (evident in their appearance) has some connection with the many brief connections made on Grindr each day. Once I had drawn someone’s profile picture I would send it to them through the app, an action that elicited varied responses.  Often ignored, frequently complimented and occasionally the beginning of a picture dialogue – “Draw this….” From here an exchange of pictures and drawings commenced.  One rule – I would only draw the pictures that men had stored to share with each other anyway.  In this way, I began to create an archive of ways in which men represent themselves online, through Grindr today. That this archive was made up of quick drawings protects the identity of the subjects. I wasn’t looking to out anyone, and it’s very unlikely you would recognise a colleague, brother, or even partner from the drawings.  Much less would you recognise a father or uncle in 50 years when looking back through this archive. 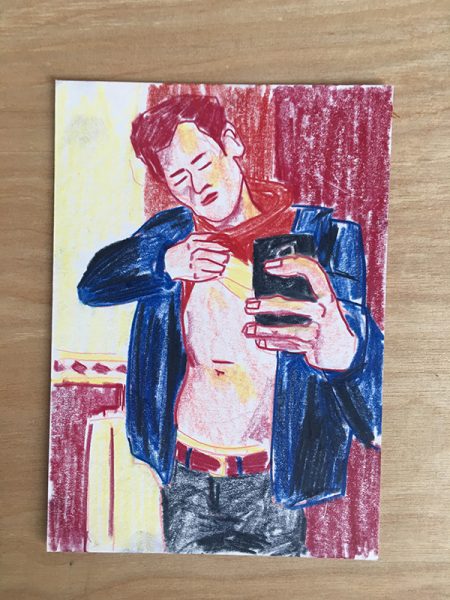 From these commonalities I have been able to start making new work. Shirtlifters is a series of drawings made both from Grindr profiles and from life – with Grindr users as models in the studio.  Small colour drawings represent Grindr profiles, and larger graphite drawings at a scale closer to 1:1 represent the model in the studio.  The drawings account for the shift between online digital presentation and IRL (In Real Life).

The series led to a portrait of Grindr in the South Kensington area (Grindr Quilt).  The quilt was chosen as a format as it held values I wanted to imply were held within Grindr as a queer space.  Quilts are often inherited objects, and I wanted to make the connection between anonymous sex that was a necessity of homosexuality in the period of outlaw and casual sex commonly associated with Grindr. Quilts are also domestic, associated with the bed and comfort, which were important contrasts between Grindr connections and those made seeking sex in public spaces.  One side of Grindr quilt shows the pattern found on the floor of the RCA (where the work was exhibited) stitched from black and white cotton.  The time spent stitching these together adds to the value of the quilt and reflects a value that Grindr has as a queer space in 2017.  The other side of the quilt features portraits of Grindr users in the Kensington area.  Only the faces are included in these portraits – this suggests a deeper connection that can be made through use of dialogue available through Grindr which is missing in other traditional pick up spots – where communication is without words. 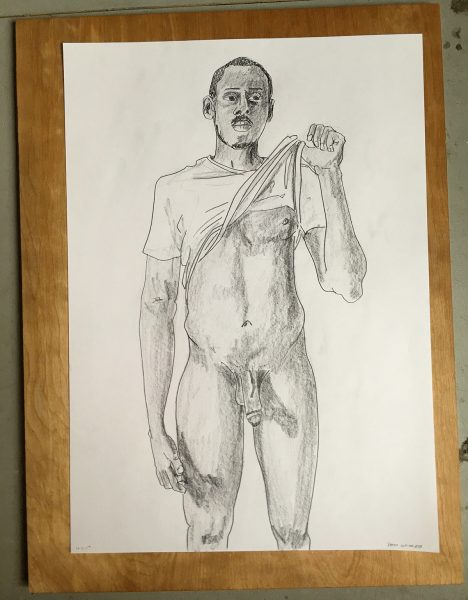 One difficulty in treating Grindr Drawings as an archive of the way men represent themselves online is my role as editor.  By no means are the drawings a complete representation – I have edited the selection from the start, picking profiles which I find appealing or that I think would make a good drawing.

For Shirtlifters, I worked with models in the studio.  The shirt lifting poses I asked them to recreate from Grindr are hard to hold – arms tire and the models need to take lots of breaks during the poses – never really quite finding the original position.  The duration of the drawings (between 20-30 minutes) means the pose loses the sexy quality achieved in a photograph – and becomes something more awkward and uncomfortable.

Throughout the projects I learned of the value that Grindr has a queer space. It often gets a bad rap – there is an idea that it is only a space for guys to meet for anonymous sex and it gets blamed for the closure of queer venues.  But, it’s an amazing tool that enables gay men to meet other gay men, within their geographical area, that they otherwise might not meet in their day to day lives. And connections can be made on many more levels than just a sexual one. 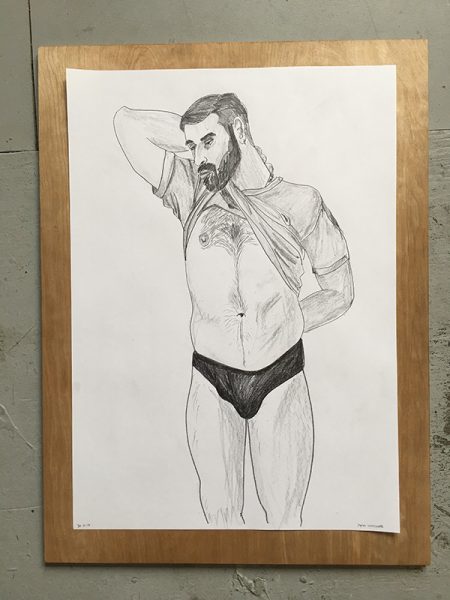 Grindr itself is a very distracting thing to research, it is hard to avoid getting pulled into conversations and there is definitely an addictive nature to the app.

502 Drawings made from Grindr

Grindr Drawings capture the visual presentation people give when trying to connect to others often for reasons of love. In September, I got married, to a man I met on Grindr.  His profile was not one of shirtlifting, it was a drawing, that over a course of about a week was updated, from an outline to a fully shaded architectural sketch.  This drew me to initiate a conversation, which led to a chat over a pint which 5 years later led to our marriage, all starting from a drawing on Grindr.