Not just anyone can say they have coined the style ‘psychedelic slacker goofball’ in quite the same way as Director (Animator) and Illustrator, Stevie Gee.

Last month he made a remarkable impression at the World Illustration Awards, taking home not one, not two, but three award prizes on the opening night. Wanting to extend this opportunity we talk to Stevie about his success in Design, Advertising, Music and Products and what’s next on the cards for this Illustrator.

Stevie’s cool list of clients include; Vans, Patagonia, Nike, Adidas, Lacoste and many more. He has exhibited his work on a variety of platforms in London, New York, Sydney, Bali and Tokyo. Stevie takes some time to shoot us back some answers to the anticipated member Q&A.

Your mix-and-match kids box packaging for Stella McCartney took home category design and overall professional win at the World Illustration Awards with an explosion of colour and lively characters. How did you find this experience?

Stevie Gee: Winning these awards means a great deal to me. Looking at all of the incredible entries at the awards show, there was so much really cool work there, it’s a real honour to have been chosen. I have only taken on the role of animation director on top of the illustration full time for the past two years (although I have been practicing illustration professionally for 15 years). I’d always had a day job so there has been a lot of late nights and weekend work. Experiences like winning at the World Illustration Awards reassures me that I did the right thing quitting my day job and going full time when I did! 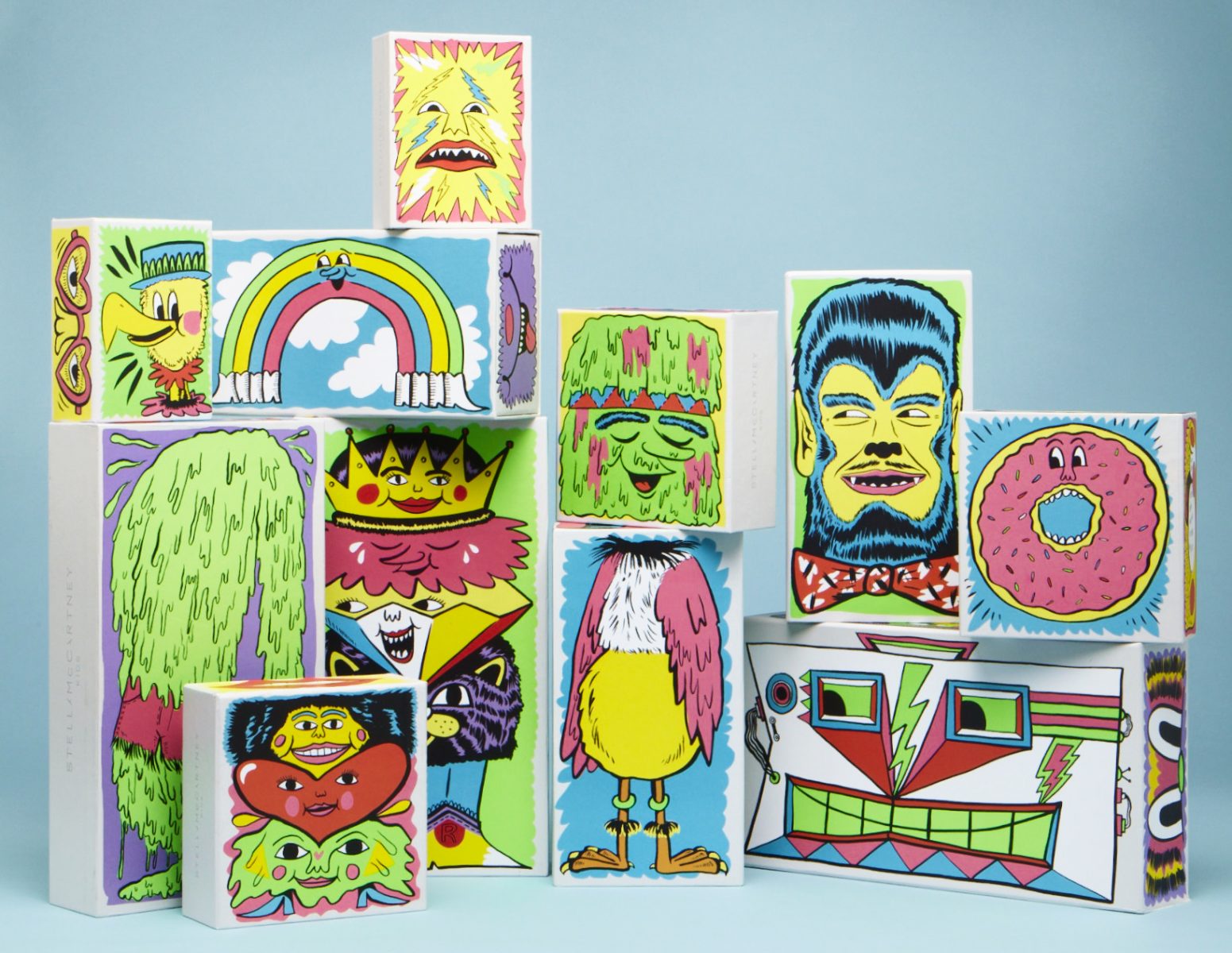 The second category win in Advertising for the Adidas ‘Here To Create’ football campaign with Iris London and skilful partnership with Nicos Livesey. How did this collaboration work? Did you design everything to then pass forward to Nicos to animate or was it more spontaneous than that?

Nicos and I are both represented by Blink Art Agency, he as a Director and myself as an illustrator, so our agents suggested we team up and work together as we have a similar aesthetic and style. We also like a lot of the same heavy loud music (which really helps when you’re trapped in room with someone for a couple of months!)

To make the animation we would chat through an idea and then I would get the brush and inks out and start developing the characters and visuals on paper. We would discuss what could be cool to do and then Nicos would get onto making loose animatics based on what we had decided together and work out transitions, and add rad moves to the animation. We would review all that together and brainstorm ideas for what elements to add in like snakes, dice, giant mouths etc. Once we developed something we liked, we would send to the agency and it would then go through a lot of approval processes before we were able to brief and direct the animators to go ahead with the project. It was a super fun process because both Nicos and I like the same kind of old-school animation, skate graphics and cartoons.

We have seen your designs on skateboards, bikes, snowboards, surfboards, shoes, hats and records (Also motorbikes, frisbees and recently the side of a building for Camden Hells). Is there an outlandish item or product that you haven’t yet illustrated that you would love to?

Mmmmm. Good question…. I’ve always liked helicopters, so maybe one of those? Ha, I dunno. I love muscle cars, but I wouldn’t want to ruin something beautiful with my goofball style so maybe just a small cartoon element like they have on the Plymouth Roadrunner. That would be so rad! 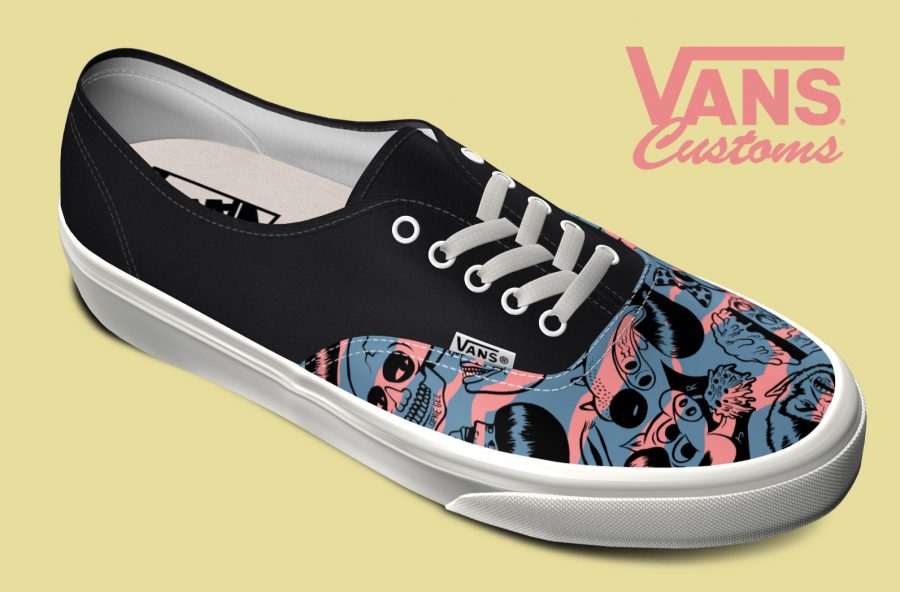 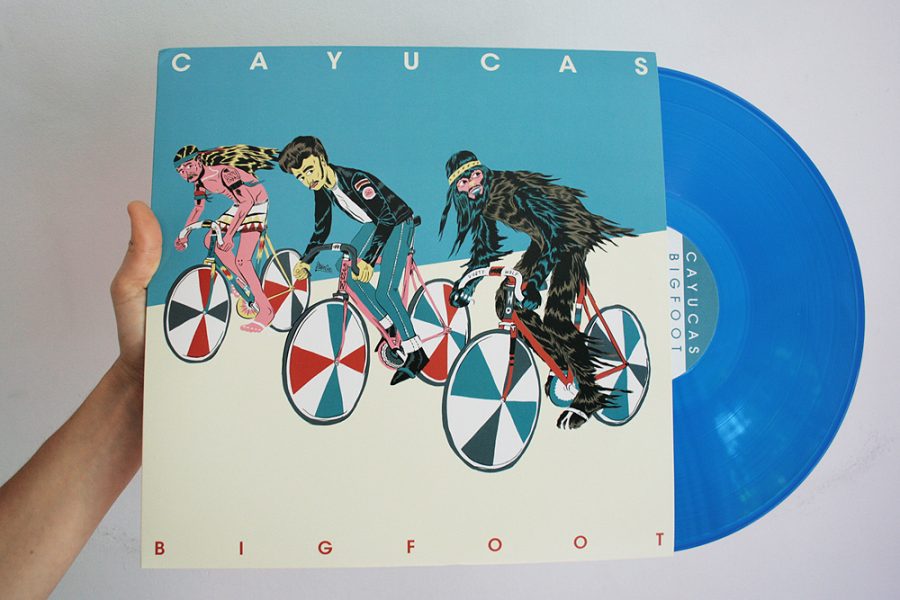 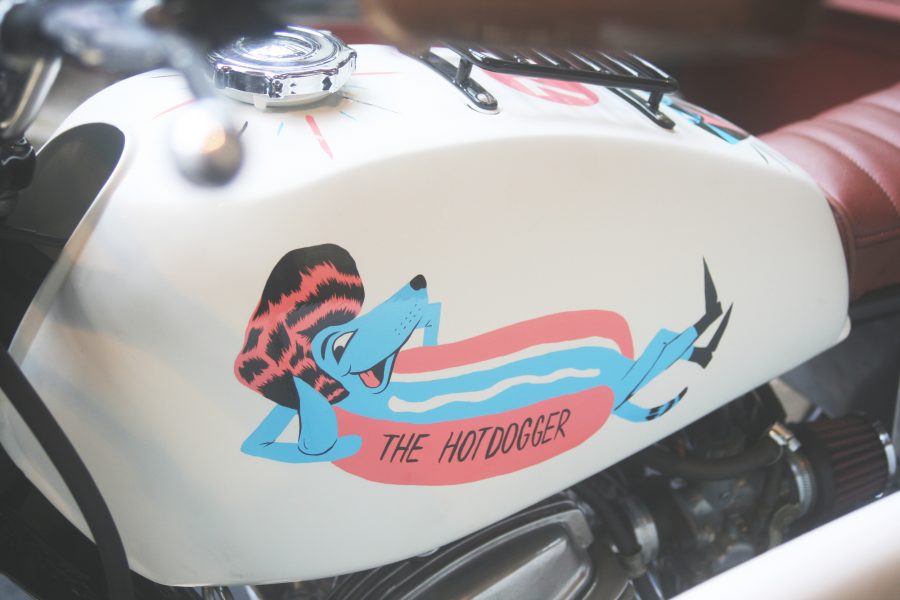 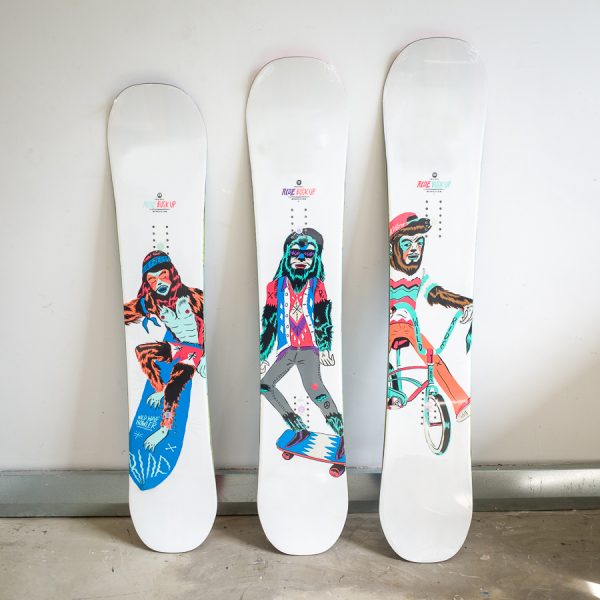 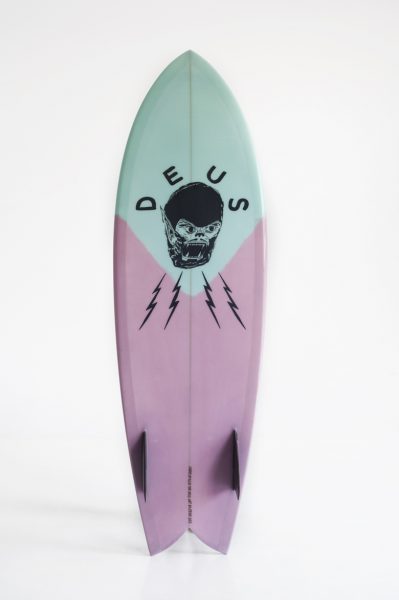 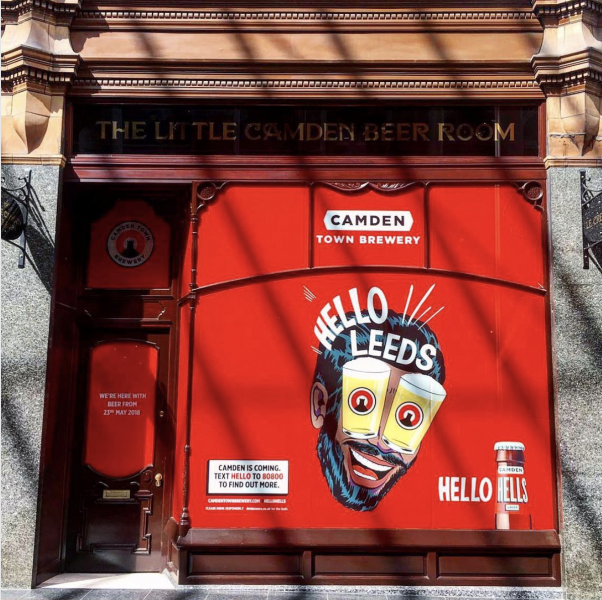 Alongside working with your wife Essy May on ‘The Gatekeeper’ music video by Cancer Bats and co-directing the ‘Steambreather’ video for Mastodon. We spotted the Dice Magazine cover on your Instagram illustrated by your children, are you keen on encouraging your kids to nurture their creativity?

Of course, for sure! They are both way better than me at drawing to be honest. It’s definitely true that small kids have a naturally free and uninhibited way of expressing themselves which we as adults are always trying desperately to re-discover.

My kids aren’t so small anymore though, one is a teenager and the other will be very soon. It’s not so easy to drag them away from their phones and get them to sit and draw with me anymore, but that doesn’t stop me from encouraging them to keep on doing it. To be fair, my daughter still does. I can’t remember the last time I bought a birthday card for someone as I always ask her to make them for us!

We noticed you directed a solo show in Japan last year. What was your experience like? How does it differ from your other exhibition experiences?

It’s probably one of my all time favourite places I have visited. It was my second art show over there, the first time I travelled alone, but this time my wife and kids came with me so it was a very different experience. I have been lucky enough to have been involved in quite a lot of art shows and stuff overseas but I have never before had my family with me, so this was very special. We went to a lot more touristic and cultural experiences rather than partying and that was amazing. I felt like we made the most of everyday there.

Japan has so much to explore, I am desperate to go back and see more of it. Tokyo is such an intensely visual place, and comics (manga) and anime are an integral part of the culture and not seen as a “lower art form” so there is a respect for illustration there already which is very cool. Katsuhiro Otomo is my all time favourite. 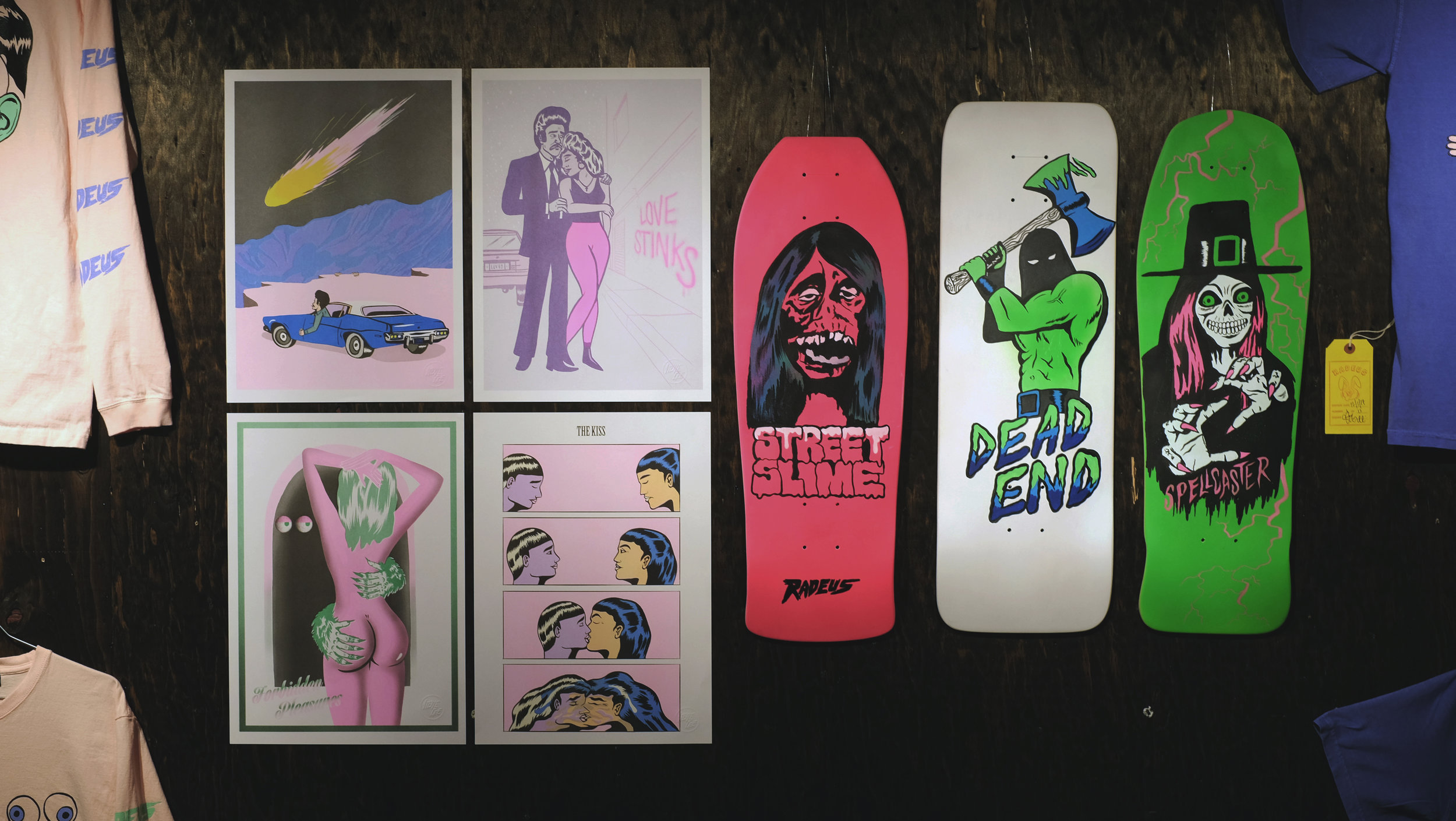 What is it about these (werewolf/biker/ghoul) characters that catches your attention. Why do they often appear in your work? And what do you get out of being influenced by these kinds of characters that you don’t get from other sources?

I guess you draw what you like, and I’ve always enjoyed a b-movie horror and old comic style and any wild and weird looking stuff. I don’t have any specific references that I draw from unless it is called for, like a portrait of a specific person for example. My characters are usually just from my imagination which is ultimately made up of influences and stuff I’ve seen and liked. Thats probably why they look so naive and wonky. Haha! 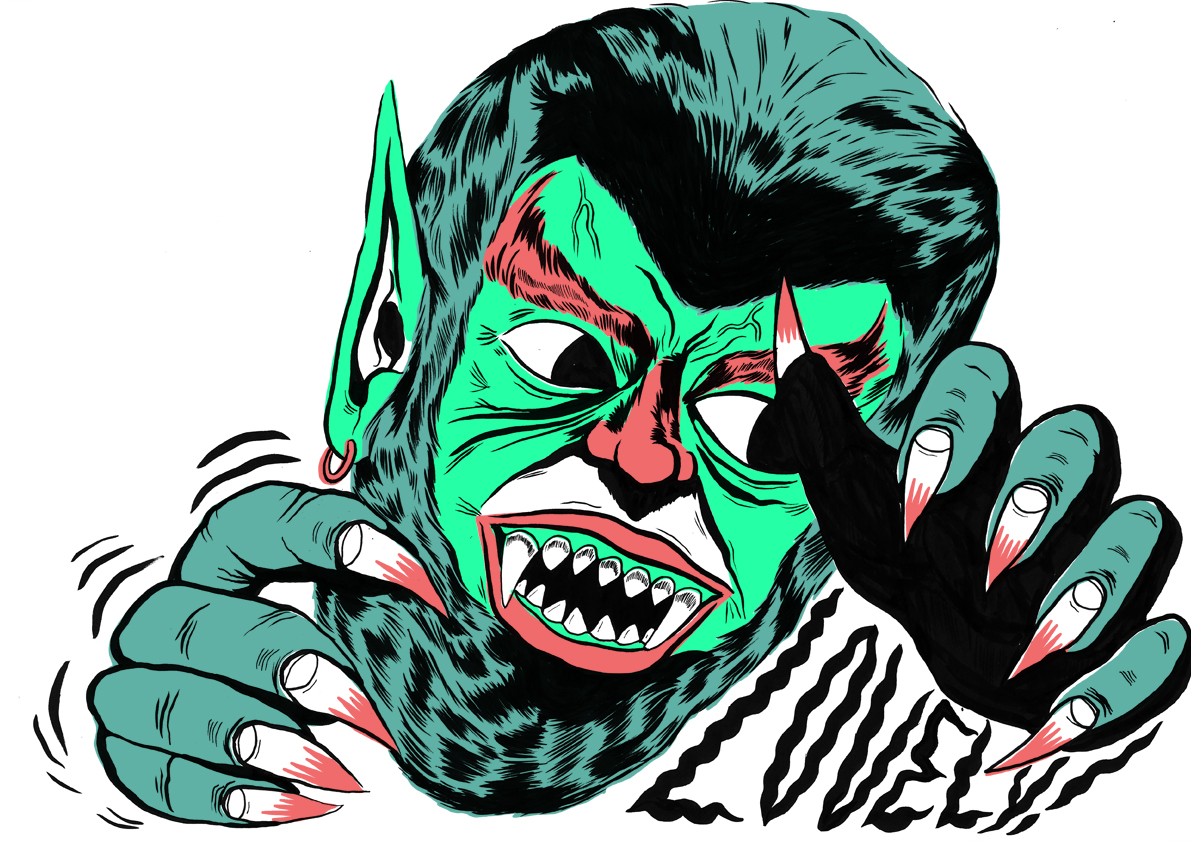 What future animations are you working on? Will we see a future collab with your children perhaps?

I have just finished some Nike World Cup animated Instagram stories for Raheem Sterling which I found fun, these were released in June. I am hopefully working an a series of animations for a charity (very soon) I can’t share any more yet but it will be really fun if it happens… plus its for a great cause. I have also written and just pitched a children’s cartoon idea that I am hoping might go somewhere one day. I feel it’s super hard to break into that world but that would be my absolute dream, to make a goofball cartoon show for kids.

I love working with my family, Essy and I are working on directing a live action/animation ad together at the moment. My daughter and I have done a short claymation about a snake going inside a mans mouth… that was so fun to do. I would love to do more of that with her for sure. Ever since I was kid myself, I have wanted to either make comics or cartoons. That would be the best if my cartoon dreams came true.