Illustrator and Animator Rune Fisker is a Copenhagen-based and Danish born designer, whose dynamic compositions and vivid colours caught the eye of the AOI team and led to an animated dialog for June’s Illustrator of the Month.

Rune has worked with many notable clients including Apple, The New Yorker, Wired, The Atlantic, Cartoon Network, and many more. His website bursts with confident story-led Illustrations, balancing commercial and advertising projects created personally or as a director of Animation studio Benny Box. Rune is further represented by Finnish Illustration Agency Agent Pekka in Helsinki.

We take a quick moment with Rune to understand the direction behind his dramatic imagery.. 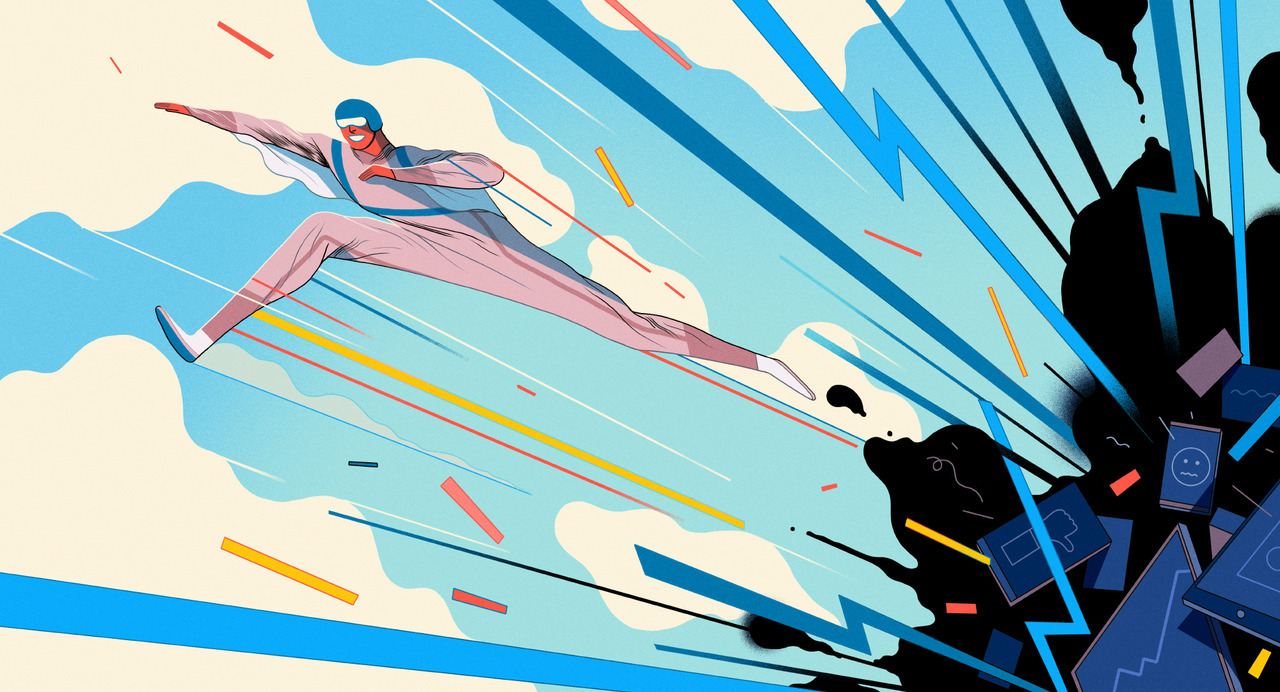 Your editorial Illustration for The Outline is very striking. How do you respond to editorial briefs similar to this? How much of a conversation do you have with your art directors?

For The Outline illustration the brief was very open, but it very much depends on the art director. Some have very specific ideas for the illustration, while some leave it totally up to me to come up with an idea or concept. I always start by making a lot of small thumbnail sketches, picking the strongest ones that I then develop further and send off to the commissioner. At this point the art director could request a new set of sketches, or suggest to make some changes that would make the illustration work better – sometimes it’s good to be pushed a bit in order to develop new imagery.

The Outline – The only job a robot wouldn’t do GIF

Integrated into your website is a confident and strong portfolio of self-initiated personal work, which emulates themes in your commercial and editorial projects. How did you develop this style?

Well, it’s not necessarily a conscious decision where you sit down and develop a style – it’s a constant ongoing process, where your aesthetic always evolves and changes. Sometimes you are in a place in your life where you (over a short period of time) evolve a lot creatively, or at other times it’s a slower process.

I’m actually inspired by photography, architecture, music, or my kids doing weird things, than illustrations these days – all these sights and sounds seep into your subconscious, and later pop up in my drawings. 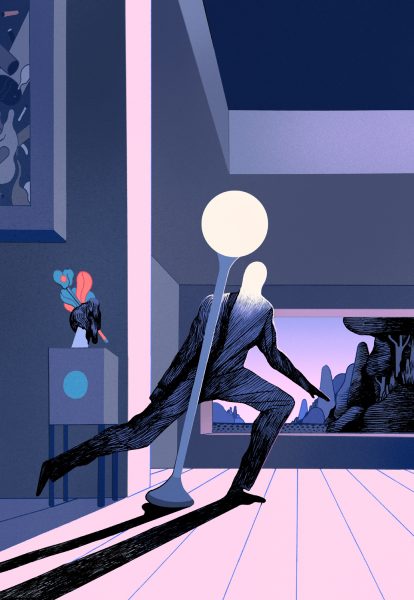 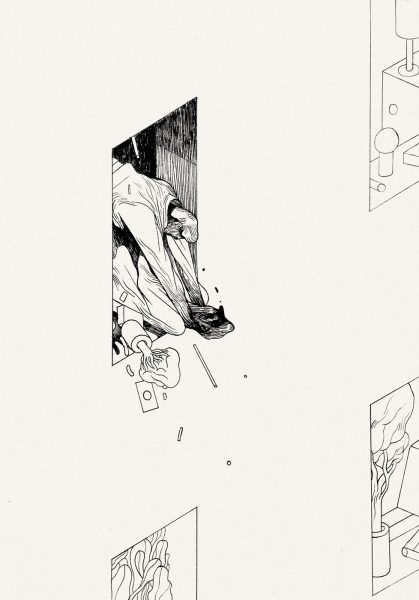 The movement in your images is captivating, effortlessly looping with simple and more complex motion. In the GIF Illustration for digital newspaper Zetland you create in Photoshop and animate in After Effects.

Can you walk us through the process of planning an animated illustration? What precautions do you have to take?

A lot more preparation goes into making an animated illustration. First of all you have to plan what parts of the illustration you want to move, and keep in mind that it has to loop; all of this has to be thought out in the sketch phase so you don’t end up with an illustration that looks good as a still but doesn’t work as a moving piece.

When you make a traditionally still illustration you can have a super big mess of digital layers without it being a problem. But with an animated illustration, there’s one more step after you have made illustration: making it move, so it’s important to have all the elements divided into a neat layer structure which you can then bring into After Effects.

You also create dynamic animation for advertising and TV with brother Esben Fisker under the name Benny Box. Can you give us insight into how the design studio flourished into a business?

We both went to the same design school at the same time, and before that we had both worked at various creative companies – so we were used to working together for quite a long time. It seemed like a no-brainer to create something together when we finished our education. In the beginning it was not a company, so much as two freelancers sitting in a very messy room occasionally fighting (we are brothers after all) and working together on various projects. But over the years Benny box has evolved into proper company with employees, a meeting room and boring spreadsheets.

What kind of things have you learned in Benny Box which influenced your own practice as a freelancer?

I think it has given me a very structured way of working. When you do animation there’s many people involved in the production, so you can’t sit and spend ages on getting that shading just right because there are animators sitting and waiting for your design before they can start animating. You have to be able to perform under very specific time constraints. 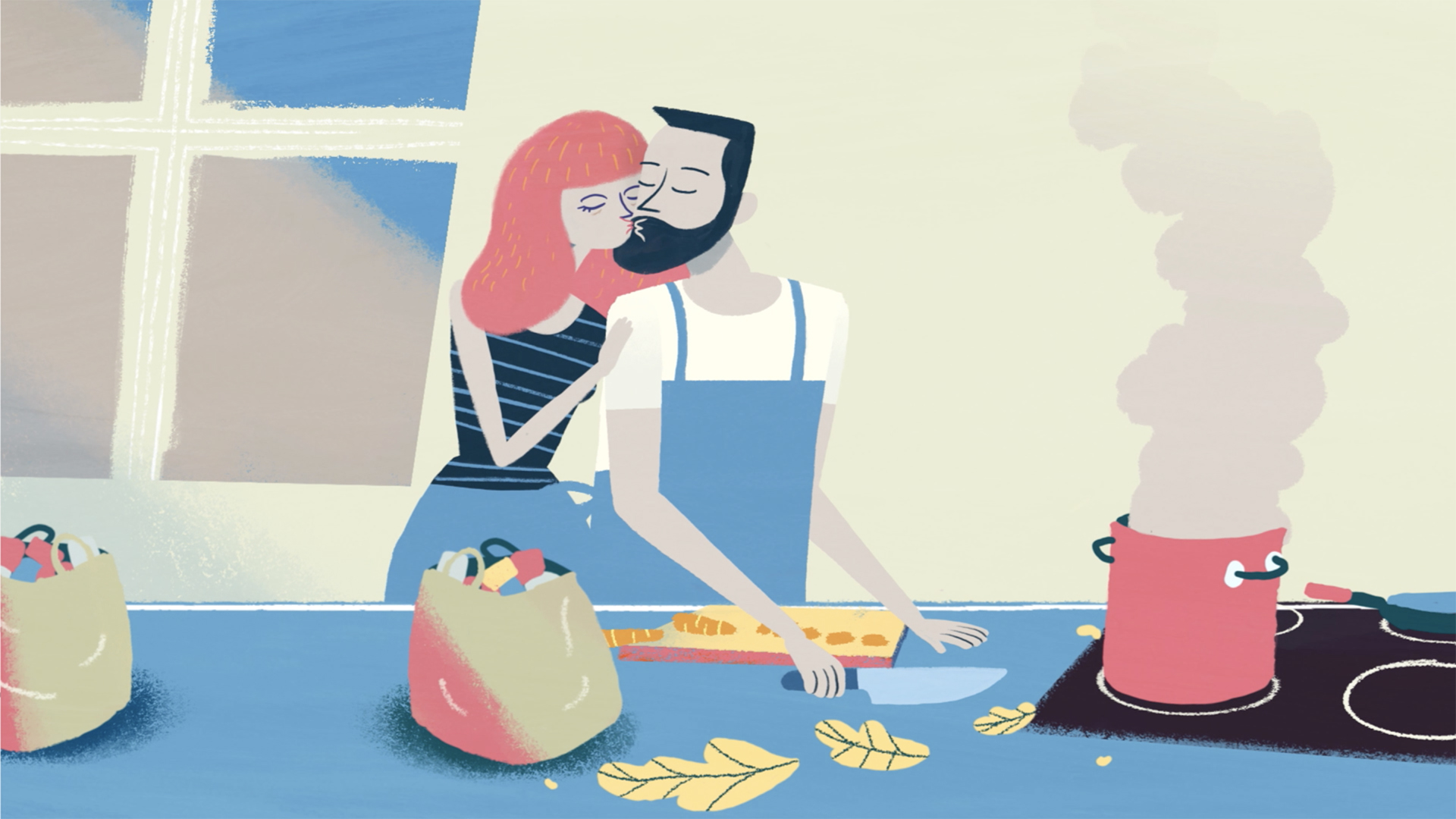 Aside from doing animation work with your brother, you also are represented by Agent Pekka for advertising projects. Do you feel that this relationship with both organisations gives you enough headspace and autonomy to work on different projects?

At the moment I think it gives me a good balance of different types of work, from editorial to advertising to animation jobs. And I can be a bit more choosy with what I say yes, instead of feeling pressured to take anything on. I can steer my career in the right direction, rather than desperately chasing the next job so I can get food on the table.

Illustrations for Adobe for their digital marketing website CMO.com

How do you see your Illustration practice developing further? Have you got any new/exciting projects you would like to talk about?

I would love to bring more motion and animation to my illustrations. Another thing I think could be interesting is doing some VR/AR stuff. I’m not exactly sure in what shape or form, but it’s something I would love to experiment with.

As for projects, at the moment I’m working with a great London-based advertising agency, and a very talented animation studio, creating a series of animations for a big international brand – but that’s unfortunately all I’m allowed to say at the moment! 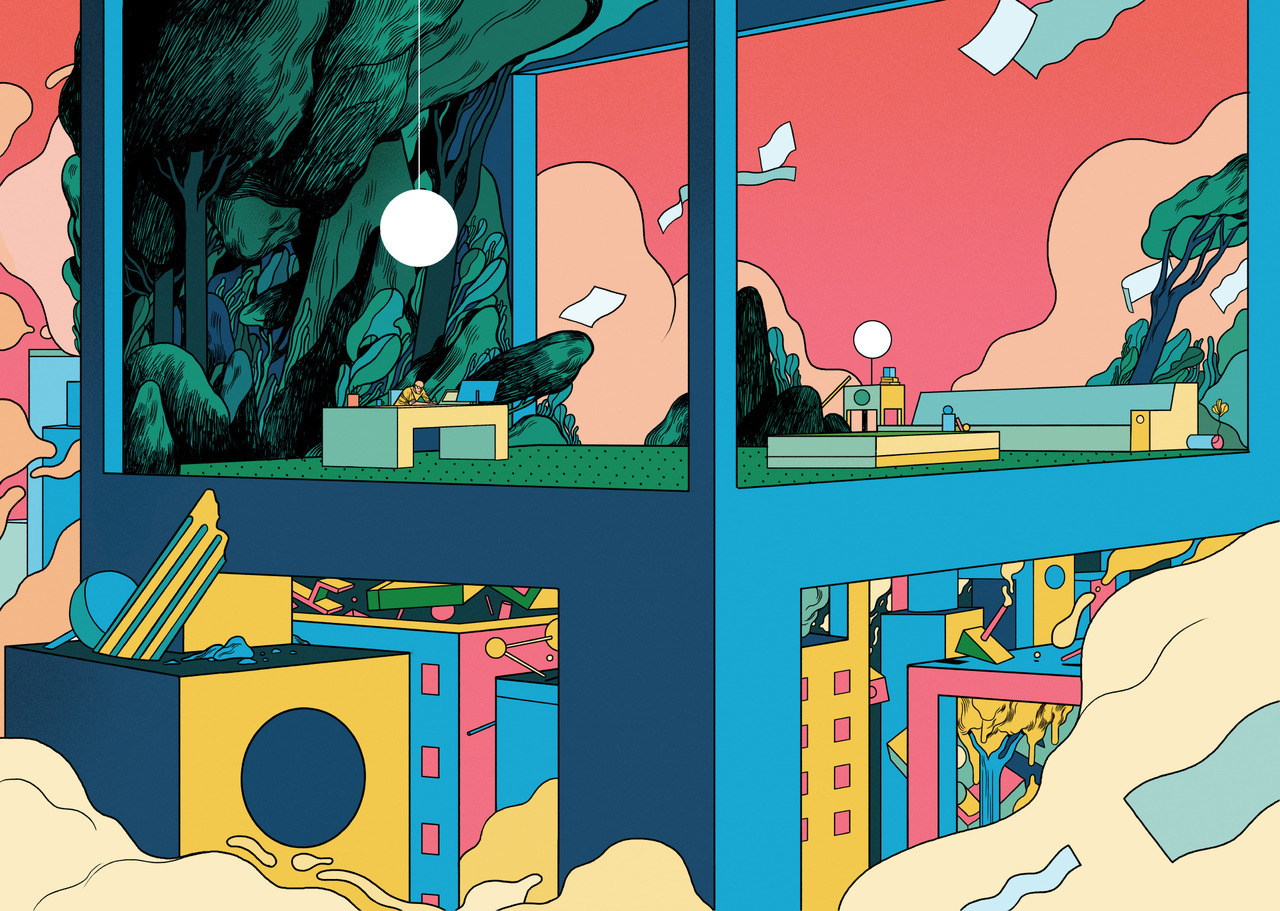