The Book Jackets of Edward Bawden 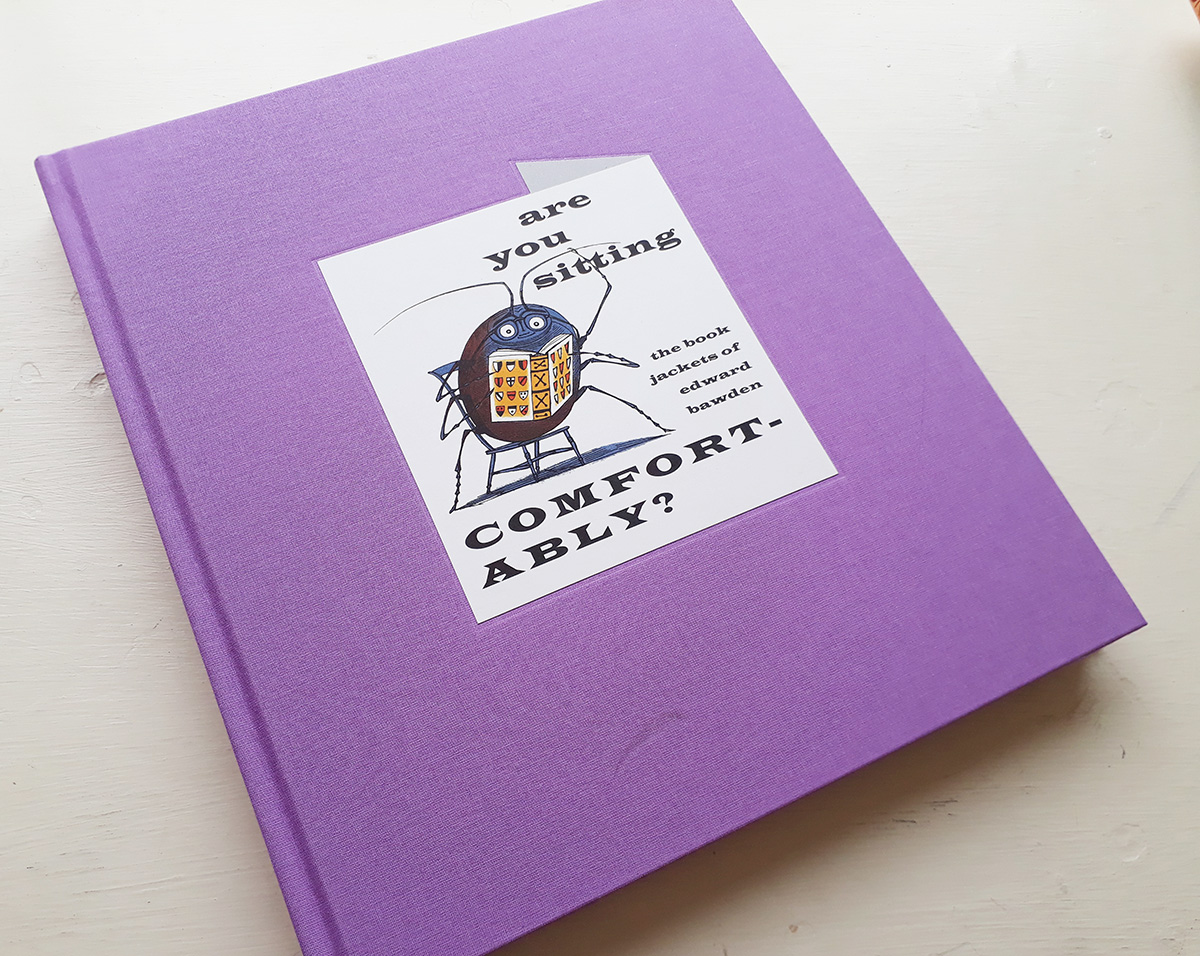 Are You Sitting Comfortably? – It’s the question you’re asked when getting settled in anticipating the enjoyment of something, and this title for a book of Edward Bawden jacket illustrations may be deliberately recognising the feeling of cosy nostalgia which much illustrative work from the mid Twentieth Century appears to bring to people. Which isn’t to denigrate the beautifuly drawn (or printed), occasionally quirky images taken from over 100 book commissions featured in this stylish, cloth bound publication. 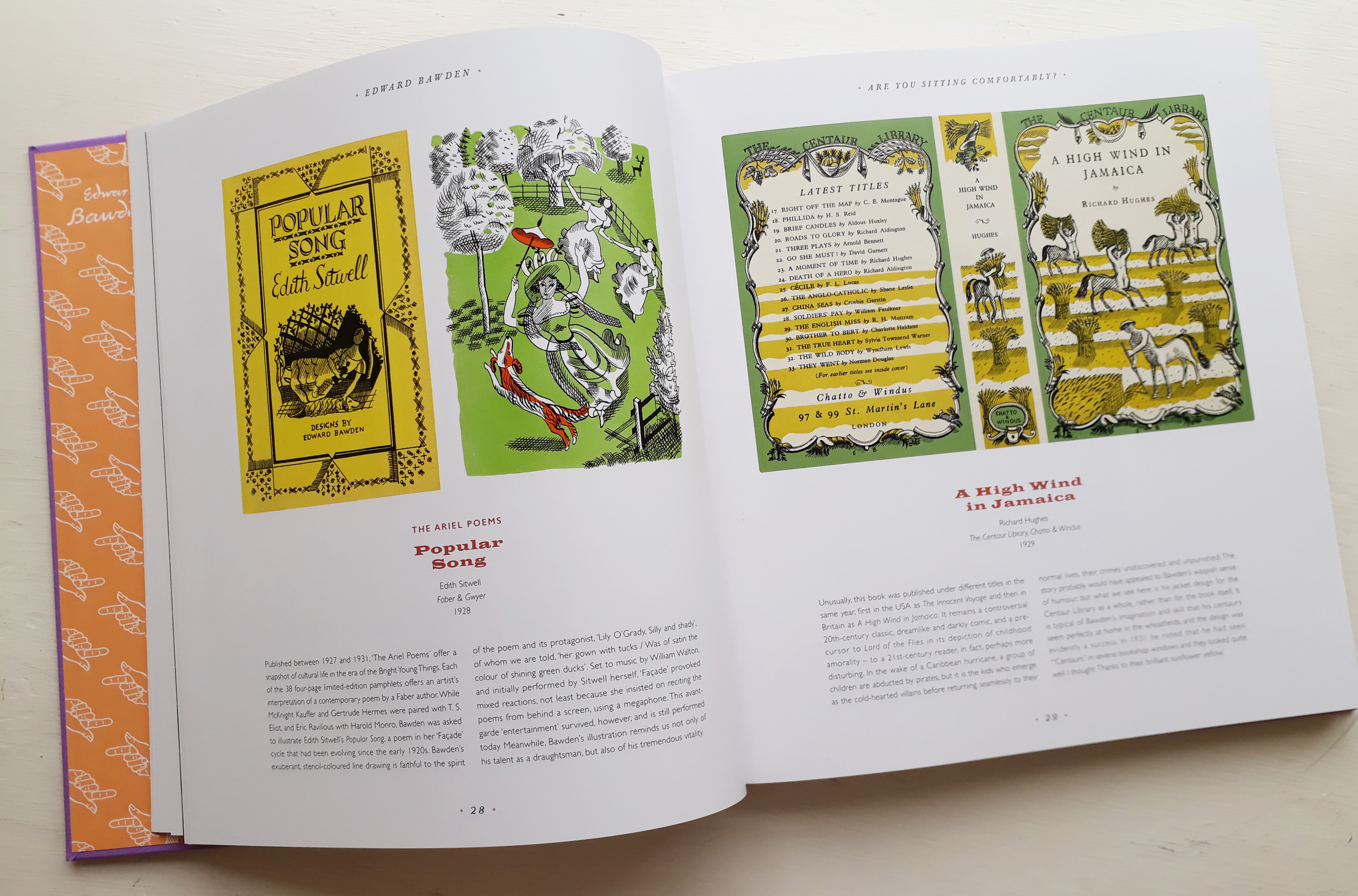 Riding a wave that builds on the growing interest on mid-century design and illustration, publication of this book coincides with current exhibitions on Bawden (1903–1989) and his contemporary Enid Marx at Dulwich Picture Gallery and House of Illustration. 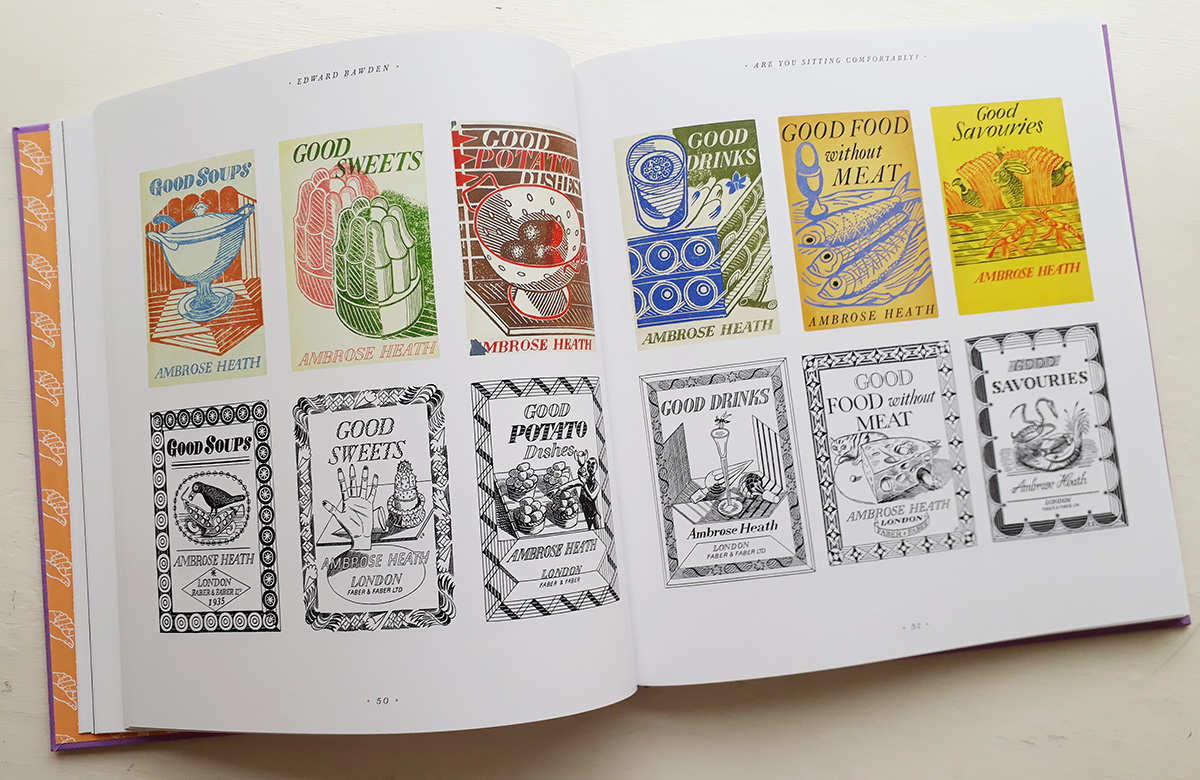 Although the book is great to just dip into, an introductory essay by Peyton Skipworth offers useful background, covering Bawden’s school days where his precocious talent was recognised, through his study of ‘industrial design’ at the Royal College of Art in the early 1920’s where he mastered line engraving and linocut, up to his later work for the Folio Society who commissioned him to illustrate Chronicles of King Arthur and The Hound of the Baskervilles in the late 1970’s. 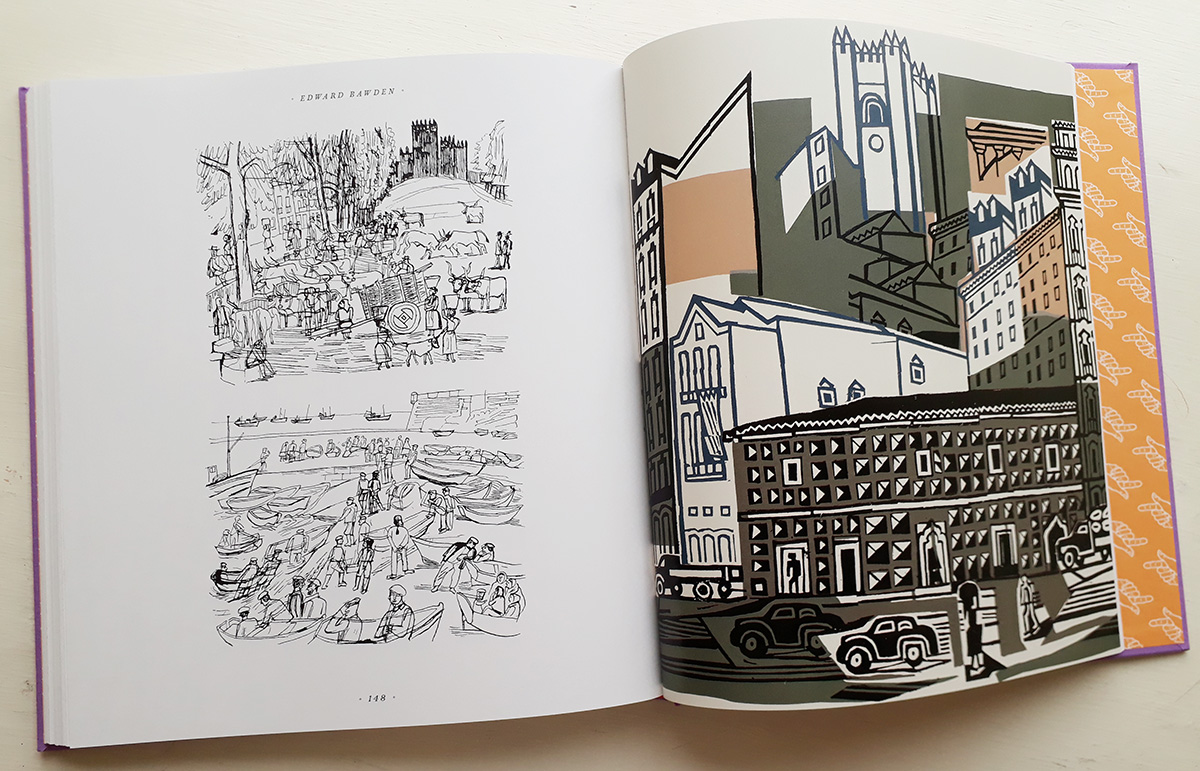 The two main sections cover book jackets from 1924-1940 and 1946-1985, the space in the middle being created by the interruption of World War II when Bawden was made an official war artist – his experiences darkening the humour in his work. Right from the 1920’s Bawden’s covers demonstrate an effective design sensibility with compositions that fill the covers, often as a border depicting elements of the story within. This is often coupled with hand rendered typography, combining image and text into a mutually complimentary style. 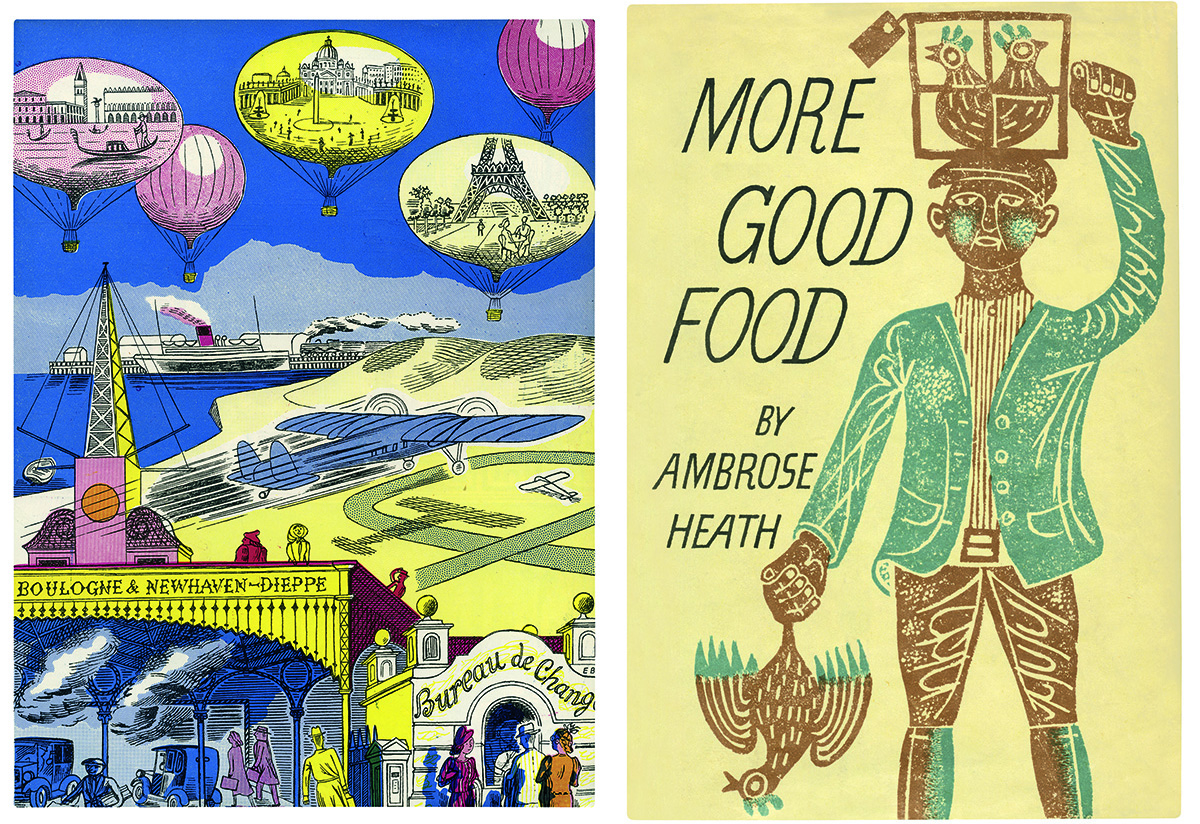 Some jacket artworks are created in beautifully observational line like The Gardener’s Diary, others such as the two-colour lino cut men on the cover of More Good Food, the chicken seller (above) and cabbage grower, are delightfully simplified. 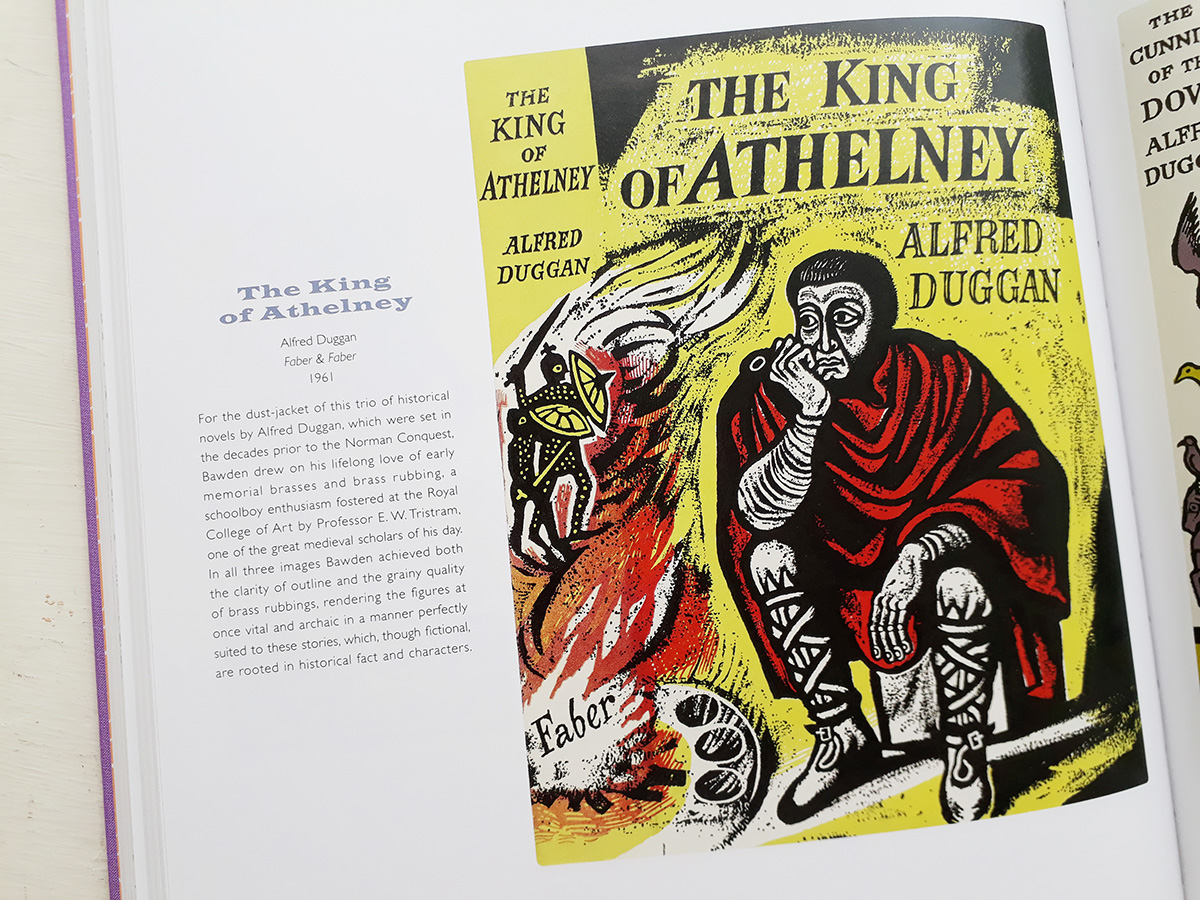 Each image is accompanied by text from James Russell, curator of the Dulwich Gallery exhibition, offering background information as well as comment on the artwork, considering the changes in Bawden’s artwork as the decades progress. This insight into the images adds a layer of appreciation of the works and their context.

As well as being great illustrations to view, these book illustrations are an inspiration for composition, the use of line and the sparing application of colour – sitting comfortably indeed.

For more on Edward Bawden see this review