Text by David Jenkins Illustrators below 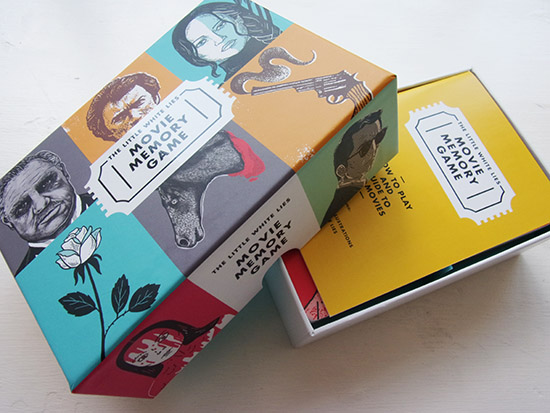 I don’t play many games but this one appealed to me because it is linked to one of my few obsessions, cinema. What exactly is in this box?

Nicely packaged with movie ticket stub containing the main typographic information on the top of the box. There is a little yellow booklet inside containing instructions on how to play the game and a guide to each of the films featured. The interior has a nice turquoise coloured divider for the cards. The design on the back of the cards is full of clichés – perhaps a more imaginative and contemporary approach would have been better. 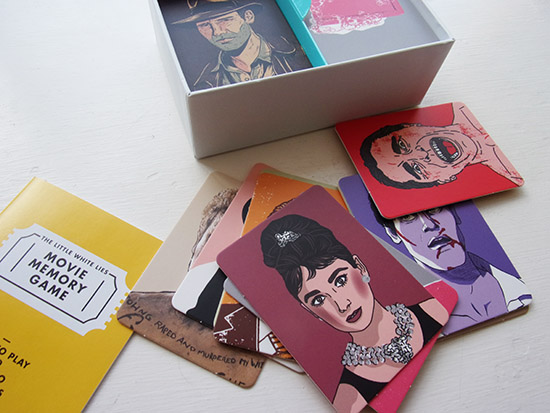 The game is obviously not aimed at children as some of the images are graphic in nature and some of the films referenced would be certified 15 or 18? Little White Lies, a popular art house magazine, is partly behind this game for lovers of film/cinema. The films depicted could be considered part of American cult cinema. Maybe there could have been a more global selection.

Work from nine artists is featured on the game cards:

So let’s get playing. Simple premise, but do you have to know the pairings before you can play? The pairings are colour coded, so even if you aren’t sure of the connections you can go by the colour of the background alone – clever. There are 52 cards, 26 showing a portrait of a film character and 26 showing a related prop.

I’m not satisfied by the illustrations in some cases. The ‘There Will Be Blood’ imagery was ill chosen. I had trouble reading the bowling pins and the bowling balls. Surely an oil well would be a more appropriate iconic image for this film. 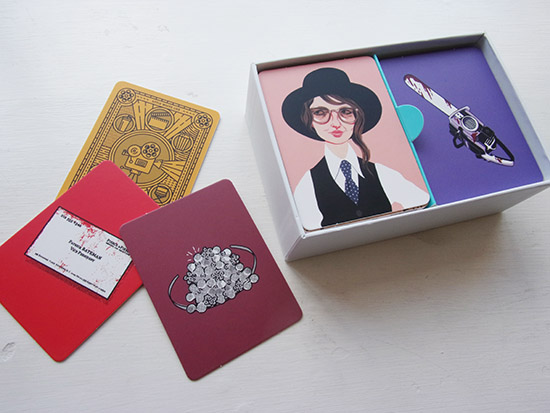 The portraits are interpretive so it is difficult at times to recognize the actor or character. In some cases there might be copyright issues linked to depicting stars of bygone eras that might explain this. Actors make their fortunes by being recognisable, perhaps some of the illustrators could have done more to achieve this.

I played the game once with a friend (an avid film buff). After completing it we both stated that it was a satisfying experience, but not one we’d be likely to repeat unless we could add something like a drinking game to the rules. That being said (and despite the adult content) I believe young adults would enjoy this game the most.