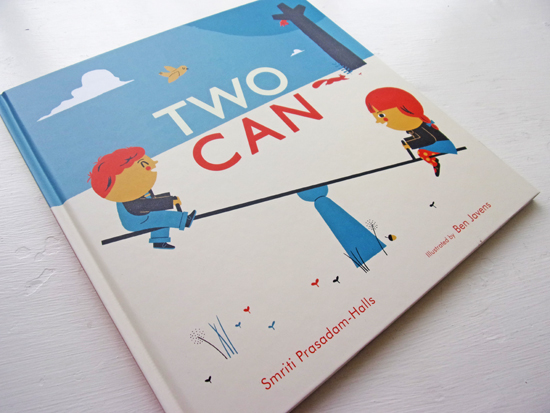 This story is situated in that place where many parents and young children spend a large part of their day, the park. Children can be seen playing on swings, the slide and in the sandpit. One little girl is playing by herself when another character (maybe her little brother) joins her, which as many parents will know, results in a rather intense ‘sharing situation’. 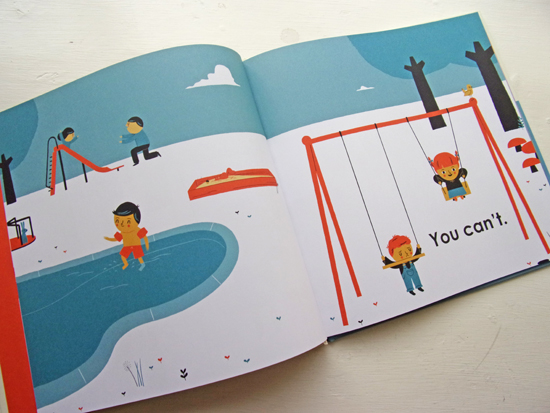 There are sub-narratives used here as in many good picture books, squirrels can be seen running around and the occasional rabbit pokes their head out of the ground, this received a very positive reaction from my own son! There is potential for readers to assume that due to the short sentences and bold shape-based illustrations, that this book is only for younger children. 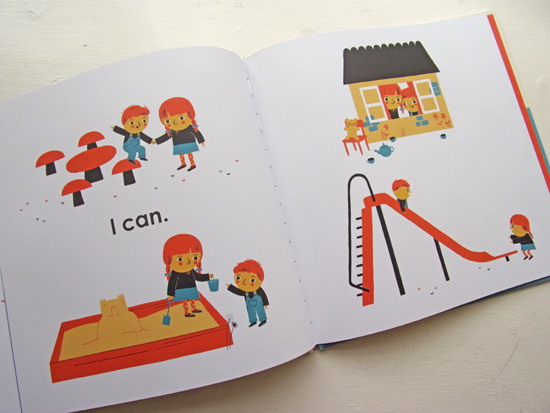 The text acts more like a commentary from the child’s perspective, possibly challenging a younger reader’s concentration skills. The themes that are explored here are complex. Not only are the subjects of sharing and friendship introduced and questioned but also the nuance of language. ‘One can’, ‘You can’t, ‘We can’, these statements provoke a discussion between readers (which may well be a parent and child) as many of the pages seem to demand further explanation of why characters are saying the things they are and acting in that manner. Javens’ illustrations certainly help to explain the emotions of the characters when making and hearing these statements. The little girl looking glum when sat alone on the seesaw, seems to be at the point when she realises that ‘One can’t’ play on some toys by yourself. She starts to play with other children (just as they have been doing throughout the book) and her mood visibly improves.