News / What Do Grown-Ups Do All Day? – book review

Illustrated and written by Virginie Morgand 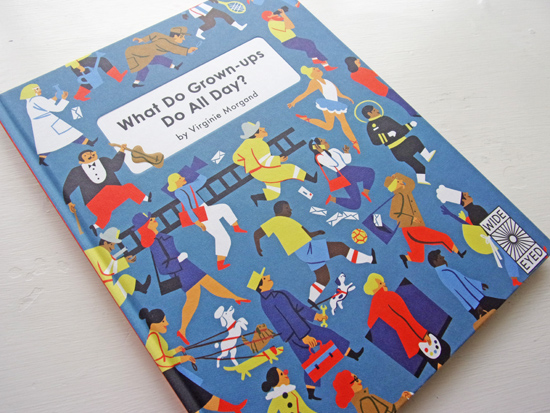 The cover shows a debossed oblong with the title and author’s name, and the blue field of the cover is populated by 25 plus figures all travelling from left to right, as if to suggest we are all going somewhere. Where? Work, that’s where.

There is no story, instead the focus is on a series of locations populated by working people and then the specific roles performed by these people in those locations. It gives us a sense of the wealth of activities that are possible in the world of grown ups. The Illustrations work as spreads showing the location first then followed by a spread highlighting the roles of the individuals who are featured in the previous location. The useful book structure allows the reader to dip in or go straight to locations of most interest. Contents pages and index help with this orientation. In a nod to Martin Hanford’s Where’s Wally/Waldo? there is the added game of can you spot the performer of each job. This is a great way to engage early readers. 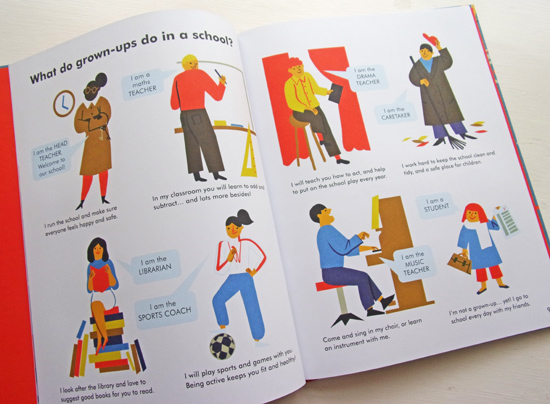 The individuals featured in the book are diverse and the gender roles assigned are progressive. There are North American sensibilities in the use of language for job titles, which will be intentional for an international market.

The book is aimed at children aged five plus, but it should also appeal to older students due to its visual sophistication. There is a good balance of text to image ratio that allows the illustrations to breath in the space. Nice to see the text is set in Futura, my favourite sans serif typeface, perfect for reading aloud and legible for those who might struggle with reading. The prose doesn’t rhyme, which is a good thing, but it does have a rhythm that aids reading aloud and is easy for children to memorise with its tuneful pacing.

The illustrations are based on the screen-printing process, but are in fact constructed through digital means. The matt printing on uncoated paper adds to the handmade screen print feel, however in some cases the dark skinned characters facial expressions are hard to read. The colours are subtle with just enough primaries on show to reflect the intended audience for this book. The illustrations are indebted to the work of Miroslav Sasek from the covers of his famous This is… book series. Even though the images are more geometric and closer to textile designs the energy and boldness reminds me of the work in Katherina Manolessou’s book T-Veg. 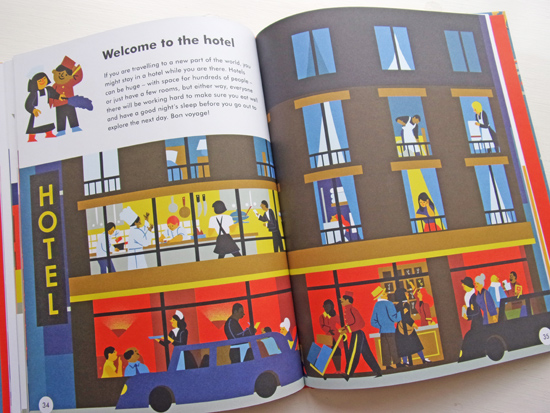 Locations are well represented with a farm, construction site, gym, action jobs pages and the great outdoors (this works as two locations, on the left page the seaside and on the right page the mountains. Cutaways work well and add something to the concept allowing the reader to explore and find the action within the illustrations. Repeated viewing is rewarded as further details and mastery in the use of colour are revealed. 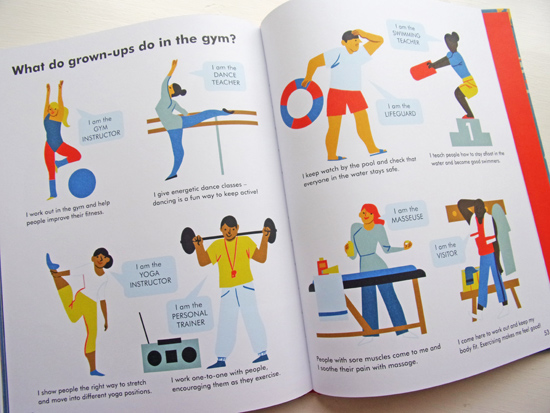 Author Virginie Morgand has used the large format well, creating busy energetic images that are carefully controlled to communicate her intended message. This is to show the vast array of careers that adults are engaged in and the appeal of this to the imagination of young minds. Some locations, the school, the shops, will be familiar to children, but this book opens up spaces that usually remain hidden, such as action packed jobs, the news room and the great outdoors. The simplicity of the figures combined with the accuracy of major elements are charming and appealing, as they are unambiguous. This makes the images very relatable and memorable. This book will delight parents and children alike. It has a collectible value and would work well as part of a larger series of fun but informative titles.

T-Veg: The Tale of a Carrot Crunching Dinosaur