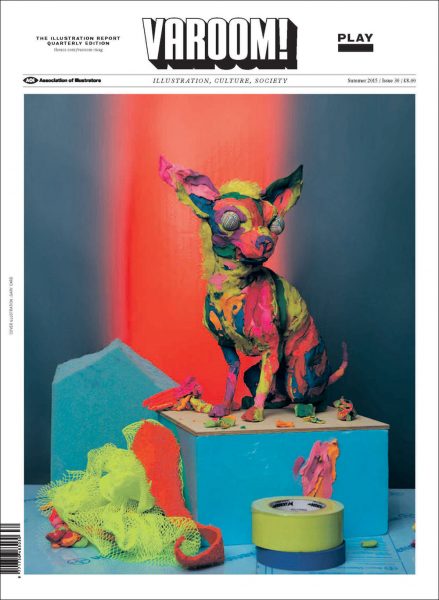 Game For A Laugh

The gaming industry potentially offers a high score for illustrators. John Sharp, the author of Works of Game: On the Aesthetics of Games and Art, discusses what illustrators might learn from games, communities of practice and more. Brenda Romero’s Train is shown along with the visually rich Proteus and The Witness.

With the help from Nicholas Ricketts (The National Museum of Play’s collections curator), we were able to explore the archive of the world’s most extensive collections of toys, board games, video games etc. Find out cultural and social stories behind some of the more unusual games in their collection, including one on queuing for goods in pre-1989 Poland.

Playing With Space: The Image of Theatre of Russell Mills

Rick Poynor examines the benchmark body of work in the history of illustration through Russell Mills and how he addressed cultural and social ideas within a commercial context in the late 1970’s and early 1980’s. “I don’t believe there’s any distinction between painting, illustration or sculpture,” Mills said in 1983.

From headpieces for Lady Gaga to bizarre covers for Kafka novels, Gary Card’s image making travels in many different directions. Zoe Taylor’s interview with Card reveals an illustrators alert to the possibilities of improvisation. “I want to startle people,” says Card.

Also in Varoom 30, Andrezej Klimowski reviews the newly published version of Julian Tuwim’s ‘Locomotive’, the famous Polish children’s book. Varoom have a Q&A with illustrator Steven Guarnaccia on his three dimensional exhibition, Fatherland, who then picked out illustrator Richard Mcguire and his new playful graphic novel Here. Both discuss the process of Play in work. Also, Zoe Taylor interviews Chinese fashion illustrator, Jiiakuann about play in her mesmerising characters and illustrations.

Varoom 30 is available from good book stores and the AOI Shop. 64 pages of great images and insightful comment. Get Playing.