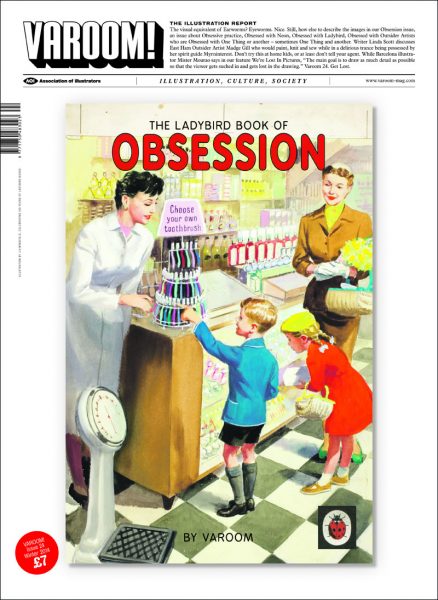 What makes Obsession, so… Obsessive?

Writer Linda Scott observes that East Ham Outsider Artist Madge Gill would paint, knit and sew while in a delirious trance, whilst in possession of her spirit guide Myrninterest. Don’t try this at home kids. While Barcelona illustrator Mr Mourao says in our feature We’re Lost In Pictures, “The main goal is to draw as much detail as possible so that the viewer gets sucked in and gets lost in the drawing.” Varoom 24. Get Lost.

For a generation of middle-aged adults, the lushly illustrated world of Ladybird brought education, the rush of collecting, and a utopian vision of middle-class life. Author of a forthcoming book celebrating Ladybird’s 100 years in 2015, Lawrence Zeegen unpacks the emotional, cultural and iconic power of a unique slice of visual history.

Outsider Art is slowly becoming Insider Art, as its raw mark-making and unedited practices make it attractive to viewers and illustrators looking to escape from blog-driven tyranny of style. Illustrator and educator, Linda Scott, traces a fascinating genealogy of a genre blending the psychologically, visually and politically unsettling, with the inspiration that originates in empathy with the truly strange. Artists, Bill Traylor, Adolf Wölfli, Henry Darger and Madge Gill are discussed alongside contemporary illustrators Carolyn Gowdy, Jeff Fisher and Marcel Dzama.

For many illustrators and designers, music is the oxygen of creativity. Shane RJ Walter explores the relationship between image and sound in the work of the late, legendary Run Wrake, whose music obsession generated a unique visual language of ‘pop’.

We’re Lost In Pictures… there’s no turning back

For image-makers, Obsession is about getting lost in the work. It’s about making something to get lost in, a labyrinth of creativity. Inspired by the work of psychoanalyst Adam Phillips, Sharon Bowes explores the labyrinthine worlds of Ed Loftus, CatherIne Anyango, Peter QuInnell, Kanitta Meechubot and Mister Mourao

Obsessed by the light of history: Cold War Neon

This is the story of how a little known aspect of Cold War culture became an obsession for designer David Hill and photographer Ilona Karwinska. A personal journey into the history of Neon signage in Poland lead to an ongoing conservation project now housed in Warsaw’s Neon Muzeum.

The Birth of Obsession

In the age before the internet, the rich visuals and drawings of comics were the portal to lost hours of looking, reading and escape to a different place and time. Ian Horton explains the origins of his collection of The Victor, and his passion for illustrators like Anthony Coleman, Harry Farrugia and Peter Sutherland.

Portraits… and The Wall Street Journal

Noli Novak has been drawing what are known as ‘Hedcuts’ for The Wall Street Journal since 1987. Novak reveals the inside story on an illustration technique that is the signature of one of the world’s oldest newspapers

Regular columnist, Paul Davis, describes an ‘obsessive compulsive’ morning involving the best way to make coffee, the creators of HB pencils and moving to Germany. And Marian Bantjes’ complex and fascinating centerspread image becomes cuter the closer you peer into it.

In Motion, Cyriak Harris describes his found footage video for Bonobo as, “vast repeating mechanism that the cam-era slowly scrolls across. It is a machine whose purpose is to create itself, much like the western capitalist society glorified in the original footage.”

In Cartoons, Martin Colyer discovers The Witchfinder’s Guide, a subject rarely explored by cartoonists, but here amusingly created as “the hook on which we were hanging explorations of sexism, bigotry, hypocrisy and religious myopia,” explains cartoonist Simon Myerick-Jones.

For Fashion, Frida Wannerberger’s “strange and other worldly” characters are chosen by Ligaya Salazar for their deep engagement with narrative. Frida’s project for the Isabella Blow exhibition at Somerset House, London consists of an alphabet of Isabella’s famous hats.

The haunting sketches of Charles Shearer are featured in Jane Stanton’s Reportage section. “They have formed a visual library of my life,” he says of the many books he has drawn in.

In ‘I Wish I’d Done This, celebrated illustrator Olaf Hajek selects the apparently simple artwork of Phillipe Weisbecker. “How is someone able to create work like a child, but with such sophistication and intelligence?” comments Olaf.

Varoom 24 is available from the AOI shop. 64 pages of great images and insightful comment. Get Obsessed.