We are delighted to announce that The Poster Prize for Illustration 2019: London Stories exhibition opens with a bang on Friday 8 February 2019 at the London Transport Museum (LTM)

A new exhibition featuring 100 illustrations opens on 8 February and celebrates one of the world’s greatest cities – London and reveals some of the fascinating tales of London life past and present.

From urban myths, historic events and remarkable characters, to daily lives and adventurous animals, the exhibition offers new perspectives and insights into the cultural history and heritage of London. London Stories reveals the wealth of real and fictional tales and events inspired by, or having taken place in, London and embraces the quirky, amusing and bizarre as well as the day to day aspects of life in the capital.

Some of the illustrated stories include the Cross Bones Graveyard, a ghost bus, St Pineapple’s Cathedral, the Faceless Woman of Becontree, and the baffling story of an intrepid rabbit travelling alone on the London Underground. From Tottenham Marshes and Tooting Lido to Kew Gardens and the Empire Windrush arriving at Tilbury Docks, the exhibition is inspirational for both the savviest of Londoners and those wanting to learn more about the real and fictitious stories and events that give London its identity.

The competition was open to illustrators throughout the world. Artists were invited to create an illustration that visually captures a well-known or obscure London narrative; stories that are contemporary or historical, real or imagined. Over 1,500 illustrations were submitted by professionals and students. The London Stories exhibition will showcase 100 of the best which were chosen by an independent panel of judges made up of experts from the art and design world.

The winner will receive £2,000 and their illustration will be displayed on London Underground as a poster. The Silver and Bronze prizes are £1,000 and £750. For the first time ever there will be a fourth prize which will be chosen through a public vote. The winning illustration will be permanently accessioned into London Transport Museum’s collection.

Organised by London Transport Museum in partnership with the Association of Illustrators (AOI), each illustration is accompanied by a short text written by the artists summarising the inspiration behind their creation.

The Poster Prize for Illustration continues Transport for London’s legacy of design that dates back over 100 years. London Transport Museum’s collection of graphic art is one of the best in the world and includes over 5,000 posters and artworks by famous artists including Man Ray, Edward McKnight Kauffer, Dora Batty, Paul Nash and Enid Marx, London Stories closes on 14 July 2019.

A series of events will happen alongside the exhibition. More information here: ltmuseum.co.uk 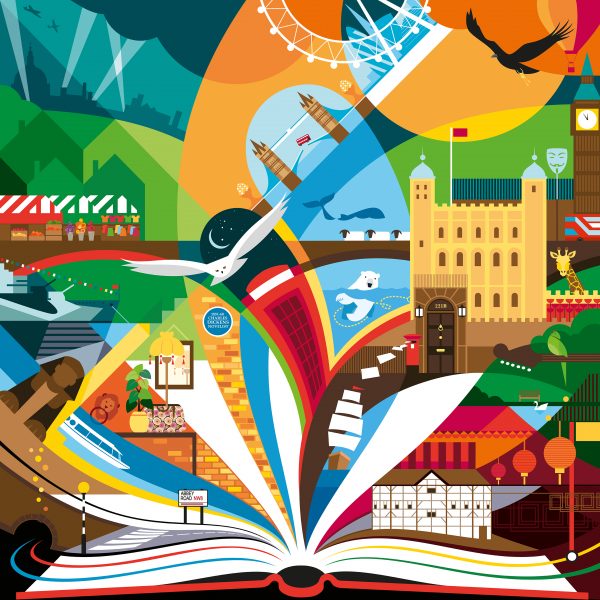