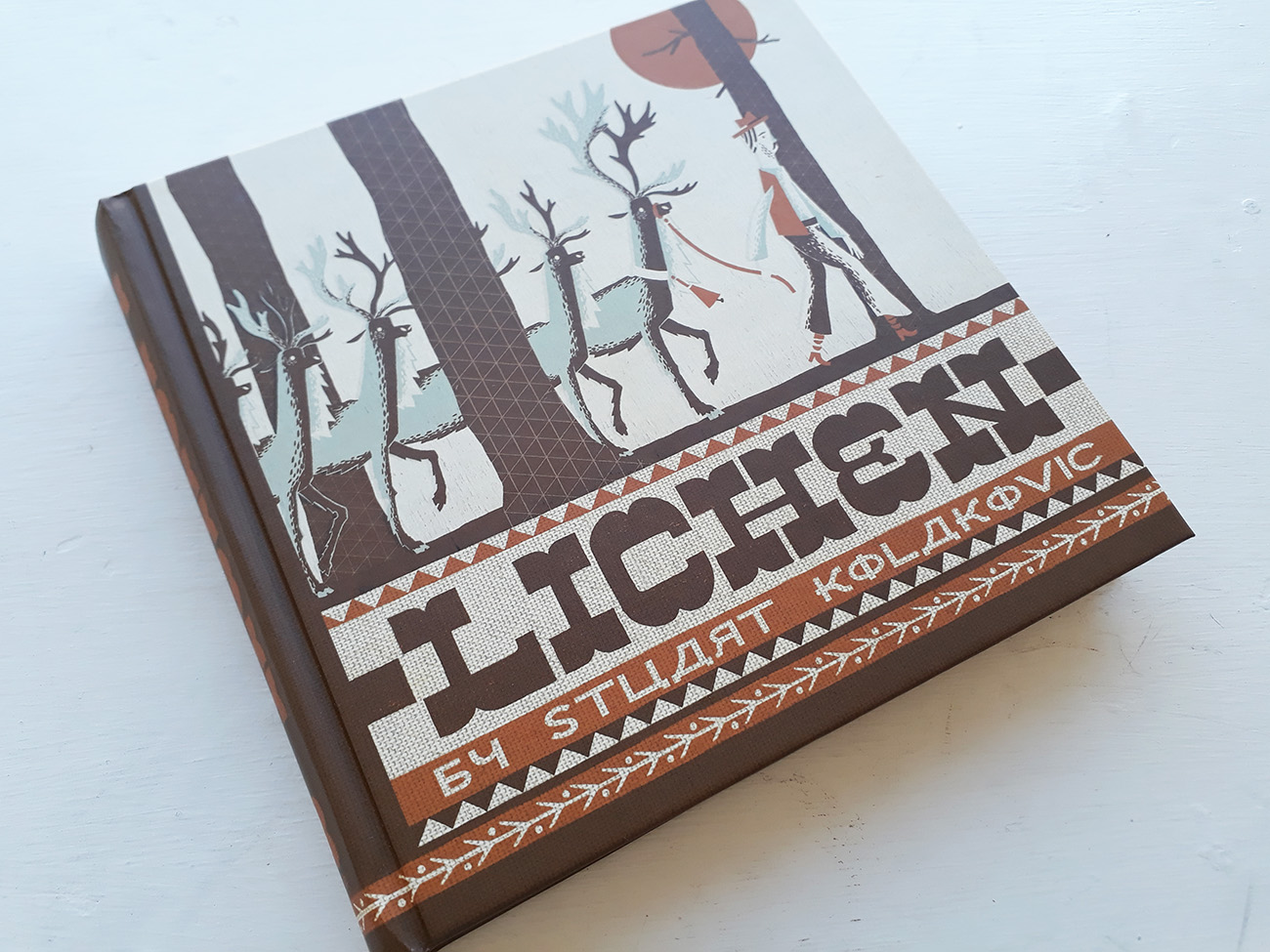 At the start of Lichen a formation of birds fly over an island, alerting the graphic novel’s silent hero that it’s the autumn season and time to lead his herd of reindeer through the shallow sea to the mainland. It’s the start of a long journey to the city. But there may be adventures and danger along the way. 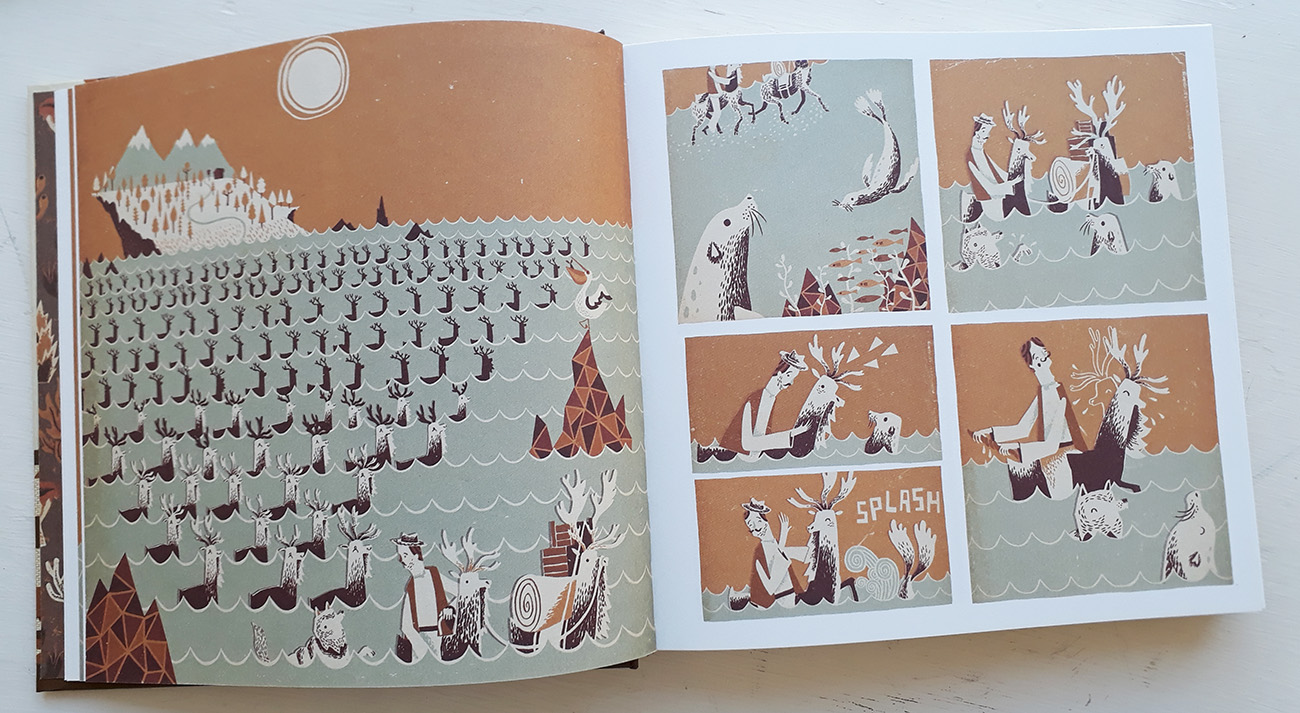 Packing his bear talisman in a special box, the herdsman sets off on his trip, little knowing it will also involve a snipey sprite, a vicious one eyed bear and a mysterious woman. But before these characters appear, the man, his dog and a large herd of reindeer trek off into the wild, taking the long route that allows his deer to eat a special lichen along the way – hence the book’s name. Various woodland animals meet sticky ends to feed the travellers in Kolakovic’s typically unsentimental way, and when a huge bear attacks one of the deer he gets an arrow in his eye from the herdsman. 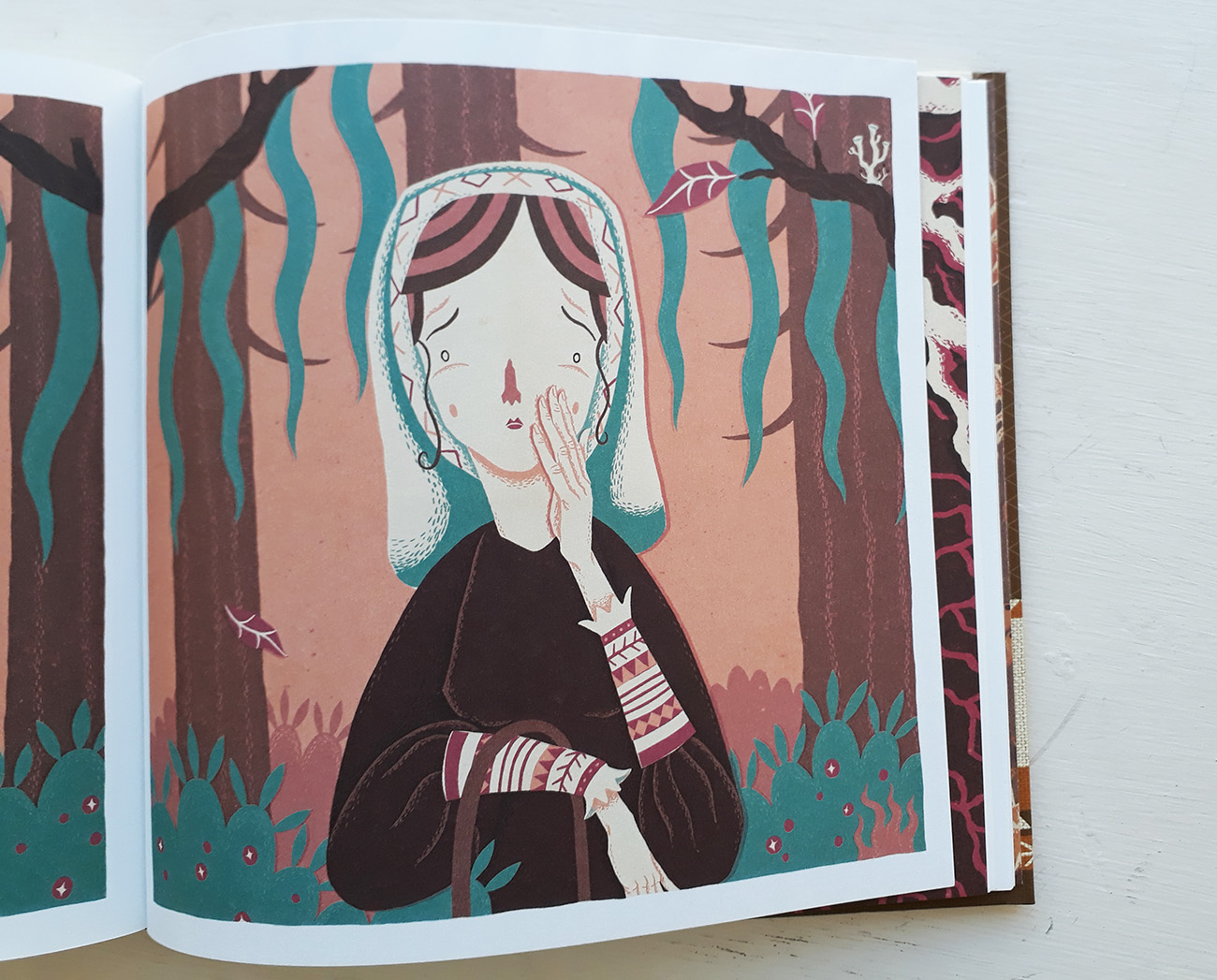 At one stop-off point while bathing in a lake, the herdsman spots a woman by the shore, but he’s too shy to approach her. He carves another talisman of her to join the one of a bear in his box. Is there a connection between her and the giant bear that may now be following them? The herdsman’s worship of the bear figure opens up possibilities of a world connected in unusual ways. 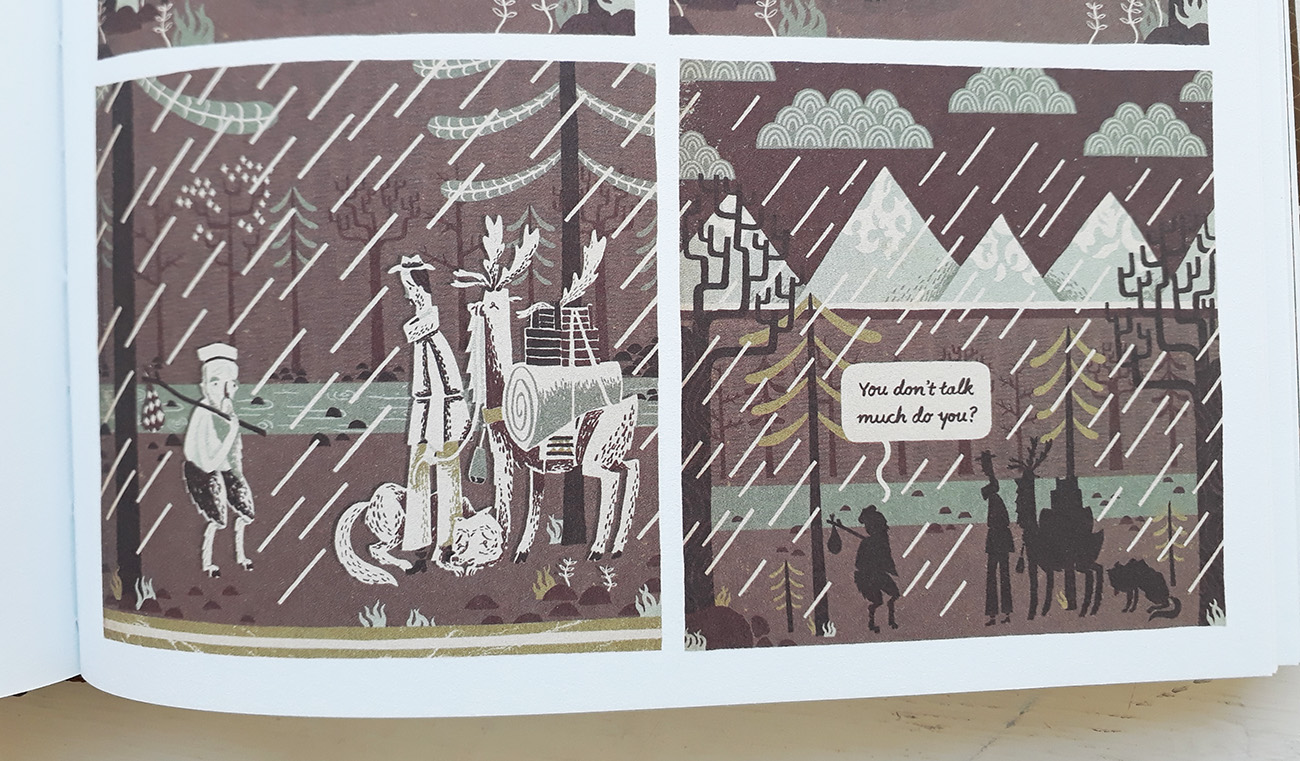 Along the journey he meets an old bearded wood sprite, and having offered him food, the sprite wants to grant him a wish. But the taciturn hero – ‘the quiet type, aren’t you?’ – supplies no such wish. Unable to grant the wish and therefore having to follow the herdsman the sprite becomes one part of this surprisingly humourous duo – a cranky, chatty sprite and the silent, irritated herdsman. I loved the dialogue Kolakovic gives the sprite, building on the folk-evoking imagery with a cheeky contemporary attitude. 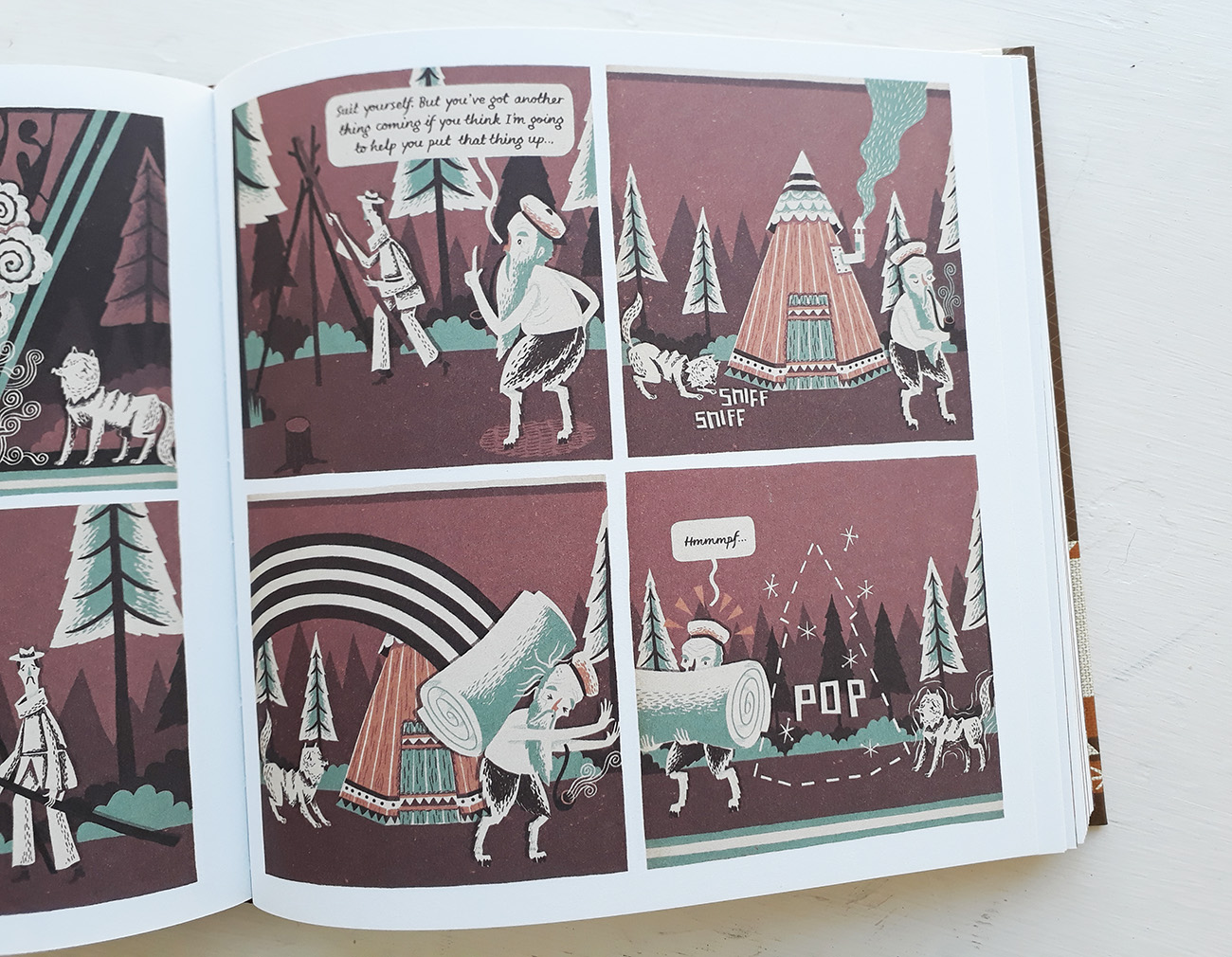 As the story progresses the reader starts to wonder, will the hero’s love of the briefly-seen woman be his undoing? And will he succumb to the sprite’s insistence that he is given a wish to grant?

Eight panels across each spread in a palette of muted colours give space for the story to unfold, and occasional double page images bring a dramatic focus to the scene. Kolavitch creates depth with expansive landscapes along with pleasing details, while also evoking a broad-ranging world containing characters who strive to survive while dealing with their confusing emotions. 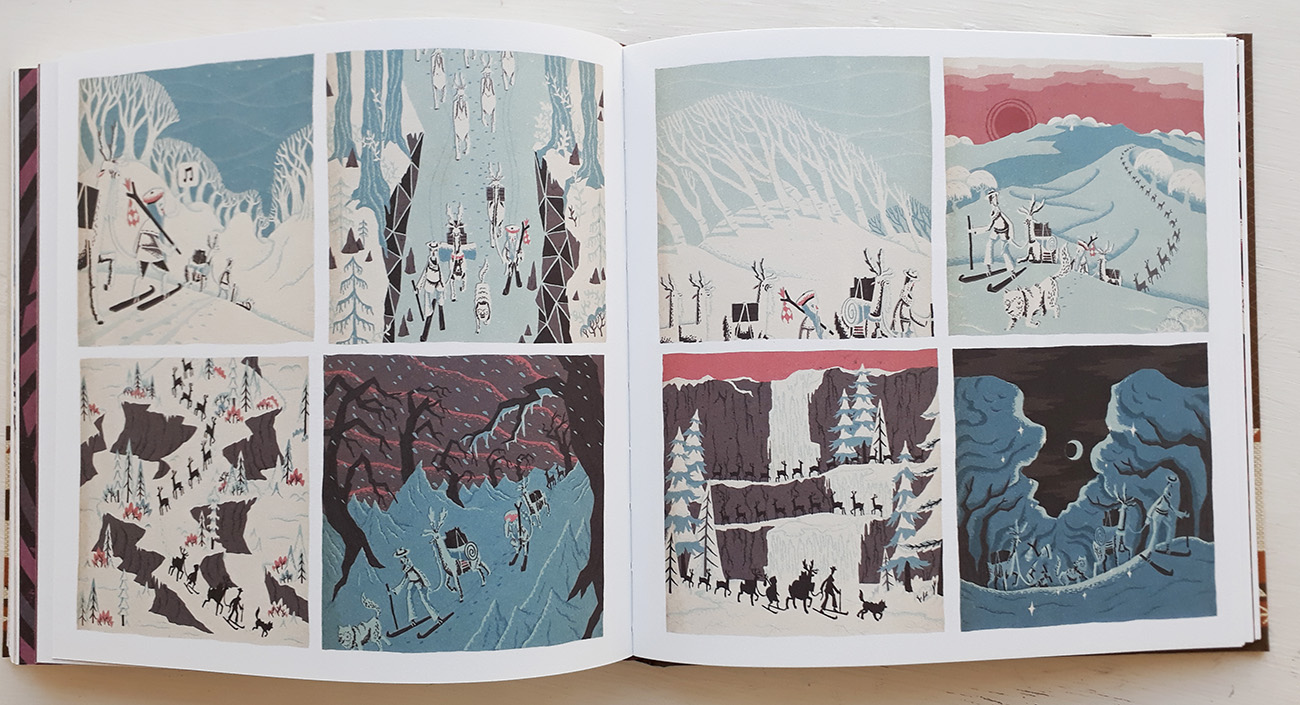 Lichen is an affecting tale of the need for companionship and the effects of holding on to unfulfilled desires and nebulous beliefs. And why to get thinking carefully if you’re offered a single wish from a wood sprite! 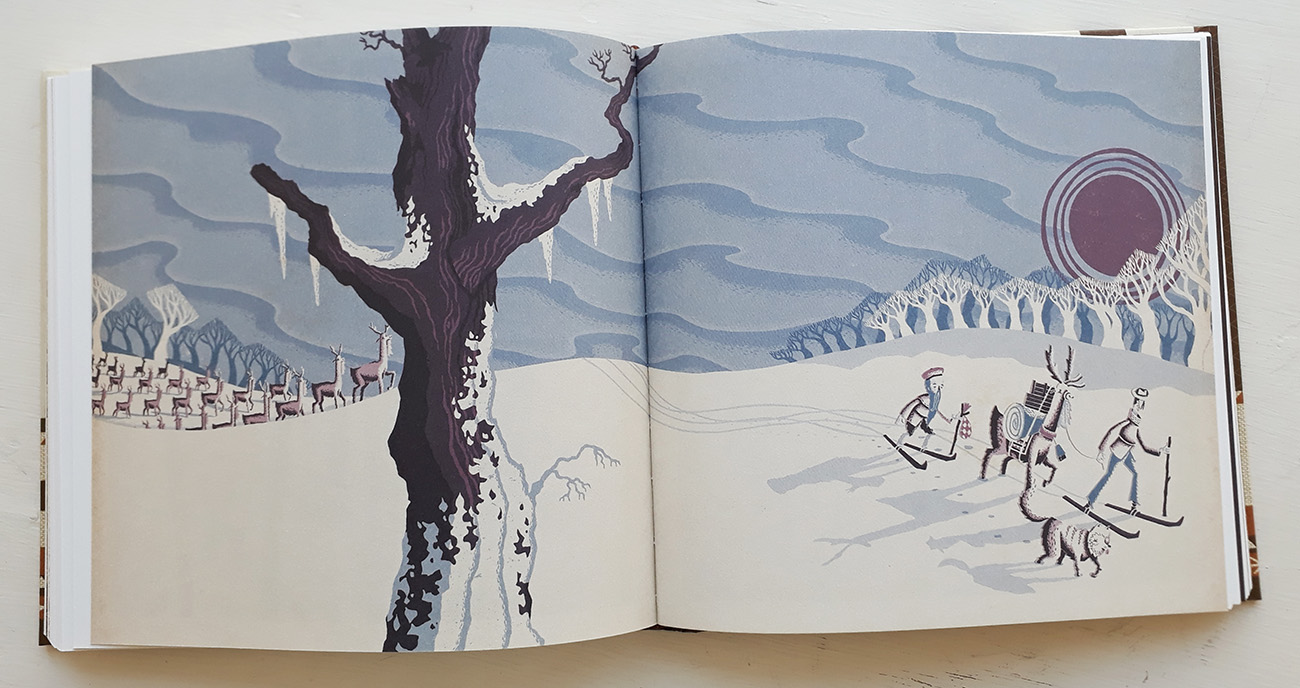