We are delighted to share with you the winner of the London Stories exhibition public vote.

For the first time the public has voted for their favourite artwork in the celebrated Poster Prize for Illustration exhibition at London Transport Museum, crowning Chloe Isteed’s painting depicting a classic red Routemaster bus leaping across Tower Bridge as their top pick.

Inspired by true events, the winning artwork entitled ‘Mind the Gap No. 78’ illustrates the story of heroic London bus driver, Albert Gunter. In 1952, upon realising Tower Bridge was suddenly being raised, Albert bravely hit the accelerator to jump the gap and land his bus safely on the other side.

Isteed used painted strips of paper in her collage and acrylic illustration to add an extra dimension and depth to the original artwork. 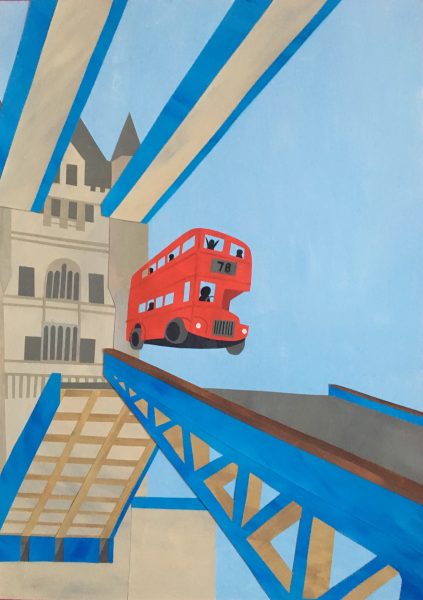 Artists and illustrators worldwide were invited to respond to the theme of ‘London Stories’ to create illustrations that visually capture a well-known or obscure London narrative.

Over 1,500 entries were submitted, portraying stories that ranged from anecdotal urban myths to grand tales of historic legend, from the everyday to the curious and from the past to the present.
100 of the best were chosen by an independent panel of judges made up of experts from the art and design industry. These can be seen on display in the Exterion Media Gallery at London Transport Museum in Covent Garden until 14 July 2019. Remember you have one free entry plus an adult guest. Your names are on the desk. Kids go free.

The public vote was new to the Poster Prize for Illustration competition and exhibition this year, giving visitors the opportunity to see the artwork they loved the most become a permanent part of London Transport Museum’s collection.

Chloe Isteed said: “I am really pleased that people responded so well to my work. I enjoyed making the image and telling a story that not many people had heard of before. Thank you to London Transport Museum, theAssociation of Illustrators and everyone who voted.”

Jason Cotterrell, COO of Global’s Outdoor division (formerly Exterion Media), and one of the judges, said: “London has long been a source of creative inspiration, and the judging panel were blown away by how artists interpreted this year’s brief to create compelling illustrations that capture people’s attention both as works of art and posters. Crowned the public’s favourite, Chloe Isteed’s artwork beautifully captures a rare and surprising moment in the Capital’s history. It will be a fantastic addition to London Transport Museum’s world-class collection of graphic poster art.”