Illustration is a perfect medium from bringing a historical story to life, and recognising this the Royal Airforce approached Middlesex University to collaborate with their museum at Hendon airfield to produce an online interactive graphic novel relating the history of the airfield from the early 1900’s to the present day.

Eleven illustration students and graduates from the AOI member University were picked to work on the collection of short stories over a two year period, supported by university staff, exploring events on and around the site from the grassed airfield of the London Aerodrome, through the years of RAF Hendon, to the current day Grahame Park housing estate and the RAF Museum. The final result is beautifully executed and makes the most of the opportunity to explore the structure of the storytelling.

‘Each of the students was given specific year as the basis for their stories,’ says tutor/illustrator Alex Moore,’These would then explore certain functions or aspects of the Hendon site’s 100-year history such as the protocol for pilot training or the role of WAFFs. Others dealt with specific moments, such as the delivery of the first airmail or, as in my case, Ray Holmes’ extraordinary performance during the Battle of Britain.’

Events also covered include the young women in 1919 loosing their important war time jobs as men return from the front, and the young men invalided out of the RAF re-applying for flying jobs at the base in 1946.

We spoke to several of the illustrators who took part about the project and section they were allocated in the timeline, the research they undertook, and how they presented the narrative of their story.

To read each story simply follow the direction of the narrative and click on the RAF logo to return to the landing page.

My brief mentioned a plane pageant in 1930s, and I was encouraged to show the entertainment of the pageants and the amount of people who would show up for the air displays. Since I have a great interest in history, and especially social relations in history, I thought it an amazing chance to discover more information about the people of England in that period. I’m interested in class, race and sexuality representation, so it was amazing to read about life of women and people of colour in London during this decade. 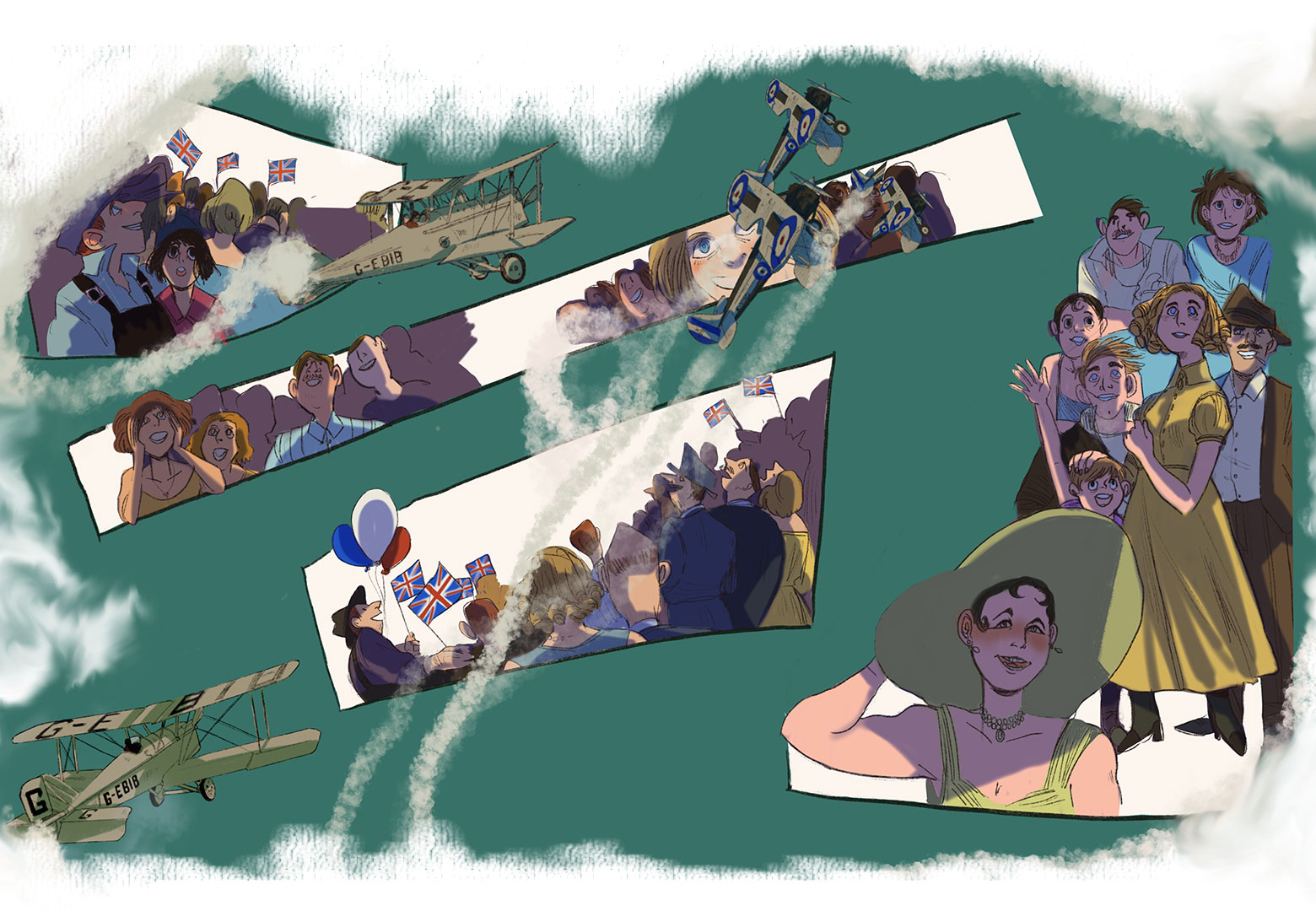 Apart from having help from RAF experts and access to the archives, I’ve used several books on these subjects for research, and then obviously borrowed some books from Middlesex University library on fashion of the period. The biggest challenge was to find clothing style for working class – upper class fashion was easily found in books on fashion, with catalogue pages of old fashion magazines, but not so much on everyday clothes of working class.

My initial idea was to show all groups in society of the time, but upon reading a lot about the treatment of veterans of the First World War, I decided to focus on that in the final version of the story, opposing the loneliness of a veteran ostracised by society with amazement and joy of an air display.

We spent the better part of the planning and drafting process working hard on presenting the subject in visually interesting and gripping way, that at the same time would be clear to read and easy to navigate on every platform. It was definitely a challenge! Personally, I had to re-do the story few times in order to make it a bit simpler in terms of narration and visual cues. It definitely helped to make it visually more interesting by adding movement-looped GIFs as part of the illustration. 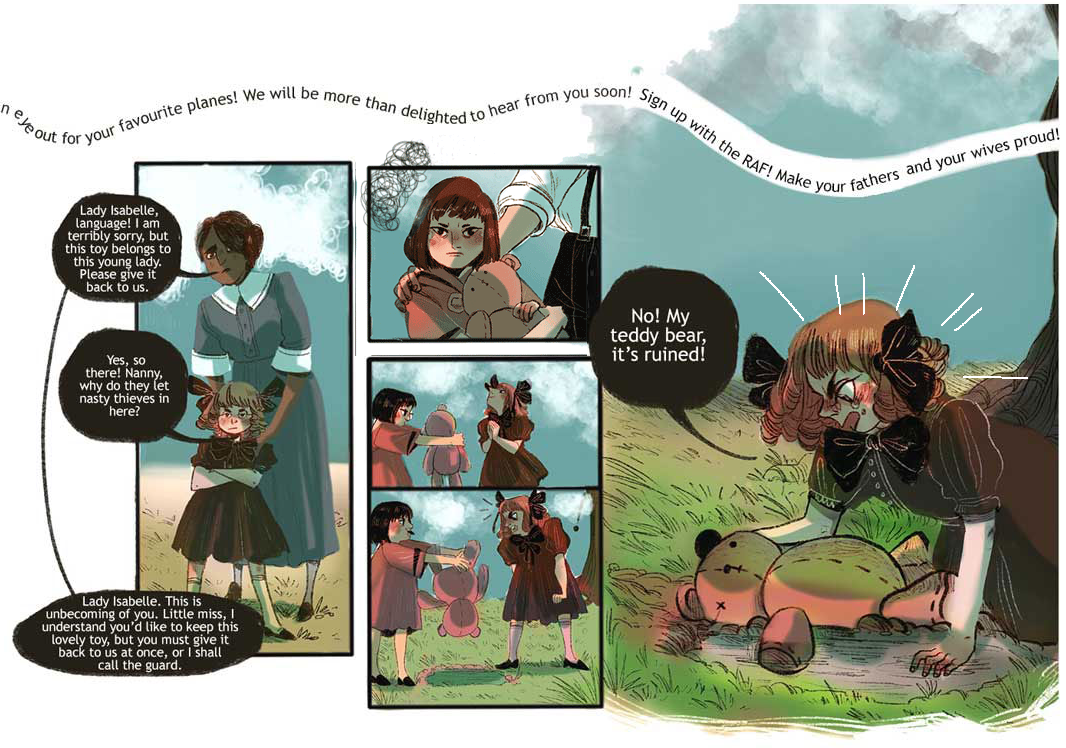 Working on this project was super interesting, and helped me develop as a visual storyteller, for sure! I love doing thorough research for my work, so having to reach into RAF vast archives for photos of relevant machines used during that decade’s air displays was great fun. I don’t think I had ever drawn planes to such an extend before, so that was definitely a welcomed challenge! As for the positive feedback, I must say that casually name-dropping RAF Hendon as one of my clients did help me to open few doors and cause some jaw dropping…

The story I was allocated was Ray Holmes’ extraordinary performance during the Battle of Britain. Research was a very important part of the project and a big emphasis was placed on historical accuracy. I was able to find multiple accounts of the event, including newspaper reports that specifically documented his flight. As well as this, Holmes had also published an autobiography, which was incredibly handy!

As this project was going to live online we were really keen to use this opportunity to take full advantage of the format. Unlike physical comics there’s no limit to page dimensions and that allows for you to do some really exciting things with story telling pacing opportunities. With the rise of motion graphics and GIFs we were also eager to incorporate these as well, thinking about how these could be used to add to the atmosphere of the story.

I really enjoyed working on this project. Playing with layouts in order tell a narritive in the most impactful way possible is one of the things I love most about making comics. I’d previously explored this in a free-form animated sequential sequence for my final project at uni so it was really great to go back and revisit this concept. I think I also lucked out with the story I was allocated as there was so much to get my teeth into. I’m amazed that I’d never heard of Ray Holmes before, as it’s an unbelievable story.

I think the project as a whole is really impressive body of work. I’m incredibly proud to have played a role in both producing and creating work for the project- especially given the quality of everyone’s work.

My story was about the training routine of Leonard H. Rochford set in October of 1915, the second year of the First World War. We had to be very accurate about the details so research was essential to create the images and also feedback during our meetings with Joe from the RAF team. Some of the imagery I did was drawn from reference, as I wanted to add a realistic touch to the representation of the pilot and his routine. I was provided with some images of the aerodrome and its surroundings, also some detailed descriptions of the routine and training from “I chose the sky” which were very helpful to set the scenes. The rest of the information and imagery about transport, clothing, furniture and day to day objects existed at that time period I found on the internet. 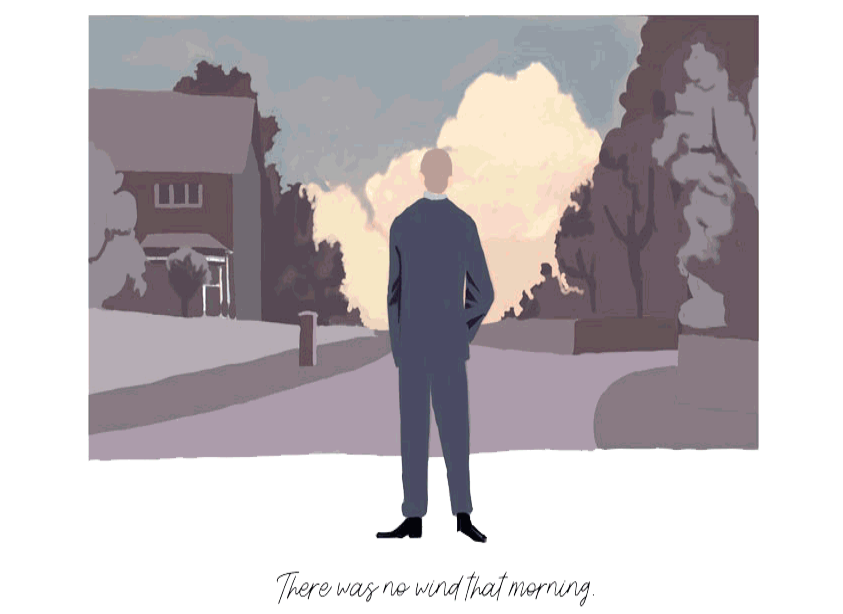 When we were briefed, the stories were meant to be animated and uploaded on a web page. We had to keep in mind slight movement that we could add to the images that we were creating, learning how to create GIFs, and the “scroll” feature to navigate through the page.

I decided to go for a straight strip format that only requires to scroll down through the web page to read it rather than taking it to other directions, I thought it would make it more simple and intuitive to the reader. 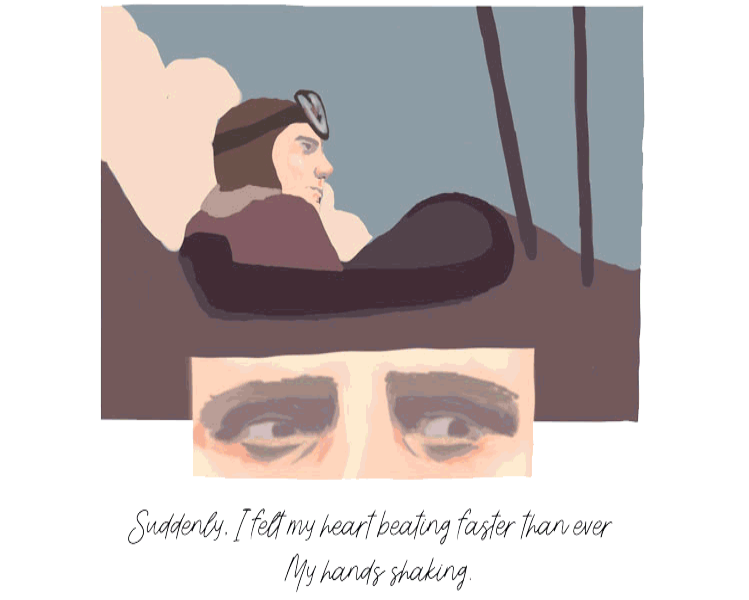 Creating this graphic novel was challenging, which is good, because as mentioned previously it appeared in a new and interesting format to me. We had to learn to work in different formats and undertake accurate research. But at the same time it was rewarding too, it was the first time I was ever commissioned and also the first time something I worked on has been featured on a website, and I was very excited about it and pleased to hear positive feedback.

Although we researched our allocated year individually, sometimes it was helpful to pool together images and notes we had found for a certain era. It can be a little difficult to find the exact reference you needed to draw certain scenes, a lot of web searching and trips to the library to make sure the drawings were accurate and factual. We were lucky to be given books from the RAF museum, which were really handy. I depicted the story of one of the women who contributed to the war effort but who lost their jobs when the soldiers returned. 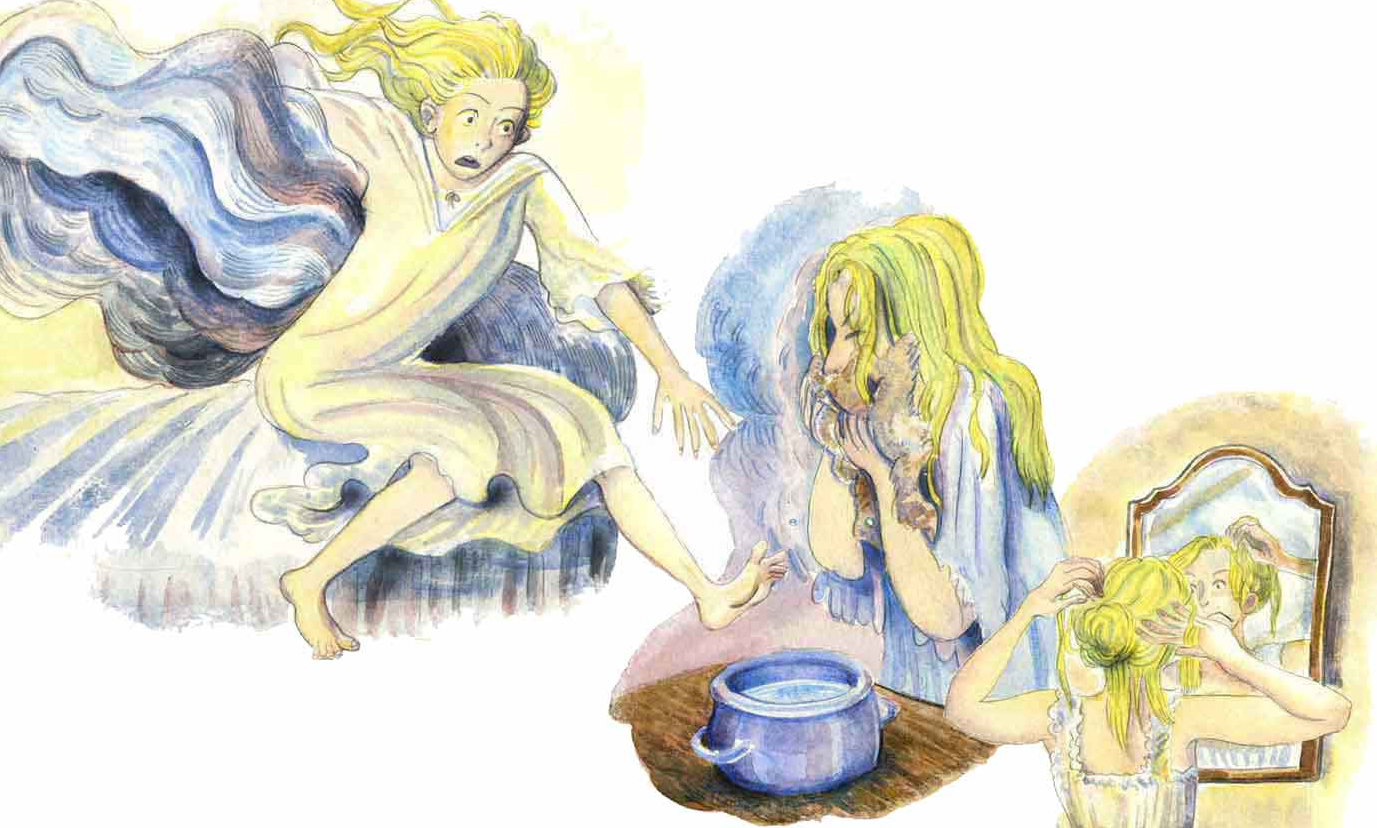 The task of creating the format was one of the most challenging parts of the project but also the most fun. Because it wasnt in a traditional comic strip, we could really explore the movement and pacing of our stories. When drawing flying planes, it is invigorating for the drawings to be out of a box and take on an infinite space. It has helped me think of new ways for my stories to be visually told, a rewarding experience.

At the launch event at the museum, a woman who specialised in the first world war gave me really nice feedback, saying she thought the web comic had captured the atmosphere and all the detail of the time. It was such a relief to hear that. It was also my first time creating gifs. I would say this project has taught me a lot and was one of the best experiences so far. 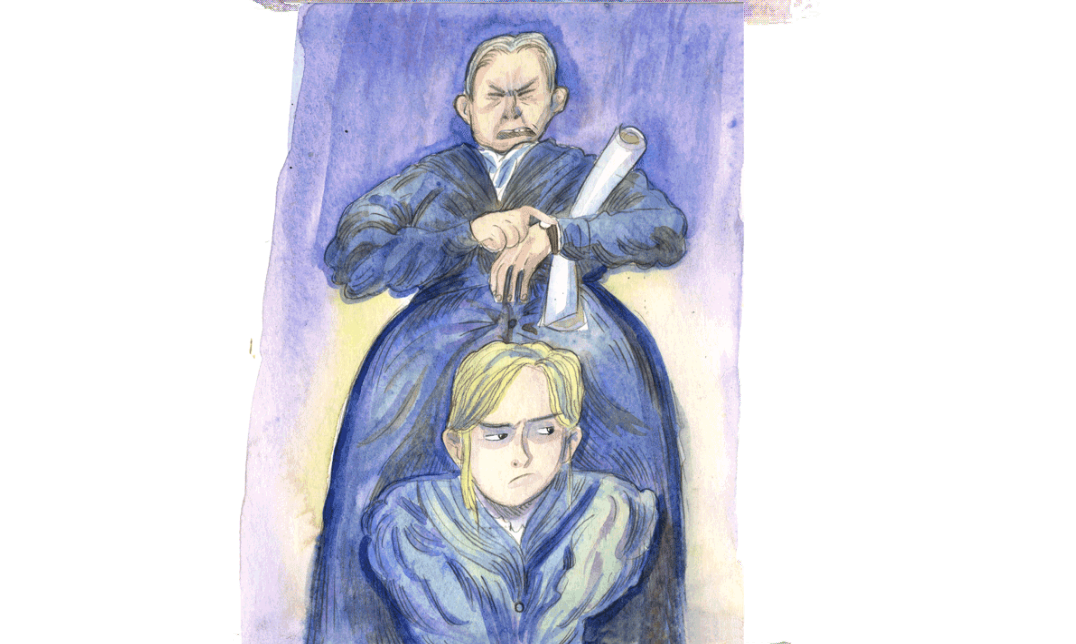 To read each story go to the RAF Museum site.