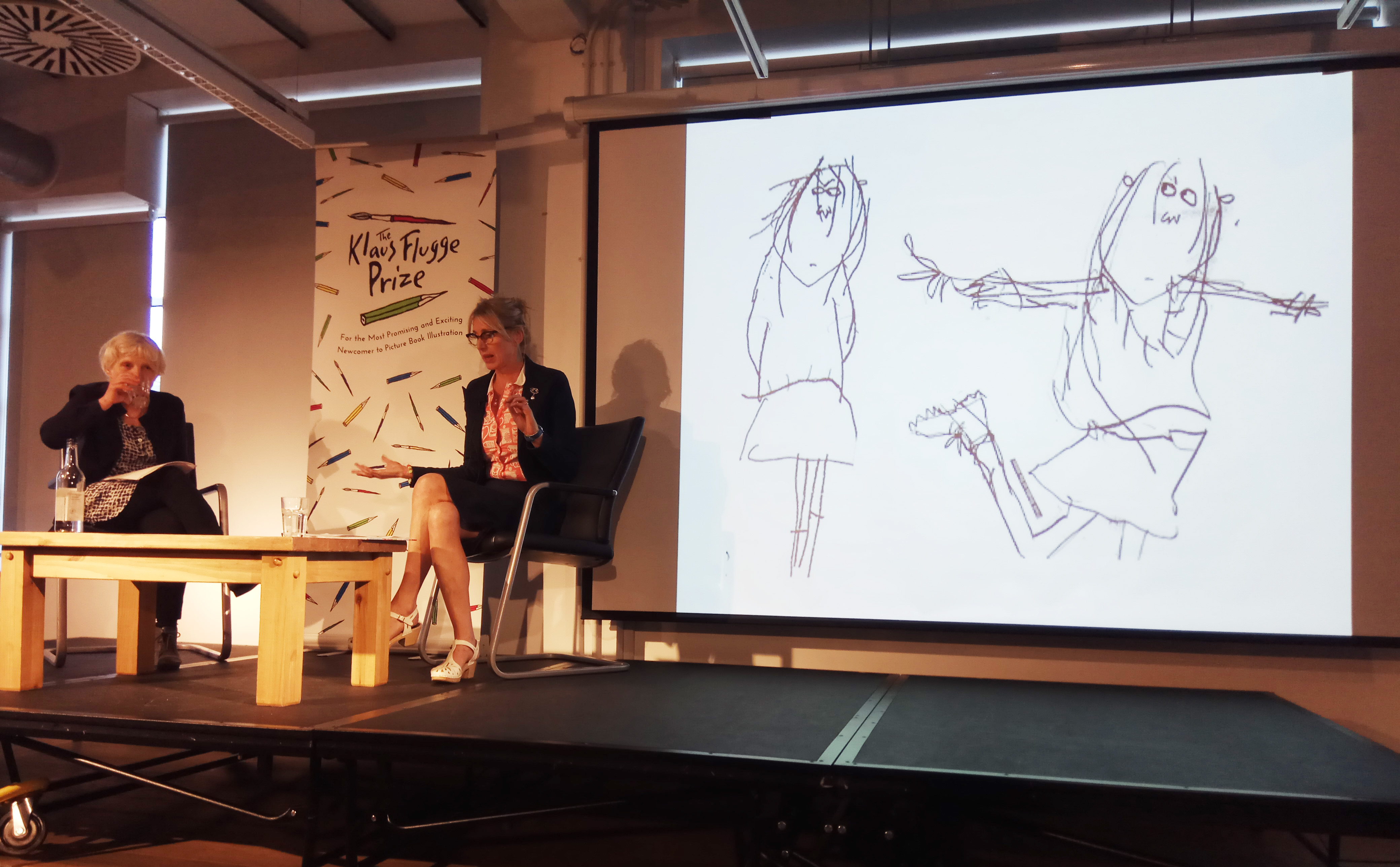 The shortlist for the 2018 Klaus Flugge Prize, awarded to the most promising and exciting newcomer to children’s book illustration, was announced at an event on 16 May. Before that Julia Eccleshare, chair of the Prize judges, was in discussion with Children’s Laureate and Prize judge Lauren Child on the art of picture book illustration.

“What illustration does is very important, because for one thing it’s often the first introduction a child has to art, and reading. They can read a picture, that gives them confidence, and understand design, which is an important thing.”

Child, creator of Charlie and Lola took the audience through her very first picture book Clarice Bean, That’s Me, talking candidly about the challenges she dealt with before producing the final book. “I did a lot of failing running up to Clarice Bean”. She revealed that although there was pressure from publishers to do so, ‘I was so glad I didn’t compromise’, as creating a picture book is ‘a very, very difficult thing to do’. She’d been advised to be more like what was already being published, but stood her ground and was prepared to wait for her work to be accepted as she created it. 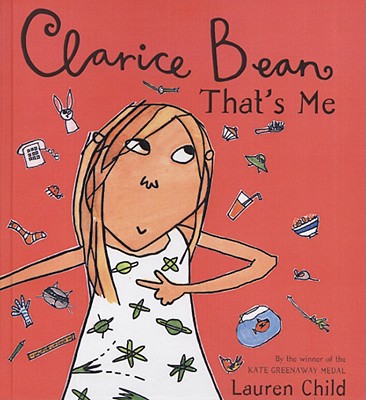 While talking about the construction of her images (lots of cutting out that requires a lot of space), she pointed out the Chinese fabric she had used for clothing in the Clarice Bean illustrations. This was from the leftover fabrics from a previous attempt at a business when she was trying to make some money, ‘My failed lampshade business was the making of me as an illustrator!’ 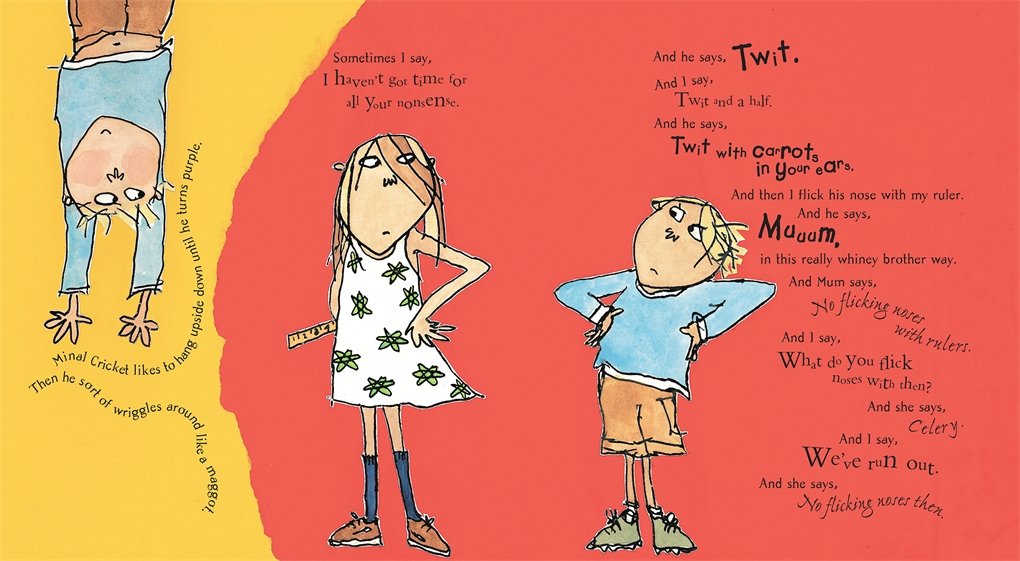 Known for an adventurous use of typography, Child said she started using different fonts ‘as a voice’ for different characters, hoping that would bring animation into the layout. She emphasised the importance of design as something young readers can become aware of through picture books. 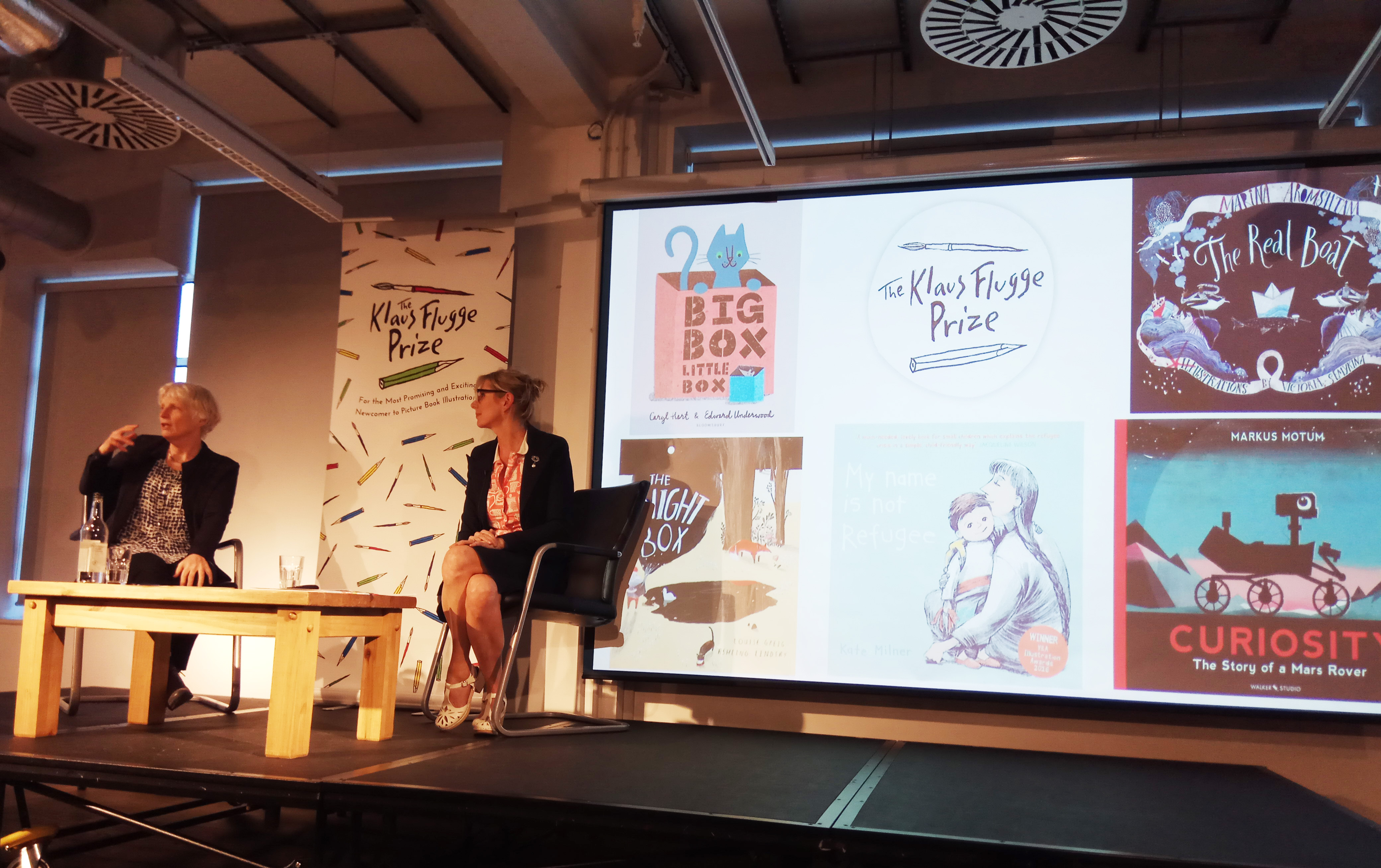 Asked if the  Children’s Laureate role was changing her sense of what illustration can achieve, Child said “I think it has in a way, as I’ve always been a big believer in the importance of illustration – that illustration is an artform, and it’s often forgotten that it is. It’s often seen as an extra or an adjunct to the writing, and it’s always the writer that we talk about rather than the illustrator in a funny way.” She clarified that Quentin Blake is a real exception to that, but if we dicuss Julia Donaldson books “we talk about ‘Julia Donaldson’s’ books, but they’re as much Axel Scheffler’s books, because without him they just wouldn’t have the same strength. She’s a very good writer but I think he’s really understood what she’s doing and giving it such authority because he’s such a good illustrator.”

Discussing the relationship between text and images she commented that a text can be diminished by illustrations of an inferior quality, “but a good illustrator can make a so-so text better than it is. I really feel that. You can get really lost in illustration – it is what it is.”

And further to her position as Children’s Laureate she mentioned discussions that she has had as part of her role as a trustee at House of Illustration: “We’ve all been saying that illustrators should be less nice. I think the problem is ….  Illustrators don’t speak out the way that writers do. You’ll have a much more furious debate with writers than you will with illustrators.”

Still, Child combines being extremely nice with a great talent for storytelling with images and text, and a generous yet not uncritical approach to the industry. A valuable member of our illustration world. 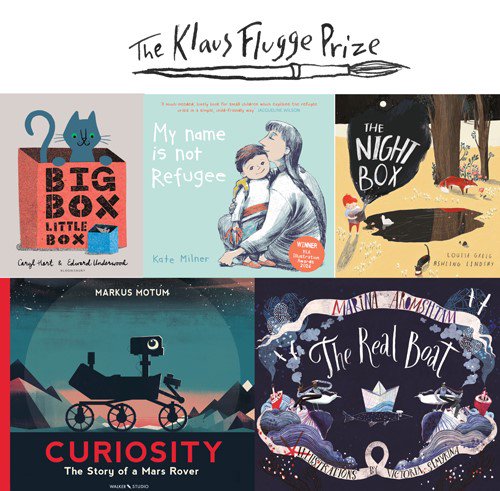 The Klaus Flugge Prize shortlist is: