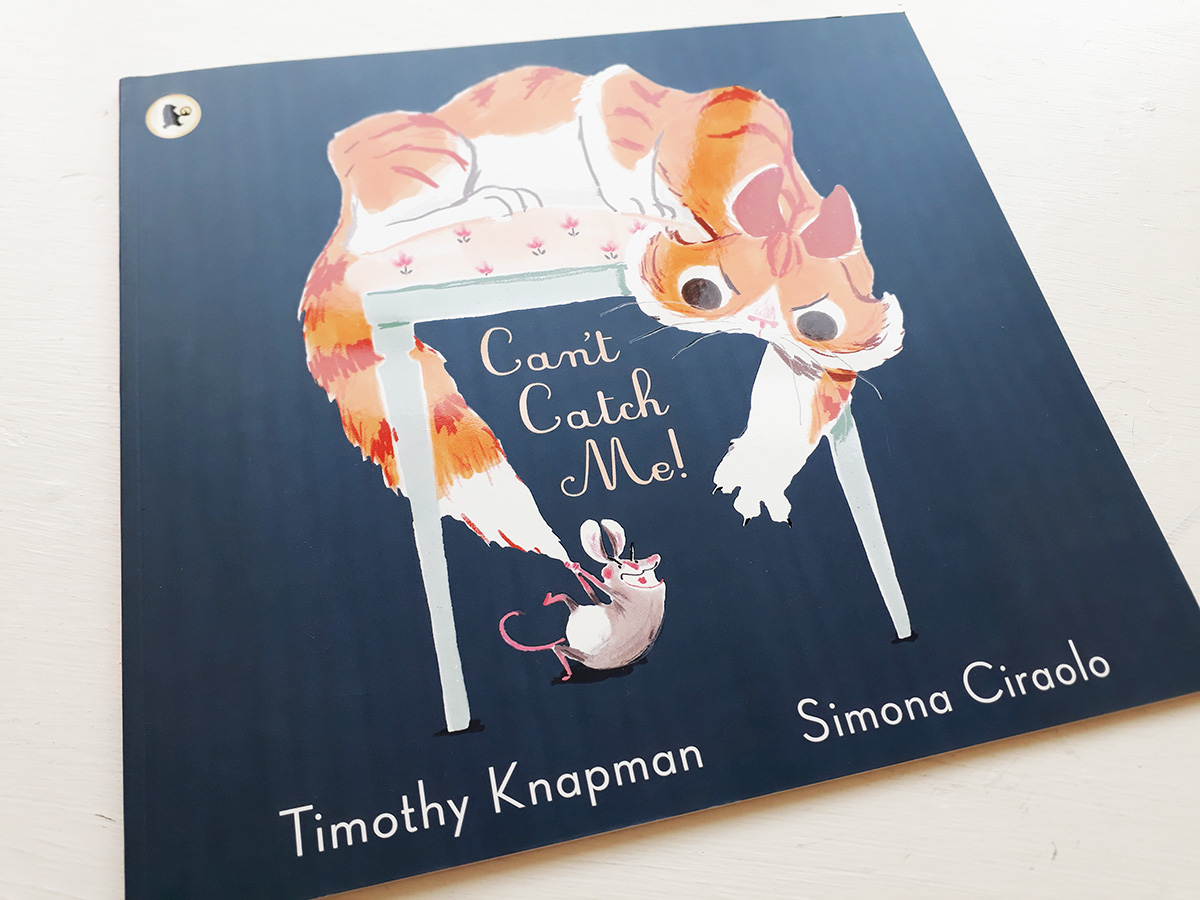 Author Timothy Knapman puts a modern spin on this oh so traditional tale of cat and mouse antics. Evocative of the 19th Century publications that featured fugitive men made of ginger and industrious hens, this story of repetitious scenes featuring an ever-growing cast of characters is simple enough: catch that mouse! 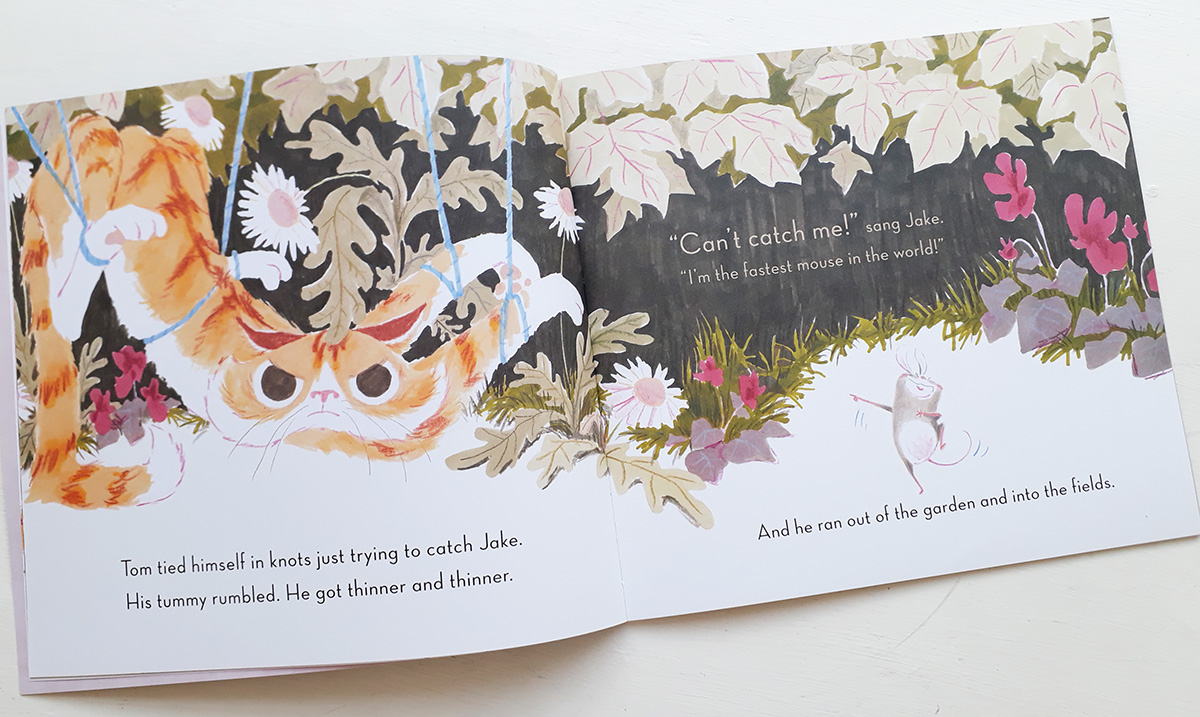 Jake the mouse is very fast and very boastful, he insults animal after animal as he races around the globe, indefatigable to the last. His stock phrases “Can’t catch me!” and “I’m the fastest mouse in the world!” will be a joy for young readers to speak aloud. The friendly geometric typeface used is clean, precise and set to aid literacy. 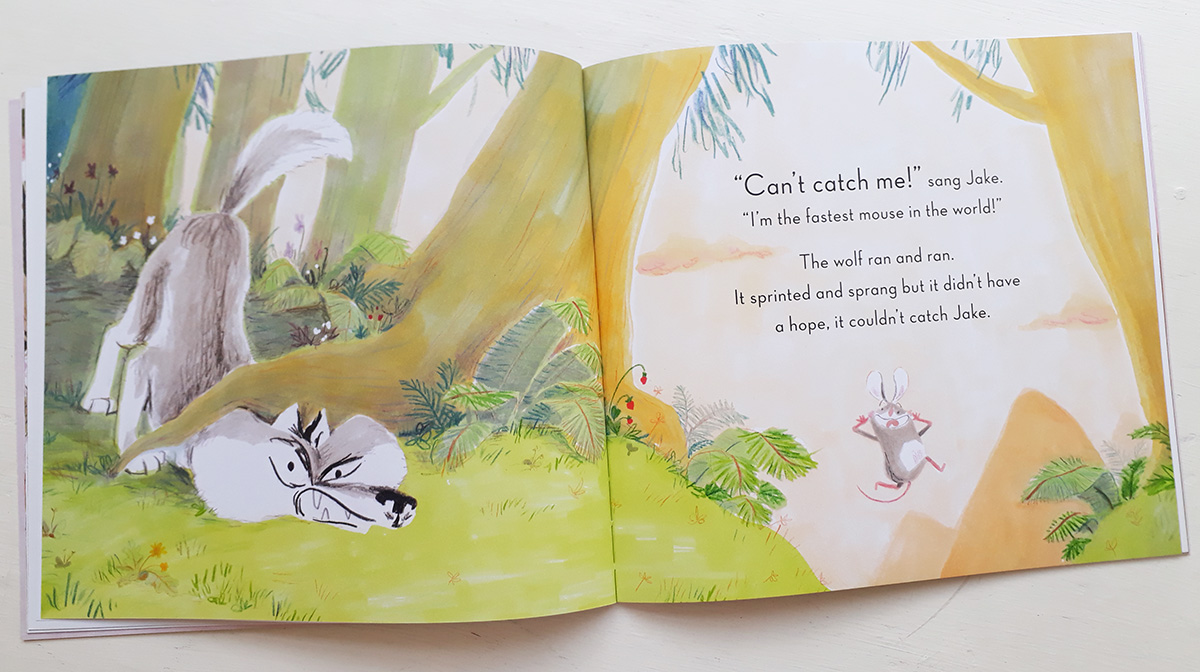 Simona Ciraolo’s illustrations are loose, dynamic and direct. Her landscapes and locations reference artists like Eric Ravillious and Maurice Sendak. Jake shows pure joy in his face as he scoffs at every creature he meets. He has no respect and is brimming with over-confidence. There is a moral to this tale, and Jake learns it perhaps too late.

Powerful faces and subtle colour schemes indicate that we are looking at the work of a skilled draftsperson capable of saying much with little. Tom the cat’s body language and facial expressions in the later pages are exquisite. 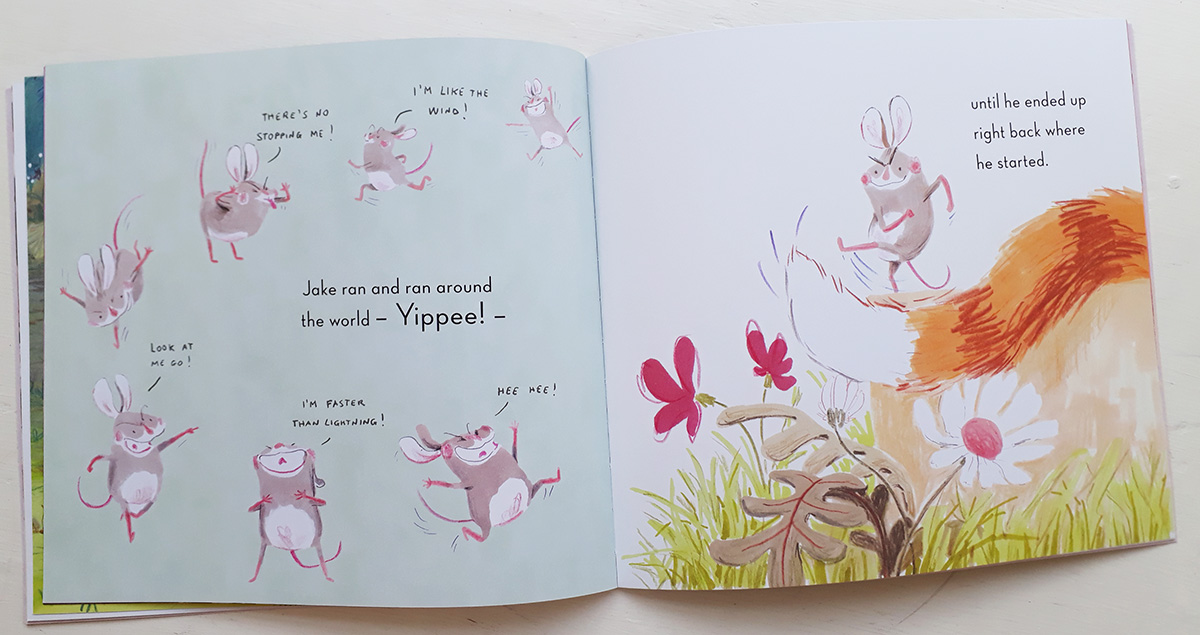 Ciraolo is one to watch, and it is clear that she will go from strength to strength. I still remember her work from her Masters in Children’s Book Illustration show a few years back. She has an animators’ eye and I can see this book evolve into a short film with great voices for the characters supplied by the actors Joanna Lumley, Tom Cruise, Samuel L Jackson or Kevin Hart!

I asked Simona about her approach to Can’t Catch Me!

When you are designing a character for a book, how do you usually start?

The way I approach the design of a character is by thinking of what he stands for within the story and what he has to communicate. In this particular book the character design was somewhat challenging: Jake, the main guy, is a bit annoying and very naughty. He is also entertaining and, since he gets us throughout the whole book, you want him to be fun, but at the same time it is important that a child doesn’t like him too much or the end of the book would be too heartbreaking! Achieving this balance was finicky, but hopefully we got there in the end.

Do you use a sketchbook, and how does this impact on your work?

I used sketchbooks to design the characters. I worked from photos and videos to study the animals, except for the cat, who’s 100% designed from a real life model who was very happy to pose for me.

Simona: This is the sketch where I found Jake the mouse – Tom the cat wasn’t there yet.

Have you been influenced by animation? And if so who are your influences?

I reckon my background in animation has a big influence on a book like this, it forces me to see the characters in the middle of the action and helps me to keep the drawings lively.
When we first discussed how to approach the text with Maria and Deirdre at Walker’s, we chatted about Hanna and Barbera’s classic cartoons and these have been a great inspiration while I worked on the illustrations.

Simona: This is the first layout for the spread where Jake outruns the fox.

What are you going to work on next? Do you enjoy the collaborative process?

I enjoyed every second I spent working on this book. It was lovely to work with a team who has so much experience from whom I learned loads, and I am extremely happy I’ve had a chance to bring to life one of Timothy Knapman’s stories.

The book I worked on after Can’t Catch Me! was also a collaborative project. There are some animals there too but the main characters are very much human! It will be released in September.