News / ‘Understanding each other better’ – the Artists for Democracy interview

Artists for Democracy formed on January 21, 2017 when a group of reportage artists united to experience and document the Women’s March in Washington, DC. Before the group had a name, those in the group had individually drawn political events ranging from campaign speeches and rallies, to Occupy Wall Street and Black Lives Matter protests. 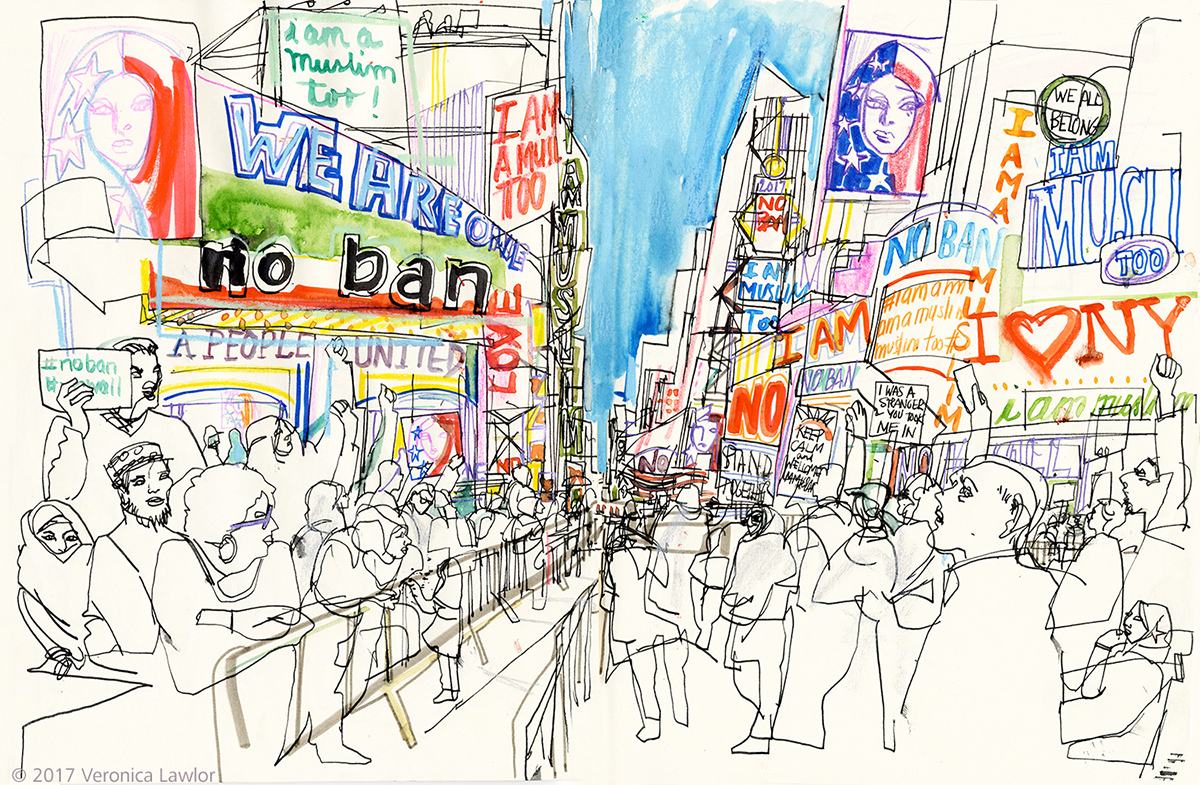 Veronica Lawlor, February 2017, Times Square, NYC. Rally “Today I am a Muslim Too!” This rally was created in support of the Muslim population of the US, and specifically of NYC. Protests and rallies of support for Muslim citizens and immigrants have sprung up all over the country as Donald Trump repeatedly tries to push his so-called travel ban through the courts.

When Julia Sverchuk launched the group’s Instagram account, they recognised that vulnerable groups—people they loved— would come under attack from this new administration. ‘We feared the erosion of democratic values, institutions, and norms. After almost a year, we think we were right to fear it. When the truth is under attack, we believe that the immediacy and authenticity of reportage art is our most powerful response.’

All the artists in our group practice the art of reportage and are featured on the Reportager website. Many are part of the Dalvero Academy in New York City. 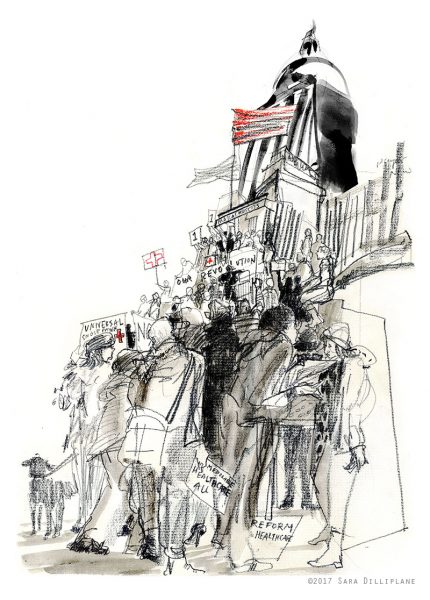 AOI asked the group about their experiences of reportage drawing from composing at speed to the challenges of preparing for an event.

How does it feel to participate in/witness the demonstrations?

Participation and bearing witness is what creates reportage. While news and events can overwhelm, it is empowering to actively participate in the unfolding of history. We are documenting the movement and ideals of the people around us and defending our values. 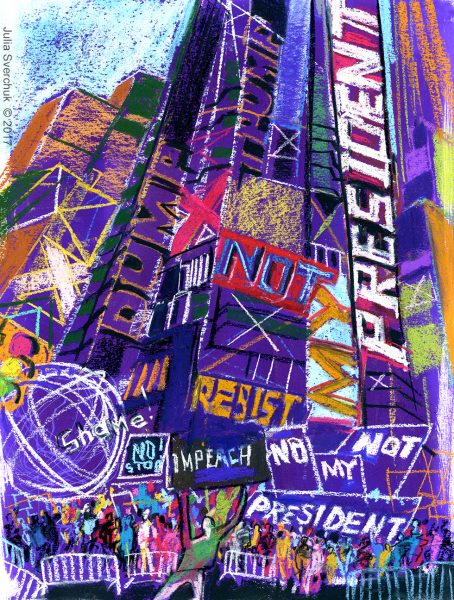 Julia Sverchuk, February 21, 2017. Not My President’s Day Rally. Trump International Hotel and Tower at Columbus Circle, NYC, is surrounded by the protesters chanting “Not My President”.

These demonstrations make politics tangible. They have a palpable energy—unique to each event. We feel and move with the people who are creating the atmosphere, and we record the honesty of that moment. Demonstrations and rallies bring together populations affected by policy, expressions of solidarity, and voices of opposition. We are left hopeful, even when recording opinions different than our own, because seeing and hearing people express their opinions live opens a path to understanding each other better. 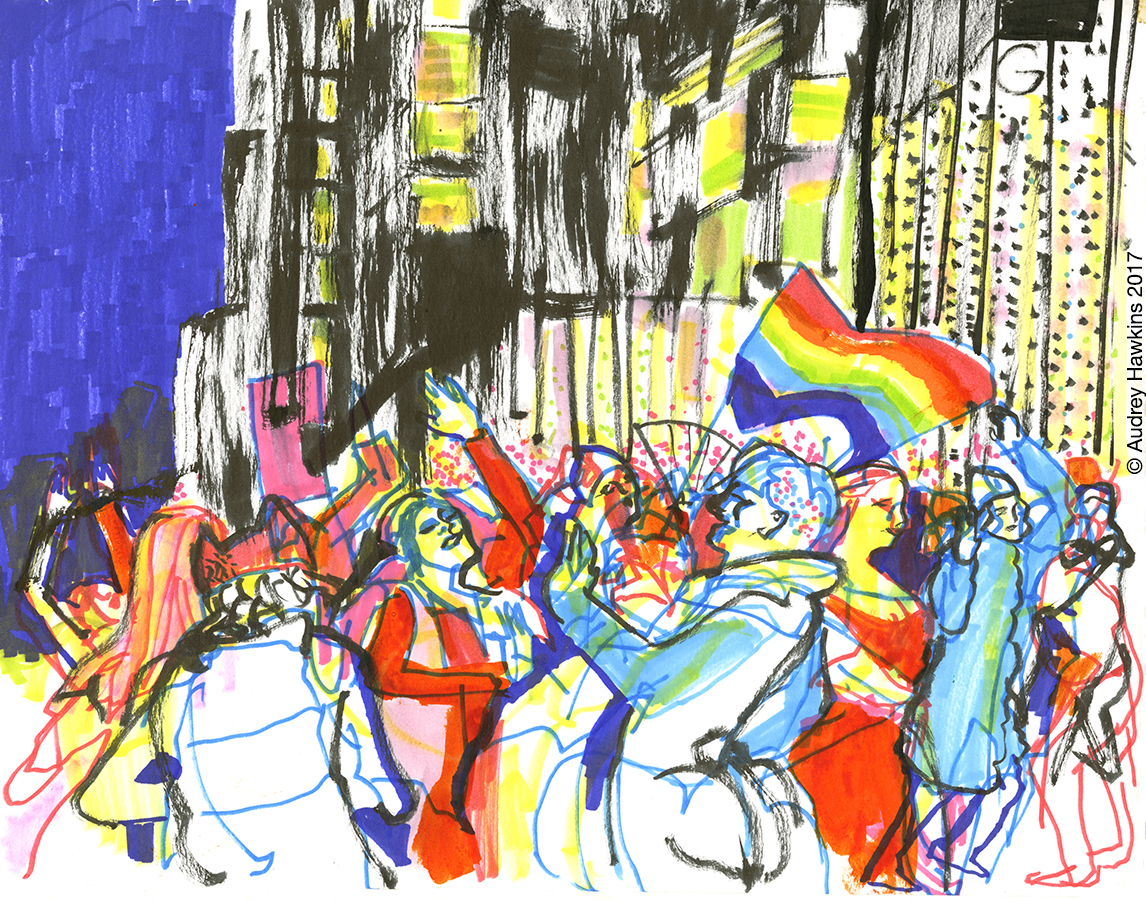 Audrey Hawkins, February 26, 2017. Queer Trans Dance Party-Protest. Drawn on location during a protest against Attorney General Jeff Sessions’ rescinding of an Obama administration memo that protected transgender students in schools with binary and gendered bathroom and locker room facilities. The LGBTQ+ community responded with music and defiant joy in the face of discrimination just outside Trump Tower in Midtown Manhattan.

What are the practicalities of drawing in a busy environment?

Drawing in a busy environment like a protest or rally requires preparation and practice to build up speed and observational skills. It requires that artists think of the big picture as well as the elements within. A busy environment requires a rapid response. There’s no second-guessing. 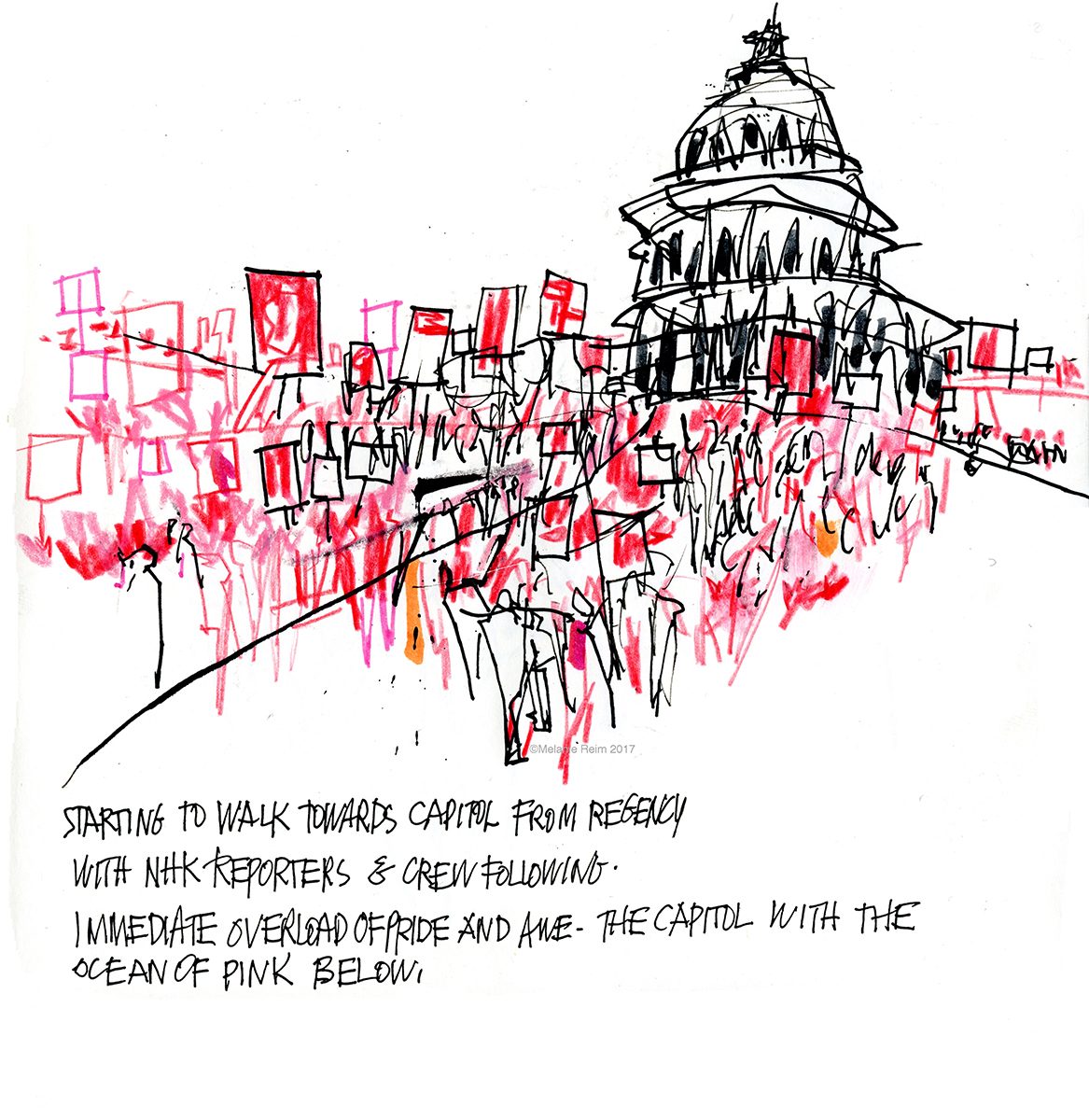 Melanie Reim, January 2017, Washington DC. Women’s March on Washington. The extraordinary power of women and beyond in outrage and response to the inappropriateness of the new American president. I was followed by, interviewed and featured by NHK Japan Television.

Our recommendations focus on supplies, stamina, and safety.

– Bring materials you can easily carry and switch between

– Wear something with lots of pockets to carry drawing supplies

– Pack a medium-sized drawing pad with sturdy backing and clips 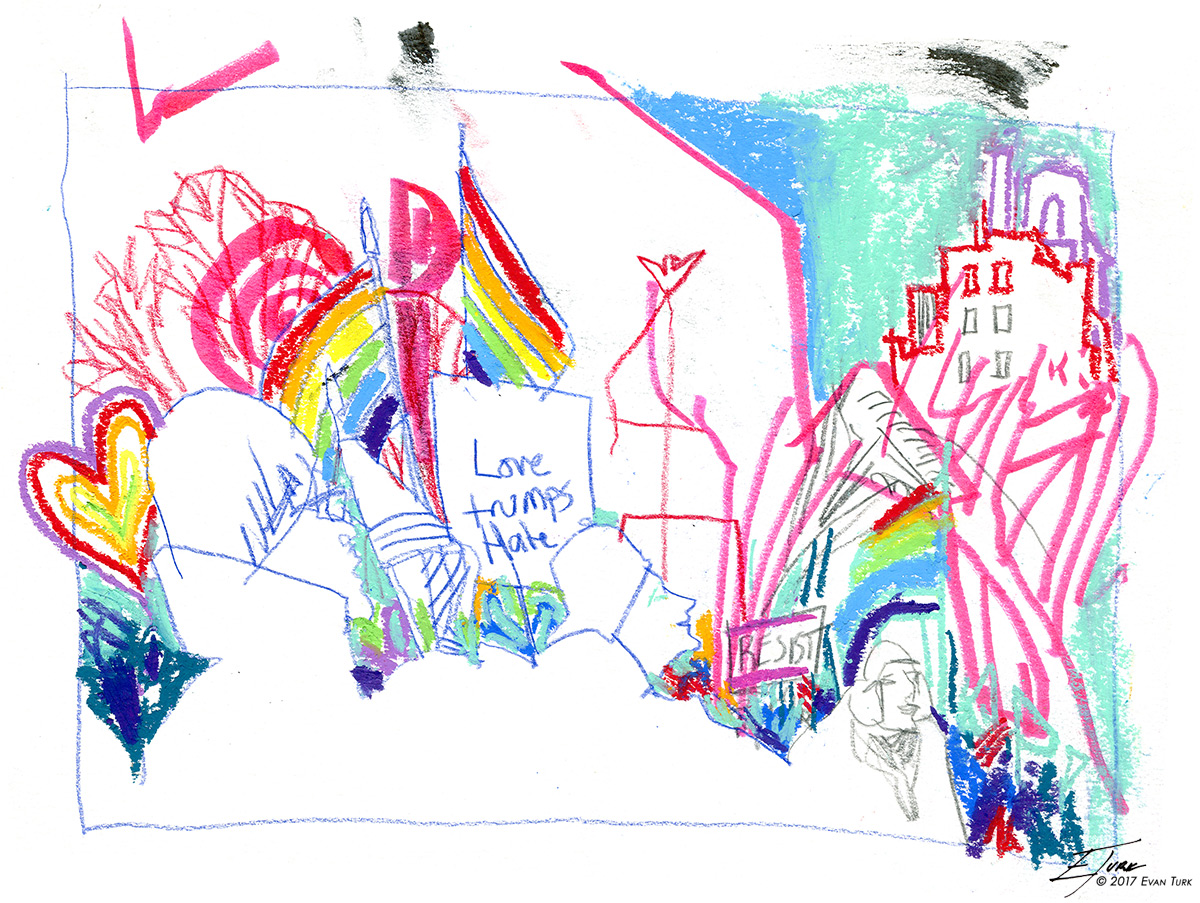 – Bring drinking water and a snack

– Handwarmers are crucial in the winter, and hand wipes in the summer 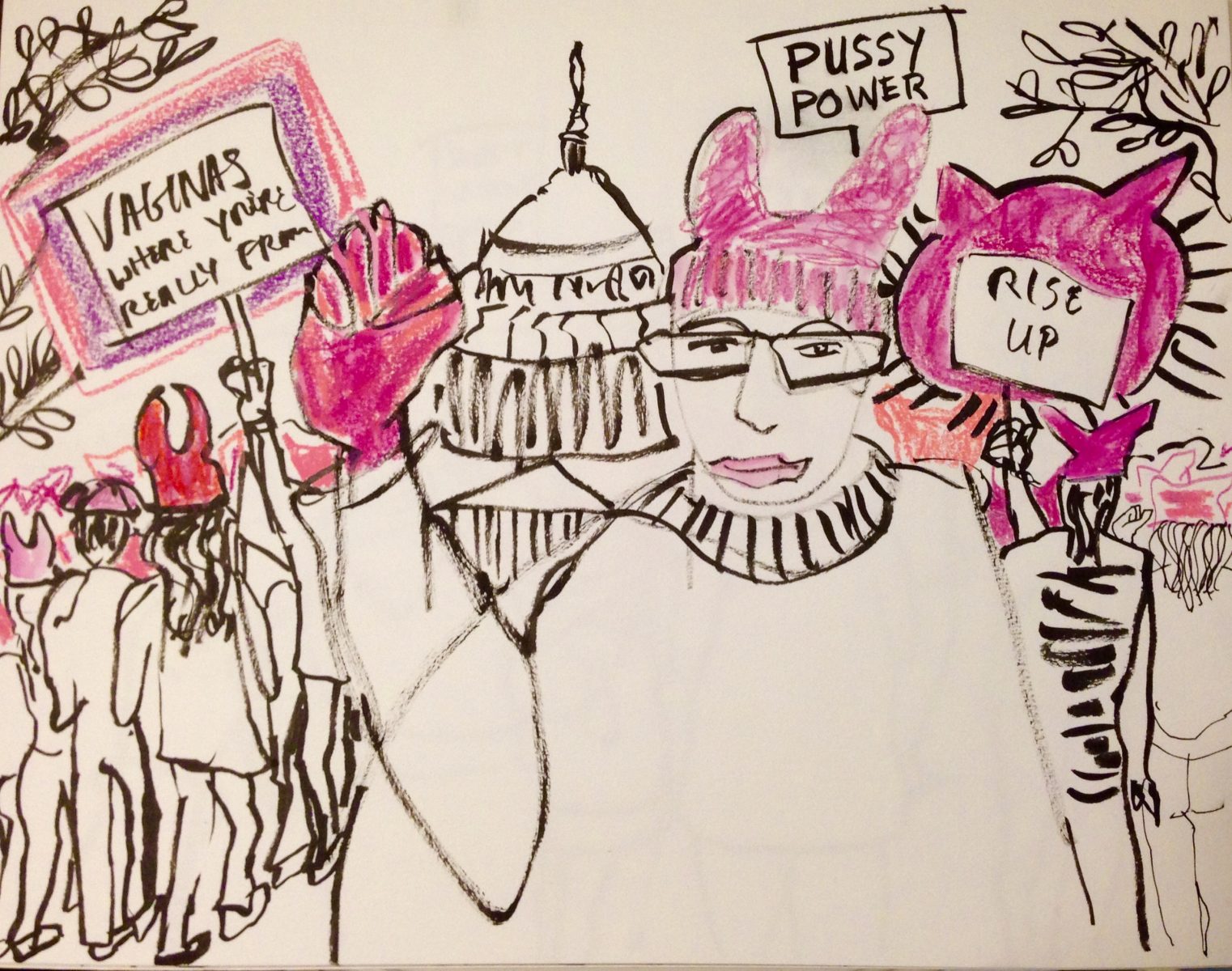 – Get there as early as possible

– Keep your wallet, keys and phone safe: in a small pouch under a layer of clothing or a in zippered pocket

– Befriend the people controlling the barricades 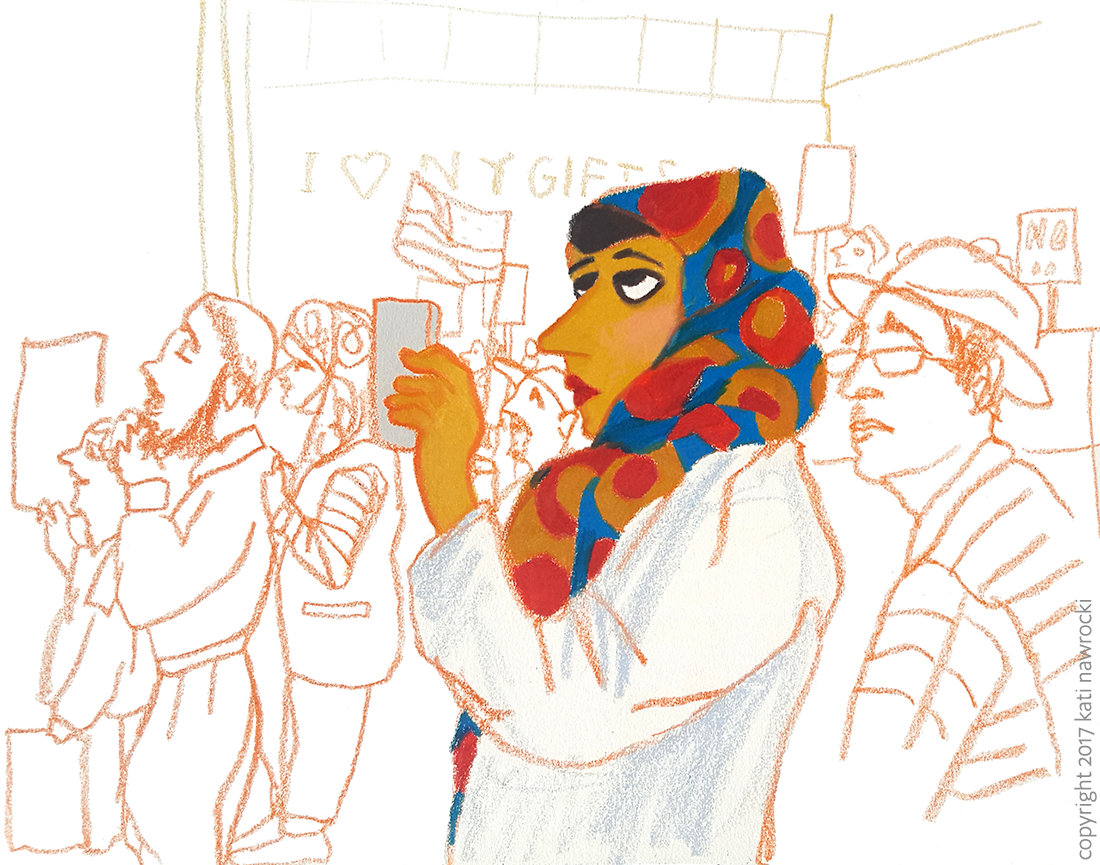 Kati Nawrocki, February 20, 2017. Female protester in a colorful scarf at the “I am a Muslim” rally in Times Square; she filmed all of the speeches, and had tears in her eyes the entire time. The people in the background are the many faces of Islam in NYC: A traditional Muslim family, Jewish and Christian allies, people waving American flags and wearing Yankees caps.

How do you design your drawings in the short amount of time you have available when the situation is changing so quickly?

Drawing allows us to focus on the straightforward act of recording, and our design choices shape how we express our own convictions. Years of studying and thinking come together with emotion and spontaneity of observation to create a unique experience and picture in real time. We’ve learned to prepare before the demonstration by studying different artists we find inspiring and making thumbnails of designs and graphics ideas. Small thumbnails are a good guide and reminders as to what is necessary to summarize the demonstration. 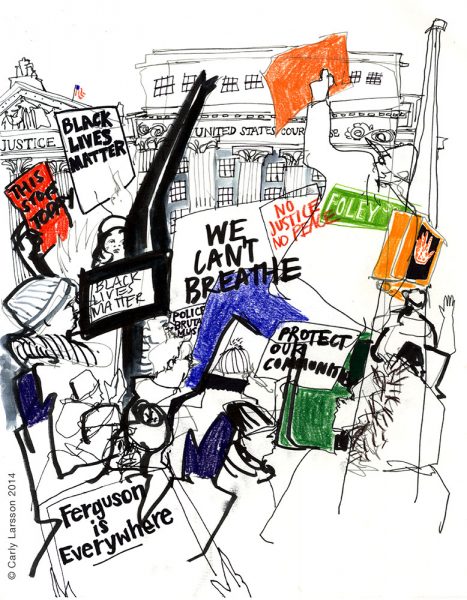 Some of us are quite regimented when it comes to thumbnails, even creating small storyboards, while others are more freewheeling, creating thumbnails on the spot. We might choose colors and materials before getting to the location, based on the demonstration. Making these choices beforehand keeps your bag light and ensures you won’t repeat yourself each time.

We all pay attention to symbols like landmarks, flags, the words and phrases on the signs carried by demonstrators, as well as the soundscape of the demonstration. These inform the graphics, colors, shapes, and marks of the reportage. This is another case where an artist’s sensitivity to their surroundings plays an important part. 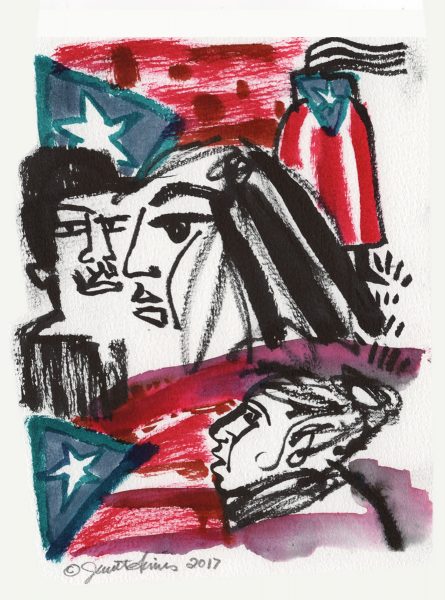 Jeanette Simmons, November 19, 2017. Puerto Rico Unity March in Washington, DC. “A Unified Puerto Rico” The multitude of Puerto Rican flags flying about the protesters created a vision of unity at the event.

All of us agree that flexibility is key. Situations morph and change, and you have to change with them. A basic design idea is a good jumping-off point to keep focused, but if something exciting happens, you have to be willing to switch gears. Then it’s like getting the combination to a lock, and your hands somehow remember the original designs, but larger and infused with the emotions of both the crowd and your own personal reactions in real time. 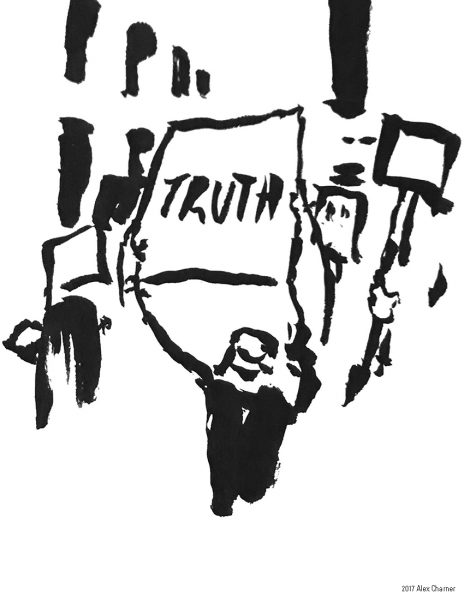 We try to keep in mind point of view, as well as picture proportions on the fly, so that the reportage will have some variation as a whole essay. You might feel some pressure, but pressure is part of the process that creates that one of a kind picture. 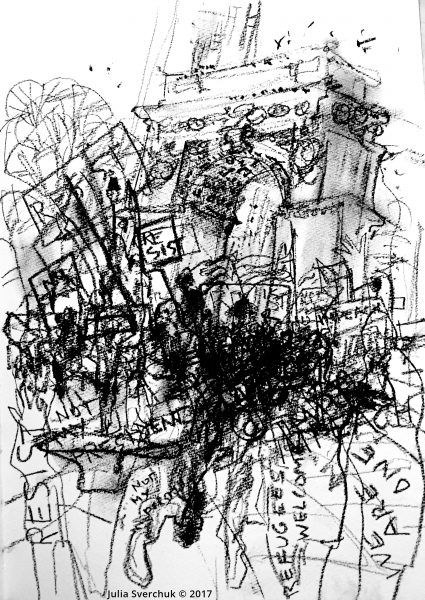