‘There seems to be weary inevitability that to build new stuff, the old things have to go,’ says Lucinda Rogers of her Ridley Road Market reportage project, ‘Recording what is there is simply to put a marker down and say these places are important. If there is no record of something, it is easier to sweep it away.’

Lucinda’s exhibition at the House of Illustration presents a strong, effective record of one of London’s communal spaces which are increasingly under threat from gentrification. Land is more valuable to housing developers than as a space that benefts those already in the local area, and with a large apartment building now constructed facing the 200 year old market, Lucinda created images from both the market and this new FiftyEast Dalston building to document how the area is currently, and to emphasise how ‘without these [market] places, city life will be more and more solitary and unnatural, which is not good for people’s health or the health of a city as a whole.’

As part of this fourth commissioned exhibition from House of Illustration Lucinda says she wanted to ‘capture the variety of stalls and shops, how they juxtapose, as well as the aspects of a market that everybody knows. I wanted to faithfully capture those people in the portraits.’ She adds, ‘I’m against aggressive, anti-social development just from the standpoint of a being a resident of London. But as an artist I’ve found that drawing can be used to help explain things, make things clearer (via the maps, diagrams, leaflets etc), or is simply another way to give people information or knowledge in pictures rather than words.’ She explains more about the project to House of Illustration curator, Olivia Ahmad:

With development in mind, why did you choose Ridley Road Market as a focus for this project?

I have wanted to draw in Ridley Road since I went there to do a small drawing in 2015. With Dalston a place of rapid change in London the market represents a place that is open to the forces we’re talking about, and the new building at the end of the road is the physical evidence of this change. 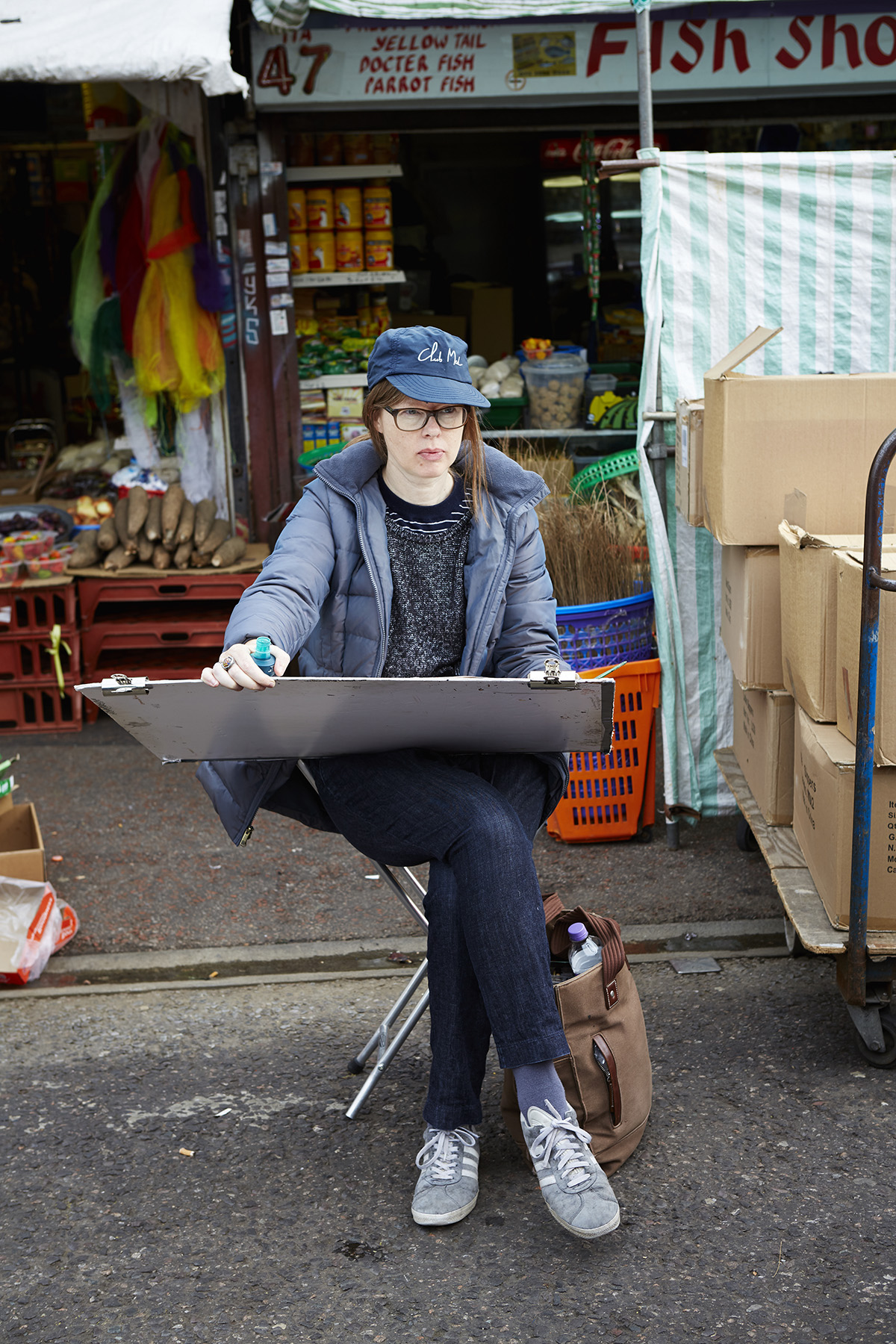 How would you describe Ridley Road Market to someone who has never been there? – its position, composition and atmosphere.

Ridley Road is a long road with a kink running east from Kingsland Road, the route north from the City of London. It dates from the 1880’s and has been a licenced market for over 90 years. Its 180 market stalls are there Monday – Saturday, which is unusual in London. Along one side of the road a long row of single storey shop units with red awnings, backs onto the railway line. Opposite are other small shop units with flats above them. The entire street is closed to traffic during market hours, giving it a special and peaceful quality. The stalls sell fruit and veg, clothes, shoes, bedding, carpets, housewares. The prices are very good, the produce fresher and much cheaper than in the supermarkets. The shops contain butchers and fishmongers that specialise in serving an African clientele, as well as shops selling goods from Ghana, Nigeria, Sierra Leone and the West Indies. There is a coffee and burger cart, a café, a Turkish gozleme van and barbecued corn on the cob. Music of all kinds plays all down the street in stalls and shops. The market has a particular social life from early morning until the last stall is packed away, with many links between the traders, their customers and other people who inhabit the market or live nearby.

How did market traders and customers respond to your project? – the act of drawing and the drawings themselves?

Drawing on the street you become public property, so people are free to say whatever they want. Passing comments from passers-by are almost always encouraging and supportive and people often mention their own abilities in art. Some people ask what I am doing. Some people give advice. Some traders went out of their way to help. Others who I had my eye on did not want to be drawn, which I accepted while being bitterly disappointed.

What challenges did you meet when drawing the tower sites?

It was windy and my water pot flew across the page. I then taped the ink, water and watercolours to the balcony ledge and held the drawing board at all times with my other hand. The picture was large (100 x 130cm) and sometimes it was hard to manoeuvre it so I could draw while looking at the scene at the same time. With the show home, I wondered how to convey the silence I experienced inside it on my own.

How would you respond to someone who views development of sites such as the tower positively, as ‘progress’ or ‘modernisation’?

To see progress solely in terms of new buildings like these is a blinkered view. The tower meets a demand for the purchase of property but the market meets important demands for affordable and specialised food and goods, social life and a place to earn a living. I think that for London to survive as a progressive city and a civilised city it has got to allow coexistence, between luxury real estate, existing communities and places like Ridley Road. The danger of the tower is that it signifies the spread of gentrification: high income places that offer less and less for everyone, with people on ordinary income levels being pushed out elsewhere. 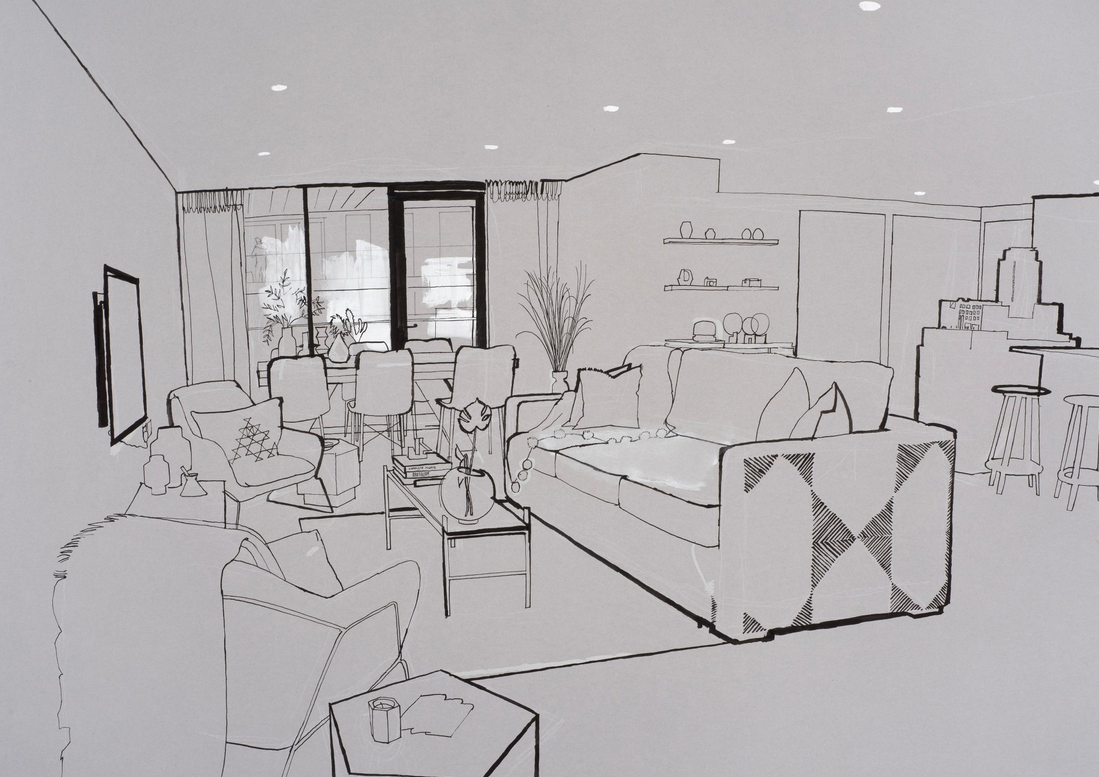 Is there a particular response you hope this work might provoke from the people seeing it?

I can’t hope for any response beyond realising what is there in Ridley Road, what is around the corner, around the back of our daily lives.

Lucinda Rogers: On Gentrification, Drawings from Ridley Road Market is on at House of Illustration until 25 Mar 2018, 10:00am – 6:00pm 2 Granary Square, King’s Cross London N1C 4BH