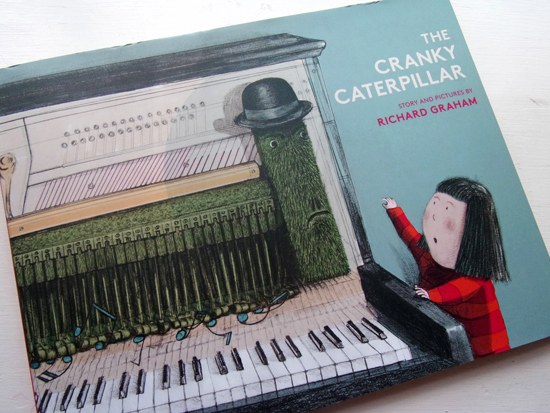 This landscape format book features on its cover a bowler-hatted caterpillar, who doesn’t look all that happy, a piano and a young girl in a striped top. The title lets you know that not all is well with the caterpillar.

This story is aimed at children aged 3 plus in which a young girl called Ezra hears a disturbing sound and goes to investigate. We actually see the sound as it enters the room. What she discovers leads her on an adventure to support her new insect friend. Ezra tries to find a way to change the melancholy of the caterpillar. The stories reference to Eric Carle’s The Hungry Caterpillar is very amusing. She tries many things but it is only through music that things start to improve. She gathers surreal looking musical instruments and the family cat together to help her play her upbeat symphony. 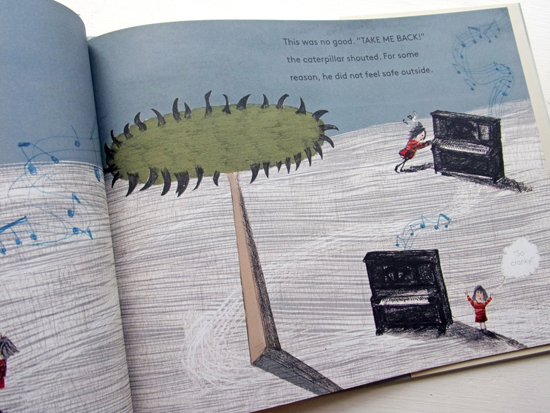 Richard Graham’s illustrations are imaginative and benefit from the automatic energy that arises when you apply direct drawing. The images illustrate the text but work perfectly well on their own, as he has a good control of visual narrative. The writing is smooth and compliments the illustrations perfectly. The use of large grey slabs across the pages suggests sadness and then pale yellow to denote joy. 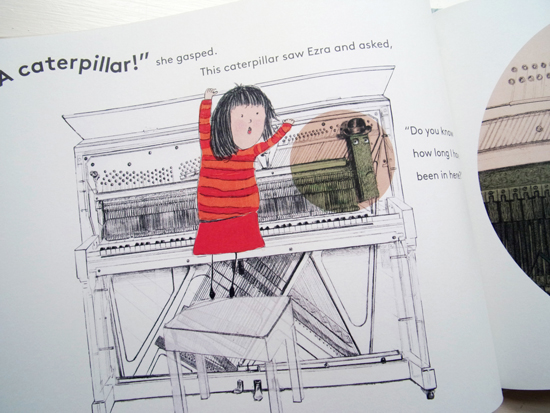 Music is at the heart of the story and it’s ability to alter the senses. The fact that the mathematics of music can be translated into image inspired the artist. Kandinsky’s has had a profound effect on Graham’s thinking. If you look carefully you will see that Ezra has a musical note for her legs. This subtle device is all part of the splendid way that he uses all the components of the musical instruments to progress the story. Graham also works in 3D using a range of materials to construct new characters and he has definitely brought this knowledge into his first published picture book with great success. 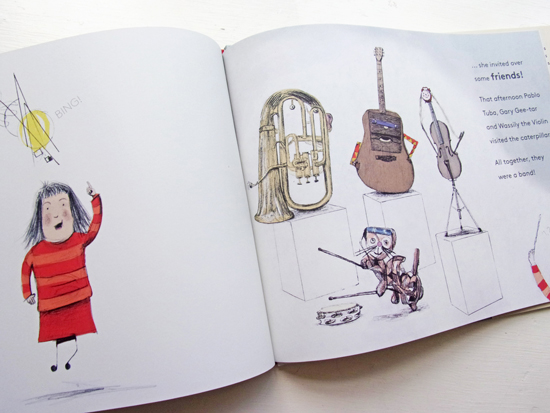 I put some questions to Richard about his work:

When did you create the Cranky Caterpillar?

The Cranky Caterpillar was originally made of real piano parts, which I found inside a derelict school, probably over 7 years ago now. I make lots of sculptures like this, and they sit in my studio waiting for a story to make them come alive. The Cranky Caterpillar story has been in development since probably around 2014.

Did you think about creating an audio CD to accompany and enhance the book?

Yes! There is a short animation of the story here, where you can hear the Cranky Caterpillar playing the piano. He is playing one of Rachmaninoff’s preludes in this short video. The reason I have made this is because I am really keen to find an animation studio who want to make this story into a longer animation. I can just see all the characters playing music together, and it could be so good if done by the right studio.

What are you going to work on next and will you be incorporating your 3D creations again?

Next up is another story, titled Mr Make, which I am also very excited about as this story also originates from a sculpted character I have been developing for a long time. Mr Make is also being brought back to life through illustration and I feel like I know his personality quite well now, having tried him in a few different stories. 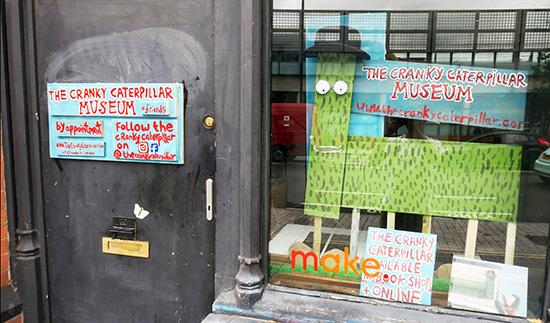 The Cranky Caterpillar Museum, is open by appointment, based in Kings Cross opposite the station. The space is showing original drawings and sculptures from the book and is on until end of December.