The Klaus Flugge Prize for the most exciting and promising newcomer to children’s picture book illustration was awarded last night (Wednesday 13 September) and presented to Francesca Sanna for her book The Journey (Flying Eye Books), which tells the story of a mother and her two children fleeing war at home to find a new life in another country. 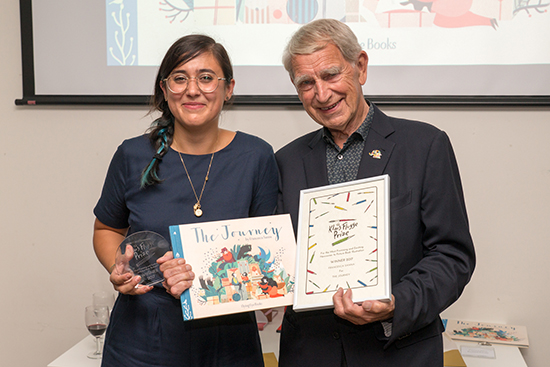 Francesca Sanna, who is Italian and now lives in Switzerland, was in London to receive the award from veteran publisher Klaus Flugge himself. Now 82, Flugge set up Andersen Press over 40 years ago, launching the careers of illustrators such as Tony Ross, Emma Chichester Clark, David McKee, Chris Riddell and Axel Scheffler. In her introduction to the award, chair of the judges Julia Eccleshare said that children across the world have grown up reading books published by Andersen Press and described Flugge’s influence on picture book illustration as enormous.

Axel Scheffler, a fellow German, was one of the judges for the award and, in a speech in which he apologised for using the B word (Brexit), praised Klaus Flugge for the tolerance and internationalism that has marked Klaus Flugge out throughout his career.

Francesca Sanna said: ‘I was incredibly honoured to see The Journey shortlisted for the Klaus Flugge Prize, together with the other four stunning books. To learn that my book had been chosen as the winner was really overwhelming. I am so grateful to the jury for this prize, which will help me continue doing the work I love, focusing on topics I deeply care about.’

The award was held at Andersen Press on Vauxhall Bridge Road. Francesca Sanna received a cheque for £5,000.