The annual residency at House of Illustration is the UK’s only residency for illustrators and graphic artists.

Burdock, a recent graduate of the Royal College of Art, describes her drawings as reflecting ‘the narrative of the everyday’. She works by immersing herself in micro-societies, observing individuals and the relationships between them, and then layering this observation with metaphor and imagination to create new worlds.

Burdock’s previous work has focused on an Amish group travelling between Southampton and New York on the QM2, and a private members club in St James’ Square. 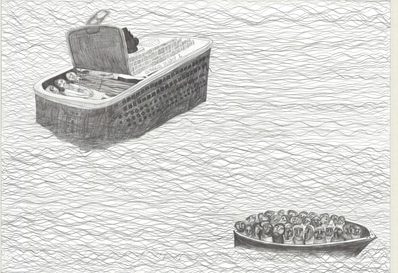 Over a period of six months, beginning on 1 September, Burdock will document and then recreate the world within House of Illustration, capturing its artists, staff and visitors.

The resulting artworks will be exhibited at House of Illustration in March 2017.

The judges – House of Illustration curator Olivia Ahmad, Eye Magazine editor John Walters and last year’s residents Nous Vous Collective – said: “From a field of outstanding candidates, we are delighted to have awarded House of Illustration’s 2017 residency to Christy Burdock. We were struck by Christy’s intrepid and sensitive exploration of closed communities and her drawn accounts that layer observation, memory and metaphor. For the next six months, Christy will immerse herself in the ‘micro-societies’ emerging from House of Illustration – we very much look forward to the outcome.”

Christy Burdock said: “I am delighted to have been chosen for the residency. I am a visual communicator working within a gallery setting, looking at how wider emerging ideologies ripple through society. An opportunity to make, test and show a new body of work responding to an institution with such a unique remit is a rare opportunity and a privilege.”

The annual residency supports an innovative illustrator, graphic artist or collective to create an ambitious body of work that challenges public opinion about what illustration can be.

House of Illustration’s residency programme is supported by The Barbara and Philip Denny Charitable Trust.