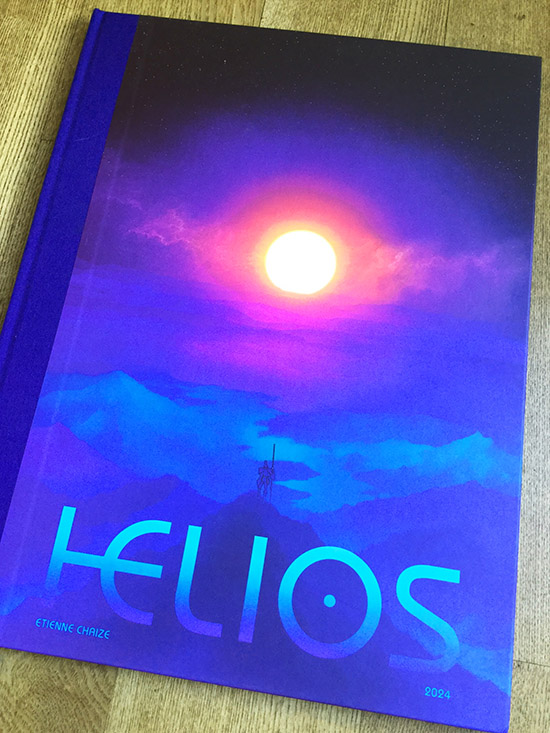 Helios says a lot about how the whole is so much greater than the sum of its parts. In this example the maths involves three illustration graduates from Les Arts Décoratifs* in Strasbourg, France; Etienne Chaize – the author, and Olivier Bron and Simon Liberman – founders of independent publishers Editions 2024.

They all continue to live and work in the Alsatian capital; Etienne as a freelance illustrator developing his book projects in parallel with his commissioned work, and Olivier and Simon running Editions 2024 (set up in 2010) to create illustrated books and comic albums. Their approach is based on the importance of “accompanying the authors in their projects, and to grow with them”. Together they work out “the technical challenges which will bring us to publish beautiful books”. They use spot colours, special formats and an uncommon binding style. 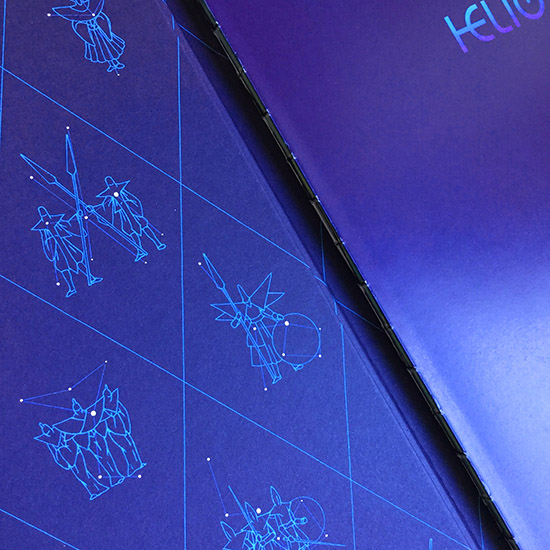 Editions 2024 initially asked Etienne to come up with a story for their new collection of large format books. He was given free rein in terms of content, the only conditions set were the size and number of pages. “I knew I wanted to work on landscapes and moods and lacked experience with characters and dialogues, so I chose to keep those at a minimum to let the set pieces express what’s happening”.

Helios is Etienne’s skilful tour de force, a synthesis of the numerous techniques that he has been developing since his time at art school. “I am at a point where I’m comfortable enough with the computer tools to be able to merge all kinds of source material… I like that you can combine the leniency of the digital tools with the richness and unpredictability of the more traditional techniques”. 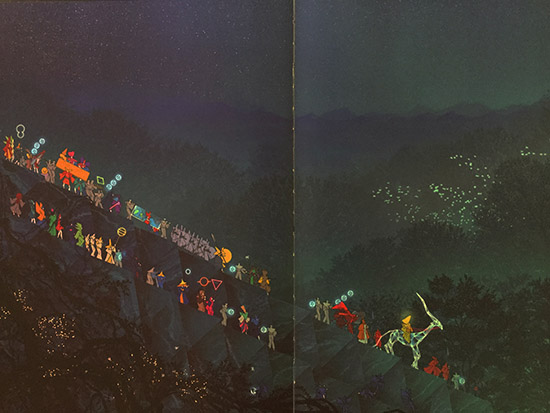 The collages of neo-classical imagery present in his background layers reflect the influence of artists such as Piranesi, Claude-Nicolas Ledoux, Hokusai; the saturated areas of colour suggest Rothko and Turner, whereas the appearance of the central figures is more a mixture of video games, Issey Miyake’s fashion designs and animation. “I’d like to find a bridge between what’s seen as pop culture and what belongs to art history, as it can only make the first richer and reinvigorate the latter”. Or as Editions 2024 put it, “the Quattrocento offered the world Hieronymus Bosch: the 90’s and Photoshop software have delivered us Etienne Chaize”. 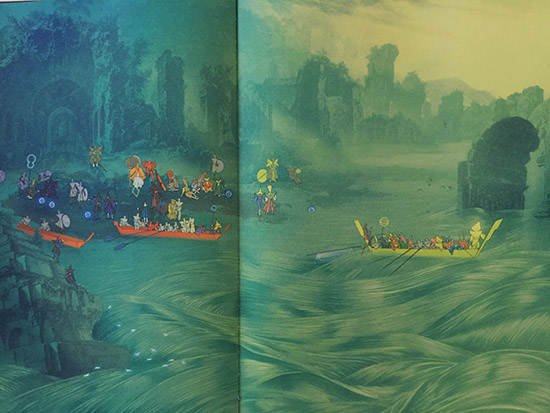 The only text in Helios appears in French in the introduction, a short paragraph that provides the context for the pictorial narrative:

One far off evening, the sun stopped setting.

The kingdom was sinking into an eternal twilight,

When a wayfarer promised to raise the spell.

They would go to meet the star,

They would walk to the end of the day.

Slowly, up rose the king and was followed by all,

In the hope of a new dawn.

Helios lay motionless on the horizon.

This epic tale is recounted entirely in images; 16 impressive, double pages (56cm W x 37.5cm H) across which the procession seeks to divert the forces of nature that threaten to prevent them from reaching their goal. 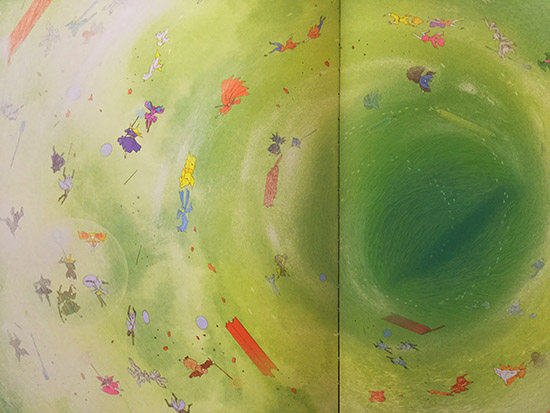 The scale of Etienne’s vision is matched by Edition 2024’s design, the sheer size of the book, the binding that allows the spreads to be opened up fully, the intensity of the printed colours, obtained by substituting the magenta in the CMYK mix with a fluorescent pink ink.

A new book project is currently underway with Editions 2024 that relates to Helios, set in a similar universe of mythical lost cities and mysterious cults, with probable links between the two. “In France… I think we get to see quite a lot of interesting projects. What’s lacking is the readership, which remains small. It would be nice to be able to reach to more people, let them know that independent comics can be for them too”. 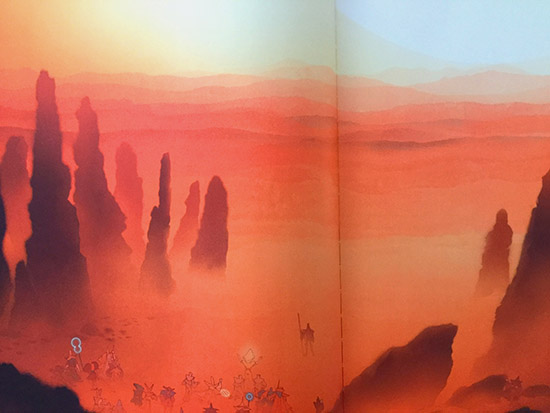 Helios is published with support from the CNL (Le Centre National du Livre), the French national book centre and can be purchased from Editions 2024 website for 23€ + p&p. It will be also be on sale at ELCAF, 16-19 June, London, on Central Vapeur’s stand.