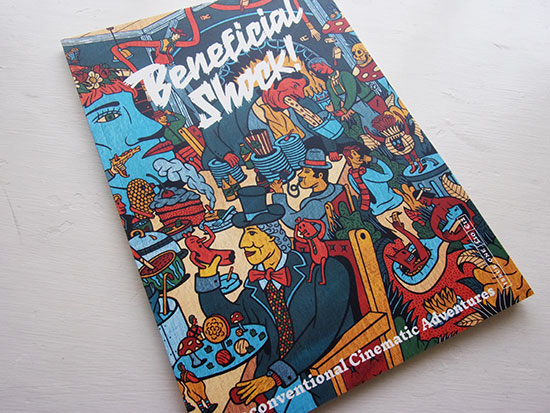 “Imagine you’ve locked the writer in one room and me in another and given us both the same assignment. The writer will give you an article, I’ll give you a picture; you marry the two.” Brad Holland

Issue One of this unconventional cinematic adventure was born out of a campaigning strategy “to see more creative editorial expression” and a love of film/cinema. They have printed two statements of intent:

Firstly, “We aim to retain independence in order to support creative collaboration and provide professional opportunities for young and emerging creative talent.”

Secondly, “We aim to challenge the traditional role of the visual creative from a content servicer to that of an author researcher and content ‘driver’ – adding value and responsibility as a visual communicator.” 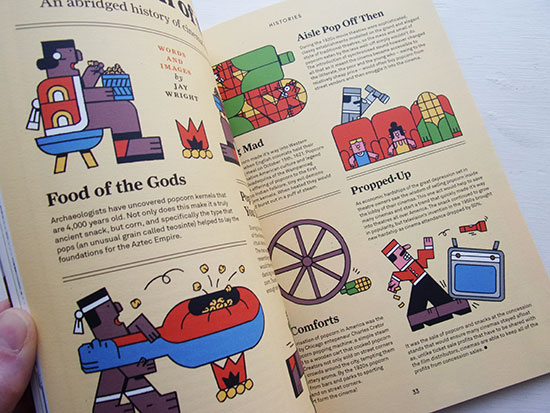 I have a critical appreciation of film so this magazine works well for me and held my interest. The theme for this issue is centred on FOOD and movies. Phil Wrigglesworth’s wraparound cover illustration is an epic scene containing visual references mined from the entire contents of the magazine. We see Willy Wonka dining at a long table with a cannibal, Mr Creosote and the monster from Pan’s Labyrinth. Beneficial Shock! is emblazoned across the front cover, Alfred Hitchcock would be proud. 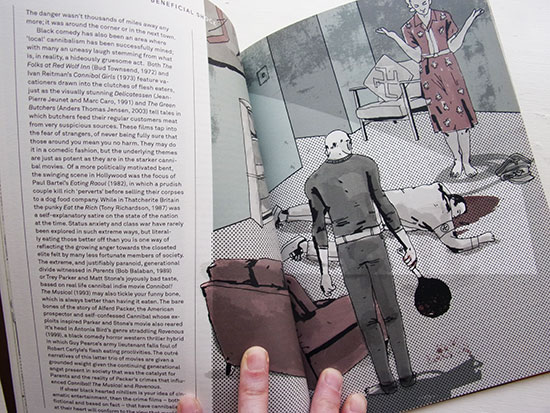 The contents page has its structure divided into Appertizers on the left and Mains on the right. The main articles reflect extremes in movie narratives and the exuberance of self-expression whether that is through cannibalism, Norman Bates’ first outing, Wonka’s World or food fights. The illustrative approaches on show are thankfully broad. Ranging from graphic to painterly, from vector to photographic, from cartoon to reportage proving once again that drawing isn’t dead, yet. There is a clear commitment to communicating content and context.

Notable for me are the articles ‘Who’s For Dinner’ by Neil Mitchell & Gwion Christmas, ‘This Could Get Messy’ by Georgina Guthrie & Arthur Chiverton, ‘Hyper Caffeinated’ by Mehruss Jon Ahi & Aremen Karaoghlanian and David McMillan’s ‘Extra-Ordinary’ a comic strip I really want to see more of. 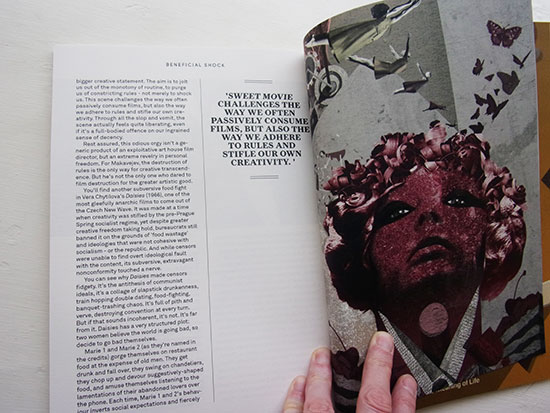 At 64 pages it is substantial enough to be credible and not so large that you give up on reading the whole thing, with stock weight and uncoated paper giving it the feel of an alternative press publication. The magazine was published thanks to a successful Kickstarter campaign and contributions can be sent via email for consideration by the editorial team. 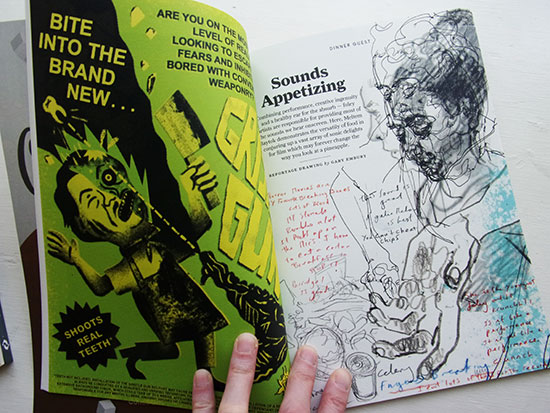 This magazine will be enjoyed by the cool and the concerned, and is a mixture of the film literacy as depicted in Edward Ross’ Filmish graphic novel and the hipster dude world of The Believer. It doesn’t have many interviews or reviews of the literary weight of The Believer, but I think this might change over time. The next issue explores the darkest recesses of the mind. There is a need for this publication to shock us for quite some time to come.