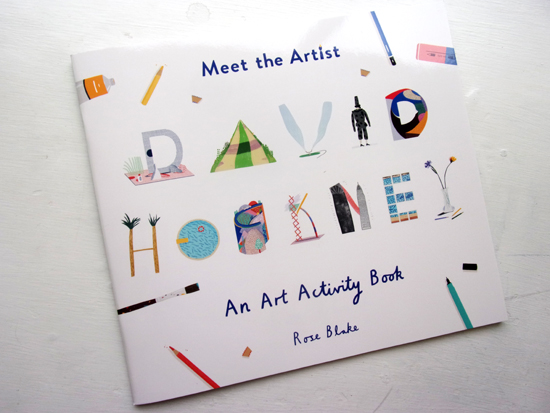 In this art activity book young readers are given a guided tour of Hockney’s art by another artist who makes pictures, Rose Blake, a big fan of Hockney. We are treated to a view of her favourite pieces that show us just what it is she loves most about Hockney’s work and is done in the way she knows best, through her own illustrations.

Making pictures about pictures is something Blake does very well, as can be seen in her prints about art in art galleries. Working with Hockney as the subject was pretty much her dream job and her familiarity with his work and understanding of its worth as art prove to be invaluable insights which make this book so much more than a run-of-the-mill activity book, to be chucked under the bed when done with. It would be fairer really to see it as two books in one, as the reader is presented with two distinct artistic visions talking together about things they share in common. 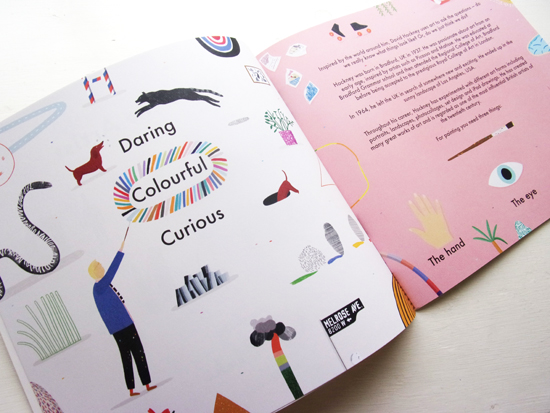 The first book is an attractive and inspiring activity book. Its open, uncluttered layout gives plenty of room for children to draw in, Blake stands to one side of the stage, it’s very much their moment to have a go. The design compliments perfectly the mood of Blake’s illustrations, refined, simple shapes, filled with flat, bright colours. Reminiscent of children’s book designs by Paul Rand or Fredun Shapur whose playful illustrations made great use of simple, paper-cut forms and bright, flat colours at a time when Pop Art was bringing Art and Commercial Art closer together. Blake’s page designs are further complimented by the choice of a widely spaced, sans serif font for the text. The simplicity of the overall design speaks loads about pleasure, wonderment, marvelling at, almost to the point of naivety. 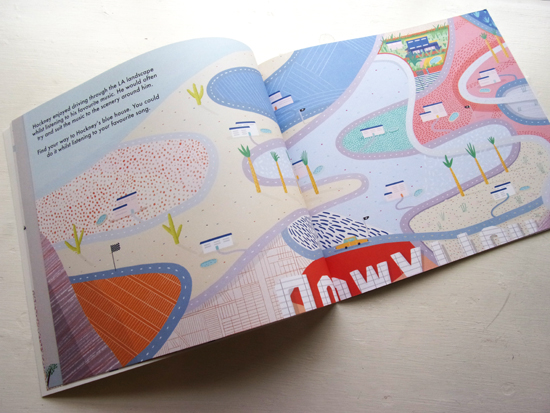 Fittingly, the enjoyment to be had in making things is a constant feature of the book. With Hockney it’s like a boyish enthusiasm that bounds out of his paintings, iPad or coloured pencil drawings, watercolour sketches made on the top deck of a London bus. Blake naturally compliments his exuberance by reflecting the less obvious qualities of his work, the details, like hidden treasures with their colours and forms.

She’s most happy when sharing this source of pleasure that enriches her everyday life, like Samuel Palmer seeing Eden in the Kentish countryside. Blake is drawn to the painting, The Baptism of Christ by Pierra della Francesca that is reflected in the dressing table mirror in the painting of Hockney’s parents. In turn, it reminds us of Van Eyck’s painting, The Arnolfini Wedding, of another married couple in which a mirror reflects the room out of the viewer’s sight. If Hockney’s recent work could be described as tending towards the big, then Blake’s pictures could be described as miniatures; intense in their vision and brilliant in their design. The title page letterforms are distillations of Hockney’s pictures that sparkle with a jewel-like intensity. 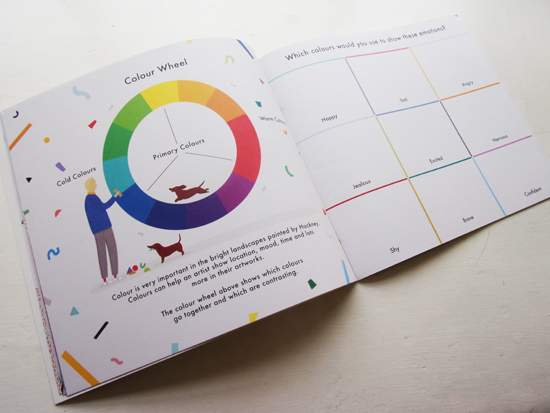 The following double-page spreads that Blake makes d’après Hockney are brilliant and, in the same way that Hockney’s work was driven by a force found in other artist’s work, Blake is evidently inspired here. They show just how much the two share a particular way of seeing things and speaks about how much Blake owes to Hockney for inspiring her own creativity. In those few pages where she has the space to express herself freely she lays out the beginnings of such an account and excels at describing this second storyline, the book within a book. Blake now needs lots more pages to continue with illustrating this rich, personal narrative that should make a wonderful book of its own. 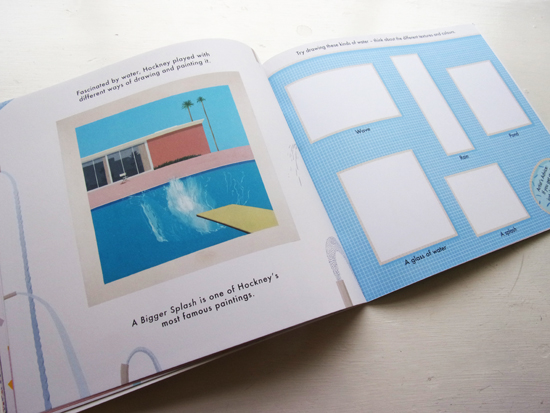 These are the Q & As that came before the review was written and which I think reveal some interesting points about the commissioning process both for Rose Blakes’s book here and in general:

How did the project start? Was Hockney something you’d talked about previously with the publisher or did it come completely out of the blue?

It came totally out of the blue. Tate have been doing the ‘Meet the Artist’ series for a while, and approached me over email to do the Hockney book. As it was pretty much my dream job, I said yes pretty quickly.

Why do you think they chose you in particular for this book? In what ways did the publisher feel your work was best suited to the project?

They needed to find someone who was very familiar with Hockney’s work as the timeline for the project was seriously tight. I think Holly Tonks (the publisher at Tate) was talking to Lizzy Stewart (another illustrator who is also a friend of mine) and she said I was a huge Hockney fan, so they approached me. I’ve always been obsessed with Hockney’s work and vision so I’m very thankful to Lizzy!

What was the brief like? Loose, very precise, how much did you get to contribute to the design of the book?

Basically the brief was to make an activity book based on Hockney’s work for children aged around 7+… we could have gone a few ways with it, but I wanted it to be true to Hockney’s spirit and vision.

After our first meeting I went and did a load of research, and then we had another meeting where I laid out all the research I’d done and we mapped out the different aspects of his work that we wanted to explore in the book. Then Holly wrote the rough text and I started working on the spreads pretty much straight away. I designed all the illustrative aspects of the page, and Jay Cover did the type.

How did you make your illustrations: techniques, process etc? Did you work differently to your usual practice(s) especially for this book?

I just sketched out a rough layout for all the pages and then drew the finals into Photoshop. I worked in the way that I usually work, only with an ever looming fear that Hockney was going to be seeing everything I made!

Was it difficult maintaining your own voice in the making of the illustrations? How did it feel to work alongside his pictures, how visible were your illustrations allowed to be in relation to Hockney’s?

No, I don’t think so. I actually think it came quite naturally. It was really fun to pull out little details from Hockney’s work and integrate them into my drawing. For instance, Stanley (Hockney’s dachshund) dressed up as a Punchinello from Parade. I think they were allowed to be pretty visual… it was strange, as I work on all the finals without the Hockney paintings dropped into the layout, so when I saw the final book printed I was happy they worked together! 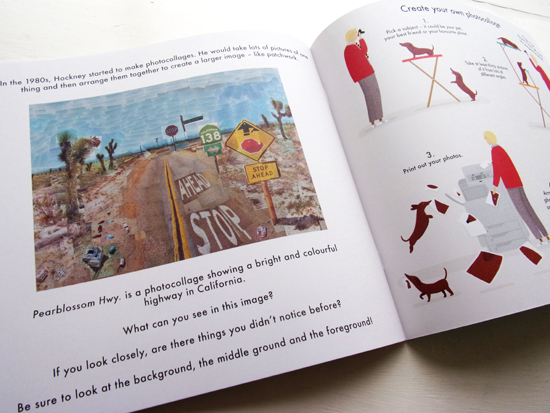 Did you get to choose the artworks that you show in your illustrations or were you given a list of those to be included?

I was given a list of all the works that were going to be in the Tate Britain show, and we picked from there.

How much of an influence has Hockney been on your work, in what ways?

A huge one… I don’t even know where to start. The thing with Hockney is that he has produced SO much, and it is all incredible. There is so much to discover – while I was doing the book, I found all the preliminary sketches he had drawn for the Opera designs, and they are masterpieces in themselves. It’s like having a favourite band, and constantly finding new albums by them that are all totally different, but equally enjoyable.

He just has such a good attitude… no bullshit. Look at the world, enjoy what’s around you, be honest.

How did you go about creating the character Hockney, from photos, sketches you found or were you able to work from the model himself?

Ha ha, I wish I could say I flew to LA and spent a week soaking up his aura… but no I drew from photos in my freezing studio in Haggerston. I chose to draw him as a kind of 80’s Hockney… I was tempted to have him age through the book – so start as a student, and end now. But as the artworks aren’t picked chronologically, I think this would have been too confusing for the reader. All the clothes he wears in my drawings are his real outfits though.

Have you had any feedback from Hockney about your work on the book?

Yes! He sent me an email, a text message, and he wrote a really nice message in my copy of the book. He seemed to be really happy with it, I spoke to his brother and sister at the exhibition and they were like ‘Oh! You’re the girl that did the book!’

Other than Hockney which sources inspire, inform, help the way you create images?

I’m always on the look out for things happening on the street – just little visual moments. This morning I saw a kid trying to climb the railing protecting a tree that had just blossomed, so jotted it down for a future drawing. I write loads of notes in my phone, things people say, so my phone notes are full of things like ‘I heard sirens… but it wasn’t my ambulance’, ‘Bin with a round Bakewell tart with red cherry on the top’ and ‘NEW MOON IN WETHERSPOONS’ – total gibberish really, but little starting points.

I look at loads of paintings, try (and often fail) to go to lots of shows to see them in real life. I read lots, but am quite bad at watching films – it’s always my new years resolution. I’m always scrolling through Instagram too… 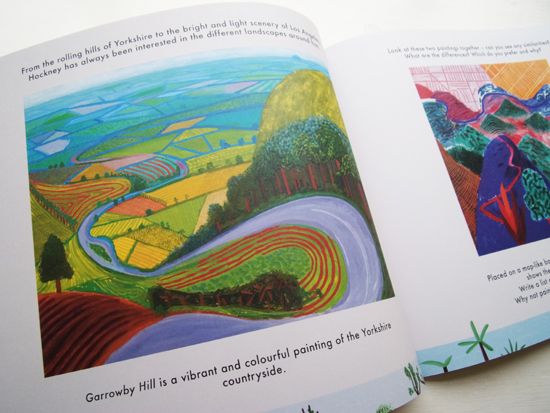 What book project would you love to work on most?

Well, the Hockney one was a total dream project, but I am actually about to start work on another dream book! I’m not allowed to talk about it yet, but it will be out early next year I think.

I’d love to do something with David Byrne… imagine a children’s book written by him!