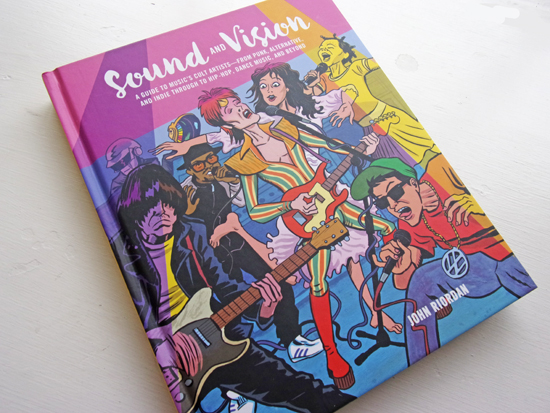 This book promises a great deal from the moment you pick it up and hold it. It is a hardback with black edged pages, and the cover is lively, colourful and very well drawn. Then when you quickly flick through the contents before reading it properly, you can see that it is well designed, well constructed and packed full of gorgeous illustrations and information. 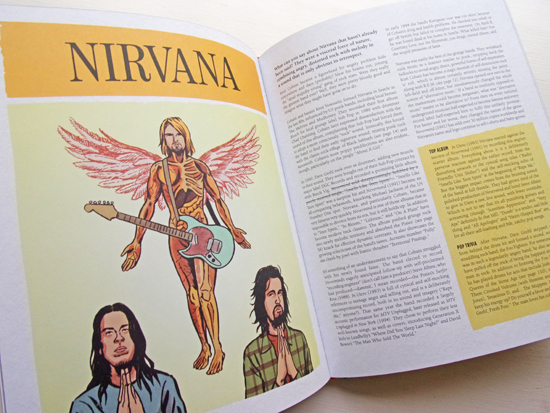 Sound and Vision was written and illustrated by AOI award winning John Riordan, and is a guide to 100 musicians and bands across five decades, from the 1970s through to the present day. Each artist is illustrated with a skillful and accurate caricature, the style and content of which have been very creatively considered. There are also a number of comic strips, and of course each artist also has a background including origin stories, career information, albums and hits and trivia. I contacted John and asked him to share his experiences of creating the book.

Spencer: How did this book begin?

John: Like many good things in life, this book began as a joke. I’ve illustrated a few books for the publisher Dog ’n’ Bone, on subjects as diverse as booze and poo. They asked if I’d be interested in creating a book on a different subject, and after thinking about it for a while I decided that the subject wasn’t really my thing, so reluctantly said no. Explaining this to my editor, Pete, I mentioned in passing a deliberately stupid idea that I had while doing my Illustration MA at Camberwell in 2012. The idea, which I didn’t end up pursuing at the time, was to do a book in the vein of Robert Crumb’s Heroes of Blues but instead to do John Riordan’s Heroes of Indie 1991 to 1994, drawing and describing the obscure pre-Britpop bands who got me into music when I was a teenager and who rarely bothered the lower reaches of the charts. Pete laughed and said “You know, it couldn’t be that niche but there might actually be something in that”, and it snowballed from there, becoming along the way an illustrated guide to all sorts of ‘alternative’ pop music from the 70s to the present day. 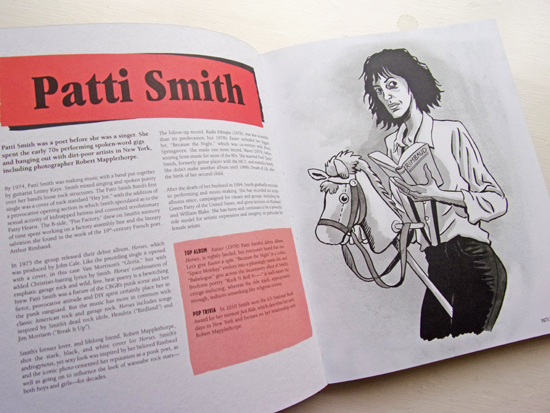 Spencer: What was your process?

John: The book’s divided up into five decades so I tackled the illustrations and then the writing for each decade in order. This meant that Pete and the designer, Eoghan, could put together each section while I was working on the next one. The whole book took just shy of six months, but I had a month off in the middle when I got married and went on honeymoon! I definitely didn’t realise how much work I was taking on when I agreed to write as well as draw the book.

Generally speaking the illustrations started off as pen, ink and paint and then got tarted up in Photoshop. What was particularly fun was to vary the style to reflect the image of each band or musician, sometimes aping the visual tone of their record covers or even riffing on one iconic image. For example, my illustration of The Smiths mimics the melancholy monochrome of their sleeves and my picture for the Super Furry Animals nods to their regular illustrator Pete Fowler.

I’m a comic artist as well as an illustrator and Pete was keen to use this side of my work as well. So there’s a smattering of comic strips throughout the book, poking fun at the artists and weaving daft tales out of their biographies. 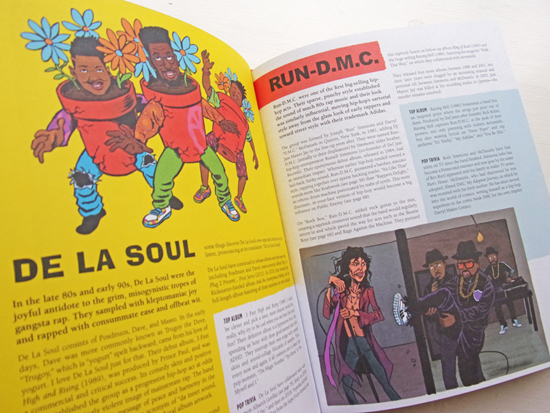 Spencer: What part of the book are you most pleased with?

John: There are particular illustrations that I’m really pleased with and they’re not necessarily the most ‘show-offy’ ones. Because of the volume of work there wasn’t an enormous amount of time to revise or rethink illustrations so the ones I really like are the ones that came together particularly well on the day. The picture for The Specials is probably my favourite. There are little bits of writing that I’m particularly pleased with as well. It became clear early on that quoting lyrics was a legal no-no but I did get permission to include my favourite Super Furry Animals lyric, and the entry on Tame Impala includes a gratuitous reference to the ‘Bouncer’s Dream’ episode of Neighbours.

Overall though, I’m just really pleased with how it looks. Pete and Eoghan have done a brilliant job turning my scribbles and daubing into a beautiful book, and I hope that it communicates something of my geeky enthusiasm for music and the strange, brilliant people who make it. I didn’t get into music until friends started giving me compilation tapes in my early teens and my whole cultural landscape was transformed for the better. 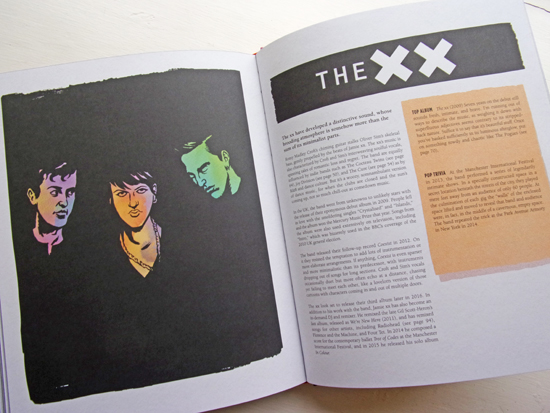 Spencer: Will this be the first in a series?

John: I’d love to do another book like this but it would be difficult to do a sequel. There were some tough decisions on who we included and who we didn’t, so there are plenty of musicians still to cover. But the really big names, your Bowies, Lou Reeds etc we’ve already done. So I think we could possibly do an expanded version but not a second volume. The format would lend itself to other subjects (a friend suggested classical composers) but I think they’d have to be written by someone else – weird pop music is the only subject that I know enough about to pull it off!

In conclusion this is clearly a project of passion, and it shines through in all aspects of the book. If you are a music fan then this is a must buy, as the information alone makes this a handy reference guide. What elevates it above finding the same information through internet searches is not only that the hard work has already been done for you, but also the illustrations included on every page. My particular favourite is The Smiths on page 46 (although I admit their music never grabbed me). A feast for the eyes, reference nutrition for the mind, and to round the experience off the author even created playlists on Spotify and Deezer to introduce you to the artists featured within. I recommend it.